A school shooter in suburban Denver was sentenced to life in prison without parole on Friday.

Devon Erickson, 20, was convicted of first-degree murder in the shooting death of classmate Kendrick Castillo, along with 45 other charges in connection with the 2019 attack at STEM School Highlands Ranch.

Castillo, 18, was hailed as a hero for trying to stop Erickson’s deadly massacre, which also injured eight people. 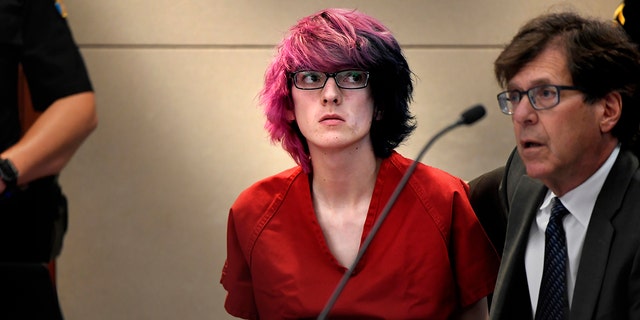 In this May 15, 2019, file photo, Devon Erickson appears in court at the Douglas County Courthouse in Castle Rock, Colo.
(Joe Amon/The Denver Post via AP)

A jury found Erickson partnered with fellow student Alec McKinney to plan the attack for weeks. McKinney testified he wanted to target students who mocked him because he was transgender.

“I don’t think there is anything I can say to you, Mr. Erickson, that would make any difference,” Slade said, adding the shooter never tried to explain his actions.

Erickson was stone-faced as the verdict was read, but his voice broke when the judge asked him if he wanted to speak, right after his family members testified that they loved him.

McKinney was sentenced to life in prison last year, but could be eligible for parole after 20 years since he was a juvenile.

The two shooters targeted a dark classroom where students were watching a movie. They entered through separate doors to maximize the carnage, and planned to have McKinney die, either by suicide or at the hands of his cohort, according to prosecutors.

The massacre was thwarted when Castillo and two other students, Joshua Jones and Brendan Bialy, charged Erickson as his gun jammed. McKinney was arrested by a security guard.

“He killed Kendrick, and he didn’t care,” Jones said in court. “I would implore you to put him in jail for as long as you can.”

“The defendant is a loser,” Bialy said. “He walked into a classroom, armed, with vulnerable students, and he lost.”

Erickson’s father, Jim Erickson, read aloud the names of the victims and apologized to the community.

“We pray for these people every day,” he said through tears.