London: Scientists are celebrating one of the “greatest finds” in British palaeontological history after the skeleton of a 180-million-year-old sea dragon was discovered in Rutland county, East Midlands, England.

Measuring 10 metres in length, and with a skull weighing approximately one tonne, the ichthyosaur is the largest and most complete fossil of any marine reptile found in Britain. 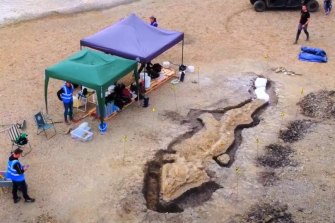 Measuring 10 metres in length the ichthyosaur found in Rutland is the largest and most complete fossil of any marine reptile uncovered in Britain. Credit:YouTube/Anglian Water

The discovery was made by Joe Davis, an employee of the Leicestershire and Rutland Wildlife Trust during a routine draining of a lagoon island at Rutland Water in February.

The animal was characterised by its large teeth and eyes and ranged in size from one to more than 25 metres. It was first identified in the 19th century by the palaeontologist Mary Anning.

Dr Dean Lomax, a palaeontologist who has studied the species, said: “Despite the many ichthyosaur fossils found in Britain, it is remarkable to think that the Rutland ichthyosaur is the largest skeleton ever found in the UK. It is a truly unprecedented discovery and one of the greatest finds in British palaeontological history.”

“Not only is it the largest ichthyosaur skeleton ever found in Britain, but it is also the most complete skeleton of a large prehistoric reptile ever discovered in the UK.”

“And yes, that includes dinosaurs,” he added.

When they first spotted the remains poking out of some clay, team members at the trust were unsure about their origins and suggested that they could simply be pipes.

After speaking to Rutland council, experts from the University of Leicester were called and the ichthyosaur skeleton was identified. 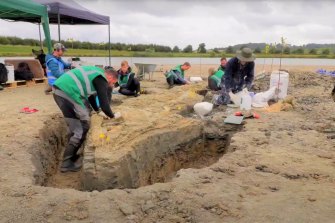 The remains were dug out by a team of expert palaeontologists from around the UK in August and September. They worked in partnership with Anglian Water, Rutland County Council and the trust and were supported by volunteers with experience in excavating fossil marine reptiles, including members of the local Peterborough Geological and Palaeontological Group.

The skeleton was also surrounded by the remains of ammonites and belemnites, squid-like animals, which may have been feasting on the animal’s remains. Scientists said that the discovery could give them a better understanding of their ecosystems.

Although two incomplete and much smaller ichthyosaurs were found during the initial construction of Rutland Water in the 1970s, experts said that it was unusual to find a specimen of this kind in the Midlands. Remains are usually found across the Jurassic and Yorkshire coast. 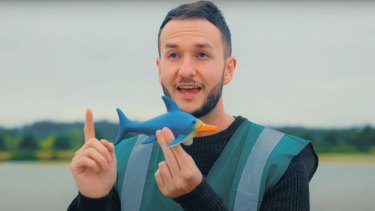 Dr Mark Evans of the British Antarctic Survey said it was a “highly significant discovery both nationally and internationally”, while Nigel Larkin, a specialist palaeontological conservator, added: “It’s not often you are responsible for safely lifting a very important but very fragile fossil weighing that much.

“It is a responsibility, but I love a challenge. It was a very complex operation to uncover, record, and collect this important specimen safely.”

The excavation of the remains will feature on BBC Two’s Digging For Britain on Tuesday.

Biden hits the links for first golf outing of his presidency