One of Australia’s top universities was told it needed to carve out its own response to Australia’s deteriorating relationship with China or its business interests would be put at risk.

The confidential report to the UNSW board was delivered months before the university was embroiled in controversy over its decision to remove social media posts by one of its academics about the erosion of human rights in Hong Kong. 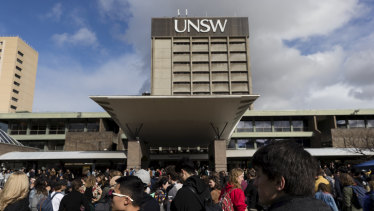 The 2019 report by an external consultant was commissioned by UNSW leadership to assess its China-related activities. It recommended the university adopt a “more assertive, forward-leaning approach to China engagement” and “position UNSW as a leading advocate for constructive engagement with China”.

It accused Prime Minister Scott Morrison of “drawing a clumsy distinction between China as Australia’s most important customer and the United States as our closest friend”.

“Australia can ill-afford for the relationship to teeter on the precipice of perpetual crisis,” the report said.

The review said heightened political and community concerns about China had the potential to erode the social licence needed for the university to maintain and grow its engagement with the Asian giant.

“The challenge is to embrace the China opportunity in nuanced ways that balance the university’s interests against the reservations of influential China critics – most notably those within Canberra’s defence and security establishment,” it said.

But it also warned that despite China being its largest source of international students, the university hosting a Confucius Institute and UNSW undertaking contracted research for two unnamed Chinese companies, there was a “darker side to China’s rise” and those criticisms could not be ignored.

“Human rights abuses, the social credit system and associated rise of a surveillance state, suppression of the Uighurs in Xinjiang, cyber intrusions, militarisation of the South China Sea – these behaviours and more serve only to strengthen the arm of those who view China as a threat to be feared and contained,” the report said.

“In crude but simple terms, powerful agencies in Canberra view China through the lens of those with little or no trust in China’s leadership.”

A UNSW spokeswoman said the recommendations from an external consultant were discussed by senior management and noted “but not necessarily adopted”.

“The situation is changing rapidly and the report was superseded by the work of the University Foreign Interference Taskforce,” she said. “In particular, we take our security and compliance obligations very seriously.”

UNSW was criticised by former education minister Dan Tehan in August after it deleted social media posts and altered an online article following an online protest from Chinese nationalists. The article was written by Human Rights Watch Australia director and UNSW adjunct lecturer Elaine Pearson who warned “now is a pivotal moment to bring attention to the rapidly deteriorating situation in Hong Kong”.

UNSW vice chancellor Ian Jacobs subsequently apologised, saying the tweet “should not have been removed”.

Universities have been heavily scrutinised by three separate parliamentary inquiries in Canberra and NSW, spanning foreign interference, censorship of diaspora communities and the future of the sector. The institutions now face having their agreements with Chinese companies or universities torn up by the federal government following the passage of new foreign veto laws last year.

The ABC first reported in September that the “China Engagement Review and Recommendations Discussion Paper” was presented to its board in August 2019, but the sensitive details of the meeting were suppressed by university management because they would “put the university at a competitive disadvantage”.

The details now reveal that it recommended greater consultation on the Defence Exports Control Act, which prevents sensitive research and technology with military applications from being sent overseas.

The review also called for the UNSW board to “consider contingency responses to a Chinese government decision to punish Australia by reducing the flow of international students and collaborative research”.

University of Sydney academic Salvatore Babones has estimated that the fees paid by Chinese students account for a quarter of UNSW’s total operating revenue.

China’s Ministry of Education warned Chinese students against travelling to Australia in June after Australia called for an independent inquiry into the origins of the coronavirus and a spike in racist attacks on Asian students.

But Hong Kong investment firm CLSA found in December that Australia’s suppression of the coronavirus was likely to have had a more significant impact on tourists and students than political messaging.

Coronavirus UK news LIVE: Holidays for Brits by next week and new laws for pubs reopening as deaths hit 43,081