Dr. Fauci says early coronavirus travel restrictions from China and Europe are ‘going to go a long way’ to prevent the US from ‘becoming an Italy’

The government’s top infectious disease expert says he remains hopeful the US is not on the same trajectory as Italy in the coronavirus struggle after figures have shown a similar pattern in increased COVID-19 illnesses.

The number of deaths of people with the coronavirus in Italy jumped 651 to 5,476 in the last 24 hours, while new infections rose by 10% to over 59,000. The head of Italy’s Civil Protection Agency, Angelo Borrelli, noted that the increases had narrowed from recent days, adding ‘we hope that this trend can be confirmed in the coming days. We should not lower our guard’.

By Sunday the US had over 30,000 confirmed infections and over 400 deaths and experts have previously noted the country is only 10 days behind the path of Italy.

Dr. Anthony Fauci, director of the National Institute of Allergy and Infectious Diseases, says the stringent measures being put in place in the US including travel restrictions, the closing of schools and many businesses and other social distancing will go ‘a long way’ to prevent the US from becoming like Italy.

Asked whether the country was on the same track he said on CBS’s Face the Nation: ‘Not necessarily.’ 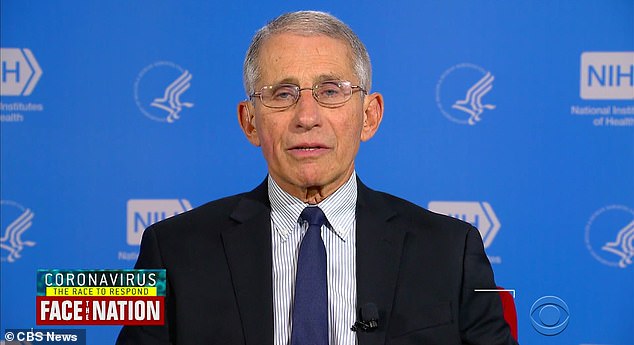 Dr. Anthony Fauci, director of the National Institute of Allergy and Infectious Diseases, remains hopeful the US is not on the same trajectory as Italy 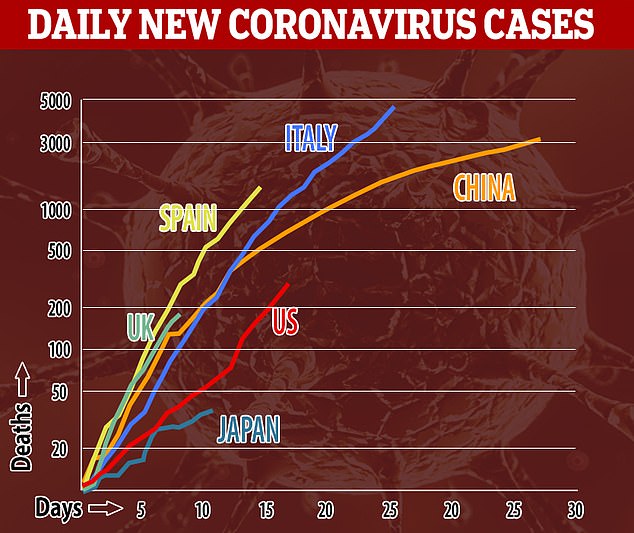 The number of deaths of people with the coronavirus in Italy jumped 651 to 5,476 in the last 24 hours, while new infections rose by 10% to over 59,000. By Sunday the US had over 30,000 confirmed infections and over 400 deaths and experts have previously noted the country is only 10 days behind the path of Italy 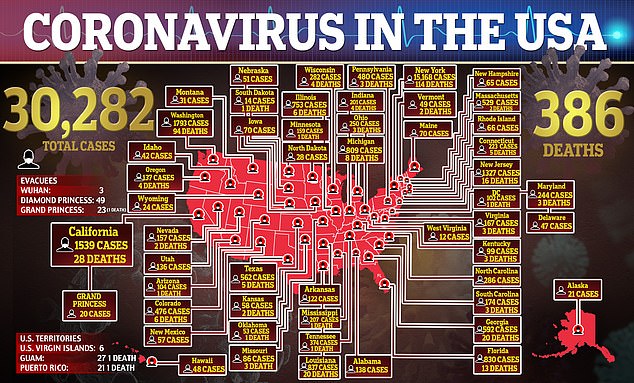 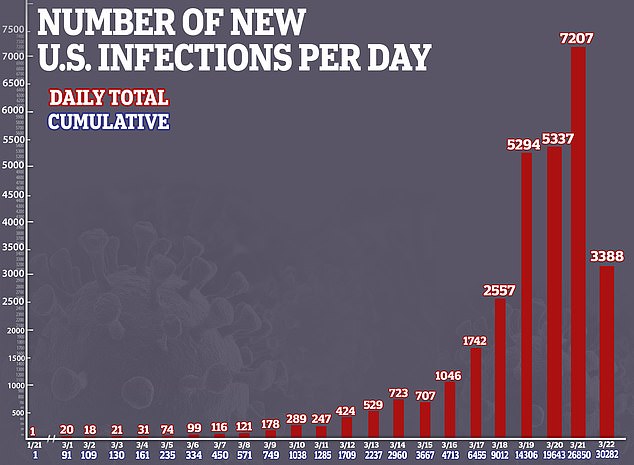 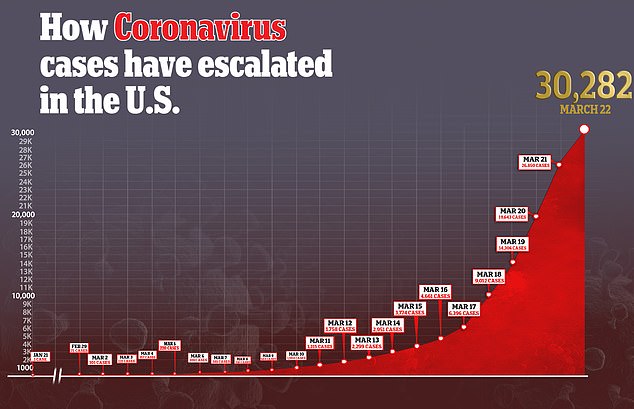 ‘Obviously, things are unpredictable. But if you look at the dynamics of the outbreak in Italy, we don’t know why they are suffering so terribly,’ Fauci said.

‘But there’s a possibility, and many of us believe, that early on they did not shut out as well the input of infections that originated in China and came to different parts of the world.’

Italy has had to turn ill people away from hospitals as they struggle to keep up with the demand for bed space and equipment for safe treatment.

In the United States New York Mayor Bill de Blasio has warned medical workers may also struggle with the increase rate of infections that has forced governors to order stay-at-home initiatives.

Fauci told CBS host Margaret Brennan that it’s hard to know exactly why Italy is ‘suffering so terribly’ but that they did not appear to shut out as well the input of infections originating from China and other parts of the world. 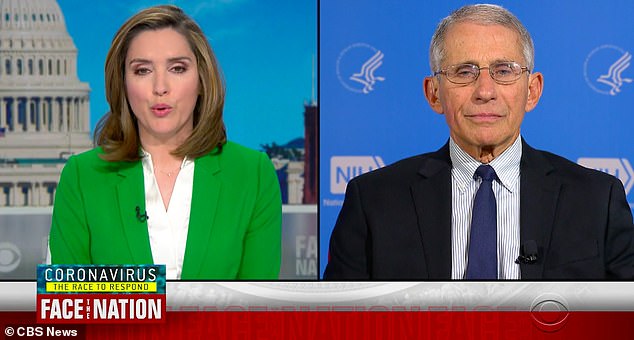 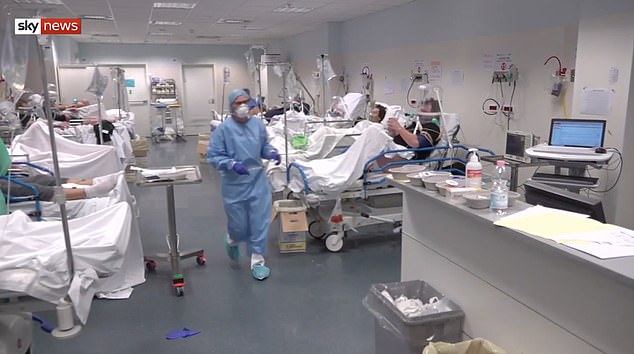 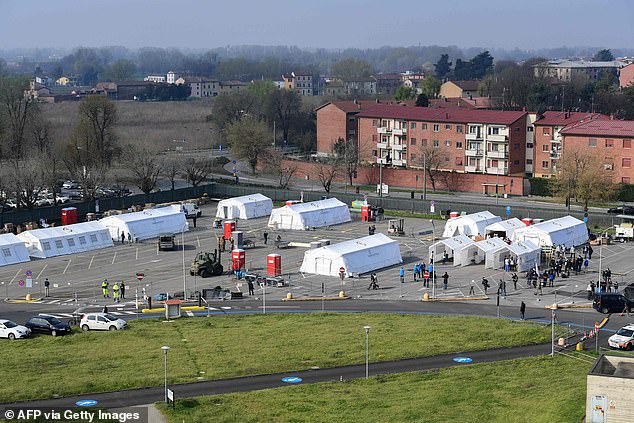 A general view taken on March 20, 2020 in Cremona, southeast of Milan, shows a newly operative field hospital for coronavirus patients, financed by US evangelical Christian disaster relief NGO Samaritans Purse. – Fully operational, the structure will consist of 15 tents, 60 beds, 8 of which will be in intensive care

Fauci told Face The Nation that what has happened in Italy – the worst hit country in the world, even surpassing Wuhan the Chinese epicenter of the virus – is not an indication their experts aren’t trained well.

‘I don’t know why this happening there to such an extent. But it is conceivable that once you get so many of these … they spread exponentially and you can never keep up with the tsunami,’ Fauci explained.

‘That’s what our dear friends and colleagues in Italy are facing. They are very competent. It isn’t that they don’t know what they’re doing… They’ve been so overwhelmed from the beginning that they cam’t play catch up.’

Fauci said the US appears to be in a better position because ‘we have from the beginning put a kind of clamper’ on the virus.

‘We’re going to get hit, no doubt about it, we see it in New York.. New York is terribly suffering,’ he admitted. ‘But the kinds of mitigation issues that are going on right now the things we’re seeing in this country… this separation, at the same time preventing an influx of cases coming in.

‘I think that’s going to go a long way to prevent us from becoming an Italy.’ 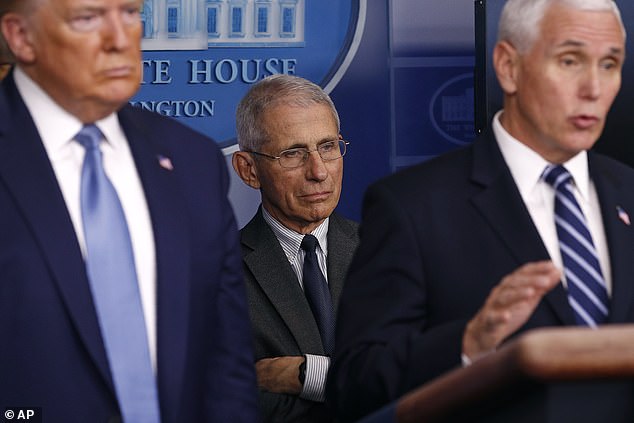 He said Trump’s travel restrictions, the closing of schools and many businesses and other social distancing will go ‘a long way’ to prevent the US from becoming like Italy

He said viruses like this will always mutated with no substantial impact on its function. Experts haven’t so far seen an changes in behavior but Fauci said they are monitoring COVID-19 closely.

March 19 – Trump claimed anti-malaria drug hydrochloroquine could be a ‘game-changer’ in the fight against coronavirus. Dr Fauci later responds: ‘There is no magic drug.’

March 13:  Trump says he does not need a test for COVID-19 despite coming into contact with a Brazilian official who was infected with the virus. Dr Fauci stated that it would be advisable for Trump to take a test

March 4: Trump tells pharmaceutical executives he hopes for a coronavirus vaccine in ‘three to four months’. Dr Fauci  responds: ‘A vaccine that you make and start testing in a year is not a vaccine that’s deployable’

It was as the host brought up the unexpected number of young people being affected.

Fauci said he have to make sure that the demographic is not young people with ‘underlying conditions’ because with them ‘all bets are off’.

But with young people who don’t have underlying conditions, we have to look into why we’re seeing it here but not in China.’

President Trump this week gave new hope about curbing the illness with an anti-Malaria drug and Fauci appeared to quash his claim. But Fauci added Sunday that he wasn’t slamming the leader.

‘I, on the other side, have said I’m not disagreeing with the fact anecdotally they might work, but my job is to prove definitively from a scientific standpoint that they do work,’ he clarified.

‘So I was taking a purely medical scientific standpoint and the president was trying to bring hope to the people.’ 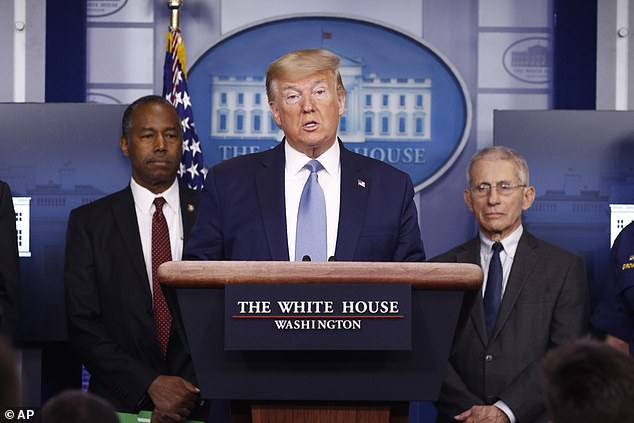 President Trump (center) this week gave new hope about curbing the illness with an anti-Malaria drug and Fauci (right) appeared to quash his claim. But Fauci added Sunday that he wasn’t slamming the leader

Everything you need to know about coronavirus

By Natalie Rahhal, Acting US Health Editor for DailyMail.com

HOW DANGEROUS IS CORONAVIRUS?

About 14 percent of people who contract the Covid-19 coronavirus are taken to hospital – with severe symptoms including breathing problems and pneumonia. About 5 per cent need intensive care.

But the majority who get the virus suffer nothing more than a cough and may never know they are infected.

So far, some 51,000 people around the world have already recovered from coronavirus – and that just includes the numbers who received a diagnosis.

HOW MANY PEOPLE DIE?

Officially, the death rate so far has been just over three percent. But experts believe the true mortality rate is probably between one and two percent. This is because most mild cases have not been picked up by doctors or reflected in the official numbers – so the death rate is inflated.

HOW DOES THIS COMPARE WITH OTHER DISEASES?

Seasonal flu kills roughly 0.1 percent of people. So Covid-19 is between 10 and 20 times more fatal.

But it is far less dangerous than SARS – the virus that ripped across China in 2003 – which killed 10 percent of patients.

Yes, but not dramatically. The best estimates suggest every person with Covid-19 passes it on to 2.6 people, on average. For flu that number is 1.5.

CAN IT BE SPREAD WITHOUT SYMPTOMS?

Initially scientists feared carriers who had no symptoms could pass it on. That is now in doubt.

What is likely, however, is those who have mild symptoms are putting it down to a cold and going about their normal lives – which puts others at risk.

HOW LONG IS IT BEFORE SYMPTOMS APPEAR?

Again, unclear. Initially scientists said this could take up to two weeks.

But recent evidence suggests the incubation period could be as long as a month – particularly among children.

The average, however, is much shorter. A Chinese study said the average period of symptom onset was 5.4 days for adults and 6.5 for children.

WHO IS AT RISK?

The virus can affect anyone – with a study of the first 41 infected people revealing two thirds did not suffer from any pre-existing condition. But the middle-aged are most likely to get it – 78 percent of those infected in China have been aged 30 to 69.

WHAT ABOUT THE OLD?

WHO ELSE IS VULNERABLE?

Those with other conditions – such as diabetes, heart disease, high blood pressure and kidney problems – are likely to suffer severe complications if they become infected.

Children seem to be low-risk. Less than 1 percent of the Chinese cases have been under the age of ten – and if children do get the virus it’s often a mild form.

They do, however, retain the virus for longer than adults.

A study last week found the virus was still present in the stools of some children for a month after they contracted it.

Men are marginally more likely to get the virus than women. It is not clear why this is.

HOW DO DOCTORS TEST FOR COVID-19?

Anyone who has symptoms –particularly if they have travelled to an at-risk area – are told to call ahead to their health care provider, local emergency department or clinics.

This way, health care providers can be prepared, wearing masks, gloves and other personal protective equipment when they meet the possible patient and escort them to isolated areas of the facility.

They are tested using a cheek swab which is sent off for analysis at one of 12 Public Health England labs, a process that takes between 24 and 48 hours. Any positive test is double-checked at the main PHE lab in Colindale.

WHAT TREATMENT DO PATIENTS GET?

There is little doctors can do to tackle the virus, but they can treat the symptoms – such as fever and respiratory problems. Antivirals and antibiotics are also used, mainly to keep secondary problems at bay.

In the most serious cases patients are put on life-support equipment.

There are several clinical trials for potential coronavirus treatments ongoing worldwide, including one in Nebraska, where at least 13 patients are in quarantine, including two in biocontainment units.

WHAT ABOUT A VACCINE?

Even though the Wuhan virus appeared only a few weeks ago, 20 teams around the world are already manufacturing vaccines.

Chinese authorities provided the DNA code for the virus early on in the outbreak, enabling scientists to get to work straight away.

At least 30 companies and research institutions in the US are racing to make a vaccine.

Last week, one of these companies, Moderna, shipped its candidate vaccine to the US, signalling the shot was ready to begin clinical trials.

Even so, US health authorities say it will likely be upwards of a year before a vaccine is actually ready.

What time is today’s coronavirus press briefing on Thursday, May 7? – The Sun

Revealed: the best wine to drink with your favourite pizza

Feeling pressured to socialise as lockdown lifts? Here’s how to tell your friends you’re not ready