Home » World News » Coronavirus vulnerability in North Korea is of deep concern: US

Seoul: According to the United States, North Korea is scrambling to strengthen quarantine and combat the spread of coronavirus, following the explosion of infections in China that killed hundreds and sickened tens of thousands.

The US has expressed "deep concern" about North Korea's vulnerability to the outbreak of COVI-19 and says it's ready to support efforts by aid organisations in the repressive nation. 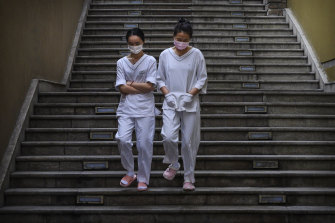 Women wear protective masks as they walk to a break at a shopping mall in Beijing.Credit:Getty

North Korea has yet to report a case of the new virus, but state media reports have hinted that an uncertain number of people have been quarantined after showing symptoms. Experts say an epidemic in North Korea could be dire because of its chronic lack of medical supplies and poor healthcare infrastructure.

"We strongly support and encourage the work of US and international aid and health organisations to counter and contain the spread of coronavirus in the DPRK," State Department spokeswoman Morgan Ortagus said in a statement, referring to North Korea by its formal name, the Democratic People's Republic of Korea.

"The United States is ready and prepared to expeditiously facilitate the approval of assistance from these organisations." 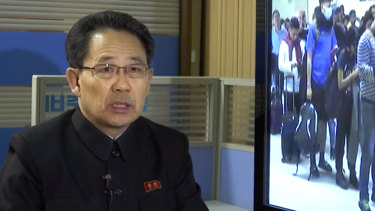 North Korea’s Ministry of Health Director Kim Dong Gun talks about the country’s efforts to contain the spread of the new coronavirus.Credit:AP

North Korea has banned foreign tourists, intensified screening at airports, harbours and border areas, and mobilised some 30,000 health workers to monitor residents in a tough campaign to prevent the spread of the virus, which state media has described as a matter of "national existence". The North also had rival South Korea withdraw dozens of officials from an inter-Korean liaison office in the North Korean border town of Kaesong, insisting on closing it until the epidemic is controlled.

The North this week also announced it would impose a month-long quarantine for all foreign visitors and others suspected to have the virus. The report by state media didn't confirm the country's previous quarantine period, but the Russian Embassy in Pyongyang said in a Facebook post earlier this month that North Korea was putting foreign visitors under a 15-day quarantine.

"All the institutions and fields of the state and foreigners staying in the DPRK should obey it unconditionally," the Korean Central News Agency (KCNA). "The spread of the epidemic comes to be a serious problem with the possibility of international disaster."

South Korea, which has reported 28 cases of the virus, said there was a need for inter-Korean cooperation to contain the spread of the disease.

On Friday, Cho Hey-sil, spokeswoman of Seoul's Unification Ministry, which deals with inter-Korean affairs, said her government would consider public opinion before deciding whether to formally propose joint quarantine efforts with the North.

North Korea has virtually suspended all cooperation and diplomatic activities with the South in past months amid a standstill in large nuclear negotiations with the United States, which have faltered over disagreements in easing sanctions against it in exchange for disarmament steps.

Employees at Stella’s Osborne restaurant vote in favour of unionizing

Girl, 15, and Boy, 14, Who Were Tragically Killed in California High School Shooting Identified

Suspect arrested in killing of dentist outside his practice