Lava, honour and obey! Couple get married beneath dramatic plume of ash as volcano erupts behind them in the Philippines

A Filipino couple did not let their wedding get foiled by nature as they went ahead with tying the knot, against the backdrop of the ash-spewing Taal volcano on Sunday.

Despite the threat posed by one of the Philippines’ most active volcanoes, Chino Vaflor and Kat Bautista Palomar went ahead with their wedding ceremony – as steam and ash rose high into the sky behind them.

Wedding photographer Randolf Evan told the BBC there was ‘no prior notice at all’ that the volcano was stirring. 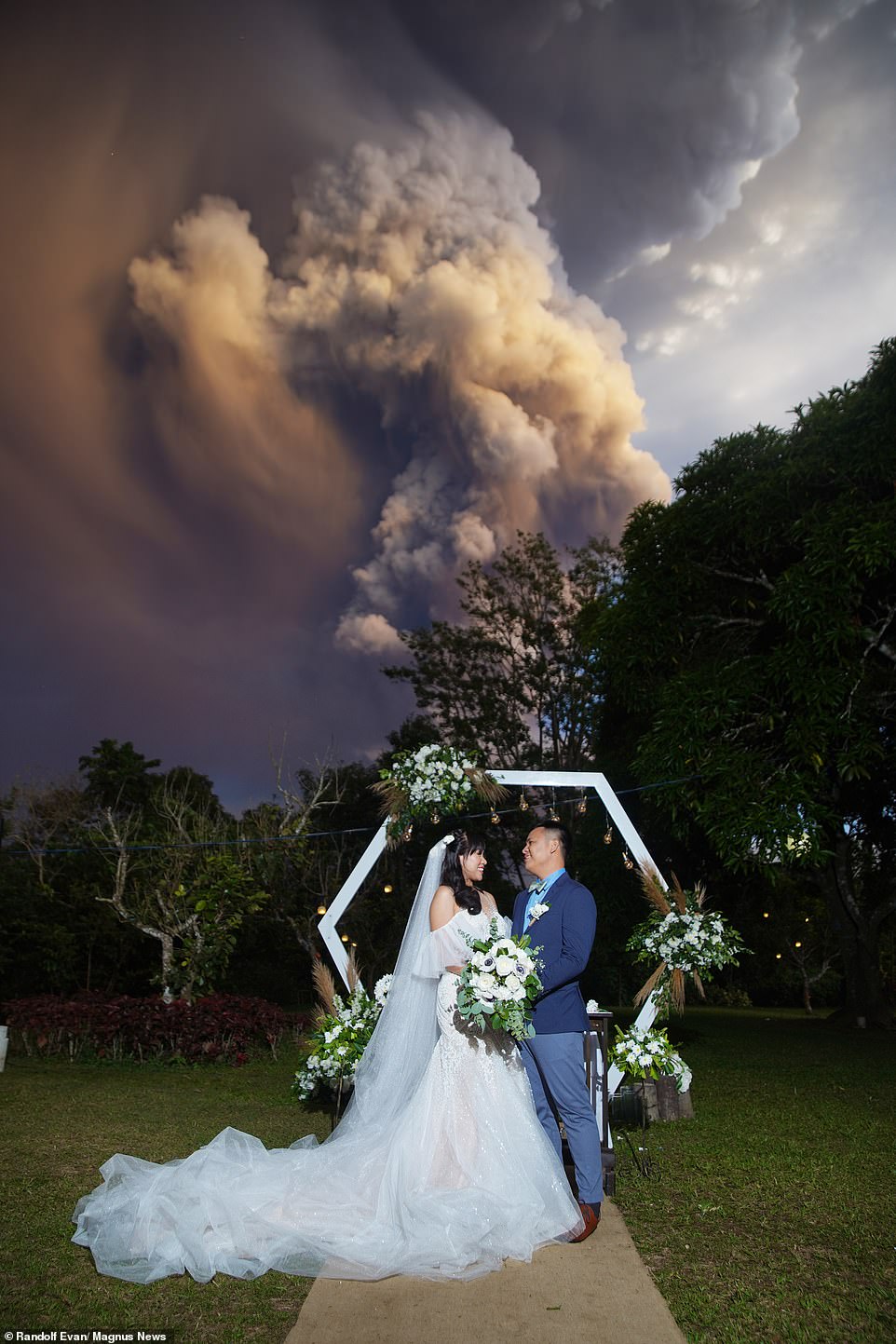 The happy couple as they got married at the Savannah Farm, Alfonso, in the Philippines. Large plumes of ash from the Taal volcano can be seen clearly spewing into the skies above the couple 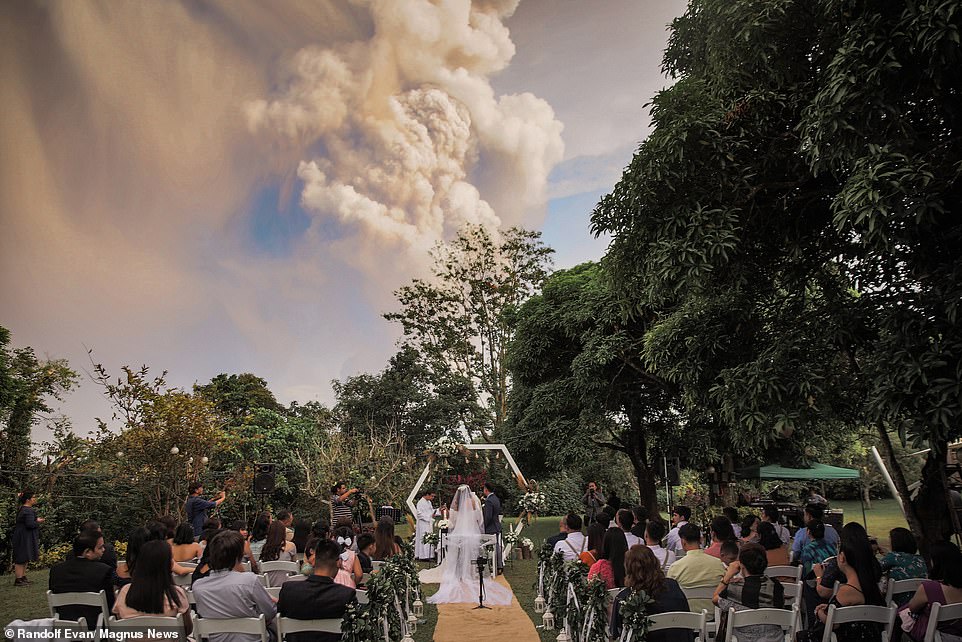 Randolf Evan, a photographer at the wedding ceremony, said despite the clearly restless volcano it did not feel unsafe

‘We noticed white smoke coming out of Taal during preparations around 2pm and from then on we knew something unusual was already going on with the volcano,’ he said.

Later in the afternoon Filipino authorities raised the alert to the second-highest level as they warned an ‘explosive eruption’ could take place in as little as a few hours.

The estimated 450,000 people living within the nine mile radius of the volcano were told to leave.

But despite the warning, the wedding celebrations took place at its planned venue – at the Savannah Farm, Alfonso, only six miles from the volcano.

Mr Evan said everyone felt safe to stay as the venue was on higher ground.

‘Surprisingly everyone was calm and relaxed. It was an intimate wedding so guests were mostly the couple’s family and close friends, and thus nobody really left,’ he said.

‘We could feel the ash raining on our clothes,’ Mr Evan said. ‘But it didn’t feel alarming until night time came when it became a bit heavier and mud-like.’ 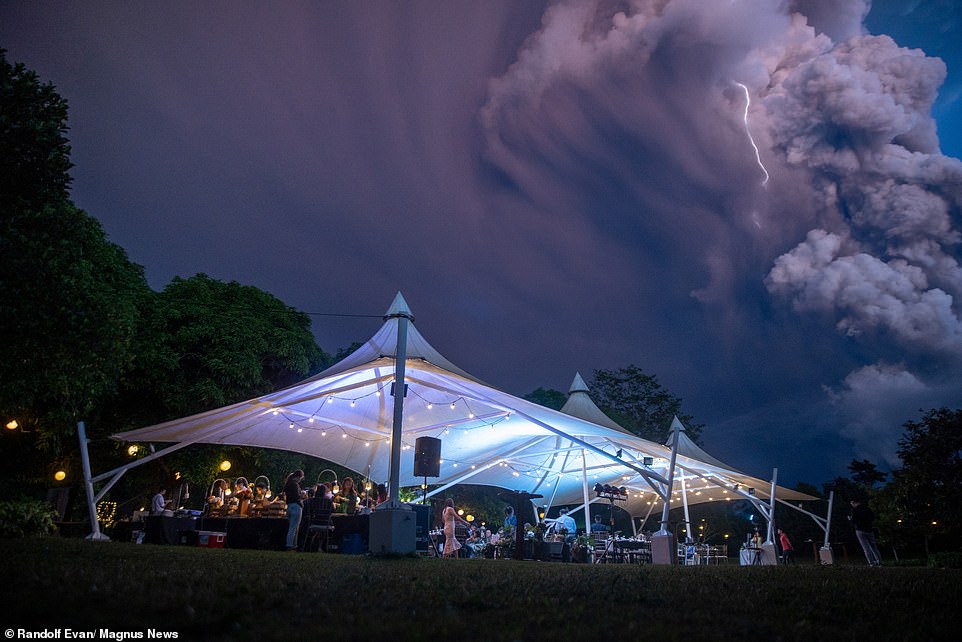 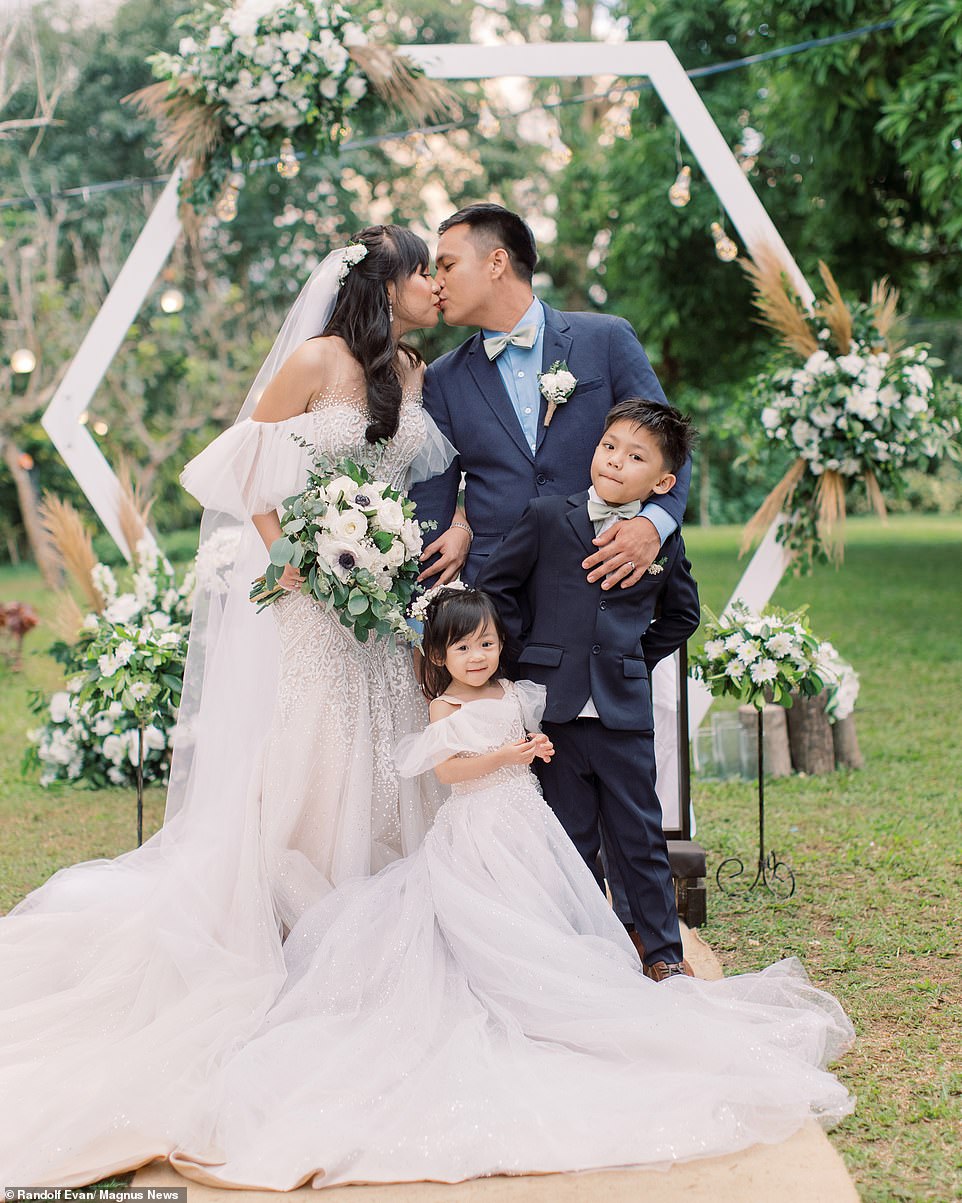 The happy couple can be seen shortly after their wedding, in a happy family portrait with their two young children

What is volcanic lightning?

Lightning sometimes forms during volcanic eruptions, creating spectacular scenes such as those in the Philippines last night.

The phenomenon was observed as long ago as AD 79 during the eruption of Vesuvius which destroyed Pompeii.

Why this happens is less clear, and even scientists have described it as ‘mysterious’. The lightning does not originate from a thunderstorm, nor does it come from inside the volcano.

A 2016 study suggested that ash particles split apart and scrape against each other during an eruption, creating friction and a build-up of electric charge.

Eventually the electricity is discharged to the ground in the form of lightning.

The development of ice crystals – which can happen at the top of the ash plume during a volcanic eruption – is also believed to contribute to the lightning strikes.

Scientists say the lightning strikes are usually confined to the cloud of ash, so are unlikely to threaten humans, but have been known to start forest fires.

Guests shared photos on social media of the festive event against the dramatic backdrop of the ever-restless volcanic cone and its growing cloud of steam and ash.

Other images showed lightning striking inside the vast plume of steam that loomed into the skies above the venue.

However, on Monday, the volcano appeared to get more volatile with fountains of lava seen gushing from it; and clouds of ash blowing more than 60 miles north of it, into the nation’s capital, shutting down its international airport.

The photographer said the wedding party and guests were all now safely out of the danger zone.

Today authorities raised the danger of an eruption to level 4 – meaning an imminent hazardous eruption is expected.

Lightning crackled in the smoke while a series of earthquakes rattled the area and authorities have warned of a further ‘explosive eruption’ which could even trigger a tsunami surging across the lake.

Stunning lightning shows have also periodically played out above the volcano in a little-understood phenomenon that is attributed to static electricity. 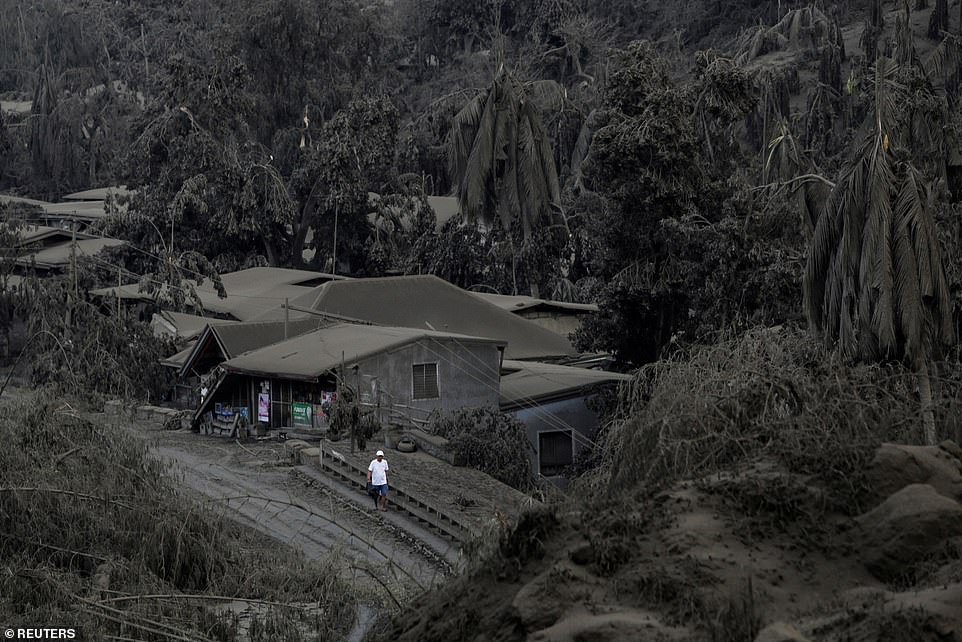 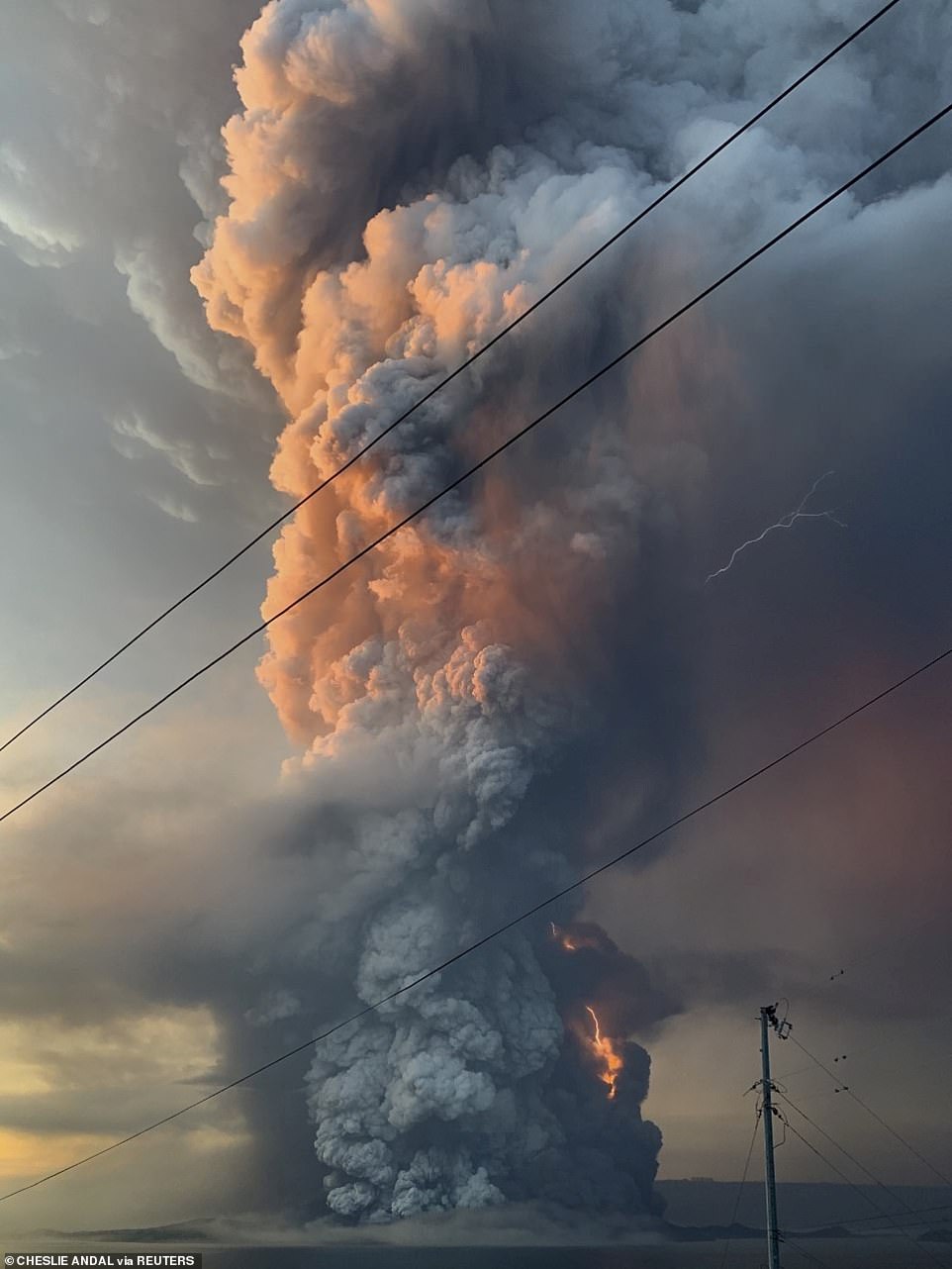 Scientists recorded magma moving towards the crater of Taal, which is located 45 miles south of Manila, but were unable to say how long it would continue to rumble.

There have been no reported casualties, but authorities have also been scrambling to evacuate more than 6,000 villagers from the volcanic island which is located in the middle of a lake – a popular tourist spot.

Taal sits in a picturesque lake and is one of the most active volcanoes in a nation where earthquakes and eruptions are a frightening and destructive part of life.

The country’s volcanology institute says the small island where the volcano lies is a ‘permanent danger zone,’ although fishing villages have existed there for years.

It asked nearby coastal communities ‘to take precautionary measures and be vigilant of possible lake water disturbances related to the ongoing unrest.’ 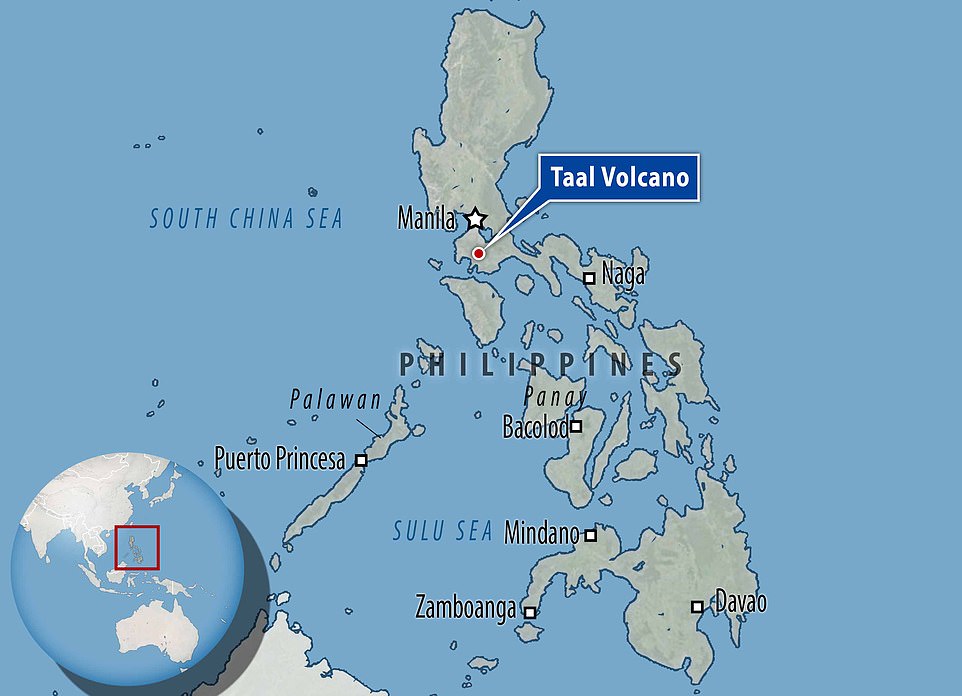 The volcano is located in a lake on the country’s island of Luzon, where the capital of Manila is also located 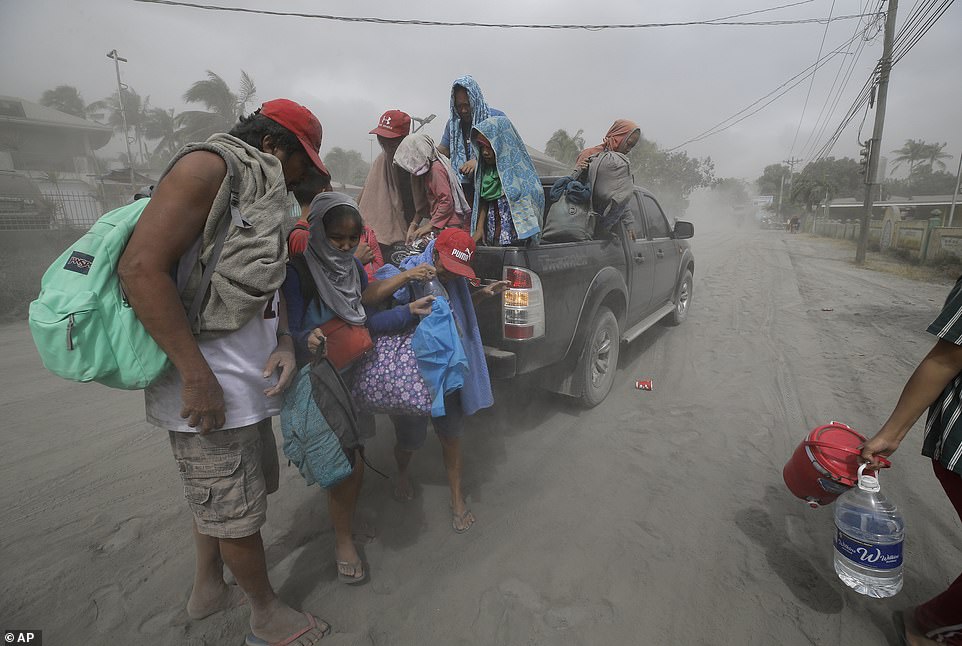 A family can be seen covering their heads and faces in towels as ash continues to fall in Lemery, Batangas. So far more than 13,000 villagers have moved into evacuation centers

Police reported that more than 13,000 villagers have so far moved to evacuation centers in the hard-hit province of Batangas and nearby Cavite province.

The current evacuation numbers are likely higher and officials expect the number to swell with hundreds of thousands more being brought out of harm’s way.

Taal’s last eruption was in 1977. The most powerful explosion in recent years was the 1991 eruption of Mount Pinatubo, about 100 kilometres northwest of Manila, which killed more than 800 people.