Current COVID shots provide a high level of protection against hospitalization and death, according to a summary of the efficacy of eight vaccines that showed the Pfizer jab may better at stopping at least two worrisome coronavirus variants.

Efficacy against COVID-linked disease averaged about 85% after a full course, rising to almost 100% protection against severe disease, hospitalisation or death, Julia Shapiro, Natalie Dean, Ira Longini and colleagues said in a paper released on Friday before peer-review and publication. 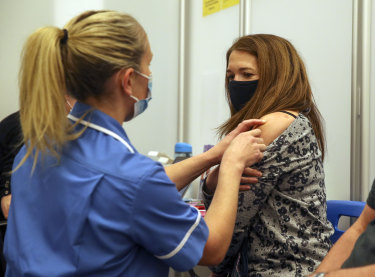 A woman receives the Moderna vaccine in England. Credit:PA

Protection against any disease with infection for three so-called variants of concern averaged 86% for the B.1.1.7 strain first detected in the UK., 61% for the P.1 strain that drove an explosive outbreak in Brazil, and 56% for the B.1.351 strain discovered in South Africa, the University of Florida researchers said.

Vaccine efficacy was estimated for immunisations that are being rolled out on local and global scales, they said. These include the Pfizer, Moderna, Johnson & Johnson, AstraZeneca, “Sputnik”, Novavax, Sinovac Biotech, and Sinopharm Group products.

“Some of the estimates are based on rigorous, pre-planned statistical analyses from double-blinded, placebo-controlled trials, while others are extracted from observational studies with different levels of control,” the researchers said.

Fla. Mom Who'd Just Celebrated Birthday Is Killed, and Suspect Is Teenager She Was 'Trying to Help'