London: British Prime Minister Boris Johnson was on Monday pondering a second national lockdown as an accelerating coronavirus outbreak threatened to destroy any shoots of economic recovery and send millions back into isolation.

The United Kingdom already has the biggest official COVID-19 death toll in Europe – and the fifth largest in the world – while it is borrowing record amounts in an attempt to pump emergency money through the damaged economy. 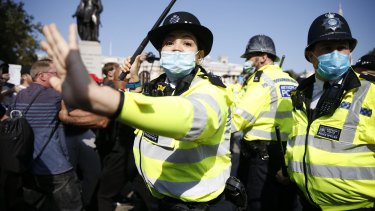 Protestors clash with police during an Anti-Vax rally at Trafalgar Square at the weekend. Credit:Getty

But new COVID-19 cases are rising by at least 6000 per day in Britain, according to week-old data, hospital admissions are doubling every eight days, and the testing system is buckling.

"The trend in the UK is heading in the wrong direction and we are at a critical point in the pandemic," Chris Whitty, the government's Chief Medical Officer, will say at a briefing on Monday morning, local time.

"We are looking at the data to see how to manage the spread of the virus ahead of a very challenging winter period," Whitty will say alongside Patrick Vallance, the chief scientific adviser.

Transport Secretary Grant Shapps said the United Kingdom was at a critical juncture though any new lockdown would have to be balanced with schools and businesses allowed to stay open so that the country could pay for the crisis.

"We're certainly at a very critical moment this morning," Shapps told Sky. "It is clear that we are just a few weeks behind what we're seeing elsewhere in Europe."

"It is very important that we do everything we can to sort of bear down on this," Shapps said. "We'll hear from others including the prime minister on the proposed next steps."

Downing Street has meanwhile denied a newspaper report that Johnson went to Italy last weekend, saying he had not travelled to the country in recent months.

Italian newspaper La Repubblica said Johnson was seen in Perugia from September 11 to 14, citing a statement from the city's airport. It reported that he had travelled there to baptise his young son Wilfred.

"This story is completely untrue," a spokesman for Johnson's Downing Street office said. "The Prime Minister has not travelled to Italy in recent months. Anyone who publishes these claims is repeating a falsehood."

"As I understand it, it is completely untrue. I double checked this morning and it is an erroneous story."

Rare double waterspout spins through the sky in southern Thailand