DAILY MAIL COMMENT: Give Ukraine tools it needs to finish the job

When Russian tanks rolled into Ukraine exactly 11 months ago, most of the world expected only one outcome.

President Volodymyr Zelensky’s forces would be routed in the face of a vastly superior enemy. Moscow would install a puppet government in Kyiv. And the West, addicted to Russian oil and gas, would wring its hands and look the other way.

How wrong those predictions turned out to be. Thanks to the stirring courage of its troops and the help of Nato – galvanised into action by Boris Johnson – Ukraine has defied Vladimir Putin’s invasion.

Indeed it is now on the offensive and recapturing ground conceded in the early part of the campaign. But its heroism has come at a terrible cost. 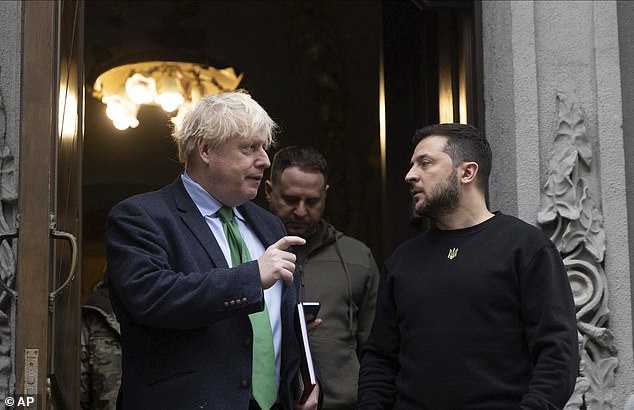 Russia’s pitiless barbarism summons up the ghastly shades of both world wars.

Massacre, torture and rape are once again deployed as weapons of mass terror. On parts of the front line, the conflict has descended into trench warfare, with soldiers on both sides living ankle-deep in cloying mud.

This bloody war has had consequences across the globe. Energy and food prices have soared, leading to an inflation spike which has devastated the world economy.

But while everyone prays for a speedy solution, it must be just. The West must not succumb to fatigue and allow Putin to succeed in his brutal expansionism.

If Ukraine were to fall, he would soon be eyeing up the Baltic states, as part of his stated ambition to reconstitute the Soviet Union. China, too, would be emboldened in its hostile claim to Taiwan and despots around the world would celebrate.

Mr Johnson’s visit to Kyiv was not just a gesture of support but also a reminder to Nato and the EU of their moral obligations to this imperilled democracy.

In an evocative and hugely powerful piece for today’s Mail, he describes witnessing chilling evidence of Russian atrocities. It’s hard to read but drives home his point.

‘With every day that goes by, more innocents are sacrificed, more brave Ukrainian soldiers are killed,’ he writes.

‘What conceivable grounds can there be for delay? Why are we not giving the Ukrainians all the help they need, now, when they need it?’

Germany must authorise the tank deliveries it has been vacillating over and other allies must provide the technology and materiel Ukraine is pleading for.

This is nothing less than a fight for freedom and democracy. Mr Johnson understands that, and so should the whole of the civilised world. Tyranny cannot be allowed to prevail.

Despite sub-zero temperatures, the flood of cross-Channel migrants continues apace, with 442 arriving on Sunday alone.

Many, especially those coming from Albania, are not genuine refugees. Some are dangerous criminals, as the murder conviction of Lawangeen Abdulrahimzai yesterday starkly demonstrated.

Originally from Afghanistan, 21-year-old Abdulrahimzai falsely claimed to be 14 on arrival here in 2019, was already on the run after killing two men in Serbia, had a drug-dealing conviction in Italy and had been refused asylum in Norway. Yet he was able to enter Britain and live here unchecked.

In March last year, he stabbed a man to death in Bournemouth in a row over an e-scooter – another tragic consequence of Britain’s porous borders.

One of Rishi Sunak’s five pledges this month was to make sure that those who come to this country illegally are ‘detained and swiftly removed’.

The Mail doesn’t doubt the sincerity of his desire to end cross-Channel migration. But with 80,000 expected to make the trip this year, the time for mere words is past. We need radical action, now.