Just hanging around! Daredevil does pulls-ups and dangles ONE-HANDED from a 280ft crane as it sways in the wind in Istanbul

This is the moment a daredevil climbed a swaying 280ft crane in the centre of Istanbul and pulled off some risky stunts.

Khalid Tenni, 26, from Morocco carried out the epic climb and dangerous tricks alongside his friend Tony Mounir on New Year’s Day.

Footage posted onto Khalid’s Instagram page shows the adrenaline junkie, who has previously carried out similar stunts, performing pull-ups and even dangling from the huge crane as it sways in the wind. 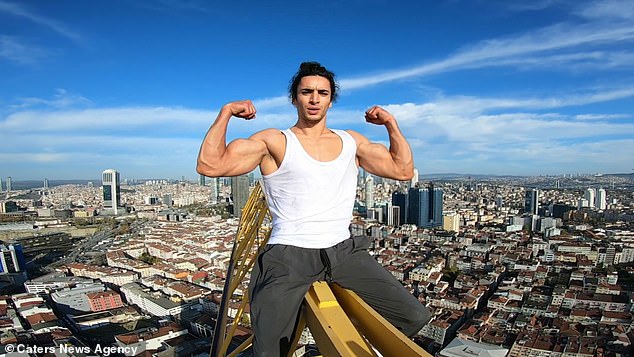 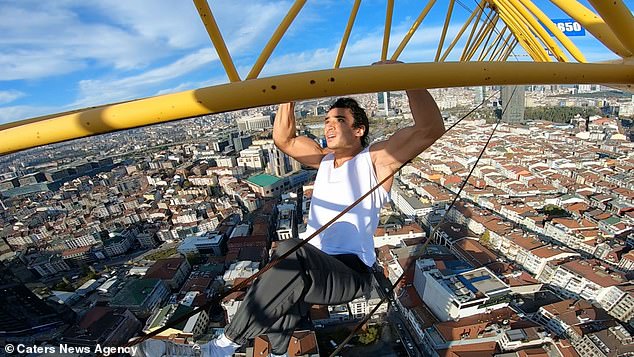 The video shows Khalid filming himself walking along the crane with the city hundreds of feet below him.

Tony then takes over the filming as Khalid, dressed in a white vest and black trousers, lowers himself down a gap in the crane, while holding onto a central pole.

His friend tells him to ‘be careful’ before Khalid releases his left hand and dangles one-handed for a couple of seconds while gesturing towards the camera.

After again being told to ‘be careful’, Khalid then does four pull-ups and kicks his feet in the air.

Later in the video, Khalid, still hanging from the bar, performs another seven pull-ups to the excitement of his friend and continues hanging above the busy city below.

Eventually, the daredevil pulls himself back up onto the crane. Both he and his friend managed to get down safely.

Khalid said: ‘To reach this crane it was difficult to get in as there were cameras everywhere.

‘I climbed onto the crane and as we went up the wind was getting stronger. So much so that the crane started to move and the wind speed was incredibly strong.

‘I did a bunch of very serious, dangerous exercises at the top, without any safety measures.

‘I hung from the crane with one arm, did a pull-up exercise.

‘This is a very hardcore workout!’

Afterwards, Khalid posted the video onto his Instagram page where it has attracted almost 18,000 views since January 1 as well as comments from people questioning how he did it.

One person said: ‘I can’t watch this stuff in 2022 or else it will blow my anxiety out the water.’

Another added: ‘I get sick when I look downwards. Great performance of Khalid! Congrats!’

Others urged the daredevil to ‘please be careful’ while another said just watching the video made their hands sweaty.

Khalid has previously carried out daredevil stunts including handstands and somersaults on a 260ft-high building in Morocco, as well as hanging from the edge of a building with his hands and jumping across a 330ft high drop. 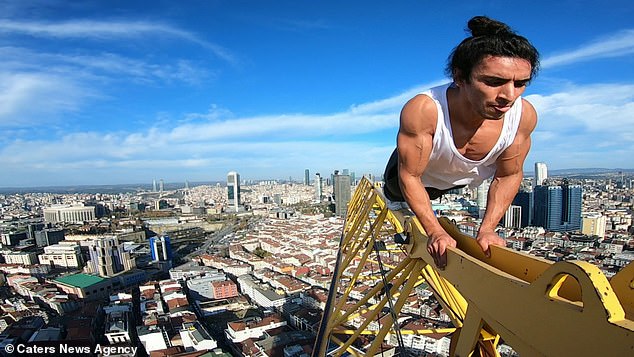 Khalid also performed a plank on top of the crane as it swayed in the wind 280ft above Istanbul, Turkey 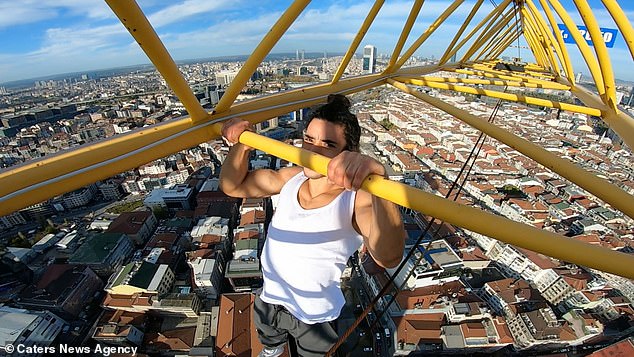 Khalid, from Rabbat, previously said everything he needed for a shredded physique could be found on the streets around his home.

The skilled stuntman trains up to eight hours a day and practises on rooftops because there is not a gym near him.

Some of his other crazy stunts have included monkey push-ups around a roof without any safety equipment, jumping from one building to another and front flips.

In 2019, Khalid said: ‘These can be death-defying stunts but the feeling of freedom is worth it.

‘I’m lucky to have never been seriously injured.

‘I’ve broken my finger when landing from a jump.

‘I plan my stunts in advance and every day I aim to achieve a new move, such as backflips.

‘Not only do you do amazing things with your body, but you also break mental barriers and look at the world around you so much differently.’