David Dimbleby has urged the BBC to slash the number of executives it employs.

In a stinging attack on the Corporation yesterday, the veteran broadcaster claimed that although the BBC was ‘brilliant’, it had ‘far too many’ managers and instead needed more people like Radio 4 Today programme hosts John Humphrys and Mishal Husain.

His comments come a week after The Mail on Sunday revealed that the BBC had awarded bumper pay rises of up to 30 per cent to bosses at the same time as it is assessing whether to continue handing free TV licences to viewers over 75. 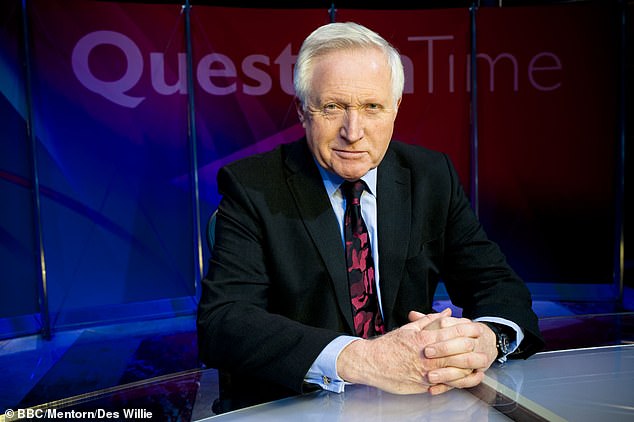 Dimbleby, who was guest editor of yesterday’s Today programme, also said he had no regrets about stepping down as the host of Question Time after 25 years – he presented his final show earlier this month.

And he revealed that he had applied for the posts of BBC director-general and chairman in recent years, adding: ‘I had very strong views about the BBC and how it should develop.’

In a light-hearted section of the show, Humphrys suggested to Dimbleby that he was posh.

Dimbleby replied: ‘John, there is a typical sneer in that question. I am about as posh as you are. I come from Wales, as you do.’