A destructive tornado has hit Alabama, trapping people in their homes, damaging buildings and downing trees as a major winter storm blankets parts of the Midwest.

The tornado hit in Fultondale about 10:30pm, with Jefferson County under a watch until 1am. It caused significant damage and multiple people were trapped in buildings and cars, according to the city’s fire chief.

Fultondale Mayor Larry Holcomb said that at least 20 people have suffered minor injuries as a result of damage caused by the tornado.

Meanwhile, drivers were left stranded in their cars overnight as the interstate, I-65, was closed overnight.

It comes as a major winter storm blanketed parts of the middle of the country with snow that was forecast to continue into late Tuesday in some areas, disrupting traffic and closing some coronavirus testing sites.

The National Weather Service said at least 4 inches of snow is expected across most of an area stretching from central Kansas northeast to Chicago and southern Michigan. Parts of southeast Nebraska and western Iowa could get more than three times that much by Tuesday morning.

The tornado that touched down in Fultondale, Alabama is illuminated by lightning. It left people trapped in their homes, damaged buildings and downed trees It caused significant damage and multiple people were trapped in buildings and cars, according to the city’s fire chief 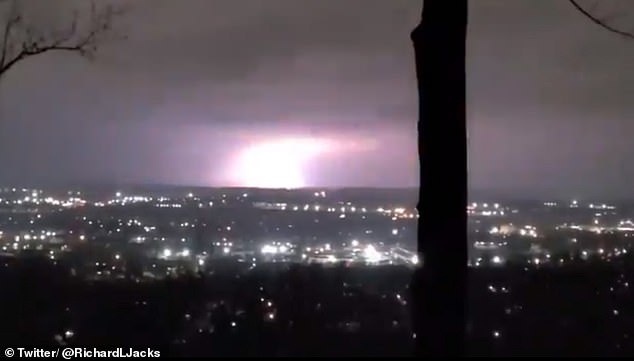 Lightning can be seen piercing the night sky as a tornado move through Birmingham, Alabama 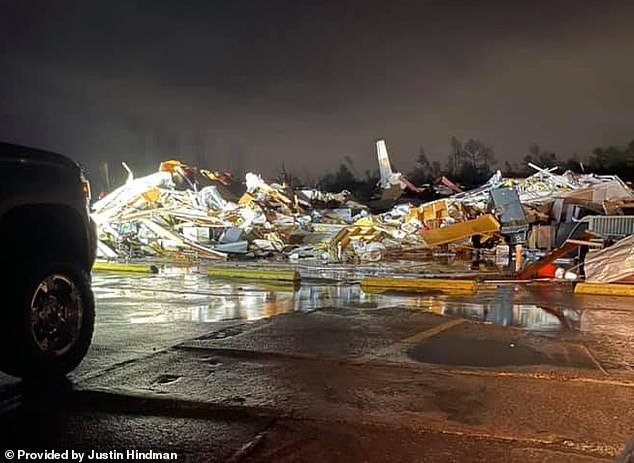 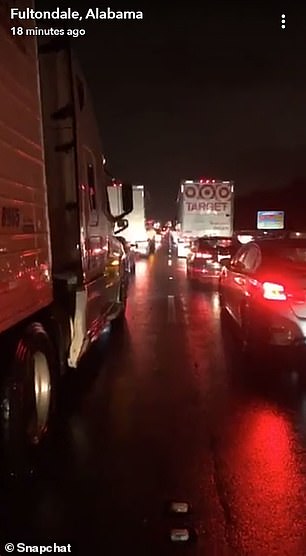 The Interstate I-65 was closed early on Tuesday morning in Fultondale, Alabama with extreme weather in the area 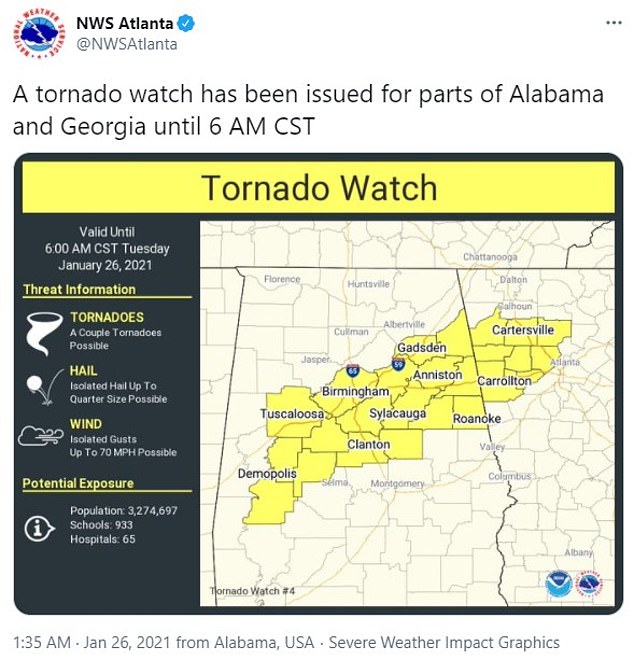 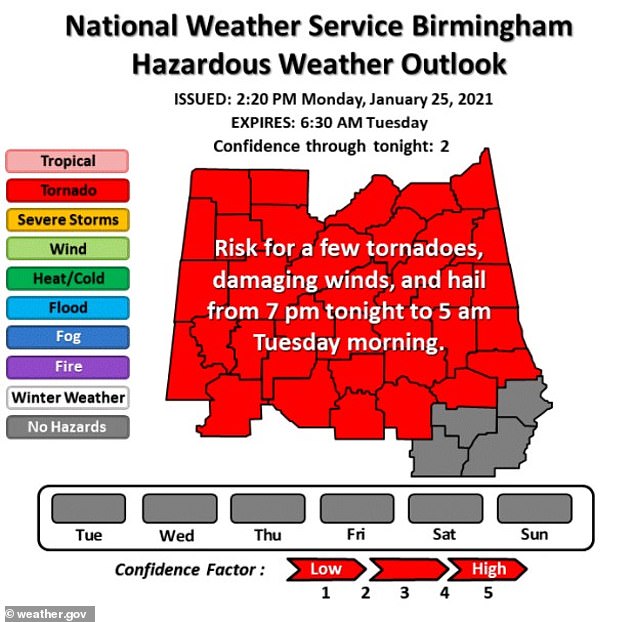 A powerful winter storm is moving across the United States, with snow blanketing the Midwest, and heavy winds hitting other parts of the country

The weather service forecast the light snowfall that began around sunset Monday in northern Illinois was expected to get heavier overnight, with accumulation totaling about 3 to 6 inches by early Tuesday. Meteorologist Bett Borchardt forecast snowfall could total up to 8 inches  or more before it ends Tuesday evening.

The last comparable snowfall in the area occurred in November 2018, when 8.4 inches of snow fell.

A winter weather advisory was issued Monday for northwest Indiana, where the weather service forecast 3 to 5 inches of snow by the time the storm leaves the area Tuesday. A mix of freezing drizzle was expected in the southern parts of the region.

The break in the relatively mild winter in northern Illinois may mean the rest of the season could be more active, said weather service meteorologist Matt Friedlein.

‘Now, more active does not necessarily mean more snow,’ Friedlein told the Chicago Sun-Times. ‘If we stay on the milder side of things, that could be more rain or more mixed precipitation.’ Willie Strickland, 26, of Omaha, walks in the middle of 38th Street to avoid walking through snow on unshoveled sidewalks in Omaha, Nebraska 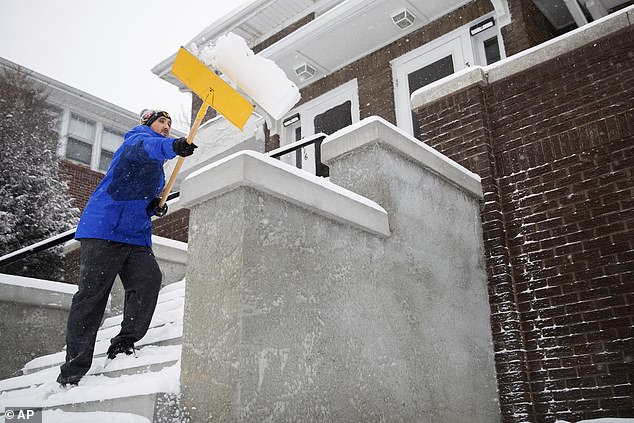 Will Smith, 35, shovels outside his home on Davenport Street in Omaha Wendy Lacina shovels her driveway with a neighbor’s help in Valley Junction, Iowa. Lacina, 53, is scheduled to undergo eye surgery in February. ‘Even in this weather, I would always wear my sunglasses. Today I thought, ‘It’s not sunny out. Let the cold hit the eye, maybe it’ll help it,” Lacina joked. ‘I got nothing to lose.’ The city of Chicago on Monday warned residents that hazardous conditions are likely to impact Tuesday morning commutes and some power outages are possible due to the wet nature of the snow and gusting winds. City officials have dispatched about 280 salt spreaders to clear the city´s main streets and have created warming centers in libraries and park facilities for residents who have no heat because of the loss of power to their homes.

By late Monday, 120 flights had been cancelled at O´Hare and 48 flights at Midway international airports, with 15-minute delays at both facilities.

Gary Mayor Jerome Prince declared a snow emergency late Monday, placing restrictions on where vehicles can park and prohibiting the pushing of snow from private property onto city streets. In addition, Prince closed city-owned buildings and facilities until Wednesday.

Several coronavirus testing sites in Nebraska and Iowa were closing early Monday because of the snow. More than 10 inches of snow had already fallen in parts of eastern Nebraska by Monday evening. Brothers of the Phi Gamma Delta Fraternity pull their friends on mattresses along the street in front of the UNL Union during a winter storm in downtown Lincoln, Nebrasks 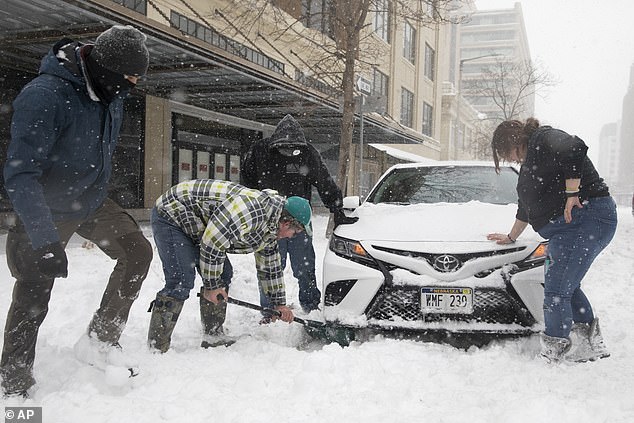 Good samaritans stop to help dig out a stuck car along 13th street during a winter storm in downtown Lincoln, Nebraska 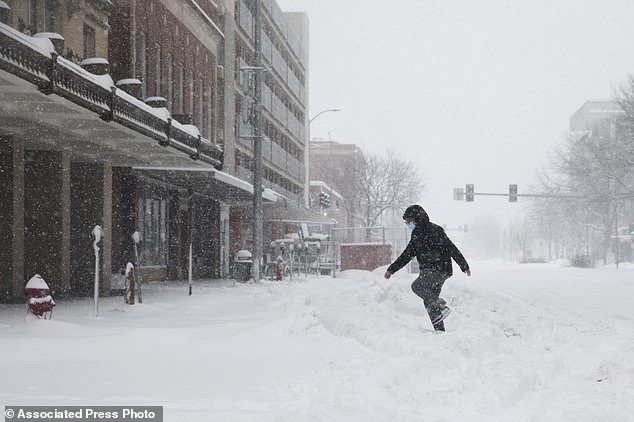 A pedestrian steps in tire tracks while crossing the street during a winter storm in downtown Lincoln, Nebraska

National Weather Service meteorologist Taylor Nicolaisen said 10 to 15 inches (25 to 38 centimeters) of snow was likely between York, Nebraska, and Des Moines, Iowa, and that it has been at least 15 years since that area received more than a foot of snow in a single storm.

‘This is historic snow,’ said Nicolaisen, who is based near Omaha, Nebraska.

Many schools and businesses closed Monday as the storm moved across the region. In western Iowa, Missouri Valley Superintendent Brent Hoesing reworked the lyrics of the 1970s hit ‘I Will Survive’ to tell students in his district to ‘So Stay Inside.’

Officials urged drivers to stay off the roads during the storm, especially during the heaviest snowfall in the afternoon and evening. Nebraska State Patrol troopers responded to more than 200 weather-related incidents Monday.

Roughly 250 semi trucks pulled off the road to wait out the storm at the Petro truck stop alongside Interstate 80 in York, Nebraska. Manager Rachael Adamson said she could see knee-high drifts and that the maintenance man had to go out every 30 minutes to shovel the sidewalks to keep up with the snow.

‘We haven´t had this much snow in quite a few years,’ Adamson said.

‘The big thing that people are seeing is that this snow system is packing a big punch,’ Dinkla said to the Des Moines Register. ‘As we have seen this system move into Iowa, the road conditions go from zero snow on the road to an immediate totally covered roadway in just a matter of minutes.’ A section of eastbound Interstate 80 was closed in central Nebraska Monday afternoon following a crash. And Missouri officials urged drivers not to travel on Interstates 29 and 35 in northwest Missouri into Iowa. The agency said most roads in the area were covered with snow and heavy snow continued falling Monday afternoon.

‘If northern Missouri or Iowa are part of your travel plan, please re-route or find a warm, safe place to wait out the storm,’ the Missouri Transportation Department said.

Elsewhere in the U.S., a storm moving across the Southwest on Monday and Tuesday was forecast to bring gusty winds and snowfall, the weather service said. Over the weekend, more than a foot of snow fell in Southern California´s mountains, making driving conditions hazardous. Interstate 5 was shut down Monday in the Tejon Pass between Los Angeles and the San Joaquin Valley. Wind, snow and ice also forced the closure of State Route 58 through the Tehachapi Pass.

Until recently, California had been experiencing significantly dry weather accompanied by relentless wildfires. A band of clouds suggested more rain could fall Tuesday in areas north and south of San Francisco Bay, bringing the threat of possible flash floods and landslides in areas scarred by the fires. People get out to help push a car stuck at the intersection of 13th and O street during a winter storm in downtown Lincoln, Nebraska 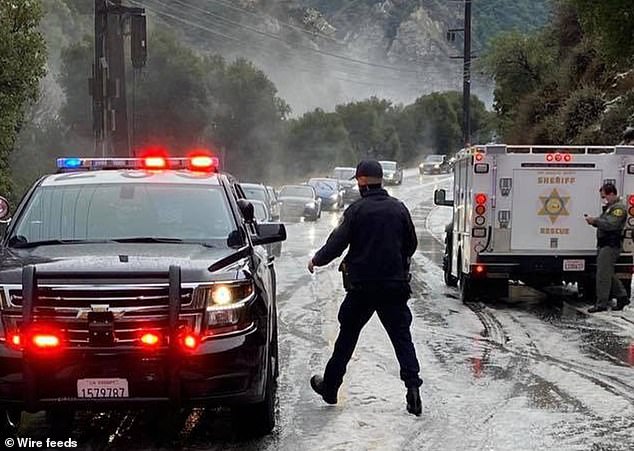 Until recently, California had been experiencing significantly dry weather accompanied by relentless wildfires. Malibu experienced a rare snowfall, and a hail storm caused havoc on the roads People walk through the snow on Capitol Hill in Washington, D.C. on Mnday Snow creates tough driving conditions on Interstate 40 in Bellemont, Arizona. The latest in a series of storms dropped heavy snow in the region

Forecasters at the Sacramento-area National Weather Service office predict an abundance of snow in the Sierra Nevada between late Tuesday and Friday that will make travel through the mountains difficult.

A major winter storm buried northern Arizona in snow on Monday while sending flurries to the outskirts of Las Vegas and Phoenix.

And most of Nevada was bracing for another series of powerful winter storms that could bring rare snowfall to the Las Vegas Strip late Monday or early Tuesday and several feet to the mountains above Lake Tahoe with winds up to 60 mph (96 kph) by Thursday. 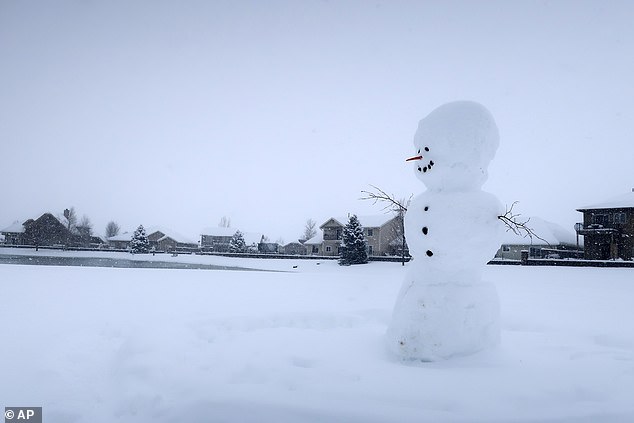 A snowman stands in a field in Bellemont, Arizona. A series of winter storms have dropped more precipitation in Flagstaff than the city had during last summer’s monsoon season Tim Ahlman shovels snow outside his home in Bellemont. The recent snow measured as water topped the amount of rain that fell from mid-June through September, the driest monsoon season on record