Orlando, Florida: Why should we give a hoot what Donald Trump has to say anymore?

That’s what some Americans – let alone people on the other side of the world – were asking as Trump took the stage at the Conservative Political Action Conference (CPAC) for his first speech since leaving the White House. 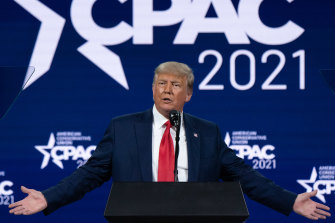 Donald Trump was greeted by a standing ovation at the Conservative Political Action Conference. Credit:Bloomberg

The reticence is understandable. He’s hoovered up media oxygen since he declared his candidacy in June 2015 that could have been devoted to other topics and left many news consumers with a severe case of Trump fatigue.

Of the main three US cable news outlets, only Fox News carried Trump’s CPAC speech live – a sign of his diminishing ratings appeal with independent and Democratic viewers.

But anyone who wants to understand the current Republican Party – indeed the current state of American politics – cannot consign Trump to the history books, no matter how much they want to.

Trump may be a twice impeached ex-president who isn’t allowed on Twitter or Facebook. But, as CPAC vividly showed, he remains easily the brightest star in the solar system of American conservatism. He will continue to define the party in the short-term and is the front runner for the party’s presidential nomination in 2024 – a prospect Trump teased in his speech.

“We will first take back the House and then a Republican president will make a triumphant return to the White House,” Trump told the crowd of conservative activists. “I wonder who that will be?”

Trump’s children Donald jnr and Ivanka have also been mooted as possible future presidential candidates, but if the Republican Party grassroots gets its way, it will be Trump.

As Trump spoke, the crowd erupted into chants of “four more years”. No other speaker at the three-day conference in Orlando, Florida, generated even a scintilla of the excitement Trump did. It was reflected in the queue of people waiting to have their picture taken with a golden Trump statue, as well as a “straw poll” of conference attendees.

Asked whether they would like to see Trump run again, 68 per cent of CPAC-goers answered “yes”. Ninety-five per cent of respondents said they wanted to see the party continue to pursue Trump’s agenda.

It was an entirely different story in the past with one-term presidents such as Gerald Ford and Jimmy Carter, who were regarded by party activists as unviable future candidates. They laid low for years after leaving office.

Trump is insulated from that fate by the fact that most active members of the Republican Party’s base believe his fictitious claims of widespread voter fraud. Buy into that narrative and you don’t need a new candidate or new agenda; you simply need to change the voting rules to stop the other side from “cheating” you again.

Asked to name the most important issue facing the country, a stunning 62 per cent of CPAC attendees said “election integrity”. Less than 25 per cent named abortion or taxes – the kind of issues that used to be top-of-mind for conservatives.

Trump’s CPAC speech heralded the end of his period of relative quiet since leaving Washington.

Describing his endorsement as “the most powerful asset in politics”, Trump said he would actively campaign to elect “America First Republican conservatives” to Congress.

He name-checked the Republicans who had voted to impeach him or convict him of inciting the January 6 attack on the Capitol, essentially announcing a hit-list of enemies he intends to drive out of office in coming years.

Revenge can be a powerful motivator, and campaigning against those who crossed him will keep Trump engaged in politics between now and the 2022 mid-terms.

He also used his speech to begin framing his arguments against a Biden second term, accusing his successor of driving up energy prices and allowing illegal immigrants to flood across the Mexican border.

He also added a new rhetorical ingredient by attacking trans female athletes competing in women’s sports. Trump is aware that transgender rights are a growing concern among conservative activists, filling a space that was previously occupied by opposition to same-sex marriage.

No-one knows what will happen between now and the 2024 election. Trump’s lustre could begin to fade; he could be undone by prosecutors digging into his tax returns.

But he remains a uniquely intoxicating figure for American conservatives. There’s no sign they are going to kick their Trump habit soon.

Oxford University students will have to wear face masks

Farmers could receive help from the government during Covid-19 crisis

Bill Kelly: The Liberals’ gaffe in Burnaby South might be to their benefit