Jakarta: Security forces are trying to recover the bodies of 31 construction workers and a soldier killed by gunmen in the remote Indonesian province of Papua this week. 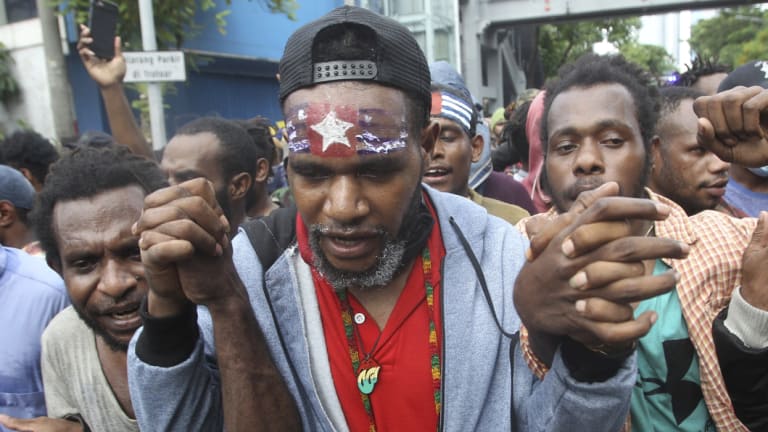 A Papuan activist displays the banned separatist “Morning Star” flag at a rally for the 57th anniversary of the failed efforts by Papuan tribal chiefs to declare independence from Dutch colonial rule, in Surabaya, East Java, on Saturday.Credit:AP

The workers were brought from a distant island to help build a major highway, officials said.

Eight other workers fled to the nearby house of a local Parliament member, but an armed group came a day later and killed seven of them, Diaz said, citing reports from several witnesses. The eighth managed to escape and remains missing.

The police attributed the attacks to separatists who have long pushed for an independent Papua.

"This is the worst attack launched by the armed criminal group recently amid intensified development by the government," Diaz said. 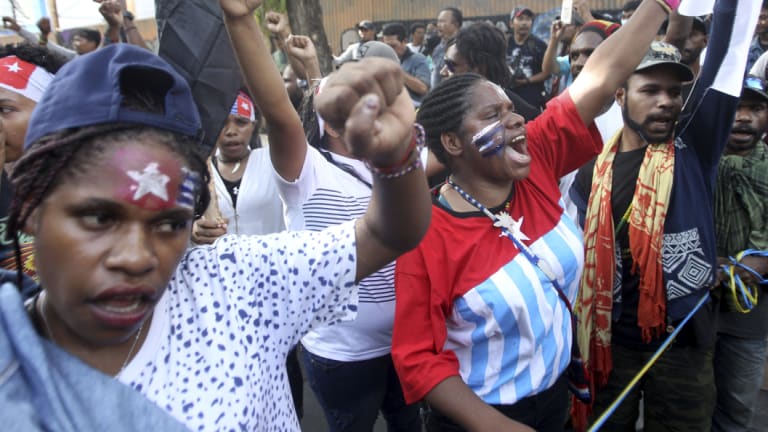 Indonesian Public Works Minister Basuki Hadimuljono told reporters on Tuesday that work on the highway would be halted while authorities investigated the killings.

Police officers and soldiers were attempting to reach the area where the attacks were reported to have occurred.

Papua, which shares the island of New Guinea with the country Papua New Guinea, is a vast, largely inaccessible region with huge oil, mineral and timber resources.

Papua declared independence in 1961 but was annexed by Indonesia in 1969 following a vote of tribal representatives that was widely seen as illegitimate.

For years, the Free Papua Movement, known by its Indonesian acronym OPM, has operated a low-level insurgency in the province.

Bobby Anderson, a research associate at the School of Oriental and African Studies in London with years of experience in Papua, said that the separatists were not particularly active in the Nduga area, where clan violence is common.

He said locals seeking to extort money often target construction workers, who are seen as outsiders.

"Nduga is known for its clan violence, but the OPM factions there are quiet relative to factions in other parts of the highlands," he said. "If these killings were committed by an OPM faction, then it's unprecedented in terms of sheer numbers."

Situated on the eastern edge of Indonesia, Papua is the country's largest province, but it ranks lowest on the Human Development Index, a measure of life expectancy, education and income.

Foreign journalists need special permission to enter the province, and it is rarely granted.

The province is home to the Grasberg mine, the world's largest gold mine, which has long been run by the US company Freeport-McMoRan. After years of pressure from Indonesia, the company is in the process of selling a controlling interest in the mine to a state-run company.

Officials said most of the construction workers were brought from the island of Sulawesi — the recent scene of a deadly earthquake and tsunami — to build bridges that are part of the trans-Papuan highway.

Until 2015, Indonesia had a program of moving settlers from crowded parts of the country to less populated areas, a policy that helped consolidate political control. That led to clashes in some locations, most notably the slaughter of hundreds of Madurese settlers by Dayak headhunters on the island of Borneo in the early 2000s.

Police said a witness had provided information that a worker had photographed a group of people attending a ceremony marking December 1, which many Papuans consider the anniversary of what should have been their independence. A declaration of independence from Dutch rule on December 1, 1961, was rejected by the Dutch and later by Indonesia.

Commemorating the day is prohibited in Indonesia, and the witness said the photography caused anger and could have triggered the attack. However, Diaz said it was unclear whether there was a connection.

Quarantine hotels 'won't be up and running for WEEKS'

Nigella Lawson, 61, called for Covid jab despite being under 65