My first visit to the Oxford Union – the playpen modelled on the UK parliament that serves as a nursery for Britain’s political elite – also turned out to be my last. I cannot recall what motion was being debated that night, but I can still picture the off-putting young fogey who dominated the chamber. Dressed in a tailored waistcoat and jacket, and speaking with plummy ex cathedra certainty, he looked and sounded like a lazy caricature – a Brideshead risibly revisited.

Even in the 1990s, when John Major was touting his classless society, it seemed divinely ordained that this Tory throwback would one day occupy a parliamentary seat and most probably end up in the cabinet. Thirty years on, the right honourable Jacob Rees-Mogg is the member for North East Somerset and the secretary of state for business, energy and industrial strategy. 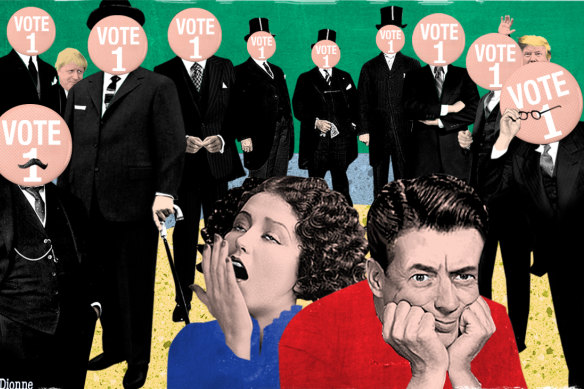 As the Financial Times columnist Simon Kuper writes in his new book – Chums: How a Tiny Caste of Oxford Tories Took Over the UK – Britain is run by an Oxocracy. Five of the last six UK prime ministers studied in the city of dreaming spires. For 34 of the past 43 years, 10 Downing Street has been occupied by an Oxonian. Of late, however, Britain’s prime minister factory has been churning out duds. From David Cameron through to Theresa May, Boris Johnson and now Liz Truss, the quality control has been getting progressively more slapdash.

Britain’s perpetual state of crisis, then, is not just fiscal, monetary or Brexit-induced. Much of it stems from a political personnel problem. The Oxocracy is failing badly. The UK is being run by a self-sustaining cabal of second-rate student politicians.

The talent deficit is by no means confined to Westminster. The far-right leader Giorgia Meloni will become the prime minister of Italy largely because she harvested a protest vote targeted at the mainstream parties in Mario Draghi’s national unity government. In France, the collapse of the two-party system has fuelled the rise of Marine Le Pen. At a time when democracy is in the doldrums, and authoritarianism is on the rise, the free world is suffering from an eclipse of political star power. 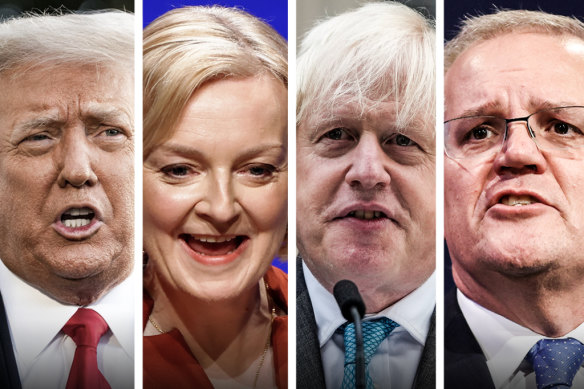 The free world is suffering from an eclipse of political star power: (from left) Donald Trump, Liz Truss, Boris Johnson and Scott Morrison.Credit:

Just look at America. Joe Biden was a lacklustre candidate in 2020, yet nonetheless secured the Democratic presidential nomination because his rivals were so weak. The same is true now. Polls show that Democratic voters would prefer him not to seek re-election, but with no obvious alternative the president, who will be aged 81 on election day, will likely become the default option.

Often it is forgotten that Donald Trump performed so strongly in 2016 because his GOP rivals were so abject. Jeb Bush had to plead with his audience to clap at the end of his lifeless sentences. The Florida senator Marco Rubio was reduced to making dick jokes. Ultimately, “never Trumpers” were forced to unite behind Texan senator Ted Cruz, an Ivy League populist hated by most of his Republican colleagues on Capitol Hill.

The former president remains the beneficiary of an ongoing dearth in conservative talent. Tellingly, his main rival for the 2024 presidential nomination, Florida Governor Ron DeSantis, is a Trump impersonator.

The Australian conservative movement is suffering from a similar drought. In this year’s federal election, Scott Morrison and Barnaby Joyce turned out to the most unpopular party leaders on record, according to the Australian Election Study. Peter Dutton is widely disliked, yet won the Liberal leadership unopposed. 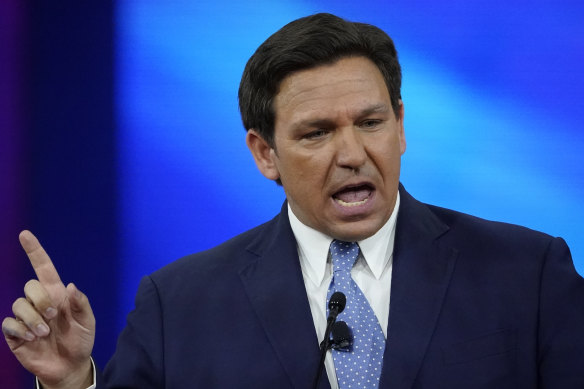 Where, then, should we look for inspiration? The Ukrainian president Volodymyr Zelensky, a former comedian, has emerged as an improbable hero. And surely, it is no coincidence that many of the most impressive politicians are women: the president of the European Commission, Ursula von der Leyen, the Republican congresswoman Liz Cheney, Jacinda Ardern over the ditch, the Finnish Prime Minister, Sanna Marin – who is just 36 years old – and Canberra’s independents.

Broadly speaking, however, politics is struggling to attract the brightest and best. Parliaments have too often become closed shops dominated by careerists: student activists-turned-aides-turned-MPs. Many of those who want to change the world have taken alternative paths, such as working for NGOs, banging the drum for ESG in the corporate sector, or founding clean energy start-ups.

We in the media could play a part by not judging politicians on their journalistic entertainment value, a proclivity that advantaged Johnson and Trump, and weaning ourselves off the dopamine hit of leadership spills. In its coup-capital phase, which was aided and abetted by a poll-fixated press gallery, Canberra burnt through some of its finest talent. In a less fevered time, Kevin Rudd, Julia Gillard and Malcolm Turnbull would have been expected to serve longer terms in The Lodge.

As for Anthony Albanese, it is hard to imagine him becoming a genuine global head-turner, even though he has made a sure-footed debut on the international stage. Still, when so much of the democratic world is in turmoil, there is much to be said for a solid, quiet achiever – a prime minister you can have on in the background.

NHS will need to jab a record 1.1 MILLION people EVERY day