New York: If it were written now as a series of tweets, they would surely go viral.

Think of it: one of the most famous people in the world is panning religion.

"The word God is for me nothing but the expression of and product of human weaknesses, the Bible a collection of venerable but still rather primitive legends," the message reads. "No interpretation, no matter how subtle, can (for me) change anything about this." 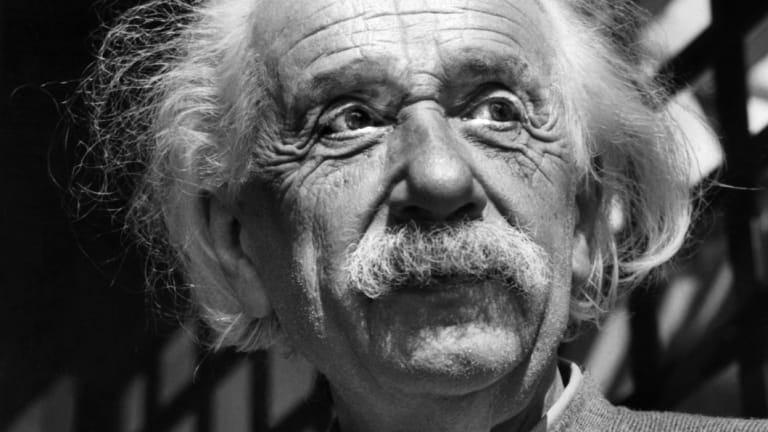 That is only 239 characters, including the spaces, periods and commas, well short of the 280-character limit for a tweet. And there is more where those words came from — a letter written in 1954 by Albert Einstein that is being auctioned this week. It provides a glimpse of Einstein's private thoughts and would probably be inflammatory in today's polarised social media world.

The 1½-page document, in German, became known a decade ago as the "God letter", a nickname that makes some Einstein experts wince. But while the letter has to do with his Jewish identity and mankind's search for meaning, Einstein used the word "God" only once in the letter, in the passage quoted above. 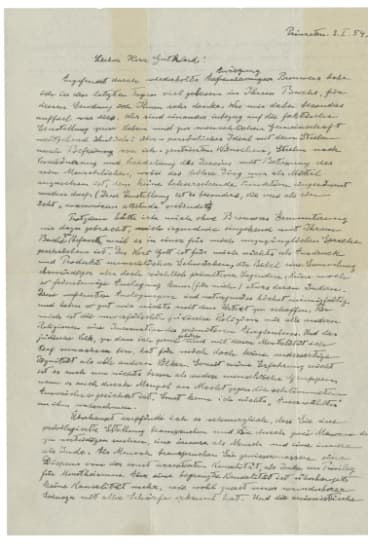 He sent the handwritten letter to Eric Gutkind, a German philosopher who had written a book called Choose Life: The biblical call to revolt that, apparently, Einstein did not much like. By one account, the book "presented the Bible as a call to arms, and Judaism and Israel as incorruptible." A review in Commentary magazine said Choose Life was "genuinely inspired by Jewish tradition" and "challenges a disillusioned generation to 'prepare the world for the Kingdom of God.'"

Einstein wrote in the letter that he was disenchanted with Judaism, even as he said he was proud to be a Jew. In the letter, Einstein declared:

"For me the unadulterated Jewish religion is, like all other religions, an incarnation of primitive superstition. And the Jewish people to whom I gladly belong, and in whose mentality I feel profoundly anchored, still for me does not have any different kind of dignity from all other peoples. As far as my experience goes, they are in fact no better than other human groups, even if they are protected from the worst excesses by a lack of power. Otherwise I cannot perceive anything 'chosen' about them."

Einstein wrote dozens of letters in which he mentioned God or Judaism. "Nobody should read one Einstein letter and think that solves what he thinks about God," Walter Isaacson, author of the 2007 biography Einstein, said in an interview. In different decades "or even on different days," Isaacson said, Einstein's views "were not totally unchanging." 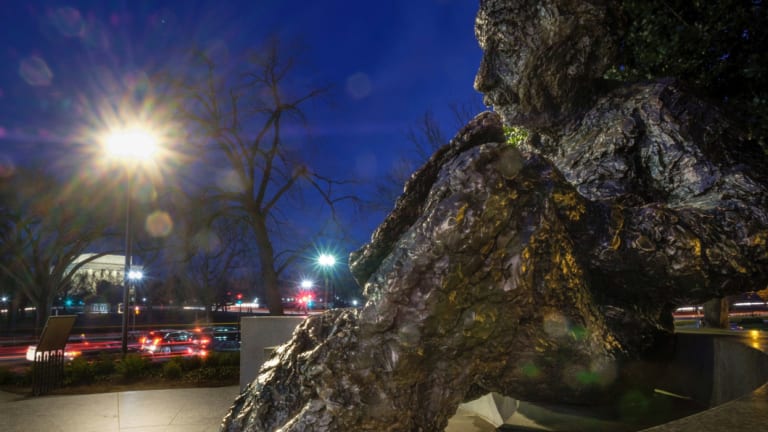 A statue of Albert Einstein sits in the shadow of the early morning commuter traffic in Washington.Credit:AP

The buyer was not identified. The Guardian said that evolutionary biologist Richard Dawkins, an outspoken atheist, was one of the bidders who lost out.

Now the letter is on the market again. It will go on the block at Christie's on Tuesday, New York time. Christie's set a pre sale estimate of $US1 million to $US1.5 million. (The God letter was offered for sale on eBay for $US3 million in 2012. The auctioneer who handled the eBay listing said he could not discuss the outcome. A Christie's spokeswoman said that it did not sell then and that the person who bought it in 2008 is the seller now.)

Peter Klarnet, a senior specialist in US manuscripts at Christie's, said one of the great growth areas in book and manuscript collecting has been science. He said the most valuable Einstein letter was a typed copy of his 1939 note to US president Franklin Roosevelt, sold at Christie's for $US2.1 million in 2002, that warned of the possibility "of the construction of extremely powerful bombs." That letter served as a catalyst for research that led to the Manhattan Project.

The God letter, written the year before Einstein's death, seems to outline Einstein's view of formal religion and the idea of a God who plays an active part in everyday life, answering individual prayers. "He did not believe in a God who went around choosing favourite sports teams or people," Isaacson said.

But at other times Einstein described himself as "not an atheist" and the letter does not annul the seemingly spiritual characteristics of his thinking.

"Einstein often uses the word God —'God does not play dice with the universe,'" Rebecca Newberger Goldstein, who teaches philosophy and wrote Plato at the Googleplex: Why Philosophy Won't Go Away, said in an interview. "A lot of physicists do this. It misleads people into thinking they're theists, they believe in God. It's a metaphorical way of talking about absolute truth. Einstein used it metaphorically and playfully."

She said he had been religious when he was a child but "lost his religion and science took over."

Gutkind had made the case in his book that "the Jewish soul is perfect intellectually as well as spiritually," according to the review in Commentary magazine. "The mathematicised Einsteinian universe is Jewish as well as progressive, because it is anti-mythological." Commentary also noted Gutkind's "eagerness to find salvation for modern man in the Jewish spirit" (although the reviewer added that doing so induced Gutkind "to make the most extravagant claims in its behalf").

Diana Kormos-Buchwald, a history professor at the California Institute of Technology and director of the Einstein Papers Project, said Einstein was "not particularly thrilled at the special place that Gutkind devotes to Einstein's science as the — how shall we put it — the best example of Jewish deterministic thought."

"The Jews are the only group to which he feels he could belong," she said. "But he identifies with them because that is what he was born into, not because they are the chosen people."

She summarised the letter as "a nice way" to tell Gutkind, "I don't think like you, and I don't like what you're saying." She said Gutkind's book had mentioned Einstein 11 times "and holds up Einsteinian physics as the new overarching philosophy of the universe, of space and time."

But now it is more than 60 years later. What would Einstein say if he knew that the letter was being sold and that the auction house was hoping it would go for a seven-figure price?

"I have no idea what Einstein would think," Isaacson said. "It's like what Steve Jobs would think of the watch, or something."

Portland cop punched and knocked to ground during night of destruction

In wake of COVID, Halloween teaches kids ‘not to be afraid of the dark’