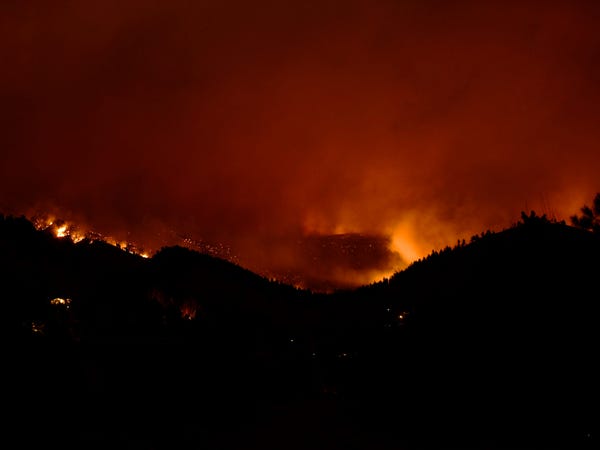 An elderly couple in their 80s died in their home which they did not want to evacuate when the massive wildfire swept their community near Rocky Mountian National Park in Colorado.

The Colorado Grand County Sherrif's Office said Friday evening that Lyle and Marilyn Hileman, 86 and 84, had been contacted for evacuation from the wildfire but refused to evacuate because they wished to stay in their house they've had for many years. The investigators of the sheriff's office and partner agencies found the two burned in their residence on Friday afternoon, the sheriff said.

The East Troublesome Fire started last week and spread into Rocky Mountain National Park, which was closed in entirety by the National Park Service on Thursday. It has scorched around 188,000 acres so far and the cause is under investigation, according to the Incident Information System.

The sheriff also read a statement from the family of the couple. The statement said several friends had contacted the couple on Wednesday evening to offer support and help for evacuation. However, the couple refused all hands of help, according to the statement.

"At 86 and 84 years of age, [their] only desire was to be together in the home they loved," the statement said.

The couple was "adamant" they would not leave even as the wildfire spread in the area, according to the statement. They asked their son to call his siblings that they were in the basement, and told their son they could smell smoke shortly before hanging up, the statement said.

"But our family feels comfort in the knowledge our parents left this world together and on their own terms," the statement said.

Colorado man gets lifetime hunting ban for poaching in multiple counties: 'His violations are among the worst'