European travel chiefs are calling for the creation of ‘tourism corridors’ so holiday resorts can re-open in time for summer.

Ministers from nine countries, including France, Italy, Greece and Spain, wrote to European Union chiefs on Tuesday warning the industry faces collapse if special measures are not rolled out soon.

Ideas under discussion include an EU-wide set of rules and protocols for tourist arrivals and departures which one minister described as a ‘Covid-19 passport.’ 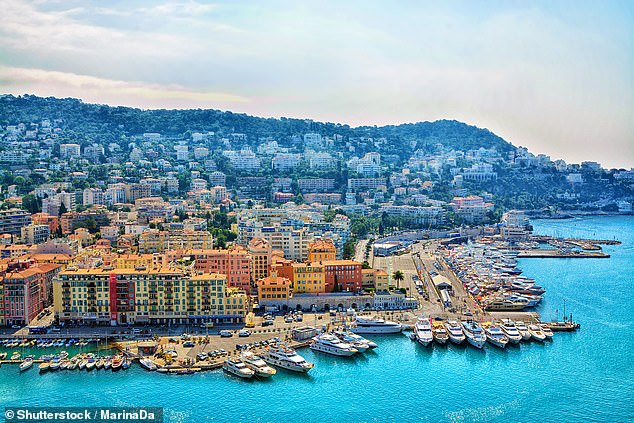 European travel chiefs are calling for the creation of ‘tourism corridors’ so holiday resorts can re-open in time for summer. Pictured: The Cote d’Azur in France

Several EU countries are mulling how to allow holiday resorts to reopen, but want Brussels to draw up a bloc-wide blueprint in a bid to avoid a chaotic patchwork of bi-lateral agreements creating confusion for travellers.

The call last night boosted hopes that Britons may still be able to book breaks to popular destinations on the continent this summer.

She added: ‘We need to commit ourselves to reopening as soon as possible. There are risks, but we need to manage risks.

‘Too much is at stake to simply lie inactive, until relief arrives, in the form of a [coronavirus] vaccine. We cannot go down that road.’

It is understood the measures could include passengers being subject to temperature checks and pre-flight blood tests.

But Brussels is unlikely to unveil any concrete plans before next week. It is unclear whether some countries could be exlcuded if it is felt their coronavirus situation is not under control.

In their joint letter, EU ministers called for the bloc to ensure credit lines are available to airlines to keep flights airborne as restrictions ease.

‘We must facilitate access to liquidity to airlines,’ they wrote.

During a videoconference of EU tourism ministers on Monday, Croatia’s minister, Gari Cappelli, said ‘something in the form of a COVID-19 passport’ valid in all member states could be created. 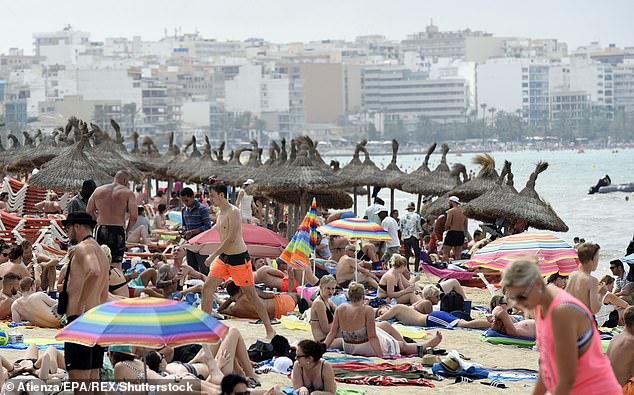 Ministers from nine countries, including France, Italy, Greece and Spain, wrote to European Union chiefs yesterday warning the industry faces collapse if special measures are not rolled out soon. Pictured: A beach in Palma, Majorca

Yesterday Austria’s tourism minister announced hotels will be allowed to re-open from May 29, along with swimming pools.

Although Britain left the EU on January 31, any new travel rules could include the UK because it remains in the single market until the Brexit transition period expires at the end of this year.

European Commission chief Ursula von der Leyen raised hopes for the industry earlier this month by saying that ‘smart solutions to have a summer vacation’ may yet be found.

This could include sunbathing in big plexiglass boxes set up on beaches to ensure sun-seekers are isolated from each other.

Tourism accounts for around 10 per cent of the bloc’s GDP and employs around 22.6 million people – more than 11 per cent of total employment.

However, the OECD estimates the sector could see a 70 per cent decline this year.

A European Commission spokesman yesterday said: ‘We will be coming forward with guidelines on how to increase connectivity in the European Union, lift border control measures and ensure freedom of movement.’

When asked if this was intended for this summer, the spokesman quipped: ‘Well I very well hope so because I have the firm intention of going on holiday at some stage as I’m sure you have, so yes we’re working towards this year, not next year.’

Intensive care nurse, 28, on coronavirus front line reveals she was told to prepare her will before first shift – The Sun