EXCLUSIVE: Former British fitness teacher is accused of scamming dozens of people including UK airline workers out of £300,000 in currency exchange fraud in Dubai 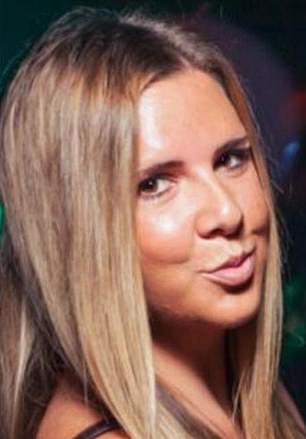 A former British fitness teacher is at the centre of a suspected fraud in Dubai after dozens of people claim they have been conned out of hundreds of thousands of pounds.

Over the last two months the 34-year-old has allegedly taken money to exchange from UAE based airline workers, many of them British, faced with losing their jobs due to the coronavirus crisis.

Some say they have lost their life savings by taking up Blaymire’s offer to exchange their local money into other currency and send it to their overseas bank accounts.

Blaymire, a regular on the Dubai social scene, admitted to MailOnline that ‘people are owed a lot of money’ but claimed she was working for other people.

She said: ‘Someone approached me to work for them. I did take money and I have tried my best and have tried to sort it out. I know people are owed a lot of money.’

Blaymire also admitted she was jailed last year over a bounced cheque – but claimed it was a mix up by the bank that led to 15 days in a police cell.

The alleged money exchange victims include a pilot who wanted to send money to his family to pay for a funeral and another who had planned to use money for a deposit on a house.

Blaymire is believed to have been handed more than £300,000 to exchange over the past months.

One alleged victim told MailOnline: ‘I gave her money with the promise that it would be transferred to my family overseas, but it looks like she has kept it.

‘When I confronted her she just comes up with a litany of excuses and says the money will be paid. That was months ago. I know I will never see the money again.’

Over the last two months the 34-year-old has allegedly taken money to exchange from UAE based airline workers, many of them British, faced with losing their jobs due to coronavirus 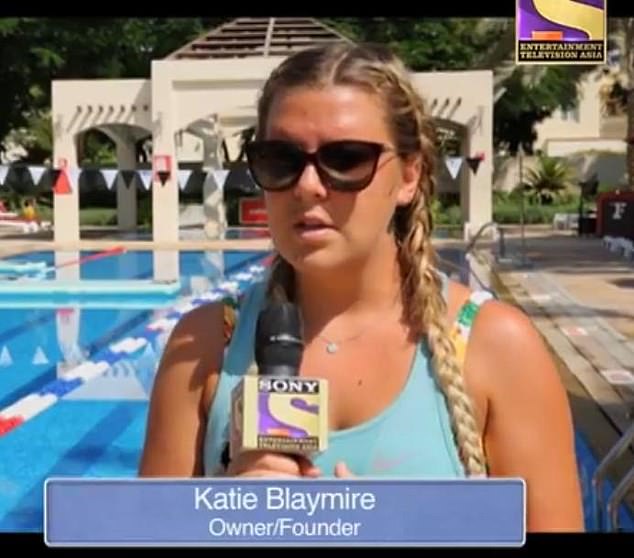 Blaymire, a regular on the Dubai social scene, admitted to MailOnline that ‘people are owed a lot of money’ but claimed she was working for other people

At least 20 people so far are believed to have filed complaints with police and the Serious Fraud Office in London is understood to have been alerted.

It is understood that Blaymire is currently banned from leaving Dubai after being jailed last December over a ‘bounced’ cheque.

Her former business partner says she was arrested at the airport when she tried to leave on Christmas Eve for a holiday in France.

Alleged victims told MailOnline she joined a Facebook page for out of work cabin crew based in Dubai.

Many had posted messages looking to exchange local UAE currency for Euros or dollars in the hope of avoiding charges made by banks and currency exchange dealers.

Blaymire met several in person and offered to ‘swap’ their local currency for money held in her overseas accounts, including one in Benfleet, Essex, by using established electronic transfer sites in the UK.

Blaymire is alleged to have used the fake names of Imogen Smith and Dawn Smith.

One victim, a 36-year-old Australian cabin crew member, wanted to send money home to her parents.

She met Blaymire outside at her apartment in Dubai marina and says she handed over £6,000.

Sally (name changed) said she later received copies of the transfer that she suspects to be fake.

She says demands for her money were met with repeated excuses and over three months after giving Blaymire the cash she has not had anything back.

MailOnline has seen dozens of text and WhatsApp messages where Blaymire provides explanations for not transferring the money.

Many of the emails sent to the alleged victims showing money transfers are undated.

Sally said: ‘There is much uncertainty in the airline industry and lots of cabin crew have been wanting to change local currency into the currency of their home country.

‘She offered a quick and cheaper way to do this, but it seems to be all a scam.

‘She met me person to person which gave the air of respectability. She was very convincing and I believed her that the money would be sent to Australia. She told me she had an Australian account and the money would come out of that.

‘She even told me her boyfriend worked in the finance which all gave it an air of being respectable.’

It is understood that police in Dubai have initially told the victims they cannot take any criminal action as the transactions were from one person to another and there was no legal contract.

They have been advised to sue Blaymire in the civil courts but for many the cost of lawyers and translators far outweighs how much they have lost.

It is understood that police in Dubai have received dozens of complaints about her.

Another alleged victim was a Belgian cabin crew member who wanted to send 25,000 Euros to his overseas account.

He said: ‘She came to my apartment; she was very convincing and charming. A few days after giving her the money she sent a copy of the transaction. 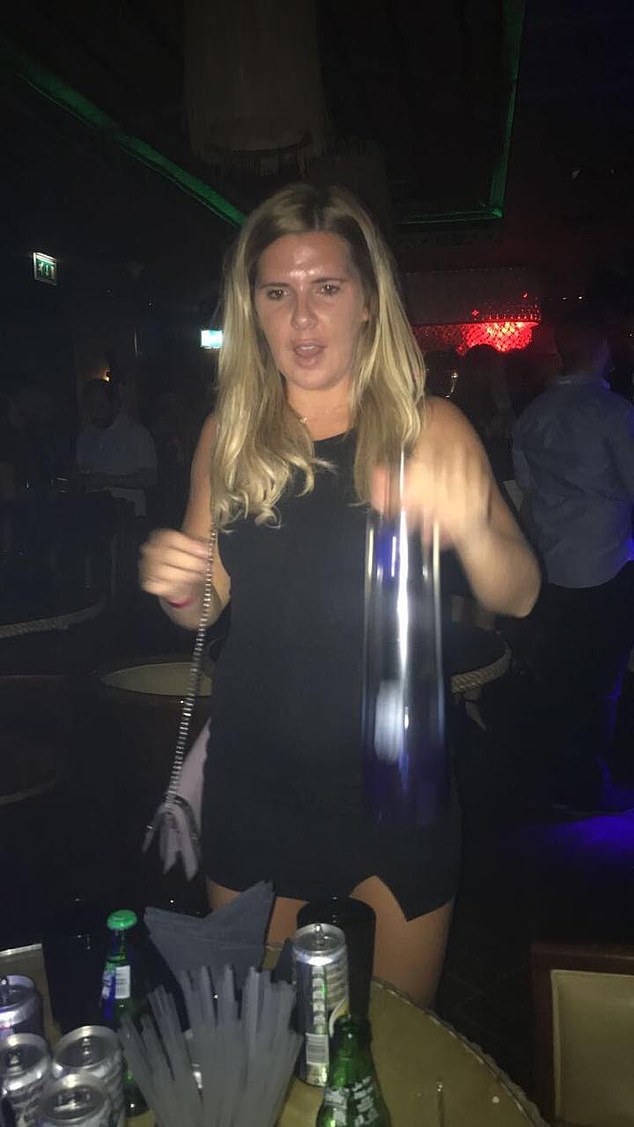 Blaymire denied to MailOnline that she was operating a scam. She said she had carried out many currency exchanges and had repaid all money that was owed

‘She told me that she had Euros sitting in an account from a property deal but I doubt that it even exists. She seemed so nice. Lots of people were swapping currency after making contact on a Facebook page.’

Alleged victims, who set up a support group to compile Blaymire’s activities, say they have been contacted by more than 100 people.

Among them is British restaurant owner Valy Ossman who says he is owed £36,000 by Blaymire.

He wanted money transferred from the UK to his account in Dubai as he planned to open a second restaurant in the tourist hot spot.

He said: ‘I needed to convert about £42,000 into dirhams in a cost-effective way to open the restaurant.

‘Even a small fluctuation in rates and fees on this amount could mean a difference of several thousand dirhams.

I was looking to get the best deal from exchange houses when ‘Imogen’ messaged me and offered to do a swap at market spot rate.

She explained that she was looking to raise funds to be able to return to her husband in the United Kingdom. It seemed like a plausible reason.’

When Ossman’s money failed to arrive he suspected he had been scammed and went to the police to file a complaint.

His wife found a notebook left behind by Blaymire where she had written down the names of people she had spoken to.

Few of the alleged victims expect to get their money back but hold out hope the authorities will take action.

It is understood that Blaymire, who is originally from Burnley, Lancashire, is not allowed to leave the UAE as she has outstanding debts owed to swimming instructor Alex Campbell.

It is understood that Blaymire, who is originally from Burnley, Lancashire, is not allowed to leave the UAE as she has outstanding debts owed to swimming instructor Alex Campbell

He says he took her to court after he invested about £15,000 in her fitness company called FloatUAE in return for a job.

In 2016 Blaymire had started the company offering fitness workouts at five star hotels using floating mats on pools and appeared in a promotional video publicising the new fitness trend.

When 51-year-old Campbell tried to cash a security cheque for his investment he says it bounced. He filed a complaint with police which meant her name was flagged up with immigration control when she tried to leave Dubai.

It is understood Blaymire was arrested and jailed on Christmas Eve 2019.

Alex told MailOnline: ‘She called me on Christmas Day pleading with me to help her get out by dropping the case. She was being held in a police jail and did not want to get transferred to a main prison.

‘She agreed to a payment plan in front of a judge and was released on January 8th.

‘Despite telling the judge she would agree to a payment plan I have not received anything.’

‘I spoke to her in March and she said she can’t pay the money due to the Covid-19. She has never apologised but just says she wants to put this behind her.

‘I don’t have any sympathy for her. She will not be able to leave until the money has been paid as there will still be an arrest warrant out for her.’

A businessman claimed he is owed thousands after he invested in Blaymire’s scheme to develop an app for people to order take away food.

The Dubai resident, who asked not to be named, said gave Blaymire £28,000 as an investor.

‘She spent about £2,000 on the software developers and that was it. The app was never developed and I’ve never seen my money.’

Several alleged victims who have tried to get their money back say they have been threatened by friends of Blaymire.

In the six years she has lived in Dubai she was a fixture on the nightclub scene with her photo often appearing in magazines while photos posted on social media show the blonde enjoying life in the sun and at parties.

Blaymire denied to MailOnline that she was operating a scam.

She said she had carried out many currency exchanges and had repaid all money that was owed.

She said: ‘Many people happily used this service with no complaints, many have used more than once and been satisfied. People received their money on time with no issues.’

She claimed Mr Campbell had been paid money that he is owed. Mr Campbell supplied court documents to MailOnline which he said prove the debt owed.

Blaymire said she was not responsible for the receipts of money transfers sent to her alleged victims but would not explain where they came from.

She also denied being banned from leaving Dubai but confirmed she was aware police in Dubai were investigating her.

How the MAFIA will cash in on Italy's coronavirus collapse