Home » World News » Face-sized chunks of ash fell from the sky in California wine country, where the Glass Complex Fire has forced 70,000 to evacuate 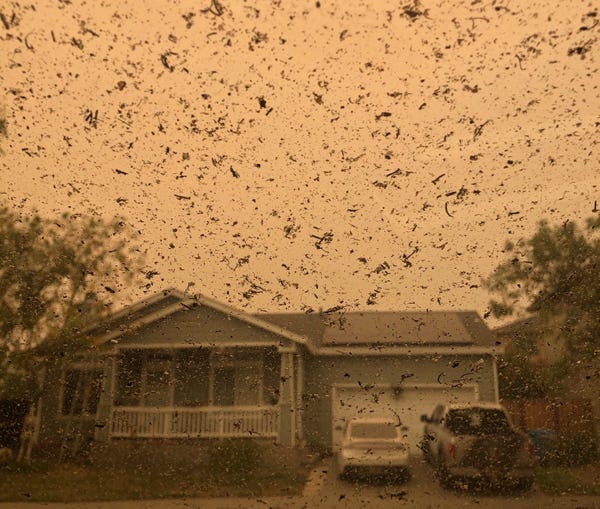 Morgan Balaei stores her family's most precious photos in a box by the front door of her home in Santa Rosa, California – pictures from her childhood and her parents' wedding.

"We just keep it near the door, ready to go," Balaei, who's now 40 years old, told Insider. The box has been there since 2017, when the Tubbs fire tore through her community in Sonoma County, destroying thousands of homes and killing 22 people.

The Tubbs Fire was the most destructive in California history at the time, though it was eclipsed a year later by the Camp Fire. Then this year, Santa Rosans lived through a blaze that burned a far bigger area than either of those: the 363,000-acre LNU Lightning Complex Fire, which killed five people in late August.

Fire season isn't over, though, and now they're dealing with the Glass Complex Fire, which ignited on Sunday. It has spread over 56,000 acres and is lapping at the eastern edges of Santa Rosa.

While driving, she added, "I could actually hear it landing on my car."

When she surveyed the area the following morning, huge pieces of ash, black and stringy, covered her backyard. One of the chunks was "probably the size of my face," she told the San Francisco Chronicle.

Balaei estimated it took her and her family more than two hours to clean up.

"Fire's always scary, but to me, the ash and the amount of it just around the neighborhood, burnt leaves, was just as terrifying," she said. "Any of those things could have sparked a fire in the middle of my neighborhood."

Other residents also found unusually large pieces of ash on their homes, cars, and neighborhoods. R. Tyler Croy, another Santa Rosan, posted a photo of his ash-covered car to Twitter.

"We did not see this kind of ash fall during the Tubbs or Kincade fires," he told Insider. "Seeing entire leaves land on the sidewalk is quite bizarre."

A record-breaking year of fires

The Glass Complex Fire's proximity to populated regions has forced some 70,000 residents to flee their homes. It has already destroyed around 250 structures.

Winds in the area died down earlier this week, but they're expected to pick up again on Thursday, according to Santa Rosa Fire Chief Tony Gossner.

"For the city of Santa Rosa residents, this wind event is going to be serious enough for everyone to pay attention," he said, according to KQED. "So whether you live in a warning zone or an evacuation zone, you need to pay attention to the weather and everything around you. It's vital."

Climate change has increased the number and severity of fires in California. The state's 10 largest wildfires ever have all occurred since 2000; five of those happened this year.

Bigger and more frequent seasonal blazes are expected to erupt even more often as land gets hotter and drier. A recent analysis from Stanford University found that since the 1980s, the average temperature during California's wildfire season has risen by more than 2 degrees Fahrenheit. Overall precipitation in the season, meanwhile, has dropped by 30%. Those conditions have more than doubled the state's number of extreme wildfire risk days in autumn.

October is historically the worst month for wildfires in California.

But despite the danger, Balaei doesn't have plans to leave her community in Santa Rosa.

"This is my little slice of heaven," she said. "So i'm gonna stick it out."

Large chunks of ash are no longer falling, she added – now it's "more of those small little flakes you see out of the corner of your eye."

But as of Thursday morning, the Glass Complex Fire was only 5% contained.