Mark Zuckerberg’s former mentor who was an early Facebook investor hailed its whistleblower and slated the social media giant as he called for it to be regulated.

In an interview with CNN Tuesday morning, Roger McNamee called Frances Haugen, a former product manager for the company who has come forward to detail what she claims is the firm’s malevolent behavior, ‘so courageous, so authoritative and so utterly convincing that I think Facebook no longer has any excuses for inaction.’

‘I think the time has come for them to look at safety and to look at privacy,’ he told New Day host Brianna Keilar, ‘because this is not just about Facebook this is about that business model, which is something that’s been used not just by Facebook, but by Google, portions of it by Amazon and Microsoft and now it’s being used throughout the economy.

‘You see it in the automotive sector, in the healthcare sector and beyond, and it’s all based on surveillance, it’s all based on manipulating people’s choices so that effectively it takes away from us our rights to determine our decisions in our own lives, and it’s so pervasive right now.’ 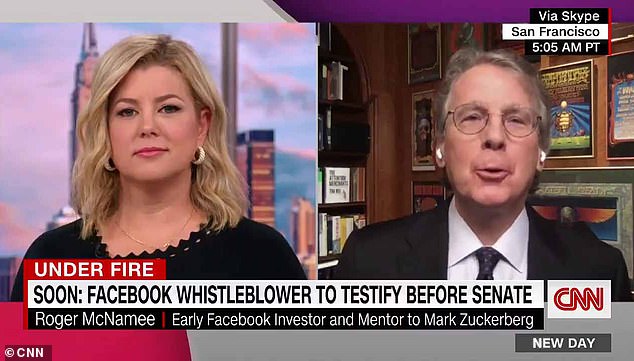 McNamee, whose net worth is estimated at $1billion, set up a venture capital firm which invested $210 million in Facebook shares in 2009 and 2010.

He began offloading his stock in the company in late 2019, months after he began speaking out against it, saying that to do so earlier would have looked like he was plotting against the company.

He is a member of the Real Facebook Oversight Board, set up in response to Facebook’s own oversight board, which members of the ‘real’ group claim does not have enough teeth to challenge Zuckerberg and other executives.

Calling for regulation as Haugen appeared before Congress to testify against her former employer, McNamee added: ‘And Congress just needs to say “Hey wait a minute, this is like child labor,” this is unethical, it’s un-American and we just need to go back to doing things in a way where people get to be themselves.’ 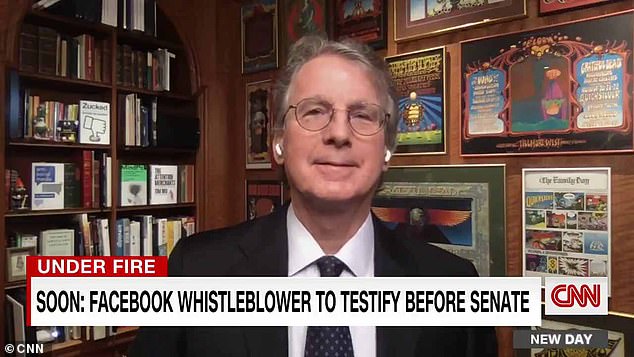 McNamee said that the six-hour long outage of Facebook, Instagram and WhatsApp on Monday ‘serves as a minder that Facebook is a monopoly and when its utilities’ go out ‘that affects hundreds of millions or people every minute and billions of people every day.

‘To me the key message is this is a monopoly,’ he told Keilar, when she asked about his thoughts on the outage, ‘and it needs to be regulated as such.

‘And everything that Facebook does is a  reminder that we’ve allowed our economy to go from a world that takes the needs of consumers first to one that basically uses consumers as marks in some kind of scam,’ he said.

‘We’ve seen this problem before, we can handle it,’ McNamee noted. ‘This is Congress’ job and they need to start today.’

McNamee, 65, founded the venture capital firm Elevation Partners with Sheryl Sandberg, now the chief operating officer at Facebook, in 2004. It would go on to invest in Facebook in 2007.

But the company initially failed to turn a profit, Business Insider reports, and McNamee recruited Sandberg to the company in 2008. One year later, the site amassed more than 300 million users and turned its first profit. It is now valued at $1 trillion dollars, with advertisers pouring billions into the firm’s coffers to target 2.89 billion users.

The company went public in 2012 and began to grow, but McNamee said he started having concerns about its ‘surveillance capitalism’ model –  collecting and aggregating user data to micro-target people to predict and manipulate their behavior.

In 2016, he said he suspected the company’s advertising tools were being used by political operatives to sway outcomes, and after Brexit passed in June 2016, he said he went to founder Mark Zuckerberg and Sheryl Sandberg to demand they take action.

When they didn’t, he broke off his contract, and began lobbying public officials to regulate social media sites, according to McNamee, who also accused Facebook of allowing Russian meddling to influence the 2016 presidential election result.

Brexit saw the United Kingdom leave the European Union, with 52 per cent of those who voted opting to do so. People who wished to remain claim many voters were manipulated into voting leave by social media ads, although many leavers have refuted that claim, and branded it patronizing.

Similar allegations – and refutations – were made in the wake of Donald Trump’s surprise 2016 presidential election win, which came five months after the Brexit vote. 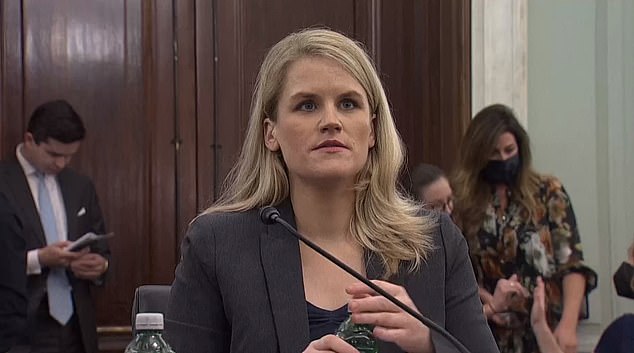 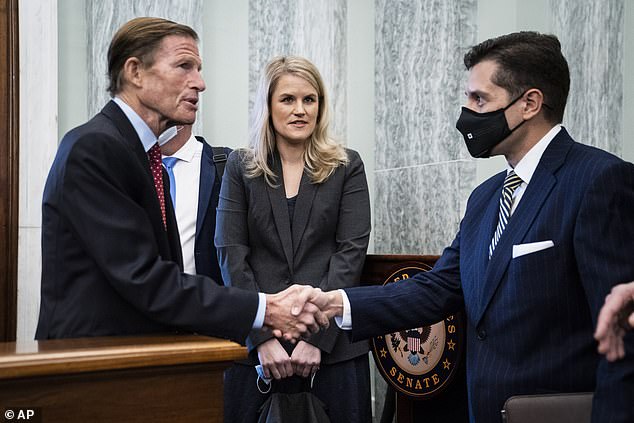 She claimed the company will not change without Congressional intervention

McNamee latest comments come as Frances Haugen testifies before Congress about the need to regulate the social media site.

She said in her opening statement on Tuesday that she decided to speak out because she believes that Facebook’s products ‘harm children, stoke division and weaken our democracy.

‘I joined Facebook because I think Facebook has the potential to bring out the best in us, but I’m here today because I believe Facebook’s products harm children, stoke division and weaken our democracy.’

She claimed the company knows about the negative effects it has on children and executives know how to make Facebook and Instagram safer, but won’t do so ‘because they have put their astronomical profits before people.’

‘The documents I have provided to Congress prove that Facebook has repeatedly misled the public about what it’s own research reveals about the safety of children, the efficacy of artificial intelligence systems and its role in spreading divisive and extreme messages.

‘I came forward because I believe that every human being deserves the dignity of truth,’ she continued, noting: ‘These problems are solvable.

‘Facebook can change, but is clearly not going to do so on its own.

‘My fear is that without action, [the] divisive and extremist behaviors we are  seeing now are just the beginning.

‘Congress can change the rules that Facebook plays by and stop the many harms it is causing,’ she said, telling lawmakers: ‘They won’t solve this crisis without your help.’

Statue of Abraham Lincoln with kneeling slave removed in Boston