Facebook shuts down RT in Russian page – the largest Russian-language media page on the platform, with 2 million followers – ‘without any explanation’

RT tweeted on Monday that Facebook shut down the RT page in Russian ‘without any explanation.

‘The page has more than 2 million followers, making it one of the largest Russian-language media pages on Facebook.

‘We expect a response from the customer service team,’ the outlet said.

The RT page in English, however, still seems to be working.

Some on the RT page are now accusing Facebook of playing politics. DailyMail.com has reached out to Meta for comment. 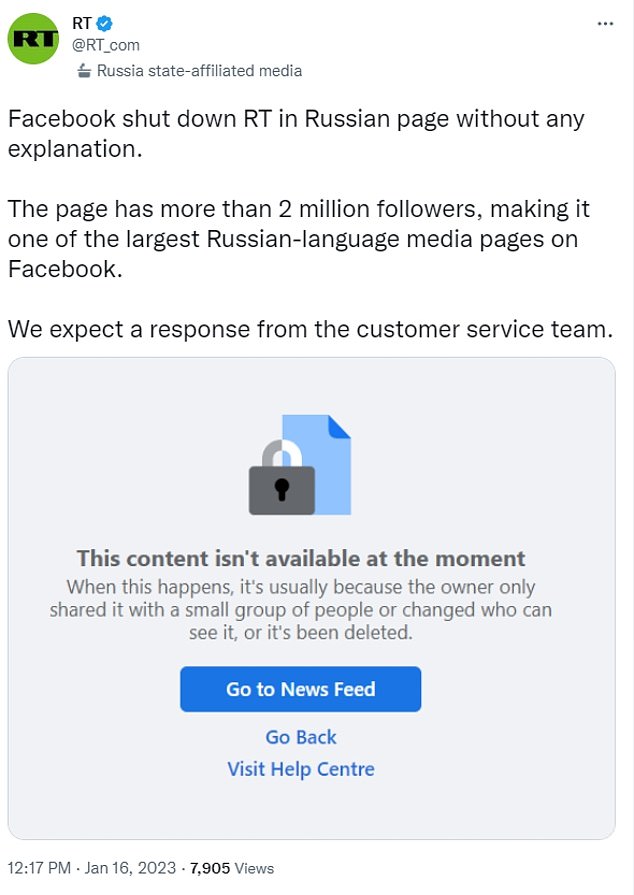 The move comes nearly one year after Meta Platforms — the parent company of Facebook — announced that it would restrict access to RT on all of its platforms across the European Union.

Nick Clegg, Meta’s vice president of global affairs, said in a Twitter post at the time that the social media company received requests from a number of governments and the European Union to take steps to limit Russian-state media on its outlets following its invasion of Ukraine.

‘Given the exceptional nature of the current situation, we will be restricting access to RT and Sputnik across the EU at this time,’ Clegg tweeted, adding that the site would continue working closely with governments on the issue.

European Commission chief Ursula von der Leyen had earlier announced the Russian-state media and its subsidiaries would be banned from broadcasting in the bloc for spreading ‘lies to justify Putin’s war’.