Families queue along the street outside Italian pawn shops, which have seen a 30% surge in customers since lockdown brought economic misery

Italian pawn shops have seen a 30 per cent increase in customers since lockdown in the coronavirus-ravaged country was eased earlier this week.

Affide pawn shop, one of the largest pledge lenders in the country, said it has had to extend its opening hours after seeing a 30 per cent increase in customers since Italy lifted some of its lockdown measures on Monday.

People from all walks of life were queuing outside the company’s flagship store in Rome, looking to swap their prized family jewellery for some much needed cash, Il Piccolo reported.

Luciana, 73, a retired grandmother, said she had come to the store with the family gold to help her son, offering two necklaces and a pair of pearl earrings, with the hopes she could drum up enough money so he could pay maintenance costs for his daughter. 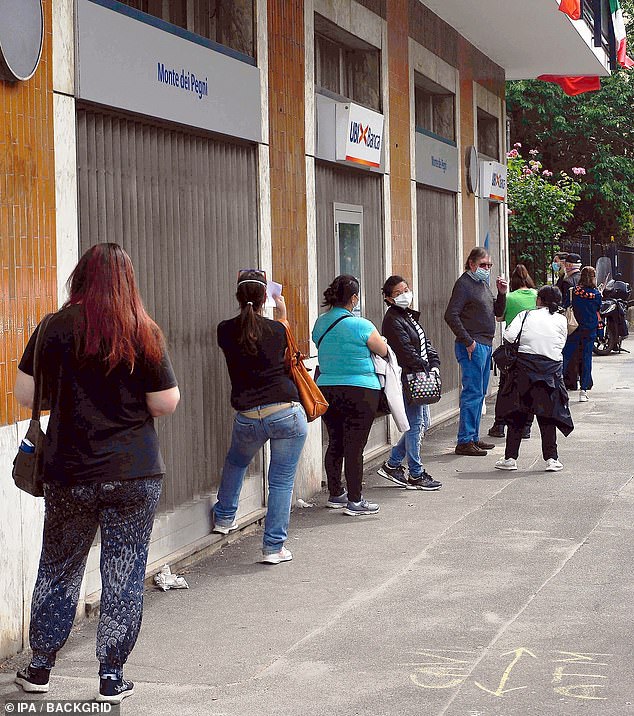 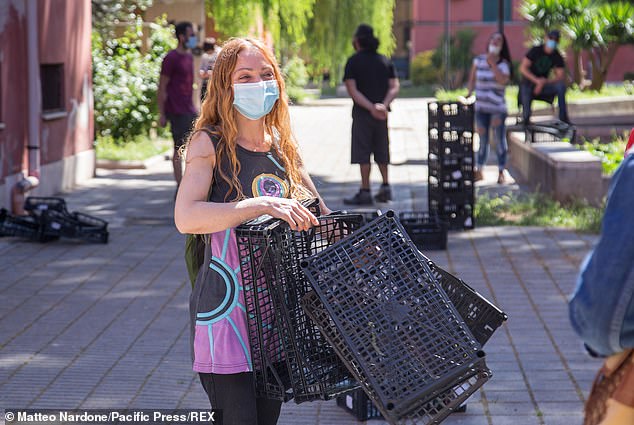 Volunteers of the Quarticciolo District Committee in Rome before the start of a flashmob  against the economic crisis, which took place today in Rome 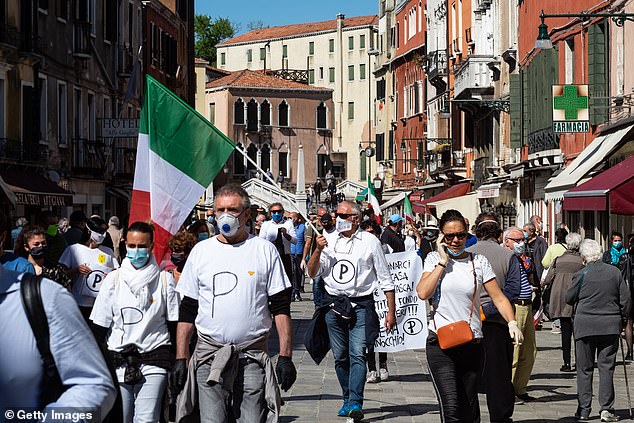 Owners of commercial activities, tourism operators, workers in the hospitality sector, and holders of VAT numbers gather for a flashmob protest asking for an immediate re-opening of the activities on Monday in Venice, Italy

His February salary has yet to surface and she said it doesn’t seem to be coming any time soon, she added.

The 73-year-old is just able to cover her rent with her pension with a little left over to help her daughter, who is also in financial distress.

Giuseppe, 67, who was queuing outside a shop in Naples today told La Repubblica: ‘I pawn a necklace otherwise I won’t eat.’

‘The government won’t help,’ he added.

A worker from the Genoese branch of Carige pawnshops said they were receiving calls from concerned citizens, asking them how the loans work and how much they can lend.

Another woman, who chose to remain anonymous, took a pendant that she said she held ‘very dear’ to another pawnshop, the Monte della Pieta in Rome, where she queued with dozens of others to get an estimate for her valuables. 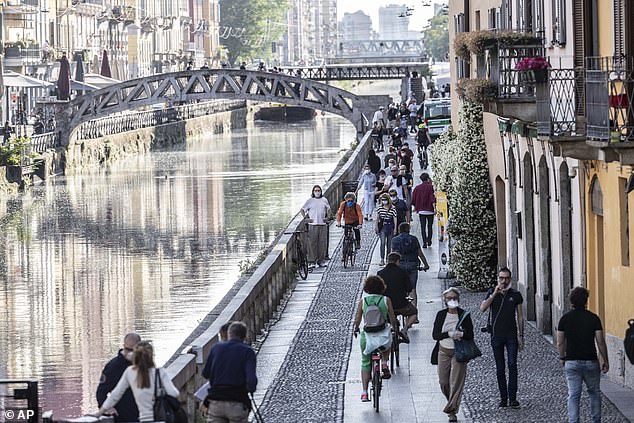 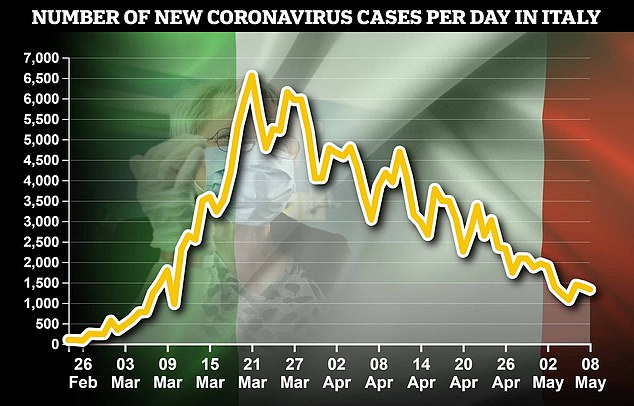 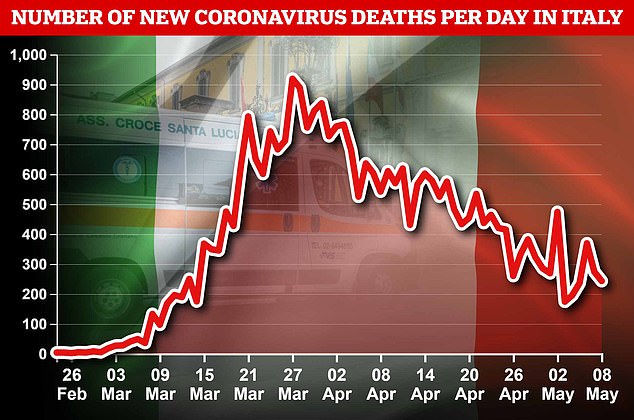 A man in his thirties accompanied by his mother told Corriere: ‘I haven’t been working for two months.’

‘I was employed in a bar that only reopened a few days ago.

‘You [Mother] promised a chain, a memory of my father.

Another couple had come to the store in Rome to offer the jewellery from their daughter’s communion.

‘We don’t even have our faiths anymore,’ the husband said.

Pawnshops were closed across Italy during the country’s nationwide lockdown, but their recent openings have seen customers surging to offer up the little they have. 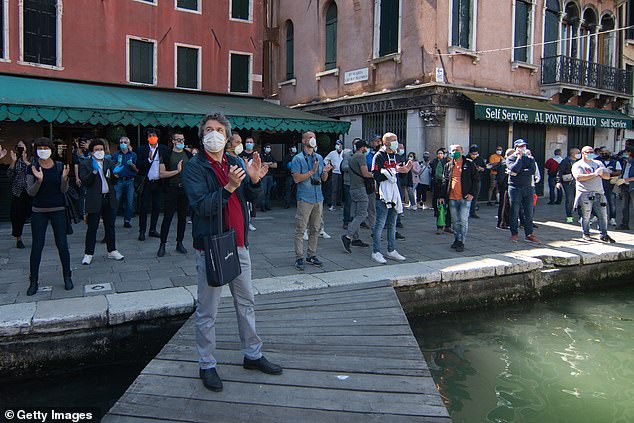 Owners of commercial activities, tourism operators, workers in the hospitality sector, and holders of VAT numbers gather for a flashmob protest asking for an immediate re-opening of the activities on Monday in Venice, Italy

Italy has been battered by the pandemic, both on a human and economic scale,  and today became the third country in the world to record 30,000 deaths from the virus.

According to European Union estimates released Wednesday, Italy’s public debt will hit almost 160 per cent of GDP this year and its economy will shrink by close to a tenth.

Despite the dreary forecasts, the country has been getting used to its ‘new normal’ with people pictured yesterday enjoying the outdoors after strict coronavirus lockdown measures were eased.

Laws which had forbidden Italians from leaving their houses without permits and restricted shopping to supermarkets were eased on Monday, allowing for people to travel within their regions and for markets to reopen. 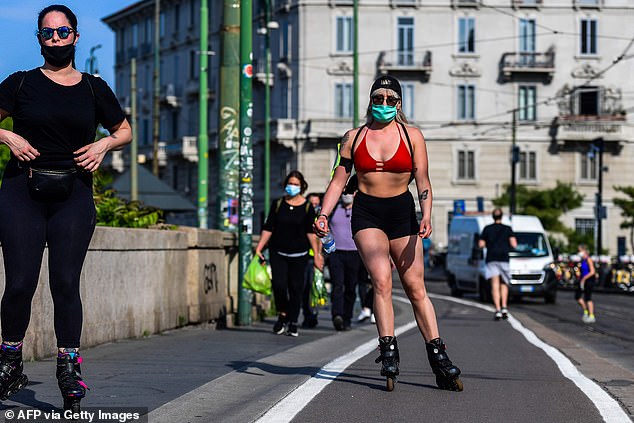 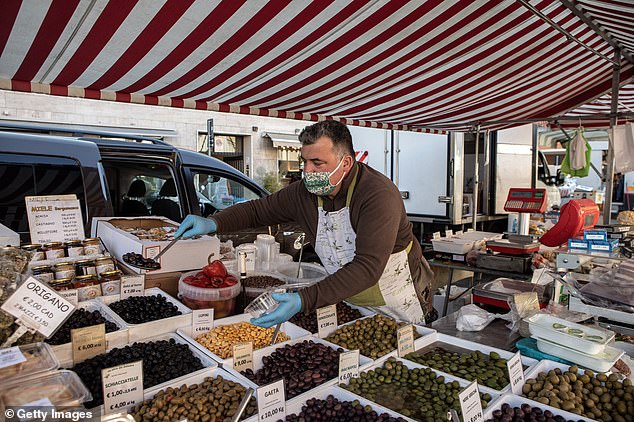 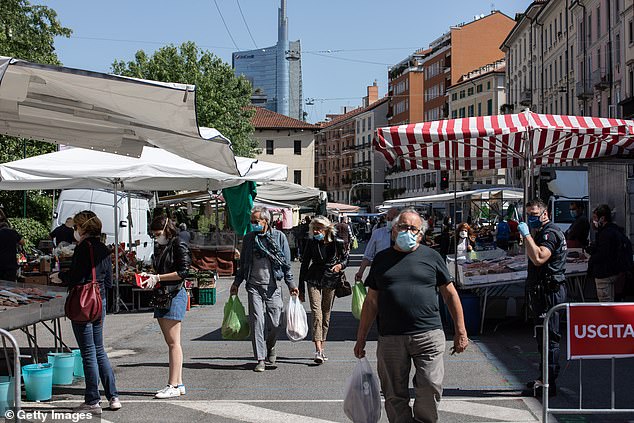 Milan is a ticking Covid-19 ‘bomb’ now people are free to move about after lockdown, an expert has warned. Pictured: a food market in Milan yesterday

Italians were pictured taking advantage of their hard-won freedoms on Thursday while socially distancing after Prime Minister Guiseppe Conte warned measures will come back if infections spike.

Families were pictured soaking up some sun on a near-deserted beach south of Rome, while markets in the Italian capital, Sicily and the hot-spot city of Milan all welcomed back customers.

In a further easing of measures, Conte announced that public Masses will restart from May 18 having been banned as part of his initial coronavirus lockdown measures on March 10. 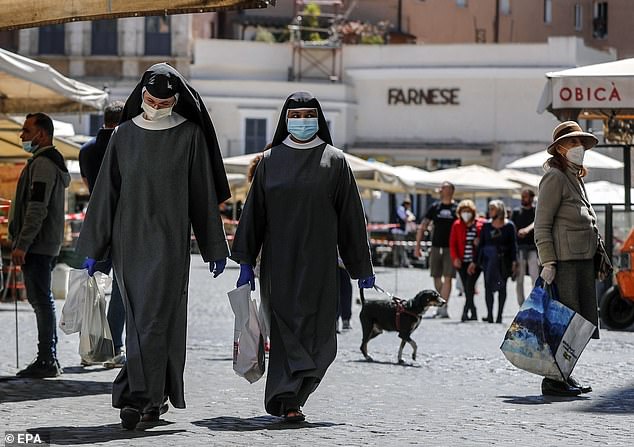 Church services have been added to the list of activities that will be permitted from May 18 after Guiseppe Conte struck a deal with Italy’s top bishops to allow Masses to resume (pictured, two nuns at a market in Rome yesterday) 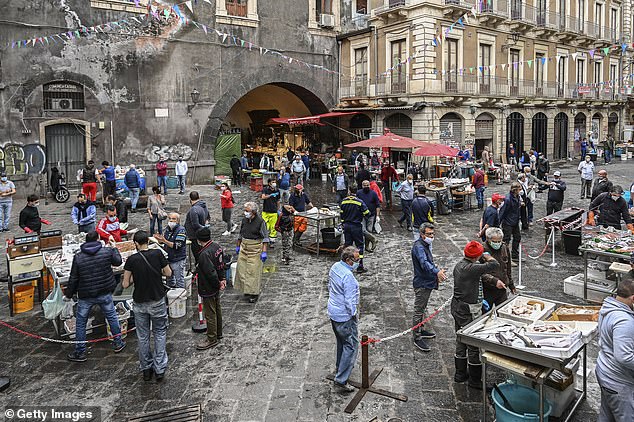 An overview of the historic fish market of Catania, in Sicily, on its first day of reopening on Thursday after it was shut down due to the spread of coronavirus

Today, the country’s death toll rose above 30,000 after the reporting of 243 new fatalities compared with a daily tally of 274 the day before.

Italy’s total death toll from COVID-19 since its outbreak came to light on 21 February now stands at 30,201, the Civil Protection Agency said. Only the United States and Britain have seen more deaths from the virus.

The daily number of new infections fell slightly to 1,327 from 1,401 yesterday, taking the total of confirmed cases since the epidemic began to 217,185, the third highest global tally behind those of the United States and Spain.

People registered as currently carrying the illness in Italy fell to 87,961 from 89,624 the day before.

There were 1,168 people in intensive care on Friday against 1,311 on Thursday, maintaining a long-running decline. Of those originally infected, 99,023 were declared recovered against 96,276 a day earlier.

The agency said 1.609 million people had been tested for the virus against 1.564 million the day before, out of a population of around 60 million.