Final selfie mystery: ‘Accidental’ snap taken by father-of-two, 59, hours after he was last seen out with dog pinged through to family’s iPad at home following their desperate call to police 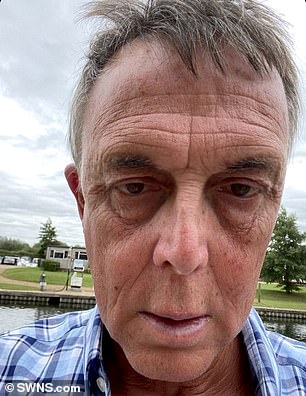 This is the haunting selfie accidentally taken by a dad-of-two just hours before he mysteriously vanished on a riverside walk.

It is believed Stephen Ridley, 59, took the photo by mistake while going on his daily walk at midday on Monday, just shortly before he disappeared.

The photo was automatically uploaded to a linked iPad through the iCloud app, and seen hours later by his wife Denise.

Stephen has not been seen since 3pm on Monday, while he was out walking along the river near his home in Ely, Cambs.

His family say that Stephen had been feeling ‘stressed and anxious’ recently due to coronavirus – and it was not uncommon for him to go out walking for hours at a time.

Stephen’s wife Denise, 55, said that he snapped the selfie around 2pm on Monday – and believed it was taken accidentally, due to the angle of the photo.

The photo was taken near the Riverside Bar and Kitchen opposite Ely Marina.

Denise said: ‘His iPhone is linked to the iPad back at home, so the photo pinged up on there through the cloud.

‘We think he didn’t mean to take the photo – just because the angle of it makes it look like he didn’t know he was taking it.’ 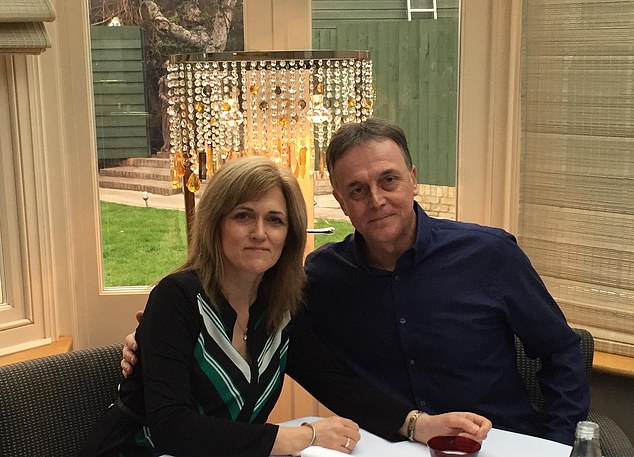 Stephen’s wife Denise (pictured) posted an appeal on Facebook which has since reached almost 3,000 shares and prompted messages of support from concerned well-wishers 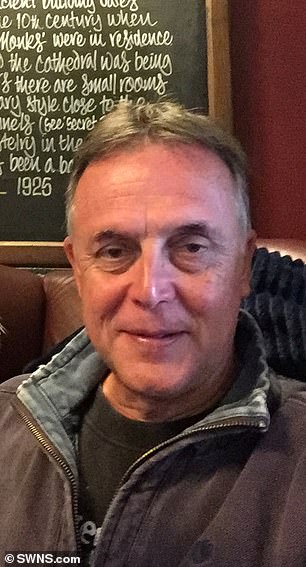 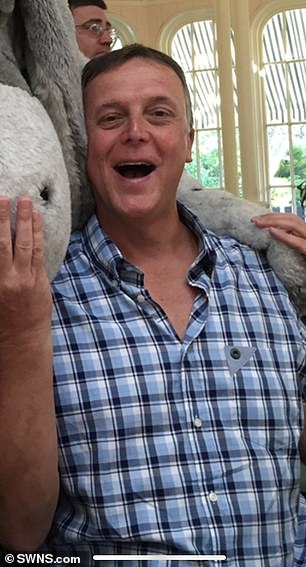 Denise added: ‘He’s been under a lot of stress and anxiety recently – which we now think was more like depression – due to the coronavirus situation.

‘It’s so tough at the moment. It’s affecting everyone in different ways.’

Denise said that Stephen had recently retired from his job at a recruitment agency – prior to which he had got his PhD, studying English writer and philosopher Constance Naden.

She said: ‘He had just recently taken early retirement, and I think he was struggling to find his place a bit.

‘He had all sorts of projects planned – he was trying to set up a copywriting business, and he was also going to write a book about his PhD.

‘But then coronavirus just hit at the wrong time.’

Denise said she last heard from her husband shortly before midday on Monday, when he texted her to say he had been talking to some fishermen down by the river in Ely.

She added that, over the last couple of weeks, Stephen had been going out for multiple walks in a day – and, more recently, had been taking walks for five or six hours at a time.

‘He felt more peaceful when he was outside. He likes boats, he likes fishing,’ Denise added.

‘Everybody in the area had come to know him from seeing him out walking our dog.’

But she added that his disappearance is ‘completely out of character’ for Stephen.

She said: ‘Usually if he’s going to be out later he’ll text and let me know.

‘He texted me at 12pm to say he had been chatting to some fishermen, and he was going to stay out for a longer walk.

‘Then when he didn’t come home at around 4.30pm, which is his usual sort of time, I texted him to ask where he was.

‘I texted him again at 5.30pm, which is normally the time we start getting dinner ready. But I had no reply to either text. That’s when I knew that something wasn’t right.’

Denise phoned the police at 7pm on Monday – and says that it was only after that that she and her two daughters Hannah, 22, and Lily, 13, thought to check Stephen’s iPad – and saw the selfie.

The photo is thought to have been taken at about 2pm opposite Ely Marina and near the Riverside Bar and Kitchen.

Denise and Hannah have been keeping concerned well-wishers updated on Facebook, sharing ‘Missing’ posters for people to print off and post around the Ely area. 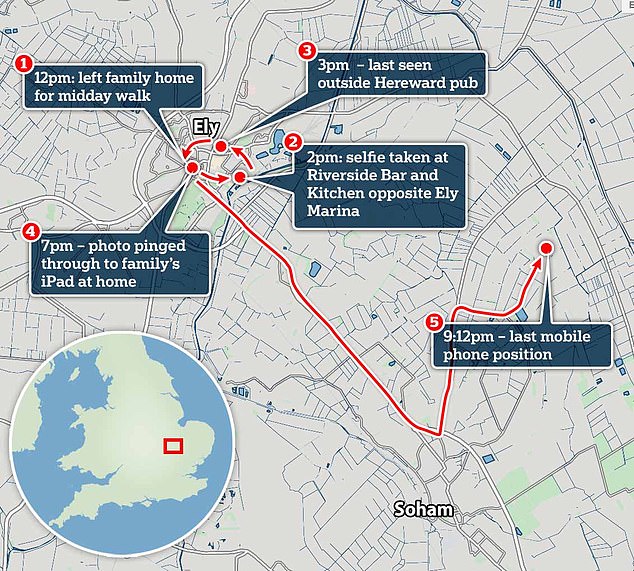 Stephen is believed to have taken the selfie around 2pm on Monday before being spotted near the Hereward pub at 3pm. His last phone location was near Pricklewillow Road at 9.12pm 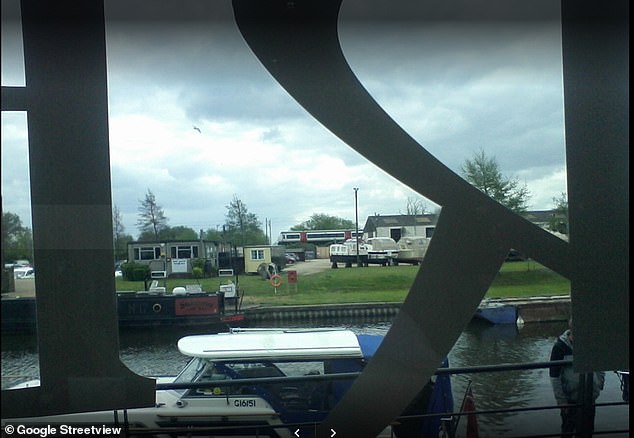 Stephen took a selfie outside the Riverside Bar and Kitchen in Ely which looks onto this boating service area known as Ely Marina. The photo was pinged to the family iPad and found later

A post by Denise appealing for information or help to trace Stephen received almost 3,000 shares and hundreds of comments from the community offering support.

On Tuesday evening, the day after her dad went missing, Hannah posted on Facebook: ‘Unfortunately my Dad hasn’t come home from his walk.

‘He usually comes home around half 5 but obviously hasn’t been back.

‘He was last seen at around 3pm outside the Hereward pub in Ely.

‘The last text we had from him was that he was talking to some fishermen.

‘He loves nature and so we have had many people searching down by the river, including us and the police, but so far nothing.’

In a later Facebook update, Hannah added: ‘His last location on Find my iPhone was at 9.12pm [on Monday] in a field near Parish Bush Drove and Prickwillow Road.

‘There is a big green gate on one of the roads near the field his location was.’

Hannah urged those wishing to join the search for Stephen to stick to roads or designated public footpaths – so as to avoid leading police on a ‘wild goose chase’ tracking the wrong footprints.

Meanwhile Denise added on her Facebook page: ‘We are extremely concerned for his welfare and need him home. 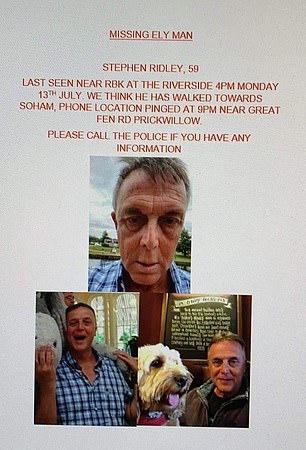 A copy of the missing person poster being shared by Stephen’s family in Ely, Cambs

‘We believe he has been without food or drinks since the day of his disappearance, he does not have access to his car currently so believed to be on foot.

‘He is a keen walker, very interested in nature and spending time around rivers and lakes (he has expressed an interest in fishing and boating) in and around Ely.

‘Please can we ask you to check out-buildings and allotments.’

Denise added: ‘People have been so lovely, and so many people have got involved with searching for him or sharing our Facebook posts.’

Stephen is described by his family as around 5ft 10, of muscular build, with short dark brown hair.

He was wearing a blue and white checkered shirt and beige or blue cargo shorts at the time of his disappearance.

Cambridgeshire Police have been informed, and are conducting dog searches in the area of the field where Stephen’s phone was last located.

Anyone with information as to Stephen’s whereabouts should contact 101, quoting reference 388-13.

A spokesperson for Cambridgeshire Police said: ‘We were called at about 7pm on Monday (July 13) with reports a man had gone missing from his home in Ely.

‘Stephen Ridley, 59, was last seen in Market Street at about 3pm. He was wearing a white and blue checked shirt.

‘Officers have attended his home and attempts to locate him are ongoing.’

French minister asks Trump not to meddle in French affairs