Senior financial advisor, 29, is fined more than £300 after refusing to go home when police caught her drinking pint of beer outside London’s Borough Market after ‘a stressful day’

A senior financial advisor was fined more than £300 after refusing to go home when police caught her drinking a pint of beer outside London’s Borough Market after a ‘stressful day’.

Jessica Cosson was one of dozens of people to appear at a special ‘corona court’ sitting today, in which magistrates were told of several lockdown breaches.

The 29-year-old admitted being told by police to leave when spotted drinking in the capital in November, but refused to do so.

Under lockdown rules at the time, people could buy alcohol through click and collect or other remote methods of ordering, but were not allowed to congregate once it was picked up.

More generally, the restrictions meant people were told to stay at home unless they have a specific reason to leave, such as work which cannot be done from home, as well as exercise and shopping for food or medical supplies.

Gatherings indoors or in private gardens were banned, with people restricted to meeting just one other person from another household outside in a public place.

Cosson was today handed £319 in fines, an increase from £200 for failing to not pay the fixed penalty notice in time. Jessica Cosson, left and right, was one of dozens of people to appear at a special ‘corona court’ sitting today, in which magistrates were told of several lockdown breaches 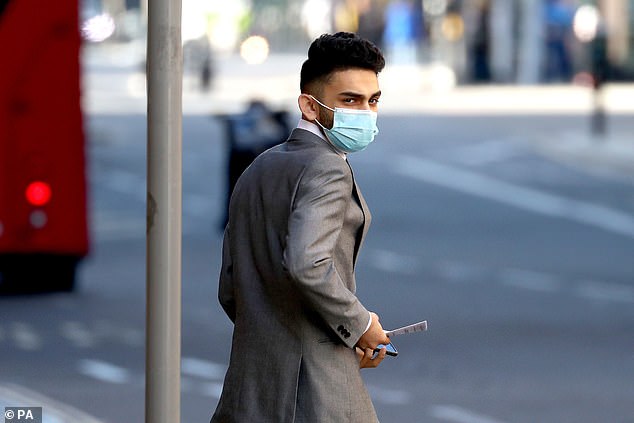 Mobile mechanic Mohammed Haidaire, 25, admitted being present in a car with three people not from his household and was handed a fine of £388 after police noted his ‘blase attitude’ to Covid restrictions

Other breaches heard at City of London Magistrates’ Court today included people accused of attending or hosting a one-year-old’s birthday in Barking, east London, a barbecue in Ilford, Essex, and a rave in Deptford, south east London.

Five people were charged with not wearing a face mask or covering on public transport, while two people continued to have their business open between the hours of 10pm and 5am.

Five people accused of holding a party of more than 30 people faced fines of over £10,000, while five others were accused of participating in an indoor gathering.

One person, charged with keeping their business open, wrote to the court to say they were suffering from Covid-19 symptoms and could not attend.

‘They were warned if they remained they were at risk of being fined.

‘Twenty minutes later the same officers found Ms Cosson and Mr Georgetto having not moved on at all in the intervening time.

‘Officers exited the vehicle, they approached them and asked why they were there and they were unable to provide any kind of excuse.’

Cosson said: ‘I don’t disagree with the statements of facts. ‘I was with a colleague from work.

‘We had some takeaway pints in the Borough Market. I had a stressful day at work and I was offloading and I was living on my own.

‘I regret not taking the police officers’ advice to go home when asked.’

DJs Robert Bagot and Henok Yefru, both 32, admitted attending a rave in Deptford on 22 November last year, but denied hosting the event

She said that as she had recently moved and redirected the post to her office, and as the building was closed, she only became aware of the fine and the court appearance yesterday.

Cosson concluded: ‘I guess I don’t have a reasonable excuse.

‘I had a stressful day, living at home was difficult. We were at work still and finished at 8pm.

‘I just needed to get a few things off my chest, I guess. I’m sorry for that.’

Magistrate chair Andrew Hammond said: ‘It’s extraordinary times we are living through at the moment.

‘In this pandemic, people following lockdown is literally life and death for some people and those who are not following instructions risk the safety and well-being of others.

‘We recognise that across a population individual people have their personal circumstances that inform their behaviour but it’s important everyone complies with lockdown regulations.’

Marian Neagu, 44, a construction worker from Ilford, admitted going to a barbecue with around 20 people on 21 November.

The prosecutor said officers identified the Romanian national as being a resident at the address.

She said: ‘Officers noticed there were numerous cans of alcohol, cooked meats, and a barbecue was still lit in the back garden.

‘The officer says there was a number of people present but in short the officers could not ascertain everyone’s involvement and their role.’ 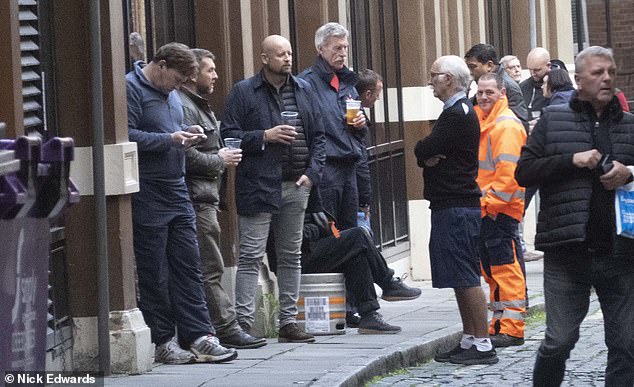 People enjoy takeaway drinks outside a pub in Borough, London on November 10

Duty solicitor Adeela Khan said: ‘He doesn’t have much to say other than he attended the party and he apologises.’

The magistrate handed Neagu a fine of £677, victim surcharge of £68 and prosecution costs of £830 – a hefty increase from the original £200 penalty notice.

Mr Hammond said: ‘Attending such a large gathering during the lockdown isn’t only a criminal offence it is a seriously irresponsible and dangerous thing to do.

‘Whatever the reason for it, it risks the safety of those attending, their households, the police who have to go and break it up, the court staff and other individuals who come into contact with you as part of your prosecution and it is entirely unacceptable.

‘We accept that this was a deliberate disregarding of lockdown rules.’

Full-time student Zakariyas Sugulle, 18, also admitted being present in a car with three people not from his household. He was handed a fine of £319.

Mobile mechanic Mohammed Haidaire, 25, also admitted the same charge and was handed a fine of £388 after police noted his ‘blase attitude’ to Covid restrictions.

DJs Robert Bagot and Henok Yefru, both 32, admitted attending a rave in Deptford on 22 November last year, but denied hosting the event.

‘It’s not disputed there were over 30 people, or indoors, or it would constitute a rave. They were participants, not organisers.

‘There may be some discussion at trial whether if you lend music equipment to a rave whether that constitutes as hosting or organising a gathering.’

The trial was scheduled for 19 July at Westminster Magistrates’ Court.

Romanian national Ino Marku also denied hosting an event, a one-year-old’s birthday party believed to have been attended by 60 people on 14 November in Barking.

Ms Gatland, prosecuting, said: ‘The homeowner said he was having a celebration for a baby who had turned one year old and they were carrying out an important ritual of cutting the baby’s hair.

‘Officers checked the house and in total there were 47 people that didn’t reside there.

‘They explained to him under no circumstances this was acceptable. The officers explained he would be issued a fine and it would come in the post.’

Ms Khan, defending, said Marku was a resident and not the homeowner and did not organise the event. The trial was set for 6 July at City of London Magistrates’ Court.