‘Football messed him up’: Dad of ex-NFL player Phillip Adams who killed doctor, his wife and two grandchildren before turning gun on himself insists his son was a ‘good kid’ as it’s revealed the 32-year-old suffered at least two concussions as a cornerback 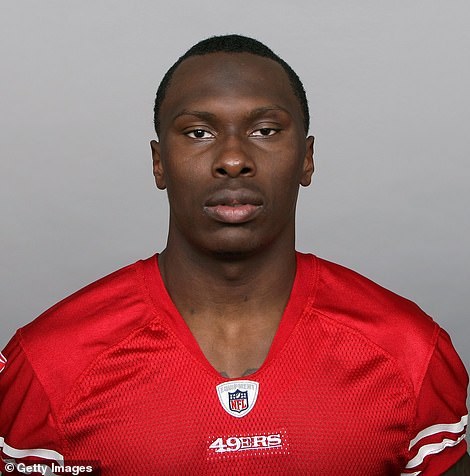 Former pro NFL player Phillip Adams (left) has been identified as the gunman who allegedly carried out a mass shooting in Rock Hill, South Carolina, that killed five, including two children

The gunman who killed five people including a prominent doctor, his wife and two grandchildren in South Carolina, was former NFL pro Phillip Adams, who took his own life early Thursday, it was revealed.

A source who was briefed on the investigation, speaking on condition of anonymity because he wasn’t authorized to speak publicly, said Adams’ parents live near the doctor’s home in Rock Hill, and that he had been treated by Dr Robert Lesslie.

Adams, 32, a cornerback who played six seasons in the NFL and suffered multiple concussions, killed himself after midnight with a .45 caliber weapon.

Adams’ father, Alonzo Adams, confirmed to WCNC that his son was the gunman, and blamed the tragedy on his son’s being a football player.

‘I can say he’s a good kid,’ the father told the station. ‘I think the football messed him up.’

Adams is suspected of shooting dead Lesslie, 70, and his wife, Barbara Lesslie, 69, along with grandchildren Adah Lesslie, 9, and Noah Lesslie, 5, and James Lewis, 38, from Gastonia, who is unrelated to the family.

The Lesslies were found inside their home and pronounced dead, while Lewis, who had been working at the property, was discovered outside. 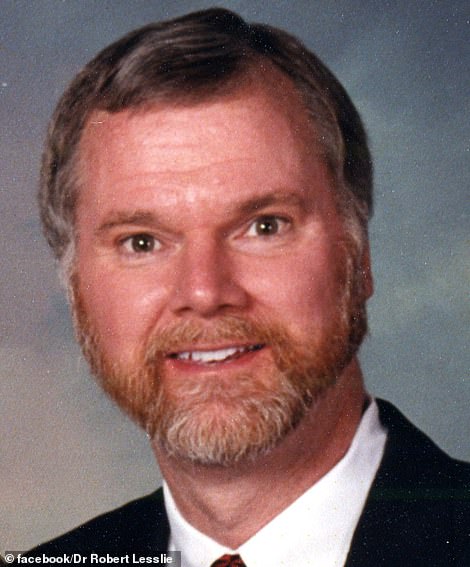 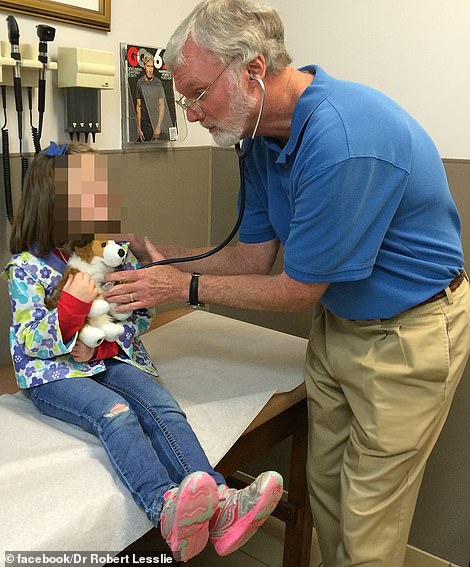 Adams’ former doctor, Robert Lesslie ( left and right), was killed, along with his wife, two grandchildren and a man who was working on the family’s property at the time

This map shows the location of Lesslies’ home where Robert, Barbara and their grandchildren were found dead; their property where James Lewis was killed, and the home of Adams’ parents a short drive away 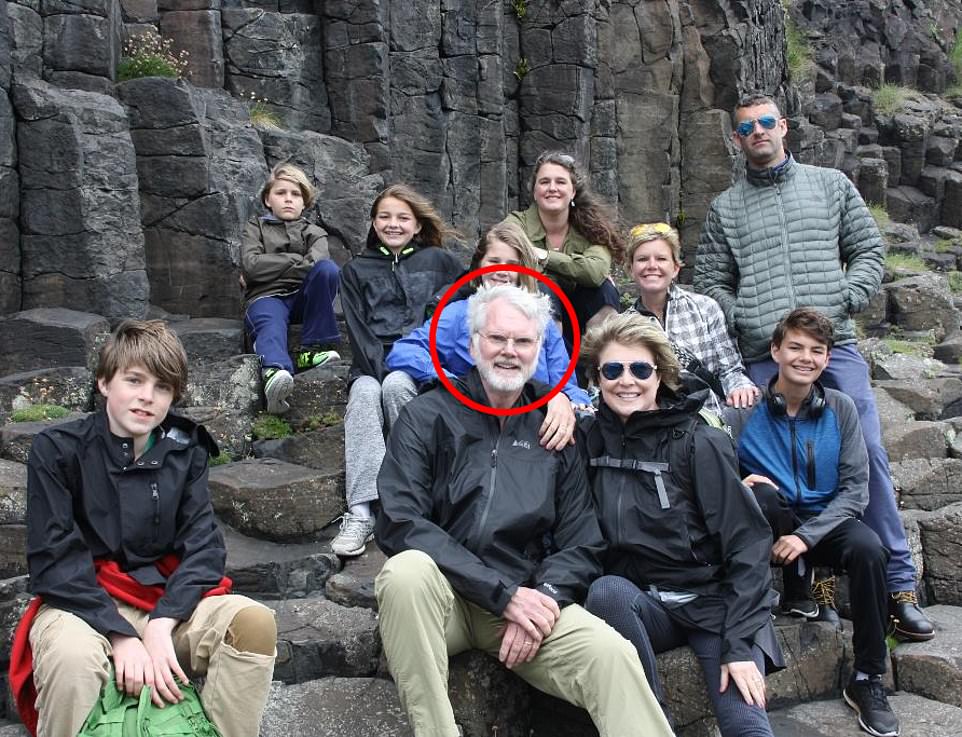 Police were called to the home in the Rock Hill area at around 4:45 pm after gunshots were heard. Pictured above are some members of the victims’ family, including Dr Lessie (center) and wife, Barbara (pictured by his side) 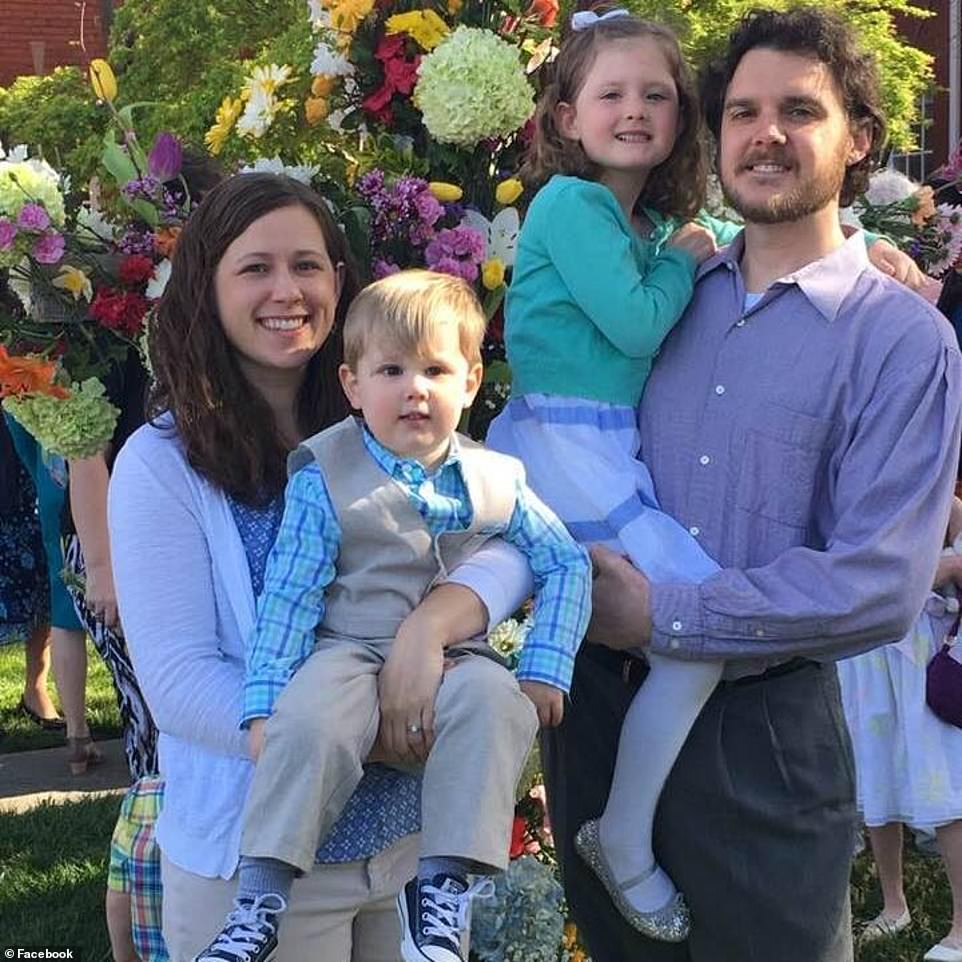 Adah and her brother, Noah, were the children of Dr Lesslie’s son, Jeff (pictured above) 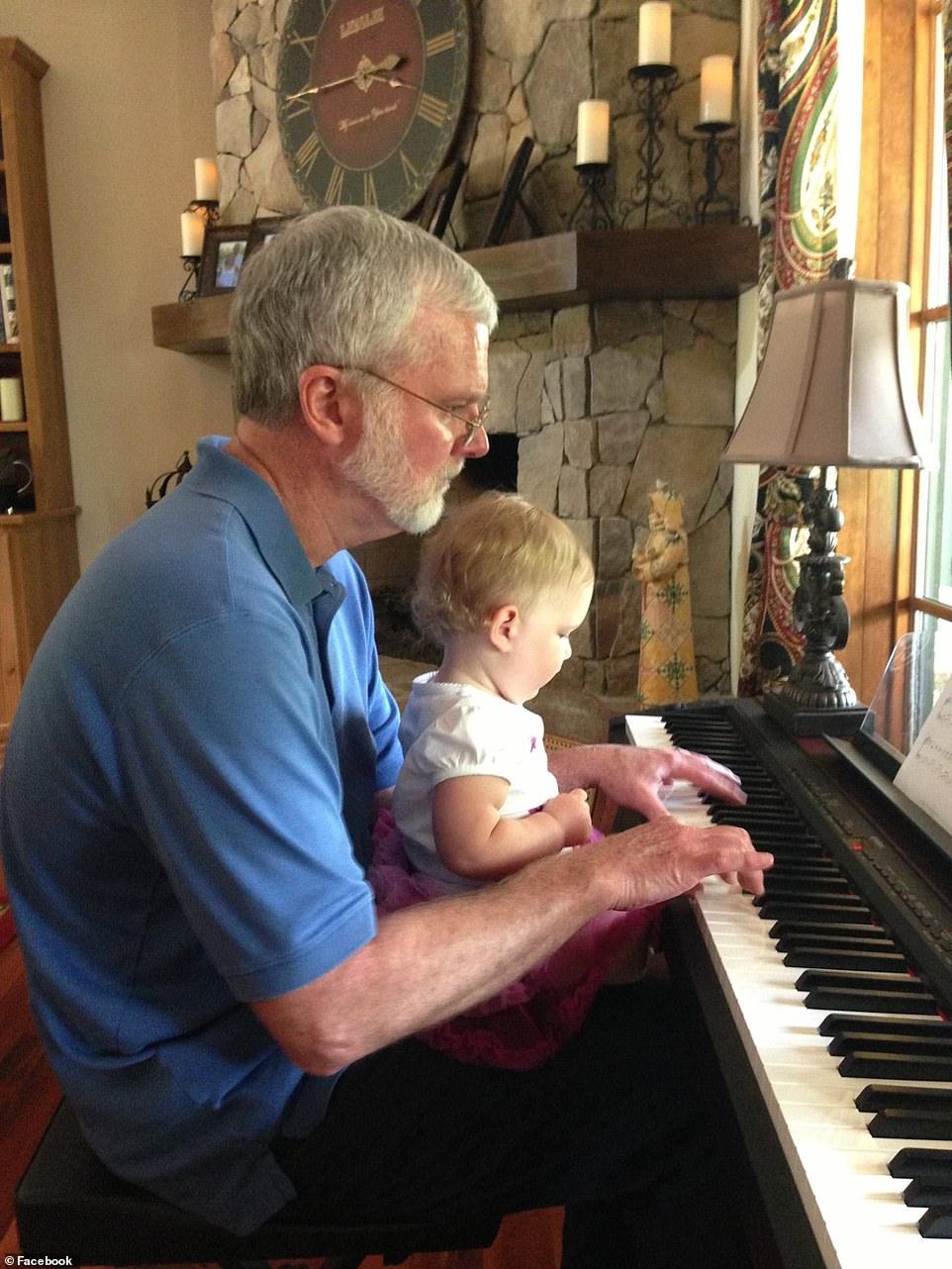 Lesslie is pictured playing the piano with his granddaughter Adah, who was among the people killed on Wednesday 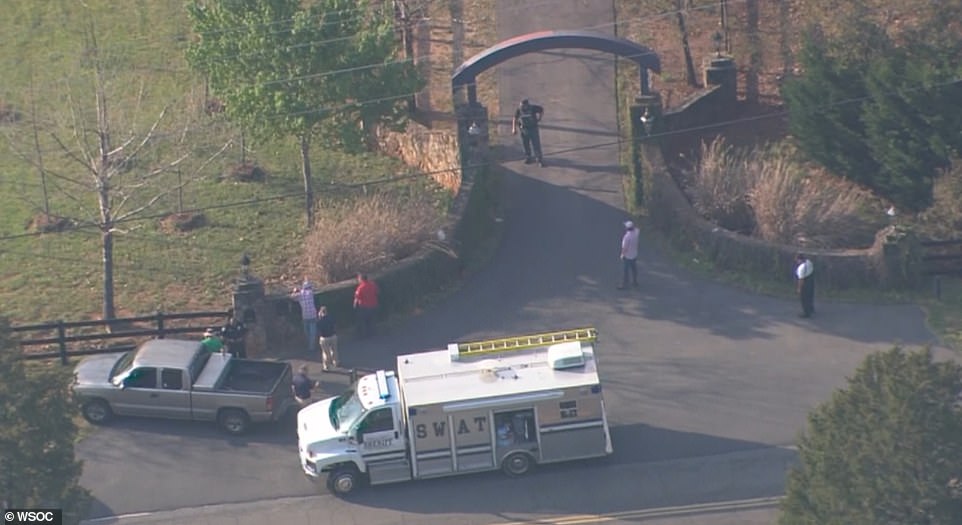 A SWAT vehicle is seen at the scene of the mass shooting on Marshall Road in Rock Hill, South Carolina 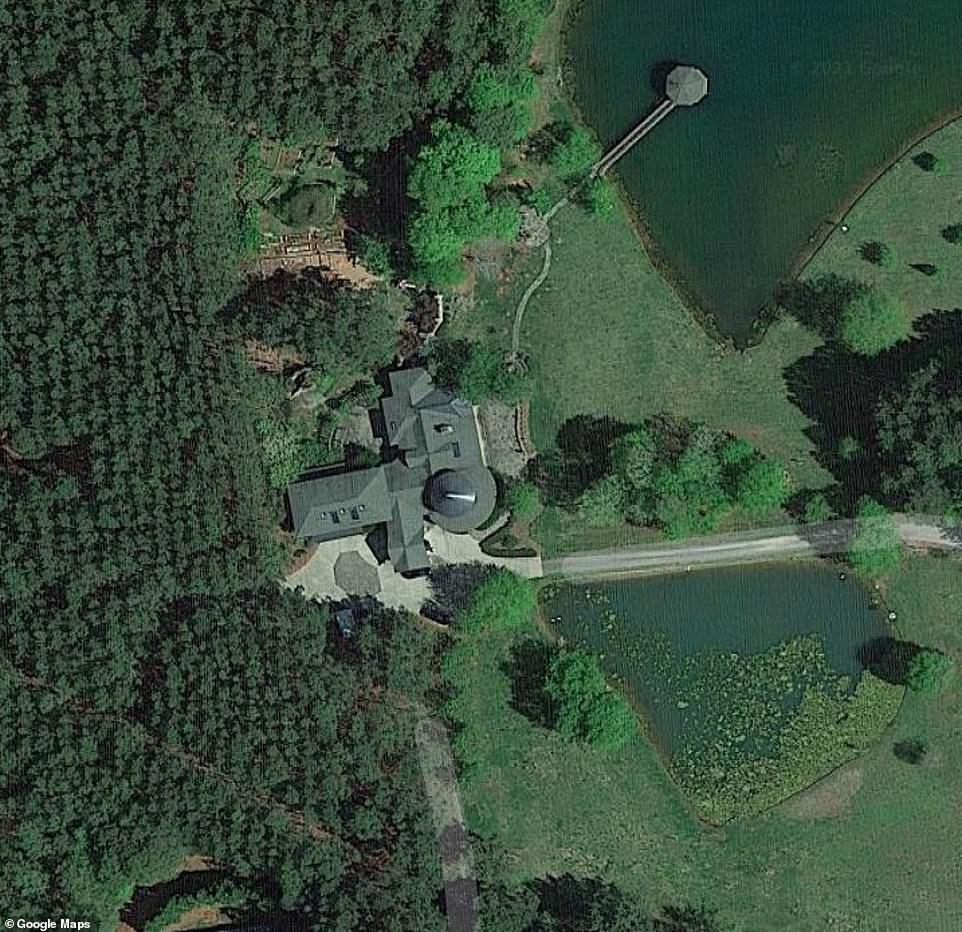 A sixth person, who has not been named, survived the shooting despite being shot multiple times.

WSOC reported that Lewis worked at Gaston Sheet Metal Services in Gastonia and that the person who was wounded in the massacre was also an employee at GSM Services.

‘Both men involved in this incident are long-standing, beloved members of our family at GSM. These men embody the values we strive to achieve at GSM and are family focused, up-beat, and wonderful team members who cared about all the people they encountered,’ read the status update.

The sheriff’s office spent hours searching for the ‘armed and dangerous’ suspect, later identified as Adams, before finding him at his parents’ home on Marshall Road, about a mile away from the Lesslies’ residence.

“I don’t think he ever did anybody any harm,” Alonzo Adams said, before saying he knew the family. “All I can say is we pray for the family. He used to be my doctor a long time ago. I know they were good folks down there. We’re gonna keep them in our prayers.”

Faris said deputies were called to the home in the Rock Hill area around 4:45 pm.

‘We are shocked that this type of incident happened here,’ Faris said. 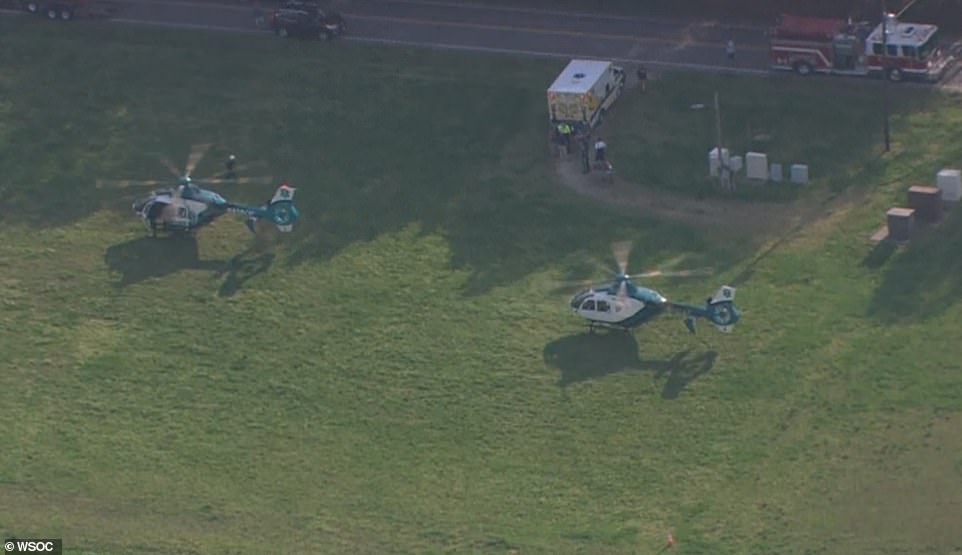 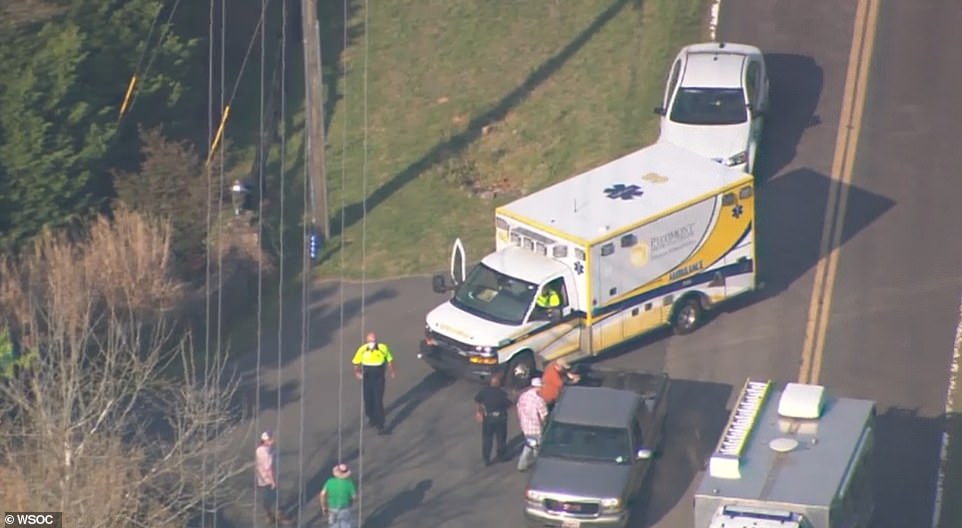 An ambulance is seen at the scene, where one person was found with serious gunshot wounds

No motive has been determined at this time.

‘None of us can figure out why,’ Faris said.

He added: ‘It doesn’t happen here. It’s one of those strange things that a lot of people are going to have a hard time understanding and we just hope that everybody understands that we’re going to do everything we can to try to figure out why this happened here in Rock Hill, South Carolina.’

‘I’ve lived in Rock Hill my entire life and Dr. Lesslie was my doctor growing up,’ Faris said. ‘Dr. Lesslie has been one of those people that everybody knows. He started Riverview Medical Center in Rock Hill and it’s been a staple in Rock Hill for years.’ 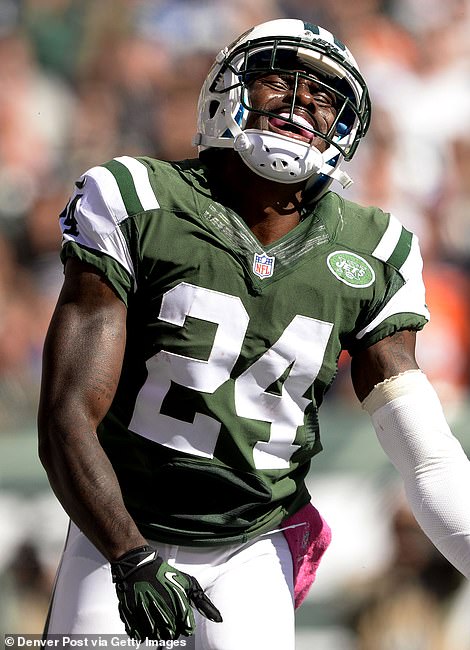 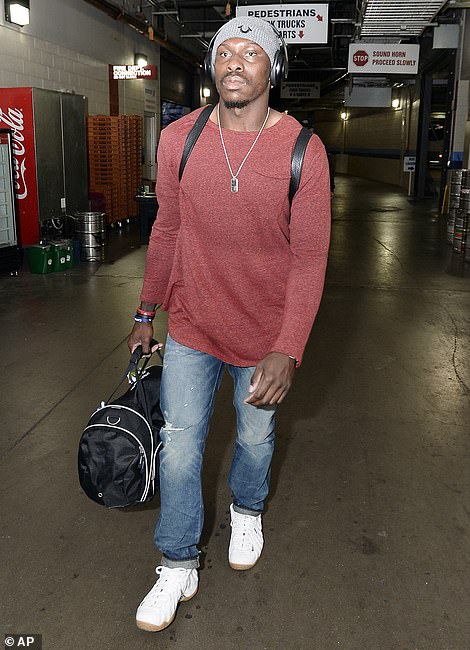 Adams (left and right) was an football cornerback who played in the NFL. He was drafted in the seventh round of the 2010 NFL Draft by the San Francisco 49ers 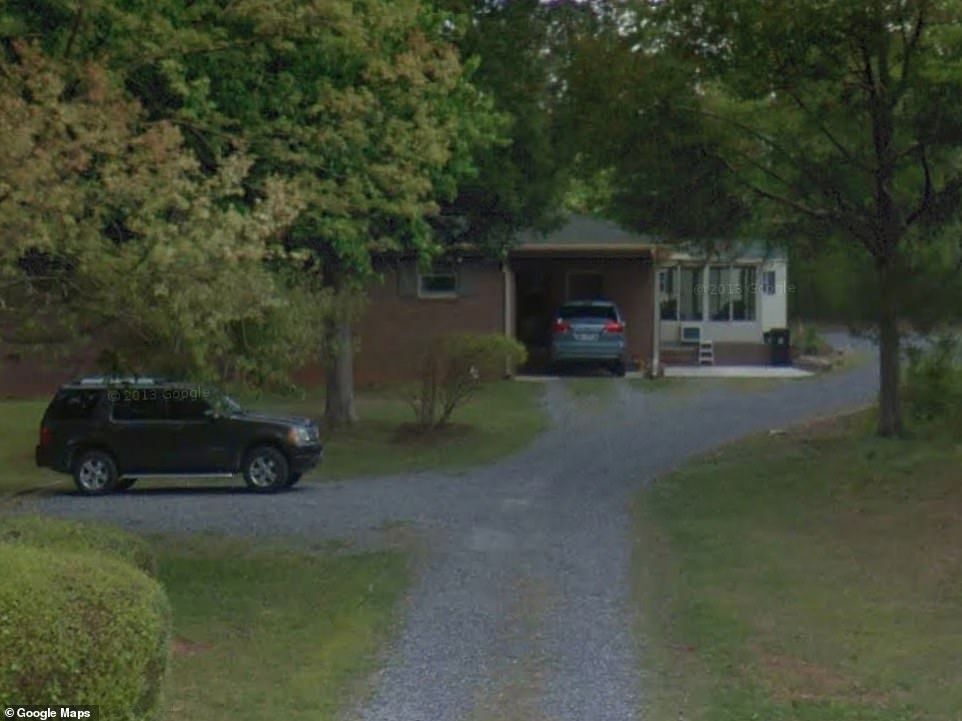 This photo shows the $170,000 home on Marshall Road belonging to Adams’ parents

Adams, a cornerback out of South Carolina State, was a seventh-round NFL Draft pick in 2010. Although he was never a standout in the league, he did play in 78 games over five seasons with the San Francisco 49ers, New England Patriots, Seattle Seahawks, Oakland Raiders, New York Jets, and Atlanta Falcons.

His best seasons came in his two years in Oakland, where he appeared in 31 games and recorded a pair of interceptions.

Rarely a starter, Adams finished his career with the Falcons in 2015.

Adams earned just over $3million over parts of his six NFL season, according to Spotrac.com.

Adams suffered multiple injuries over the course of his football career, including a pair of concussions, which he sustained while playing for the Oakland Raiders in 2012. Despite that, he only missed one game that season.

Raiders spokespeople in Las Vegas did not immediately respond to DailyMail.com’s request for comment on Thursday.

As a rookie late in the 2010 season, Adams suffered a severe ankle injury that required surgery that included several screws being inserted into the leg. He never played for the 49ers again, getting released just before the 2011 season began and signing with New England. Only in 2013 with the Raiders was he on a roster for a full season.

Adams had a criminal record, which included an arrest in 2009 on charges of misdemeanor assault and battery, although he was not convicted. He was also arrested in Charlotte for carrying a concealed gun in 2016. 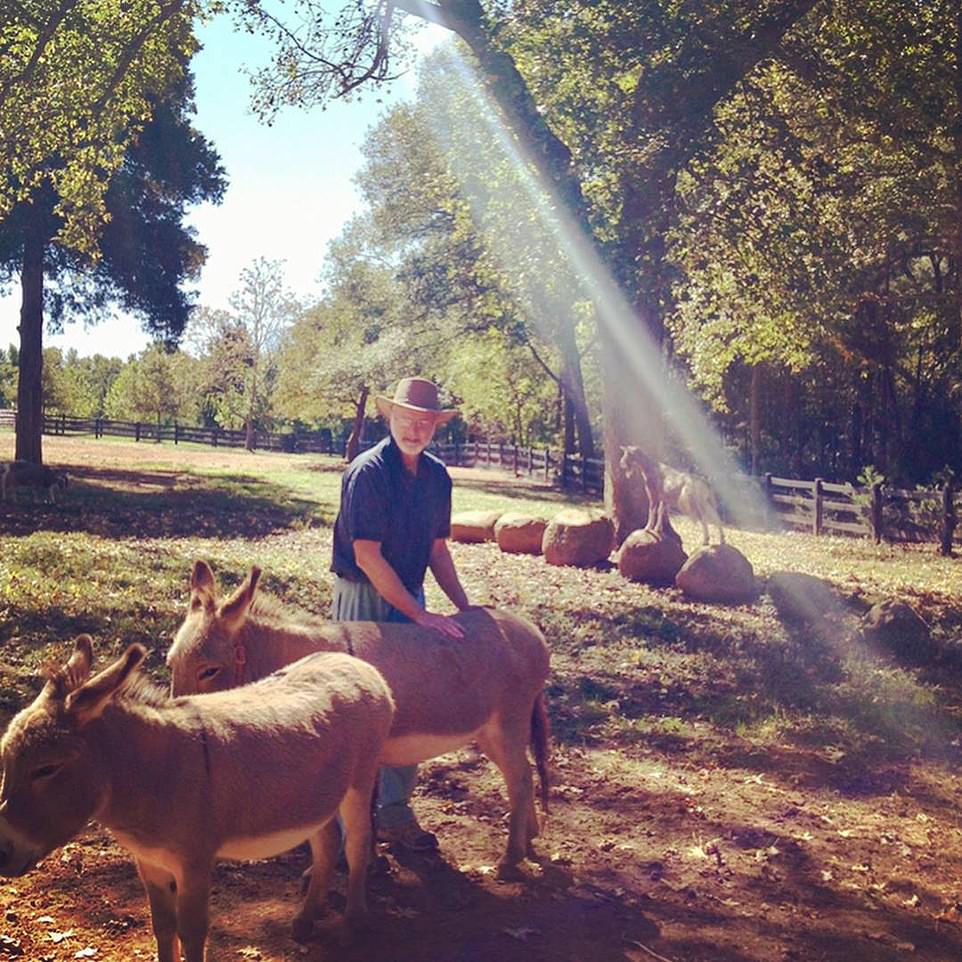 Lesslie described himself in his bio as, among other things, a caretaker of donkeys and goats 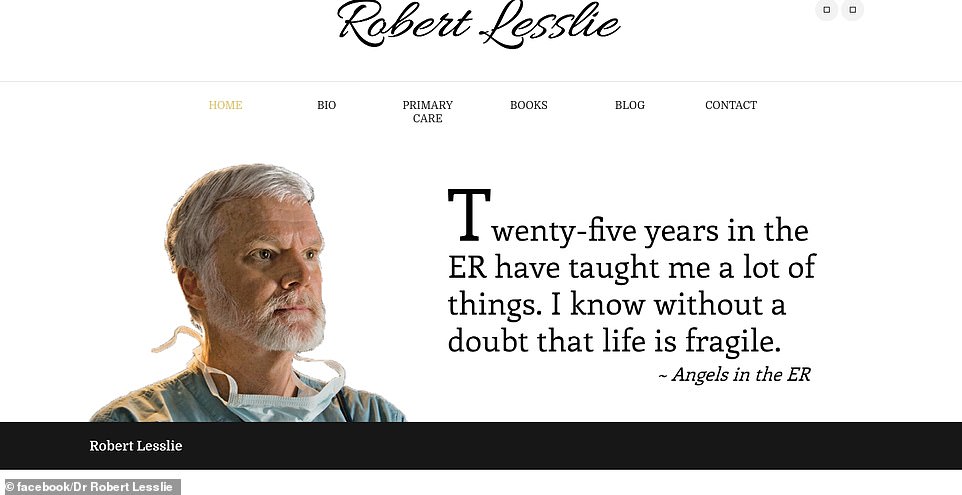 Lesslie authored several non-fiction books, including Angels in the ER

The Lesslie family lived on a large property with an estimated value of more than $1million, according to Zillow.com. They bought the home in 2002.

Phillip Adams’ parents reside in a home located just a 2 minutes’ drive from the Lesslies. That property has an estimated value of just over $170,000.

A biography page of Dr. Lesslie stated he and his wife of 35 years raised four children.

He described himself as a ‘believer, husband, father, grandfather, physician, friend and caretaker of golden retrievers, donkeys, ponies & goats, gardener and lover of the outdoors, bagpiper, golfer (significantly handicapper), author.’ 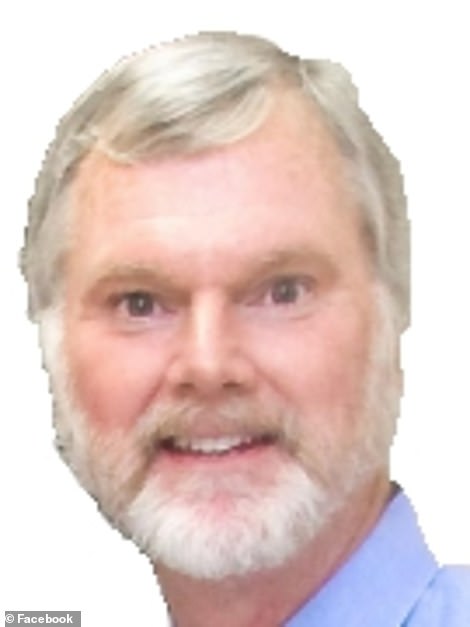 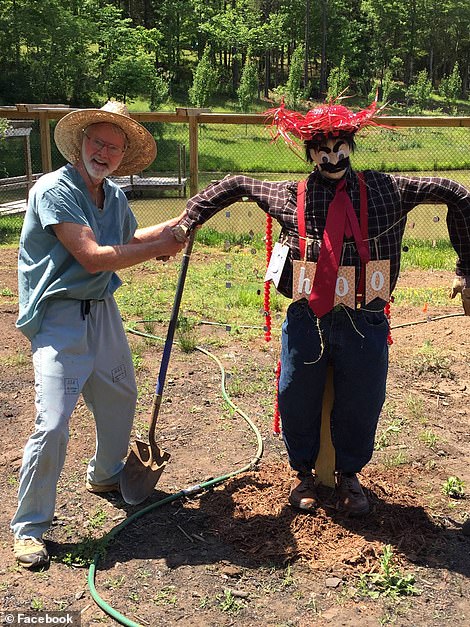 Lesslie (left and right) had been practicing medicine in Rock Hill since 1981. He and wife Barbara are survived by their four children 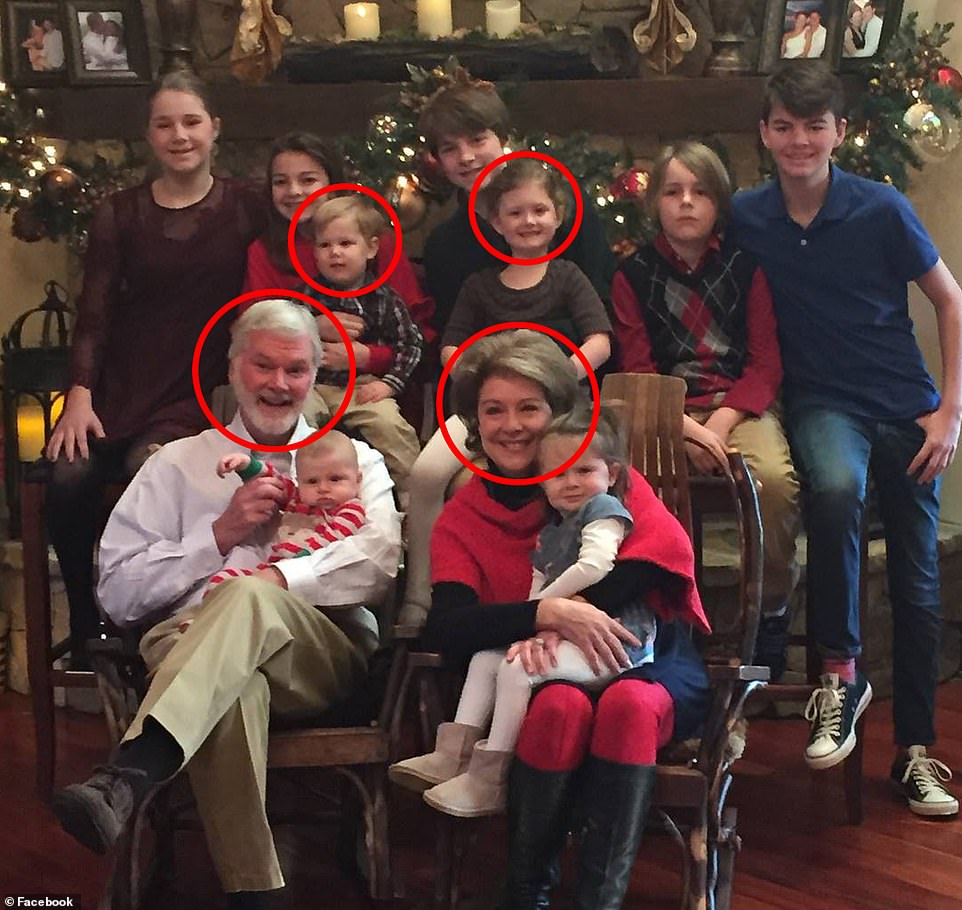 This photo showing Dr Lesslie, his wife and their two grandchildren who perished in the massacre on Wednesday (circled in red)

Dr. Lesslie had been practicing in Rock Hill since 1981, according to the Riverview website.

He received his degree at the Medical University of South Carolina and had worked in the surrounding Rock Hill area and in emergency rooms in Charlotte, North Carolina.

He was the author of several non-fiction books about stories from the emergency room, including Angles in the ER.

In that book, he wrote: ’25 years in the ER have taught me a lot of things. I know without a doubt that life is fragile.’

Rock Hill is a city in northernmost South Carolina about 25 miles southwest of Charlotte, North Carolina. Boasting a population of more than 66,000 people, Rock Hill is the largest city in York County.

Rock Hill is a manufacturing city that offers scenic riverfront views along the Catawaba River, and it is home to three colleges, including Winthrop University.

According to the latest data, Rock Hill’s crime rates were 61 per cent higher than the national average.

Sales assistants, taxi drivers and even chefs at higher risk of death from coronavirus