The WHO launched a plan in the middle of last year to eradicate cancer’s most treatable form from the globe, and held a major event in Geneva early on Thursday morning to mark the progress made 12 months on. 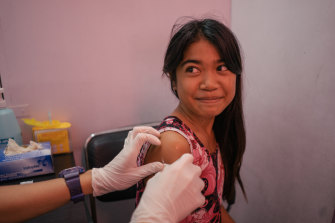 A young girl from Tondo, Manila, is seen in a Likhaan clinic for her free HPV vaccination.Credit:Hannah Reyes Morales/MSF

Australia is one of the globe’s leaders in vaccinating against the disease following former Australian of Year Professor Ian Frazer’s creation of the first vaccine against human papillomavirus (HPV) – the virus that causes cervical cancer. Canberra is supporting the WHO’s eradication quest.

The number of cervical cancer deaths in Australia has halved since the start of the world-first rollout in 2007 of the HPV vaccine to Australian children aged 12-13 years old.

But worldwide, a woman dies from the disease every 30 seconds and 90 per cent of the world’s 300,000 cervical cancer deaths occur in women who live in low and middle-income countries.

In a pre-recorded video message played at the WHO event, Australia’s Health Minister Greg Hunt committed an extra $5.8 million dollars towards achieving the goal of eradicating cervical cancer in Australia by 2035.

The government will spend nearly double that amount this year alone on its high performance, well-being and integrity 2030 sport plan. 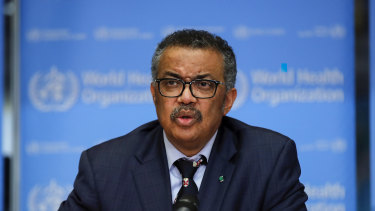 Dr Tedros Adhanom Ghebreyesus, Director-General of the World Health Organisation at WHO headquarters in Geneva.Credit:Bloomberg

WHO Director-General Dr Tedros Adhanom Ghebreyesus said richer countries and the pharmaceutical countries needed to do more to help share Australia’s success with women at risk elsewhere – the same call he has made seeking better international cooperation to help end the COVID-19 pandemic.

“Of course, COVID is acute and everybody’s now focussed because it’s an emergency and as you rightly said cervical cancer is a silent killer and it’s not really as visible as the emergency we’re facing now, but losing two women every one minute is not a small problem, it’s a big problem,” he said, responding to a question from this masthead.

“As we speak, 80 countries have not started vaccination, and they contribute to two-thirds of the deaths we see now,” he said.

“Losing two women every one minute is not a small problem, it’s a big problem.”

But he said this would require resources in the form of tests, drugs and vaccines.

“There should be support from countries and donors and foundations to contribute in terms of resources.

“So we need to approach cervical cancer the same way.”

Australia’s Ambassador and permanent representative of Australia to the UN in Geneva Sally Mansfield said Australia’s experience showed the eradication of cervical cancer is an “obtainable public health goal”. 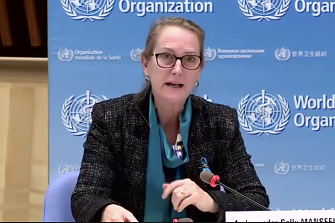 Australia’s Ambassador and permanent representative for Australia to the UN in Geneva Sally Mansfield.Credit:Screengrab/WHO

She said Australia was working to help with the regional rollout of HPV vaccines in the Indo-Pacific.

Indonesia has not yet started a national rollout of the HPV vaccine but there have been small-scale demonstrations in five provinces, including Bali.

Why is Walled Lake High School on lockdown?