Another food lifeline bombed by Vladimir Putin… the starving forced to cook in the streets… it’s no wonder they need your help: As Russian leader is accused of trying to ‘exterminate Ukrainians’, how Mail Force donations could help to ease the pain

Vladimir Putin was accused of trying to ‘exterminate the Ukrainians’ last night after wiping out food stocks in a key city sheltering thousands.

Missiles have rained down on the city of Sievierodonetsk for days, destroying all food depots, markets and shops as the Kremlin aims to capture the entire region.

The city’s 100,000 population has now dwindled to about 17,000 and they face an uncertain future without urgent humanitarian aid.

Those left behind, unable or unwilling to flee, have so little left they have resorted to cooking in the street, not knowing when the next bombardment will come.

Luhansk, in eastern Ukraine, is one of the first destinations for emergency food boxes sent by the Mail Force charity.

In a joint mission with the Ukrainian embassy in London, the Mail Force consignment is making its way through the war-torn country to reach desperately hungry families. 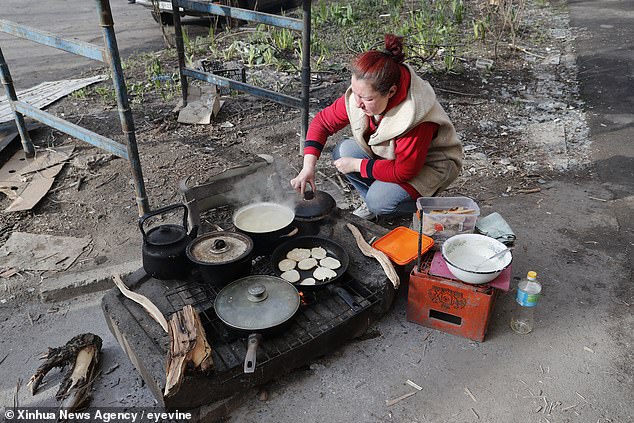 Those left behind, unable or unwilling to flee, have so little left they have resorted to cooking in the street, not knowing when the next bombardment will come

Yesterday the governor said: ‘There is no single food warehouse left in Sievierodonetsk. The Russians have destroyed them all.

‘The purpose of the invaders is obvious. They want to create a humanitarian catastrophe in the Luhansk region. The Russians are destroying all buildings that can contain food. Putin’s goal is to exterminate the Ukrainians.’

Mr Haidai added: ‘We are sincerely grateful to those who have extended a helping hand to Ukraine in this difficult time Every resident of the Luhansk region thanks you for your kind hearts.’

The first delivery of more than 2,400 boxes of food aid paid for by Mail readers arrived in Ukraine yesterday. It is the first batch among 500,000 boxes bought with such money. Each food box has 14 items – including pasta, porridge, tinned meat, fish and vegetables – and contains enough calories to feed an adult for a week.

The ambitious scheme is costing £8million, with half coming from Mail Force and the other half from the Ukrainian embassy. But Mr Haidai, the leader of the pro-Kyiv regional administration, warned deliveries are ‘extremely dangerous’ because Russia ‘deliberately fires on volunteers and humanitarian supplies’.

A senior Ukraine government source said: ‘The Russians are targeting food queues. They are looking for gatherings of people trying to get food and using them as the place to target their weapons. It is despicable. These are not military targets, they are civilians who are hungry.’

Svetlana Popova, senior aide to Mr Haidai, said: ‘There is not a single food shop left in Sievierodonetsk. The last one was bombed overnight. People get their food only and solely from humanitarian aid. 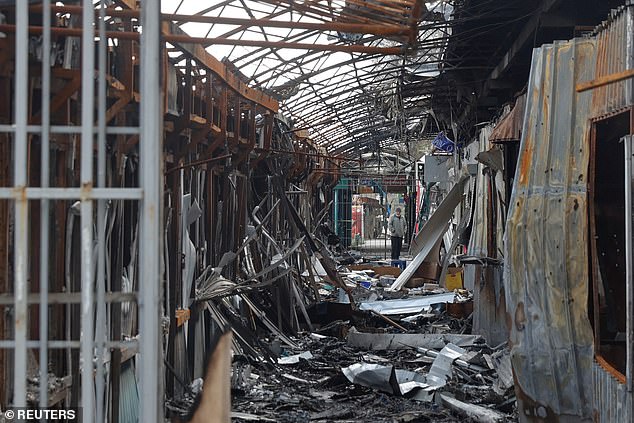 Missiles have rained down on the city of Sievierodonetsk for days, destroying all food depots, markets and shops as the Kremlin aims to capture the entire region. A bombed out market is pictured above

‘We deliver it to bomb shelters, basements and other hideaways, and there are already volunteers killed while delivering the humanitarian aid. A female volunteer was killed while on [the] way to deliver food in Lysychansk weeks ago.

‘Last week a man and wife who both volunteered for residents were hit by shelling right when they brought the food.

‘The man died, his wife is still fighting for life in intensive care. The head of Popasna administration went under shelling right when he was delivering the aid in his car. He suffered concussion, but survived. Last week Russian troops deliberately aimed at bread-delivering cars, three of them caught fire.

‘The actions of the Russian Army confirm their task is to destroy all communications, and starve local residents. It is clear Putin aims to bring us into true Holodomor [Great Famine].’

Mr Popova added: ‘We stopped reporting on what we repaired, because as soon as we do, literally within less than an hour, they shoot at exactly what we have just repaired. The Russian Army is creating a humanitarian catastrophe.

‘We are doing everything in our power to help people survive – which is why we are so incredibly grateful to everyone who contributed to this particular humanitarian aid. What your Mail readers, and other contributors have done, is incredible. You are saving people, saving lives.’

The record-breaking Mail Force Ukraine Appeal – which has now raised more than £11million – has been praised by Boris Johnson and Volodymyr Zelensky.

Donations have already gone to help Ukrainians refugees who have fled the conflict, or those who are still in their homeland under the constant threat of bombardment from the Russian invaders.

The appeal was started with a £500,000 donation from the paper’s parent company DMGT at the request of chairman Lord Rothermere and Lady Rothermere. 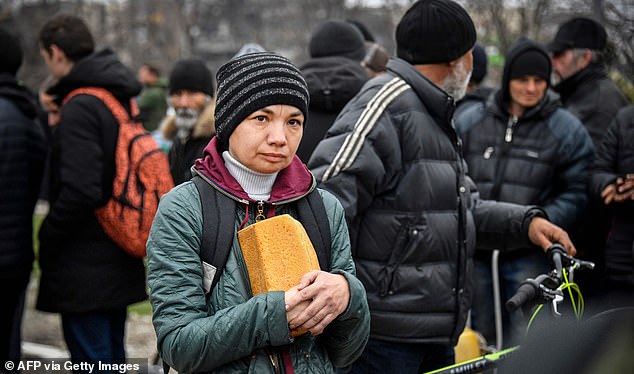 The city’s 100,000 population has now dwindled to about 17,000 and they face an uncertain future without urgent humanitarian aid

Deliberate attacks on food supplies and aid convoys by Russia would be a war crime under the Geneva Convention.

The UN and the EU in recent days have hit out at the Kremlin for trying to use hunger as a ‘weapon of war’. The term will evoke the terrible horrors of Ukraine’s Holodomor in which Joseph Stalin starved millions to death.

He seized food supplies between 1932 and 1933 in his brutal enforcement of collective farming. Ukraine has been described as the world’s breadbasket because it is a major global exporter of cereals such as maize and wheat, causing food prices to spike worldwide.

Yesterday the United Nations warned many Ukrainians could die without urgent assistance to tackle ‘the grave humanitarian crisis’.

But one top official praised kind-hearted Mail readers. Saviano Abreu from the UN’s humanitarian agency said: ‘Any support is more than welcome. We have to thank the generosity of the people everywhere in the world who are trying to support the people in Ukraine.’

Readers of Mail Newspapers and MailOnline have always shown immense generosity at times of crisis.

Calling upon that human spirit, we are now launching an appeal to raise money for refugees from Ukraine.

For, surely, no one can fail to be moved by the heartbreaking images and stories of families – mostly women, children, the infirm and elderly – fleeing from Russia’s invading armed forces.

As this tally of misery increases over the coming days and months, these innocent victims of a tyrant will require accommodation, schools and medical support.

All donations to the Mail Ukraine Appeal will be distributed to charities and aid organisations providing such essential services.

In the name of charity and compassion, we urge all our readers to give swiftly and generously.

TO MAKE A DONATION ONLINE

To add Gift Aid to a donation – even one already made – complete an online form found here: mymail.co.uk/ukraine

Via bank transfer, please use these details:

TO MAKE A DONATION VIA CHEQUE

TO MAKE A DONATION FROM THE US

You can donate via CAF America at: https://donations.cafamerica.org/mail-force/

US readers can donate to the appeal via a bank transfer to Associated Newspapers or by sending checks to dailymail.com HQ at 51 Astor Place (9th floor), New York, NY 10003.

Checks in the US need to be made out to ‘CAF America’ and have ‘Mail Force Ukraine Appeal’ in the memo.