Detectives say one of two gunmen who crashed into a fire hydrant after shooting ex-Mongols bikie Suleiman “Sam” Abdulrahim also tried to hide in a restaurant garbage bin when fleeing the crime scene.

Police have released CCTV footage of two men they say were in a Mazda SUV when they ambushed and shot Abdulrahim, 30, multiple times as he left a funeral at Fawkner cemetery in June. 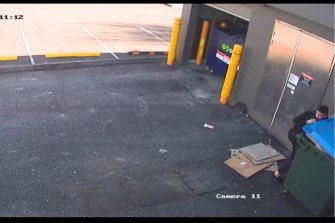 A still taken from CCTV footage released by police showing a man attemtping to hide in a recycling bin at the rear of a fast food restaurant on Sydney Road in Fawkner.Credit:Victoria Police

The Mazda sped away from the scene before crashing into a fire hydrant and a pole on Box Forest Road, near Sydney Road, where the pair ran from the damaged vehicle.

The footage shows one of the alleged offenders, dressed in black and attempting to hide his face with an item of clothing, climbing into a bin filled with cardboard boxes near a fast food restaurant on Sydney Road.

He momentarily hides in the bin before climbing out and walking away, the CCTV vision shows.

The second man allegedly carjacked a woman and child at gunpoint, taking a Ford Territory wagon that police later located at Brunswick Drive in Epping

Police also believe one of the men attended a hardware store in Epping on June 15, 10 days before the shooting, purchasing two petrol cans that were later located in the crashed Mazda SUV.

Detectives believe the petrol cans were purchased for the purpose of destroying the vehicle after the shooting.

“We are committed to targeting those involved in this type of offending and holding them to account.”

The offenders are perceived to be of Middle Eastern appearance, police said, aged between 18 and 20 years old, and are of medium build.

Following the ambush Abdulrahim, a Preston man, was taken to Fawkner Police Station in a Mercedes station wagon with gunshot wounds. 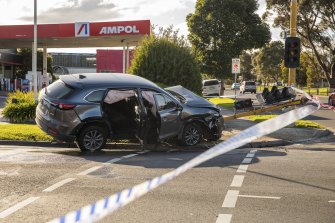 Police say the car involved in the June shooting crashed into a fire hydrant and pole on Box Forest Road, near Sydney Road.Credit:Paul Jeffers

He was then transported to hospital in a critical condition and later released.

Anyone who witnessed the incident, with CCTV/dash cam footage or with information on the men in these images is urged to contact Crime Stoppers on 1800 333 000 or online at www.crimestoppersvic.com.au