Pope Francis on Wednesday called for Catholics around the world to give up trolling on social media for Lent, saying believers should observe a fast not just of food but of online insults in order for them to get nearer to God in the run-up to Easter. 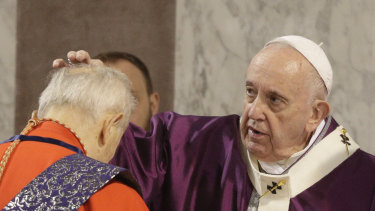 Pope Francis puts ashes on the forehead of Cardinal Jozef Tomko in the Santa Sabina Basilica during the Ash Wednesday Mass opening Lent, the forty-day period of abstinence and deprivation for Christians before Holy Week and Easter.Credit:AP

The Pope issued his appeal for more online decorum in an address to 12,000 people in St Peter's Square for his general audience on Ash Wednesday, the start of the 40-day period that leads up to Easter.

Lent, he said in remarks that were apparently off-the-cuff, "is a time to give up useless words, gossip, rumours, tittle-tattle and speak to the Lord on first name terms".

"We live in an atmosphere polluted by too much verbal violence, too many offensive and harmful words, which are amplified by the internet," he said.

"Today, people insult each other as if they were saying 'Good Day'." 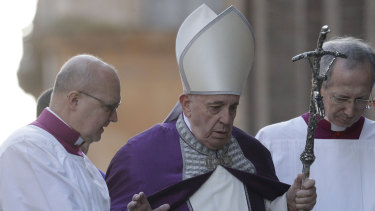 Pope Francis walks in procession to the Basilica of Santa Sabina before the Ash Wednesday Mass.Credit:AP

Last September, he hit back, saying that while he welcomed "constructive criticism" he had no time for "those who smile while stabbing you in the back".

"We are in a place where people use social media really as a bully pulpit," said Helen Osman, president of Signis, an international association of lay Catholic communication professionals.

"People are worried about how social media are being used to create disunity or divisiveness… It does give the perception that we are a church internally in tension and maybe even in division," she told US newspaper the National Catholic Reporter.

Yesterday, the pontiff celebrated Ash Wednesday in traditional fashion, having ashes rubbed on his forehead to remind Christians of mortality and that everyone will one day become dust.

Trafalgar Square will be filled with Commie statues if Corbyn is PM, Alan Sugar blasts