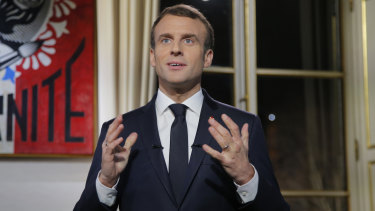 Emmanuel Macron’s government has been besieged by ”yellow vest” protests.Credit:AP

The list of insults, particularly on the Italian side, has grown long, and progressively more outrageous as the Italian populist leaders try to score political points at home by attacking backers of the vision of a united Europe – French President Emmanuel Macron first among them.

But the final straw appears to have come on Tuesday, when Italy's Deputy Prime Minister, Luigi Di Maio met a leader of the ”yellow vest” protesters who have besieged Macron's government with violent demonstrations.

Di Maio, the political leader of the Five Star Movement, and Alessandro Di Battista, a rabble rouser who many consider the party's leader-in-waiting, posted a picture on their social media pages of a meeting near Paris with Christophe Chalencon, an organiser of the yellow vest movement from the south of France who has called for civil war. 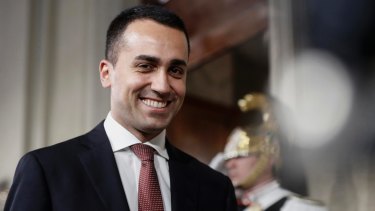 The French, in a statement from the foreign ministry, denounced the meeting as "an additional and unacceptable provocation" that "violated the respect that is owed to the democratic choices made by an allied and friendly nation."

The widening dispute no doubt has had comic-opera overtones, with its outlandish insults from the Italians — France should get rid of its "very bad president", the Italian far-right leader and Interior Minister Matteo Salvini said recently — and its injured dignity on the French side. "Outrageous declarations" had been aimed at France by Italy, the French Foreign Ministry huffed on Thursday.

But beneath the provocation and posturing there is a serious undercurrent, recognised by both sides: a battle for Europe's leadership between the forces represented by Salvini and the more open, self-proclaimed "progressive" spirit of Macron, who last summer denounced the populist "leprosy" rising in Europe, in a barb deliberately aimed at Salvini.

"It's a confrontation between two very different conceptions of Europe," said Lazar — the ultranationalist, populist conception of Salvini, and Macron's constant proselytising for a more unified, transnational Europe.

Macron's palpable disdain for the Italian populists has only multiplied Italian fury at the French government.