Paris: French riot police fired tear gas canisters at "yellow vest" protesters in central Paris on Saturday at the start of a planned demonstration against the high cost of living under President Emmanuel Macron.

A police spokeswoman told reporters there were about 1500 protesters on the Champs-Elysees and authorities said 211 people had been arrested after police found weapons such as hammers, baseball bats and metal petanque balls on them. 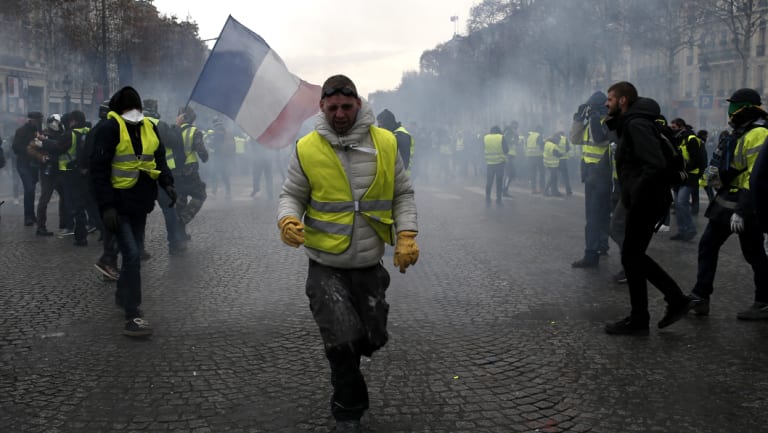 A demonstrator wearing a yellow vest grimaces through tear gas.Credit:AP

Hundreds of protesters were milling around the Arc de Triomphe, which was defaced with graffiti last Saturday, when rioters also torched cars and looted shops.

"We will do all we can so that today can be a day without violence, so that the dialogue that we started this week can continue in the best possible circumstances," Prime Minister Edouard Philippe said on French television.

On Tuesday, Philippe announced the government was suspending planned increases to fuel taxes for at least six months to help defuse weeks of protests, the first U-turn by Macron since he came to power 18 months ago.

About 89,000 police were deployed across France on Saturday, some 8000 of them in Paris.

"We have prepared a robust response," Interior Minister Christophe Castaner told online news site Brut. He called on peaceful protesters not to get mixed up with "hooligans".

"The troublemakers can only be effective when they disguise themselves as yellow vests. Violence is never a good way to get what you want. Now is the time for discussion," he said. 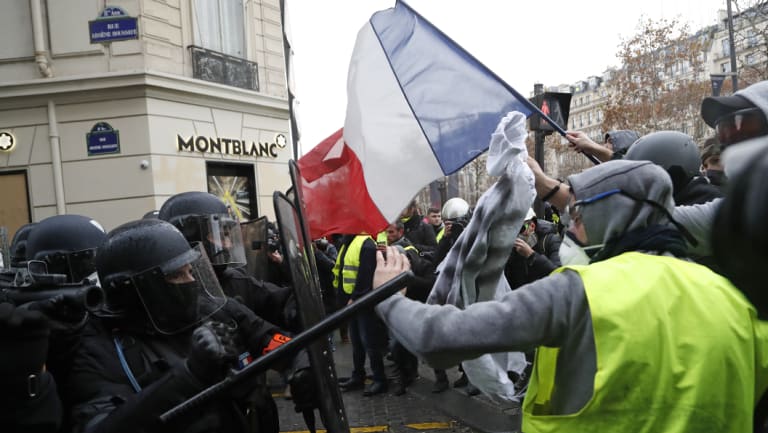 "If you are not aggressive, we will not be aggressive, a masked policeman said as a protester stuck yellow plastic flowers onto policemen.

Much of Paris looked like a ghost town on Saturday, with museums and department stores closed on what should have been a festive pre-Christmas shopping day.

Tourists were few and residents were advised to stay at home if at all possible. Dozens of streets were closed to traffic, while the Eiffel Tower and world-famous museums such as the Musee d'Orsay, the Centre Pompidou and the Louvre were shut.

Many shops were boarded up to avoid looting and street furniture and construction site materials have been removed to prevent them from being used as projectiles.

"We have come here for a peaceful march, not to smash things. We want equality, we want to live, not survive," said Guillaume Le Grac, 28, who works in a slaughterhouse in the town of Guingamp in Brittany.

Protesters, using social media, have billed the weekend as "Act IV" in a dramatic challenge to Macron and his policies.

The protests, named after the high-visibility safety jackets French motorists have to keep in their cars, erupted in November over the squeeze on household budgets caused a proposed increase in fuel taxes.

Demonstrations have since swelled into a broad, sometimes violent rebellion against Macron, a challenge made more difficult to handle since the movement has no formal leader.

Authorities say the protests have been hijacked by far-right and anarchist elements bent on violence and stirring up social unrest in a direct affront to Macron and the security forces.

Despite the government's climbdown over the fuel tax, the 'yellow vests' continue to demand more concessions, including lower taxes, a higher minimum wage, lower energy costs, better retirement benefits and even Macron's resignation.