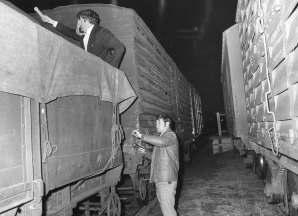 Police early today were searching the Boronia area for the one Bendigo gaol escapee still free.

Earlier, they had recaptured the other five prisoners. Police caught two — John Robbins and Larry Martin — in bush above Bendigo cemetery early yesterday. Then:

Jensen was serving a three-year sentence at Bendigo for receiving, larceny and breaking and entering.

With the seven other escapees he broke out of Bendigo Training Prison shortly before 9 p.m. on Monday. 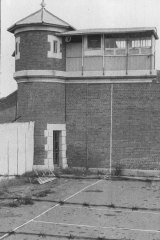 The escapees stabbed two warders and bashed an instructor on the head with an iron pipe during the break.

More than 100 police were combing the Boronia, Bayswater and Vermont area early this morning.

They are looking for a white Valiant sedan, KVZ911.

Police almost caught all four escapees as they left the Lee home. The escapees got away by crashing a stolen car through a fence.

The car was later abandoned.

Reverend Ellis, who took Jahn and Hansford to police headquarters, said last night: “The boys were my friends”.

They told Mr Ellis to meet them on a road in Bayswater.

Then they took him to a nearby house they had broken into on Wednesday night.

He bought them pies and cigarettes on the way to Russell Street.

It is not known whether Jensen has ammunition for the stolen rifle.

But Jensen escaped the blockade.

Police followed leads that Jensen was seen along the Burwood Highway and in the grounds of the Bayswater South State School and the Knox Technical School.

Police are confident that Jensen will be captured very soon.

They say he has no food and cannot last much longer without help.

Detective Sergeant Geoff Anderson yesterday stumbled on Robbins, 20, and Martin, 20, in the bush outside Bendigo, but bypassed them because he as alone.

He returned minutes later with 12 police, armed with rifles, side-arms and shotguns. They surrounded the bewildered men.

Robbins and Martin were led quietly from the scrub, still wearing their stolen dustcoats.

Police had intensified the search in the cemetery district after Mrs Mildred Cowling, 76, of Howson Street, reported bedding stolen from her garage.

Mr A. J. Curtain, SM, remanded them to the same court on July 5.

Bendigo police thought that the other four still free were nearby — until Brown was definitely sighted in a car at Olinda.

A senior policeman said yesterday that the breakout from the training prison had “seriously disrupted” the gaol.

Warders George Bright, 43, Kevin Nolan. 40, and carpentry instructor, Ken Lock, 39, are all in a satisfactory condition in Bendigo Base Hospital following the gaol break.

Peter Jensen was arrested on July 20, 1972, at a King’s Cross nightclub in Sydney, almost a month after breaking out of Bendigo prison.

Killings of Afghans ‘happened all the time’

NSW-Victoria border could reopen within a month