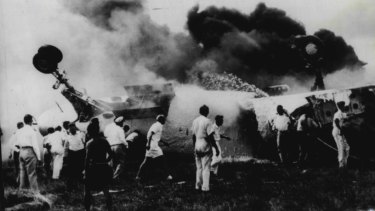 “The burning fuselage of the Qantas BOAC Constellation which burst into flames upon landing at Singapore’s Kallang Airport today.” March 13, 1954Credit:Associated Press Photo

First published in the Sydney Morning Herald on March 14, 1954

A B.O.A.C. Constellation airliner flying from Sydney to London crashed at Singapore this afternoon and burst into flames.

Of 40 people on board, (31 passengers and a crew of nine) only eight are believed to have survived. All were members of the crew.

(Qantas authorities in Sydney this morning released the names of three Sydney victims of the crash.)

The airliner came in to land at Kalang Airport (seven miles from Singapore), but a few seconds after touching it blew up behind a wall of orange flame.

A brisk wind fanned the blaze, and black smoke curled to 1,000 feet.

Horrified eye-witnesses, including friends and relatives of some of those aboard, said they saw
only one of the plane's retractable wheels come down as the Constellation approached.

One said that he heard two explosions as the plane hit the ground. 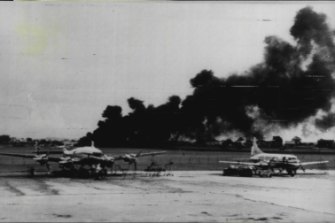 Some eyewitnesses said that the plane approached the field at high speed.

It nosed over and burnt after the front wheels hit the airstrip.

However, another eyewitness said: "The Constellation appeared to do a perfectly normal landing
approach.

"It touched down normally.

"Then a few seconds later there was a huge explosion and a burst of orange flames.

"The aircraft went up on its nose and fell over on its back."

Two hours after the crash the wreckage had cooled down enough for workers to drag 10 charred bodies from the fuselage.

Those who died were trapped in the flaming cabin of the aircraft.

An eye-witness said that the crew members escaped through a crack in the fuselage when the nose broke away.

The airport hotel manager said that he saw two of the crew jump from the cockpit and try to save others of the crew when the airliner burst into flames.

"It was impossible for them to open the doors," he said. 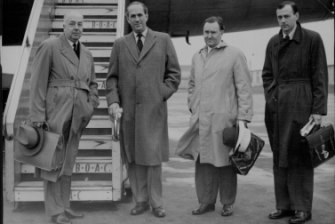 “Sir Miles Thomas, Chairman of the British Overseas Airways Corporation, flew from London Airport in a BOAC constellation this morning March 14 to carry out an on-the-spot investigation of the BOAC constellation crash in which 33 people died at Singapore yesterday.” March 14, 1954.Credit:Associated Press Photo

"Some passengers were trapped inside, although the firefighters tried to cut holes in the side of the lane."

An ambulance rushing some of the survivors to hospital was involved in a collision with a lorry. The patients were transferred to a police radio car.

A B.O.A.C. spokesman said that 24 males, including one member of the crew and eight females, died.

All of the crew were from Britain.

The terminal building at Kalang airport, Singapore, from which horrified spectators saw the Constellation crash and burst into flames.

The Sydney people are:

The Qantas spokesman said that further names would be released when relatives had been informed.

The 1954 BOAC Lockheed Constellation crash remains the deadliest of any aviation accident in Singapore. A public inquiry found that the accident was caused by crew tiredness.