Home » World News » From the frontlines of the Ukraine invasion by Russia, a mad dash to rescue refugees

This story was produced in partnership with the Pulitzer Center.

CHERNIHIV, Ukraine — The sign on the road leading into this war-battered city says "Welcome to Hell" and inside a bombed-out hospital, we begin to see the horror of Russia’s attacks.

A boy injured by bombs lies in a bed, his body broken, no painkillers to ease his suffering, his eyes glassy. A catheter snakes from beneath a brown floral blanket covering the narrow bed, emptying into a glass jar on the floor.

The boy, Bagdan, is 13. His anxious mother paces the room, carrying a secret she hasn’t yet shared with him: The bombs killed his father.

Nearby, another mother wipes away tears as she sits with her bedridden daughter, her legs broken by Russian bombs.

Hand-drawn pictures by other children staying inside this powerless hospital basement decorate the walls. But they can't hide the grim reality of war outside. Bullet holes mark the hospital’s front windows and military vehicles patrol outside.

Chernihiv is about 100 miles north of Ukraine’s capital of Kyiv and just 50 miles south of the Russian border. Fighting here has been intense for weeks, and I have accompanied the non-profit rescue group Team Humanity as it chanced a dash into the city to extract women and children fleeing to safety. These children will have to stay behind because the group isn't set up to evacuate the injured.

Mines and debris litter the streets outside, making travel dangerous. Russian bombs have destroyed much of the city and the smell of destruction fills the air, along with occasional fires. Burned-out and blown-up vehicles line the streets in this city of 285,000, along with a charred tank.

Team Humanity is based in neighboring Moldova’s capital of Chisinau, and has made multiple trips into Ukraine, delivering food and medical supplies along the southern coast, from Odesa to Mykolaiv. Team Humanity’s co-founder, Salam Aldeen, has decided this time to plunge deep into the country, far closer to the frontlines than he’s ever taken his convoy of buses and vans.

Aldeen is a veteran of refugee rescues, from Syria to Afghanistan, and his network of contacts across Ukraine have assured him a quick dash into Chernihiv will be safe enough. 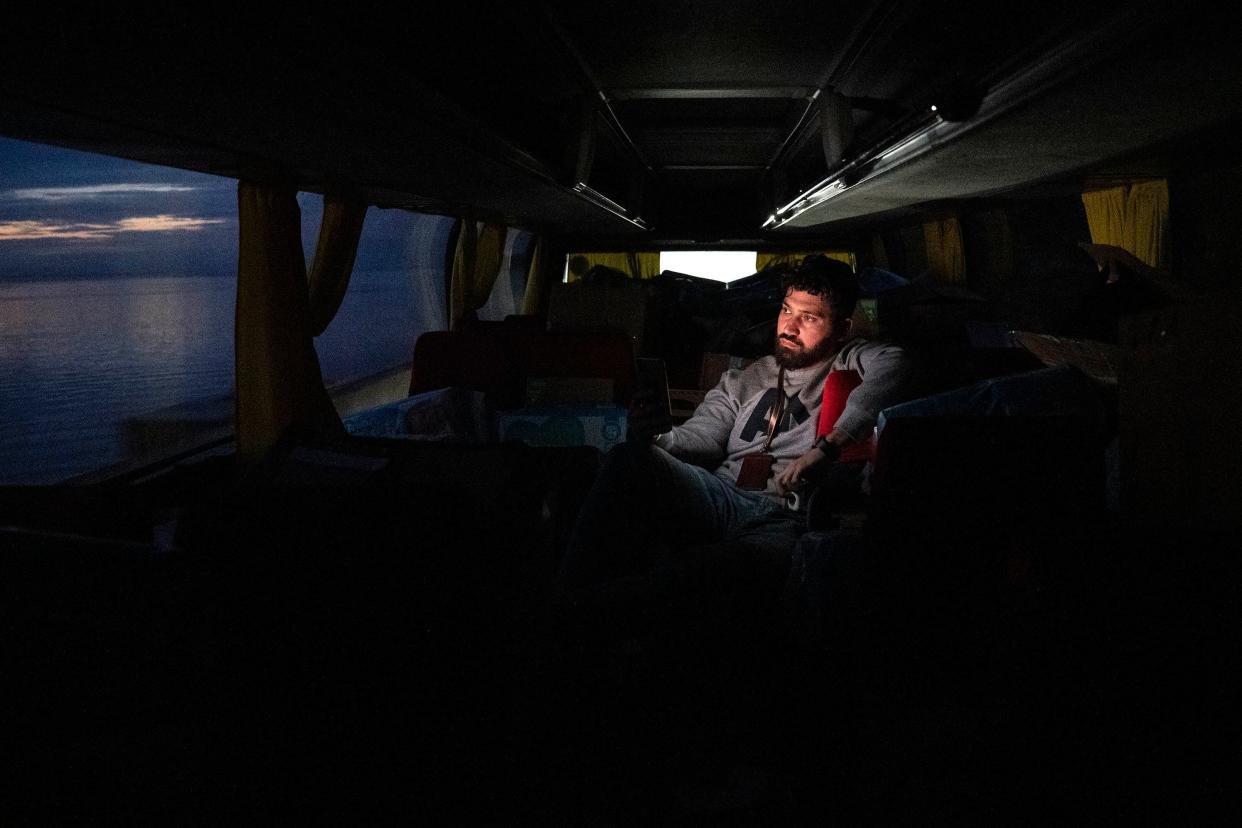 After bedding down the night before in an abandoned hospital outside Kyiv, we wake at 4 a.m. to get the convoy to Chernihiv moving by dawn: two 60-person buses and three Sprinter vans that can each carry about 20 people.

“If you have to go to the bathroom, go,” Aldeen tells a handful of drivers and volunteers as we load up. “We are not stopping again before entering Chernihiv. It’s too dangerous. The Russians are everywhere.”

Since the beginning of the Russian invasion, nearly 5 million people have fled Ukraine, many of them from the eastern areas near Chernihiv or Kyiv. Under martial law, men of fighting age are banned from leaving Ukraine, so the refugees have almost exclusively been women and children. Most have left behind everything they know for an uncertain future and the chance for greater safety in Europe or the United States.

As the sun rises, we drive past largely unattended farms that, under normal times, would be filled with tractors and workers preparing for the spring planting season. Each spring, Ukraine produces wheat and corn and sunflower oil that get shipped across Europe and Africa, sustaining life for millions. But these are not normal times, and the fields are bare.

Yesterday we passed the capital of Kyiv, its six-lane highways empty of traffic. It’s all open road but painstaking going, with frequent military checkpoints. Russian saboteurs are a constant worry for the Ukrainians, and uniformed soldiers board ourbuses regularly, checking our passports and other documents. The checkpoints slow our progress, urgency instilled by the coming sunset and darkness, when curfew sets in each night. 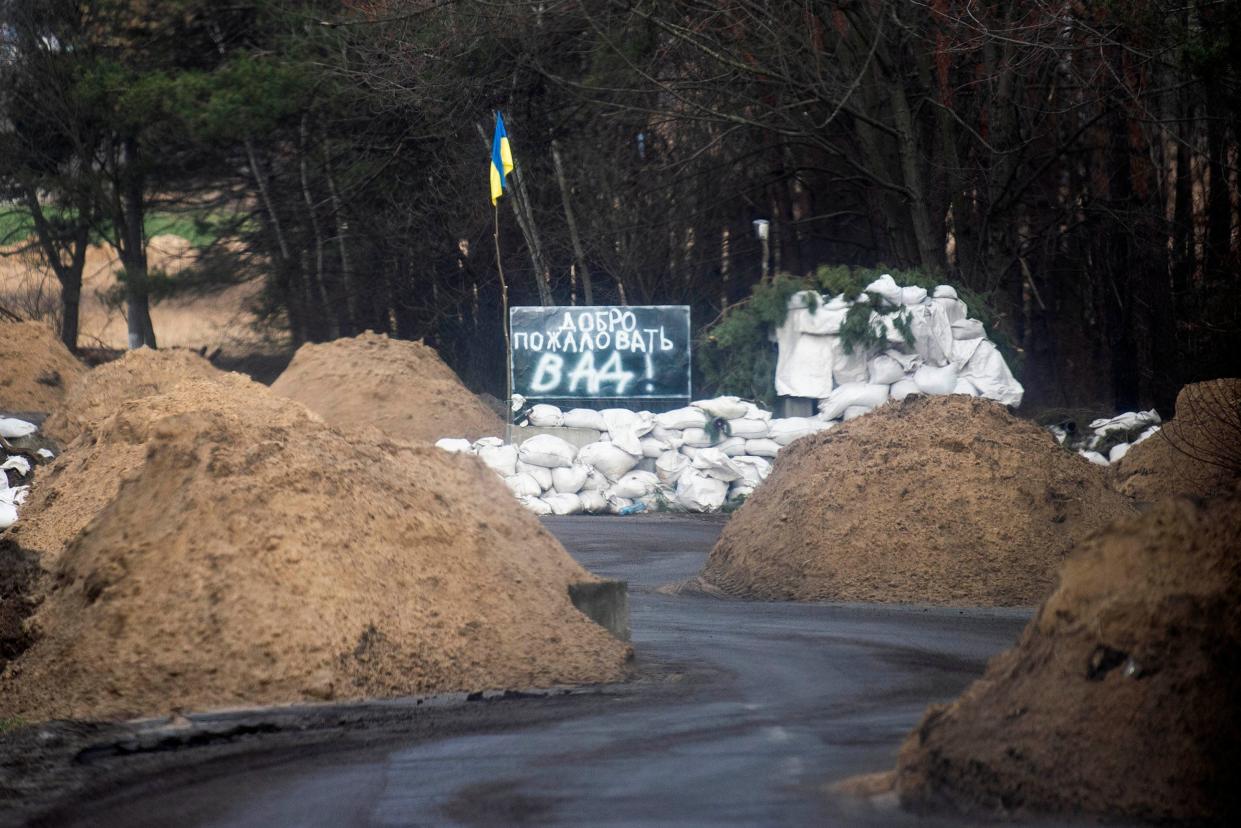 Today, we wind along narrow muddy roads, past tall pines and unattended farmland, and snake through piles of sand set out to slow the approach of Russian invaders on the outskirts of Chernihiv.

Approaching the city, we leave behind the 60-person buses and shift into the smaller supply vans, and one by one, the Sprinters are guided over a makeshift bridge by a Ukrainian soldier. Right now, the city’s main arteries are closed, and soldiers guide aid vehicles in and passenger cars out.

Entering the city proper, I see bombed-out buildings lining the street, and elderly people riding bikes past unmanned checkpoints. It very much feels like a scene from Europe during WWII, right down to the trenches dug into the landscape.

Mines dot the roads, their smooth metal casings about the size of dinner plates. Locals tell me the Russians left them behind as they retreated days ago, and no one has removedthem. Instead, pedestrians and bike riders wind past the mines and craters left by explosions, past trees sheared off 20 feet above the ground, and flipped and charred cars littering the roadsides.

Arriving at the hospital to collect refugees, Aldeen begins to fret: Only three women and three children are prepared to leave. He has seats for 160 refugees, and he’s frustrated he didn’t arrive sooner. He blames himself – it’s been a Herculean effort to get the buses to Chernihiv and took longer than he hoped.

It’s a hard pill to swallow, but this is war and so a new plan is born – instead of heading straight for the safety of Moldova, we’ll divert to Mykolaiv, a city from which Team Humanity has already extracted hundreds of refugees. 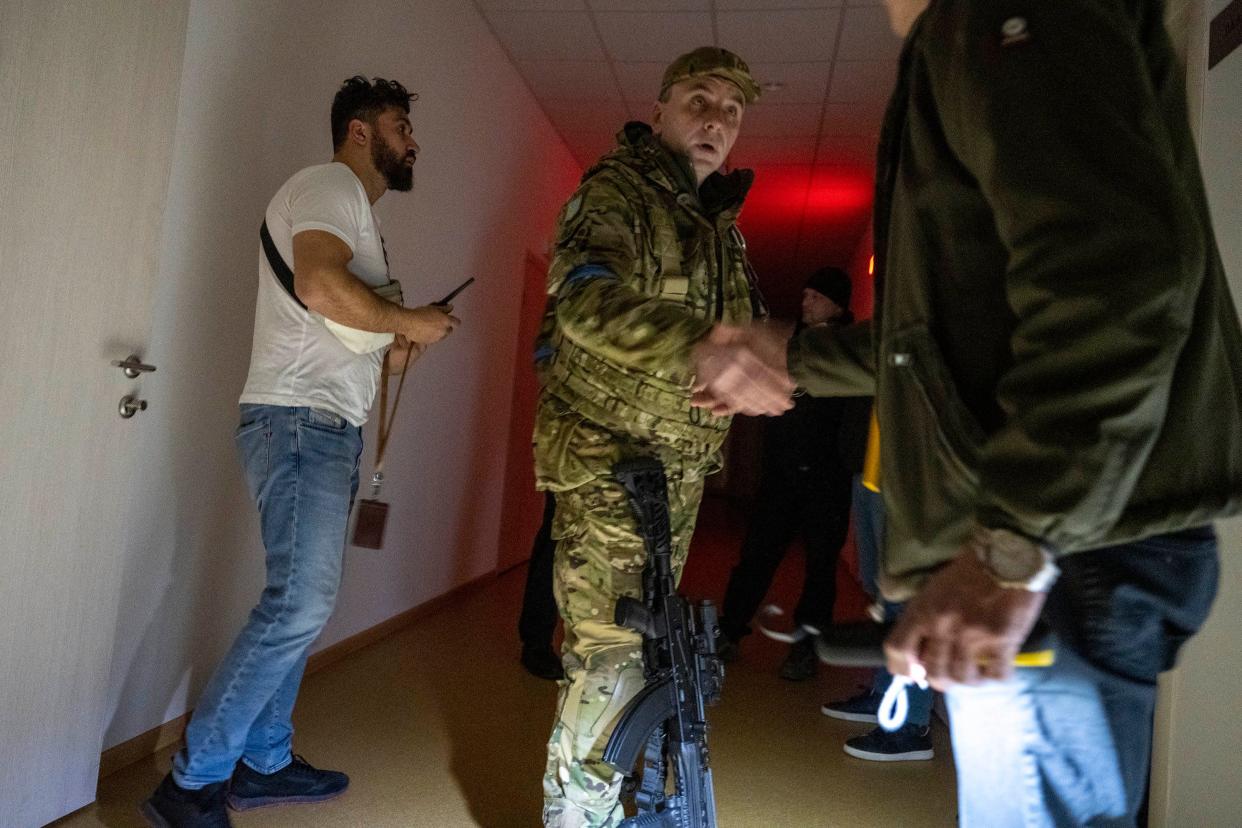 We’re running late and darkness is coming. Calling in a police escort, Aldee shepherds the vans back out of the city, collects the buses and hurries the convoy back to the safehouse at the abandoned hospital outside Kyiv. Team Humanity asked that USA TODAY not reveal its specific location over fears it would be targeted by Russians.

As we get going, Team Humanity volunteer Andreas Bauchy asks me if I heard the Russian artillery shelling last night – he recognizes the sound from his time in the Danish military, serving in Afghanistan’s Helmand Province. Like some of the other men, I slept on a mattress in the hospital hallway, and the six refugees slept in the few rooms available. Unlike him, I slept through it.

After another early morning departure, we roll past Odesa and approach Mykolaiv. I visited this area a week earlier and recent Russian attacks are apparent. There’s a larger Ukrainian military presence, more checkpoints and more scrutiny of each passenger. 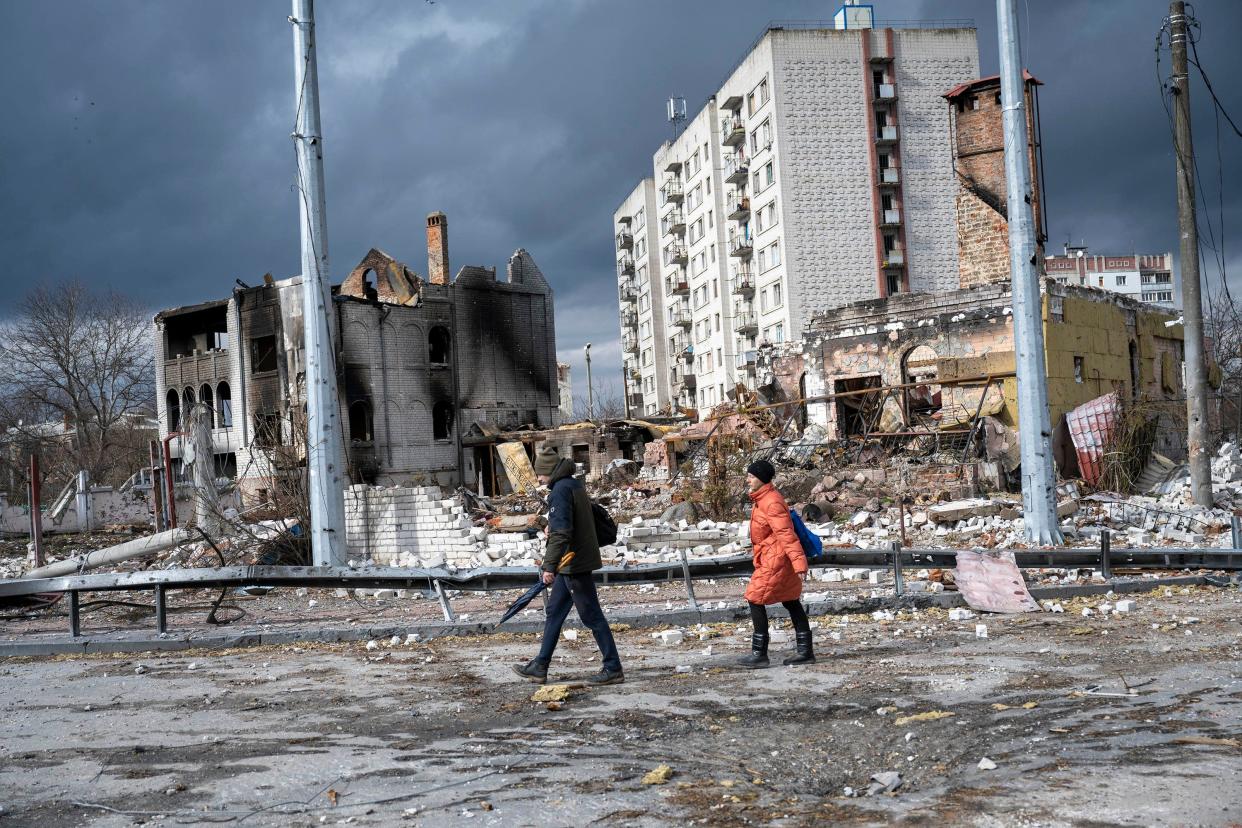 My press credentials are checked frequently and at one checkpoint a soldier orders me to show what photos I’ve taken on my cellphone. Ukrainian authorities have permitted journalists to cover the war, but they strictly limit the publication of any images deemed tactically sensitive. A few days earlier, Ukrainian military authorities deported a Dutch journalist from this area after he posted a video on Twitter of a Russian strike on an oil refinery.

The soldier doesn’t check my cameras, but he orders me to delete the maps I’ve been using to track our journey – maps I’ve been sending to my editors so they can monitor my safety from 5,000 miles away.

Rolling deeper into Mykolaiv, we arrive at the evacuee pickup location. The pick-up spot is in a parking lot outside a department store near the center of town, packed with cars and about 300 people, their bags stacked and waiting for Team Humanity’s buses. A week ago, the team extracted about 70 people. But today, even with the big buses, there are more people than seats, and the sense of urgency is higher, the danger more real. 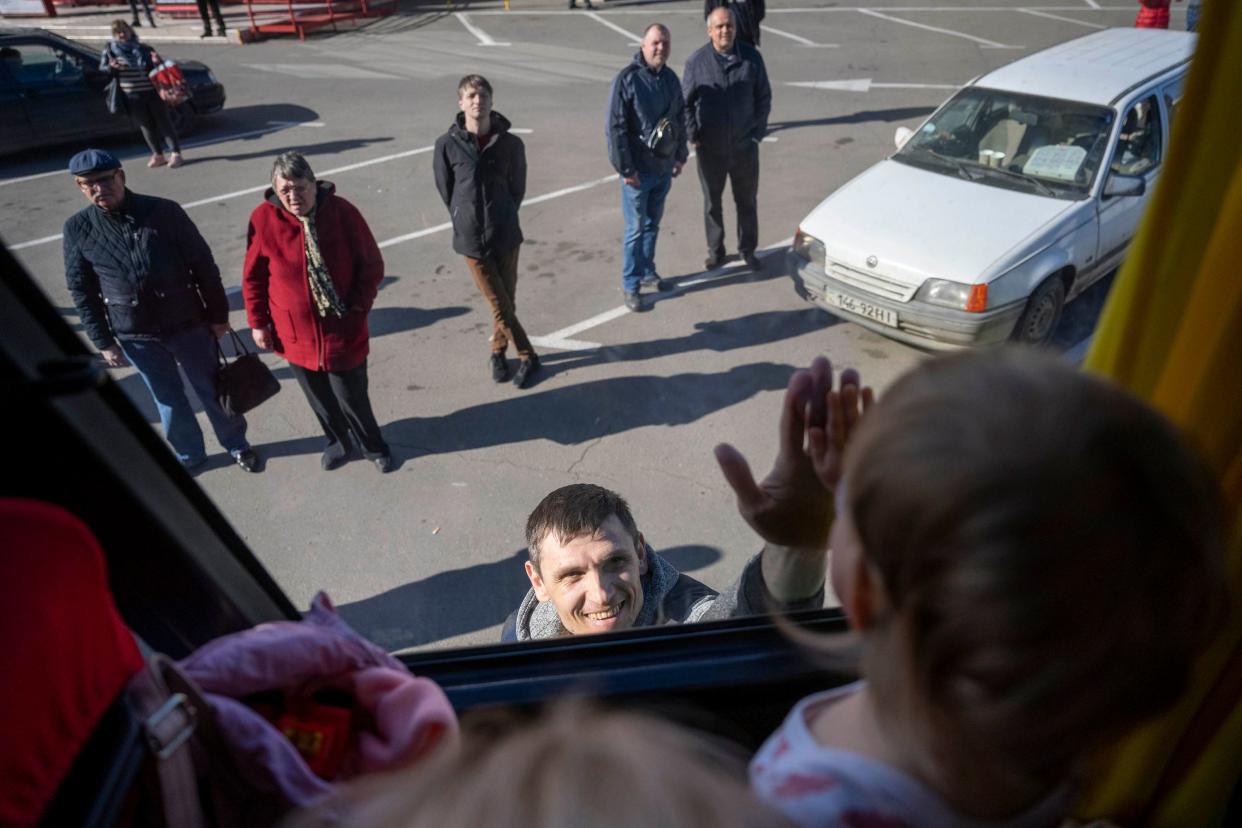 Crying women and children say goodbye to husbands, boyfriends, fathers, brothers, friends and elderly parents, possibly for the last time, to board a bus and drive west, destination unknown. As the buses pull away, a man salutes his daughter and his grandson.

Now headed west toward the safety of Moldova, we pass more military checkpoints, including near the oil refinery bombed by the Russians a few days earlier.

For weeks, Ukrainians believed Russia would invade from the ocean, and soldiers mined the beaches and deployed dozens of tanks, armored vehicles and other weapons along the Black Sea coastline. Worried Odessans watched as Russian warships menaced the coast, occasionally shelling the cities and key infrastructure. 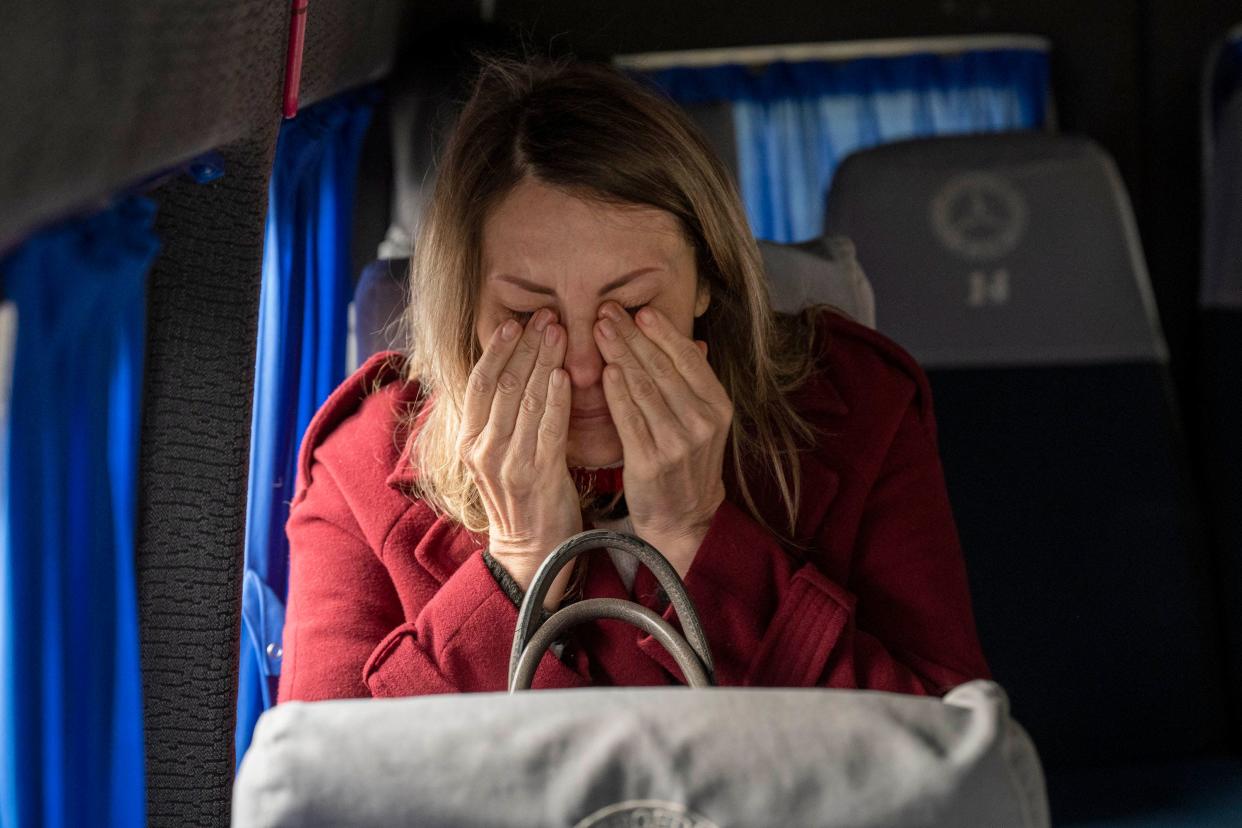 From Mykolaiv to Odesa is about 80 miles, but the difference between the two cities is night and day. While Mykolaiv feels like a war zone, Odesa has largely escaped the fighting and destruction. Although the intersections and streets are filled with soldiers and artillery stations, people still go about their business as usual. Street markets are open, cafes too. Traffic fills the streets, although backups occur at the checkpoints.

From Odesa, the checkpoints dwindle as we drive west toward Moldova and the safety of Europe. The drive from Mykolaiv to our destination of Chisinau, Moldova, should have taken us about 4.5 hours. Instead, it takes us 12 with no bathroom breaks or stops to stretch legs.

Finally, our convoy reaches the Ukraine-Moldova border and the promise of safety. But not everyone makes it across. 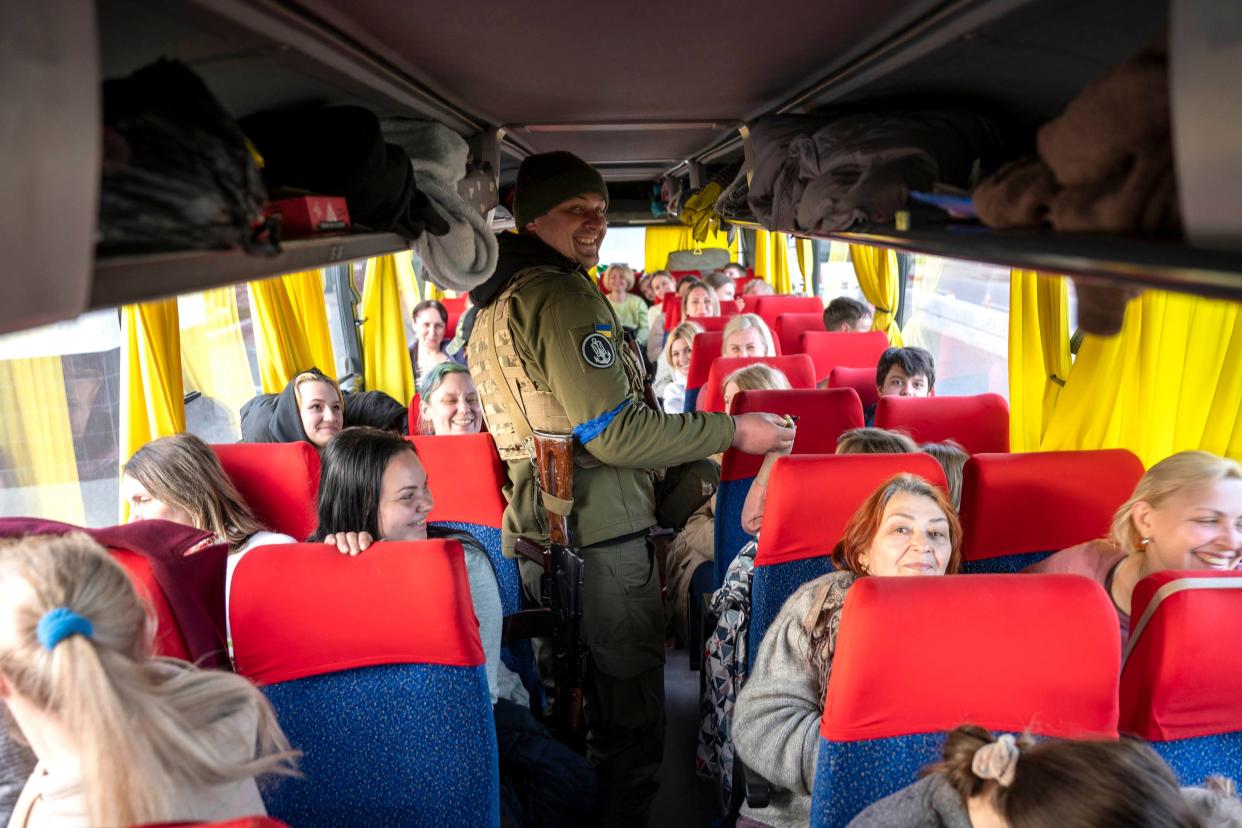 To leave Ukraine, border guards inspect everyone’s passports and documents. And one young man, who appears to be 16, is actually 20. He’s traveling with his elderly grandmother, helping her board the bus and cope with the long, exhausting drive.

Border guards remove both the young man and his grandmother, and they negotiate for several hours. The elderly woman begins having a panic attack as the guards question her and her grandson and a medic hands her a pill to reduce her anxiety, to calm her rapid heartbeat and high blood pressure.

The grandmother boards back alone, her grandson in custody. He’ll be sent back to Mykolaiv, back east toward the Russians.

His grandmother heads west toward an uncertain future.

YouTube urged to take down videos 'doctored' by Russia

Dad, 42, pulls out front teeth with PLIERS after downing eight pints of Stella