Germany has today banned the neo-Nazi group Combat 18 Deutschland and carried out a series of raids on the offshoot of the British far-right organisation.

Police hit six addresses across the country in what a top security official said was a ‘clear message’ against far-right extremism and anti-Semitism.

The group is an offshoot of Combat 18, which was founded in Britain in the early 1990s as a militant wing of the British National Party. 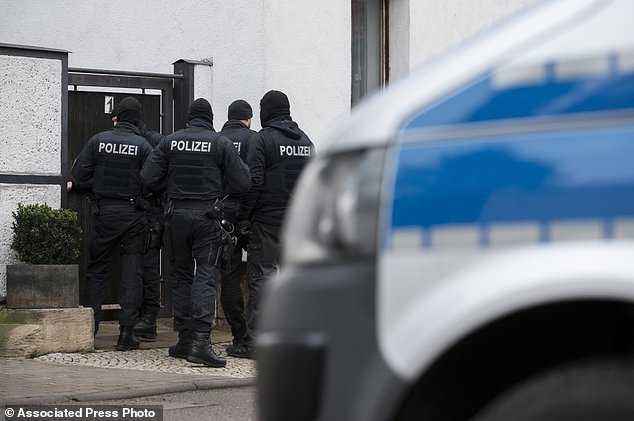 Police officers standing in front of an apartment building in Erfurt, Germany, today.Combat 18 Deutschland was banned in Germany and police seized a haul of evidence 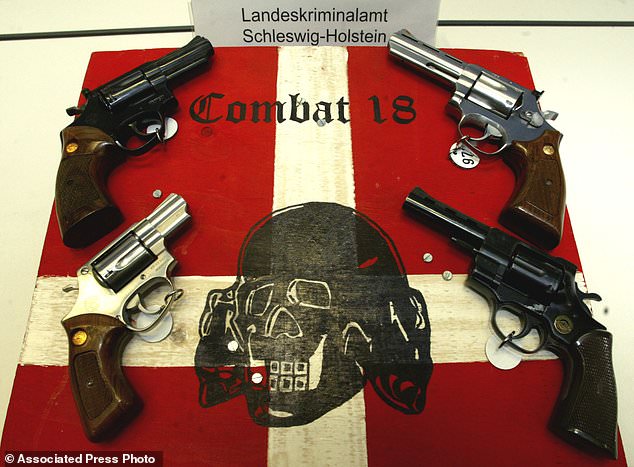 Models of seized weapons are on display during a press conference by the state police in Kiel, northern Germany in a file photo from 2003

The number 18 stands for the first and eighth letters of the alphabet, AH, which are the initials of Nazi leader Adolf Hitler.

The German chapter of Combat 18 ‘enjoys great respect within the far-right extremist scene’ and is regarded as a symbol of violent extremism, Seehofer said.

Some of the group’s members were convicted of illegally importing ammunition to Germany as they returned from firearms training in the Czech Republic in September 2017.

Suspected members of a Combat 18 section were stopped by special unit GSG 9 on their return trip from shooting training in the Czech Republic at the German border.

The federal police found ammunition from them, the case ended up in court, and several men were later convicted. 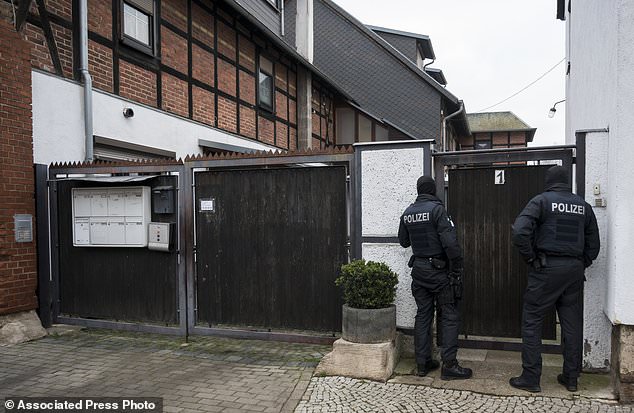 Police officers standing in front of an apartment building in Erfurt, Germany, today. Six raids were carried out across the country 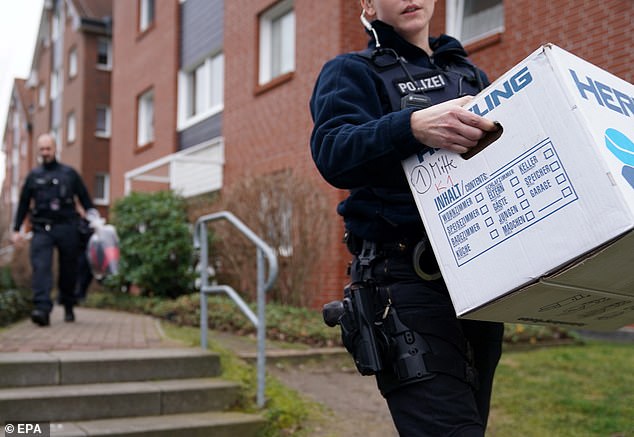 Irene Mihalic, a member of the opposition Green party, said the neo-Nazi group should have been banned sooner.

She called for links between Combat 18 and other actors in the far-right scene to be investigated, including the suspect in the killing of regional politician Walter Luebcke last year.

Mihalic added: ‘At last we take into account the dangerousness of Combat 18 and put an end to years of trivialisation.’

Combat 18 is considered the armed wing of the Blood and Honour neo-Nazi network, which is banned in Germany.

Seehofer said: ‘Today’s ban is a clear message: Right-wing extremism and anti-Semitism have no place in our society.

‘With the ban on these associations, the Basic Law gives us a sharp sword in order to effectively protect our free democratic basic order and our values system.’

Climate change should be a ‘natural’ issue for conservative MPs: Cameron