Runaway giant tortoise that stopped trains was looking for love when he went onto railway line, owner reveals

An African spurred tortoise who broke free from his enclosure and caused chaos on train lines ‘was sex-starved and looking for love at the time’, a wildlife centre manager revealed today.

The giant tortoise was looking for love when he survived being hit by a 90mph train on Monday morning after breaking out of his enclosure.

The sex-starved tortoise called Clyde was left with only a ‘superficial’ injury to the top of its shell after the train went over the top of him as he walked down the tracks.

The lucky escape happened after the randy 140lbs creature knocked down the concrete block wall of his pen in what appeared to be a desperate search for female company.

Dillon Prest, manager of Swallow Aquatics, said: ‘I think he smashed his way out to freedom because he wanted to find a girl tortoise.

‘I guess he just wanted some female company, and he thought that Norwich was the right place to find some.’

Clyde crawled through a meadow and slipped through a fence beside the railway line next to his home at the Swallow Aquatics wildlife centre in East Harling, Norfolk.

He then set off between the two rails of the track and headed towards the bright lights of Norwich around 20 miles away, seemingly oblivious to the danger.

But his hunt for a lady tortoise ended in disaster when a train clipped the top of his shell as it went over him more than a day after he escaped from his pen. 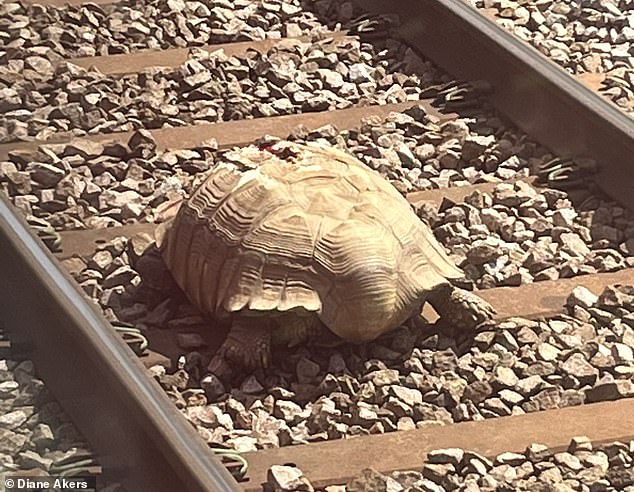 Another shocked train driver stopped when he spotted 2ft 6ins long Clyde on the line in front of him and called Network Rail bosses.

Three trains were held up for around 50 minutes until staff from the Swallow Aquatics centre were alerted and carried him back to his home.

Clyde who is believed to be aged in his twenties is now being treated for his injury at a specialist vets, but is expected to make a full recovery.

Mr Prest said: ‘He is an incredibly tough creature and he seemed remarkably unfazed after being hit by a train.

‘Giant tortoises can move quite quickly and he landed up about half a mile from home.

‘He was still walking along the track when we found him, despite being hit by the train.

‘Luckily he is not too badly hurt. He is being given antibiotics and is resting at the vets, and we hope to see him again soon.

‘He has a four or five inch wide area skimmed off the top of his shell, but there is no damage to his organs. It is superficial damage and his three quarter inch thick shell should grow back in time.

‘I don’t know if this experience is going to be enough to dampen his ardour. He only wants to do what comes naturally, even though he has probably never met a female tortoise.’

Dillon, 50, said Clyde had lived at the centre for several years after being taken in as a rescue pet from a Norfolk family who could no longer look after him.

But he was moved four weeks ago into a temporary pen, made from concrete blocks, to allow renovation work on his normal enclosure.

Dillon added: ‘He got out by knocking down the blocks some time between 5.30pm on Saturday and 10am on Sunday.

‘We think he went into a meadow habitat with long grass which we have got at the back of the centre.

‘I spent a couple of hours looking for him on the Sunday, but I couldn’t find him anywhere. I expected to find him sunbathing in the meadow on Monday.

‘He must have been attracted to the railway track as it is a nice open area to sunbathe – but he obviously didn’t realise that a hulking train would come along.

‘We got a call from Network Rail on Monday morning asking if we had lost a tortoise after he was seen on the track.

‘There was a local member of staff who knew we kept tortoises, so that’s why they called us.

‘I went down to meet him beside the track and I saw him walking along the line about 100 yards away.

‘I was expecting him to be smashed to pieces when I heard a train had gone over him – but there is only a little bit of damage to his shell.’

He added: ‘We will now have to think about making his enclosure a little stronger so he can’t get out.’ 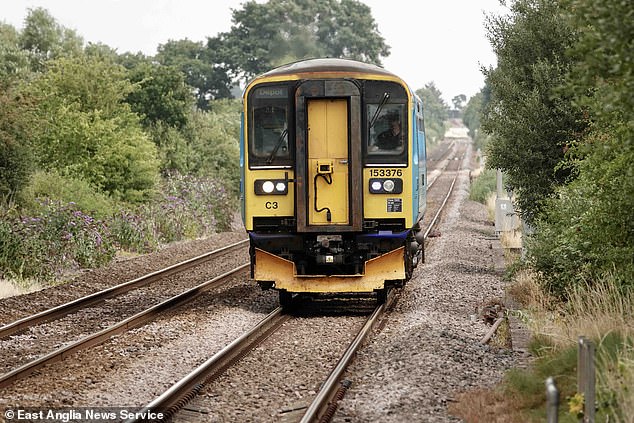 A spokesperson for train company Greater Anglia said two of its trains were held up including the Norwich to Stansted service carrying 125 passengers.

She added: ‘It’s definitely the first time we have heard of a tortoise on the line. We are sorry for the disruption caused to customers.

‘Someone from Network Rail did try and move the tortoise, but he was too heavy so they had to get help’.

An East Midlands Railways train was also held up while Clyde was lifted to safety.

Train passenger Lydia Jane White, tweeted: ‘Train delayed because of a giant tortoise, too heavy to lift, stuck on the train tracks after having escaped from a local wildlife centre’ is not something I thought I’d ever hear from a train driver!’

Another passenger Diane Akers tweeted: ‘I couldn’t believe my eyes to be honest!’

Members of the far-right, including a Proud Boys leader, were reportedly stabbed during an altercation in Washington, DC