“It’s going to get really, really hot,” he said, “and that is our new weather challenge.” 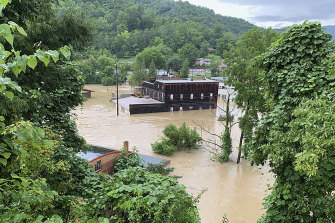 A building in Whitesburg, Kentucky after flooding. Credit:AP

Local temperatures are forecast to rise to around 27 degrees to 32 degrees starting on Wednesday and continuing through the end of the week, according to the National Weather Service.

But the combination of the heat and humidity could make it feel even hotter — up to or above 37 degrees. Some areas could also experience isolated thunderstorms this week.

The governor encouraged people to seek relief from the sun at various cooling centres set up across the flood-impacted region.

“I know you may be out there working to salvage whatever you can, but be really careful starting Wednesday and Thursday when it gets hot,” said Beshear. 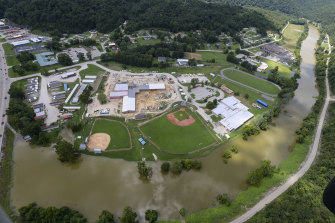 The river is still high around the homes in Breathitt County, Kentucky. Credit:AP

“We’re bringing in water by the truckloads. We’re going to make sure we have enough for you but you’re going to need a cool place to at least take a break, if not spend part of these days.”

Groups disproportionately at risk from extreme heat include babies and young kids; people over 65; people who are pregnant, work or exercise outdoors, or have certain chronic medical conditions; and people who live in low-quality housing or are unhoused.

But anyone can get sick from the heat if they aren’t careful, and the best way to stay safe is to drink a lot of water, wear light clothes and stay indoors as much as possible, according to the Centres for Disease Control and Prevention.

Signs of heat exhaustion include heavy sweating, muscle cramps, nausea or vomiting and dizziness, among others.

Disaster recovery can already take a long time in the US.

Back-to-back events only complicate it further.

In Eastern Kentucky, the flood damage is estimated to take years to repair. The heavy rainfall started last Thursday night, triggering record flooding that inundated roads and wiped homes right off their foundations.

As of Tuesday morning, 37 people were confirmed dead, according to Beshear, and more people remain missing.

At least 191 people are being temporarily housed at state parks, and travel trailers are being brought in to help with immediate housing needs. The governor’s office is encouraging people to donate to the newly created Team Eastern Kentucky Flood Relief Fund to help those affected.

“It is absolutely devastating. It’s going to take years to rebuild. People were left with absolutely nothing. Homes, we don’t know where they are. Just entirely gone,” Beshear said. “And we continue to find bodies of our brothers and sisters that we have lost.”

Now Prince Andrew 'will chaperone Queen to the Derby' for jubilee

Is Sadiq Khan's OWN council about to U-turn on his £33m green scheme?