The boss of Goldman Sachs has slammed working from home as an ‘aberration’ and said it is not the ‘new normal’.

David Solomon, 59, also insisted the firm would be looking to ‘correct’ the remote working situation ‘as soon as possible’.

The CEO’s fiery words come after the lockdown easing roadmap revealed remote working could remain in place until the summer.

Boris Johnson said that people should continue to work from home until the review on social distancing measures.

This means the advice could remain in place until June 21.

However, Mr Solomon has now suggested the measure does not suit his investment bank, despite some suggestions that firms may seek to retain a form of remote working even after lockdown. 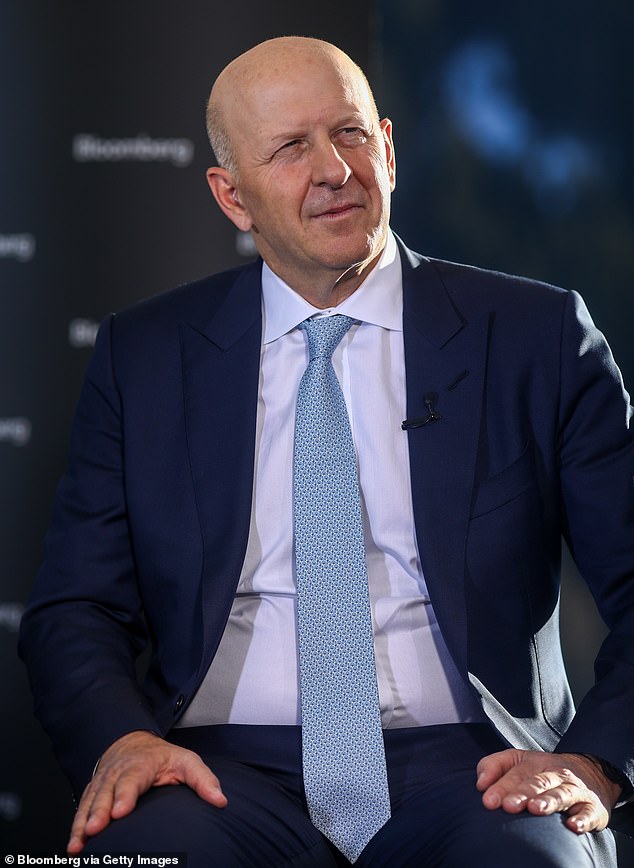 David Solomon, 59, believes that working from home does not suit the investment bank 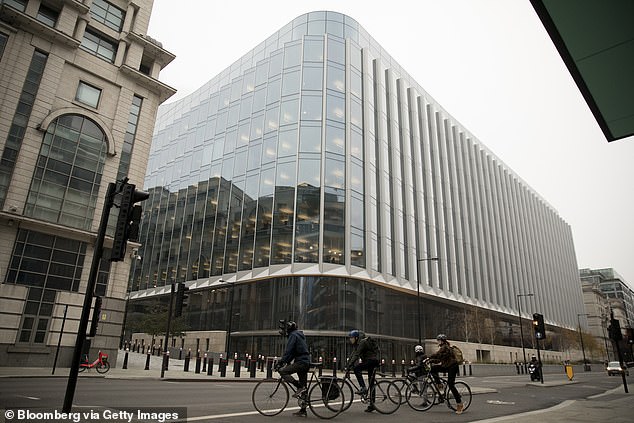 Cyclists pass the head offices of Goldman Sachs in London. Mr Solomon said only 10% staff were in the office in 2020

He revealed that Goldman Sachs operated throughout 2020 with ‘less than 10% of our people’ in the office.

He added: ‘I do think for a business like ours, which is an innovative, collaborative apprenticeship culture, this is not ideal for us. And it’s not a new normal. It’s an aberration that we’re going to correct as soon as possible,’ he told a conference on Wednesday.

Mr Solomon said he was particularly worried about the incoming class of 3,000 new recruits who he fears won’t get the ‘direct mentorship’ they need.

‘I am very focused on the fact that I don’t want another class of young people arriving at Goldman Sachs in the summer remotely.

‘I don’t think as we get out of the pandemic the overall operating mode of the way a business like ours operates will be vastly different.’

His comments echo other members of the financial sector.

In September, JP Morgan’s chief executive Jamie Dimon said that working from home has had a negative effect on productivity while Barclays boss Jes Staley recently said he hoped the vaccine would allow employees to return to the office.

Announcing the roadmap earlier this month, Mr Johnson said the city centre would ‘bounce back’.

Mr Johnson’s roadmap document reveals that that the social distancing review is expected to be completed ‘ahead of step 4’, which will start no earlier than June 21.

It raises the prospect of economic problems for city centres across the UK to continue for many months to come – while shops, pubs and restaurants will be allowed to open they may not have any customers. 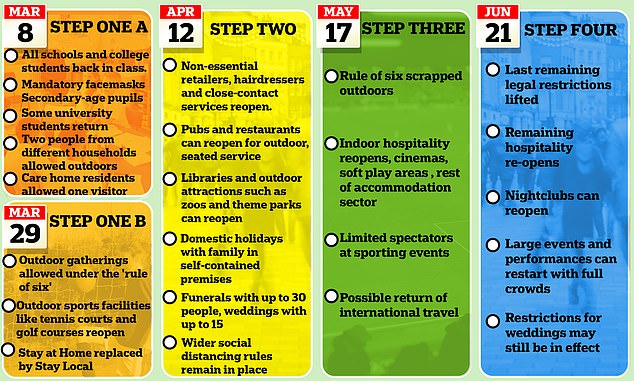 The road map to recovery: The PM’s plan sees working from home to remain in place until June

But pressed on the issue at a Downing Street press conference the PM said: ‘There will be changes as a result of the pandemic and it will accelerate some trends and it may be that … there are opportunities for more residential accommodation in town centres, in high streets which are changing the way they work anyway for a long time.

‘But I don’t believe that this is going to mean a fundamental change to the way our life in our big cities really works.’

The roadmap document itself goes into more detail.

‘Social distancing is difficult and damaging for businesses and, as a result, it is important to return to as near to normal as quickly as possible,’ it says.

‘Ahead of Step 4, as more is understood about the impact of vaccines on transmission and a far greater proportion of the population has been vaccinated, the Government will complete a review of social distancing measures and other long-term measures that have been put in place to limit transmission.

‘The results of the review will help inform decisions on the timing and circumstances under which rules on 1m+, face masks and other measures may be lifted.

‘The review will also inform guidance on working from home – people should continue to work from home where they can until this review is complete.’

Candace Owens on feud with Cardi B: ‘I love every second’