A grieving brother has spent £12,000 ($15,000) turning his basement into the ultimate cat jungle for his brother’s pets.

Hilton Patton, 28, from Edmonton, Alberta, in Canada, spent all his money and maxed out his credit cards to give Bengal’s Benji and Nala the purr-fect play area.

It took him more than four months of hanging drywall, putting up shelving, carpeting the walls and installing lights to create the impressive playground.

Hilton built the feline fun-house while grieving the loss of his brother Boston, who tragically lost his life to suicide last year at the age of 24 after battling with PTSD. 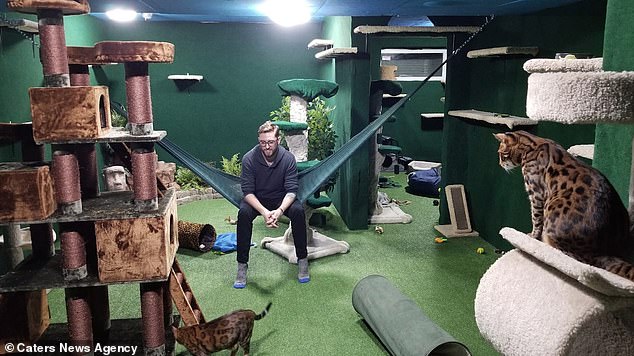 Hilton Patton, 28, pictured, created an impressive cat jungle in his basement in Edmonton, Canada, for his brother’s pets Benji and Nala after his younger sibling Boston, 24, died last year

Although he had little DIY knowledge, the cats now have everything from walls they can climb, high ledges to race around, scratch posts, snoozing spots and toys.

Hilton, a software engineer, said: ‘I just knew I wanted to do something for Boston and something he would have loved.

‘I wanted to make a jungle thing as Bengal cats are kind of from the jungle and it all went from there.

‘Benji likes to climb, which I could tell as Boston’s place had lots of holes in the walls, so I put carpet up on the walls so they could do that until their hearts were content.

‘I cried when I was finished, it didn’t feel like I thought it would, I felt a level of satisfaction thinking how perfect it was.

‘The cats love it so much, it’s really cool since letting them down there. I can hear them jumping on the shelves, they climb the walls like crazy. 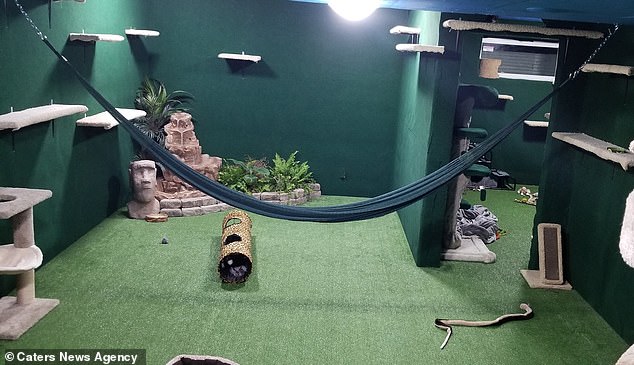 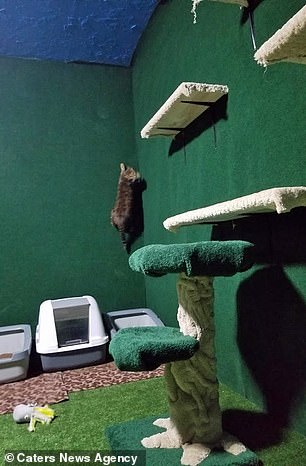 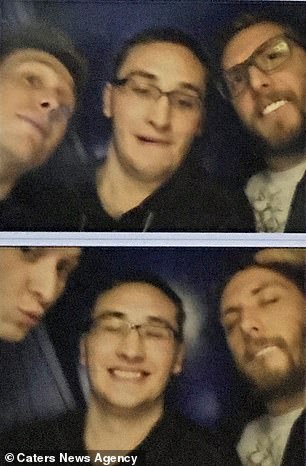 One of the cats uses its claws to climb up the carpeted walls, left, and the brothers are pictured together, right. Hilton previously promised never to split up Boston’s two cats 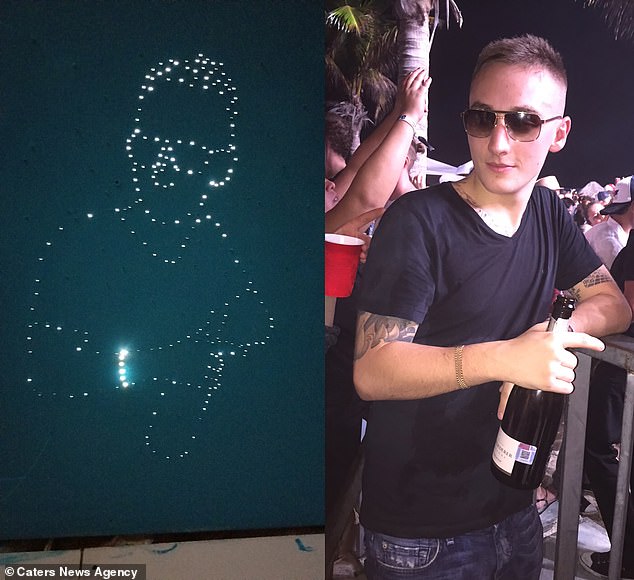 Hilton installed LED lights, left, in the shape of Boston, pictured, on the ceiling of the basement

‘I try to spend as much time as I can there, it feels as close as I can be to Boston.

‘I wanted the cats to feel that he had a presence there still and that he can look down on them, it would be nice to think he is in the stars looking down on us.’

After Boston died Hilton took in his brother’s cats, having previously made a vow never to split them up, and set to work on something special in his memory.

To ensure animal lover Boston featured in the designs, he installed LED lights on the ceiling that create an outline of his brother from one of his favourite pictures.

Hilton set about the task months after his brother passed away in February last year, while still trying to come to terms with the loss.

But knowing he had to take care of his brother’s cats provided a distraction and positive way to channel his energy and emotion.

Hilton said: ‘After Boston passed, I didn’t want to do anything at all I was in constant pain, but I knew I had to get the cats down there and let them see the place.

‘It felt like I was doing something for him, I was just thinking about him all the time.’

Hilton did all the work himself apart from having professionals sort out the framing, laying the turf and the electrics. 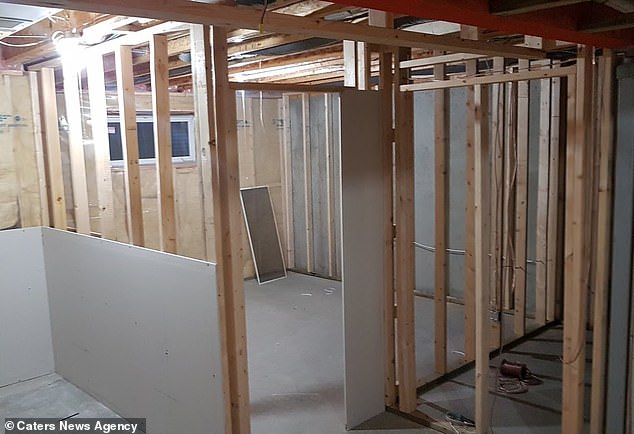 Hilton spent four months renovating the basement into the play area and had professionals sort out the framing, lay the turf and the electrics 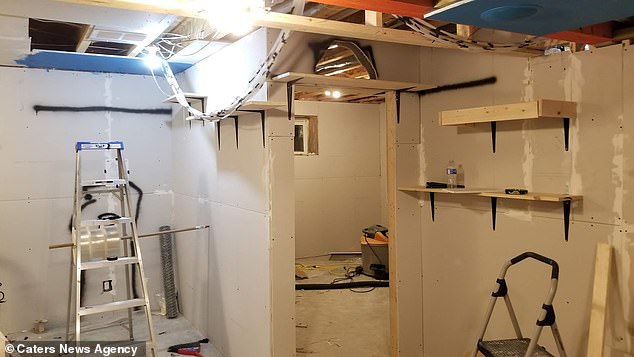 The software engineer spent £12,000 creating the space, pictured during renovations, but said it was all worth it to do something for his little brother 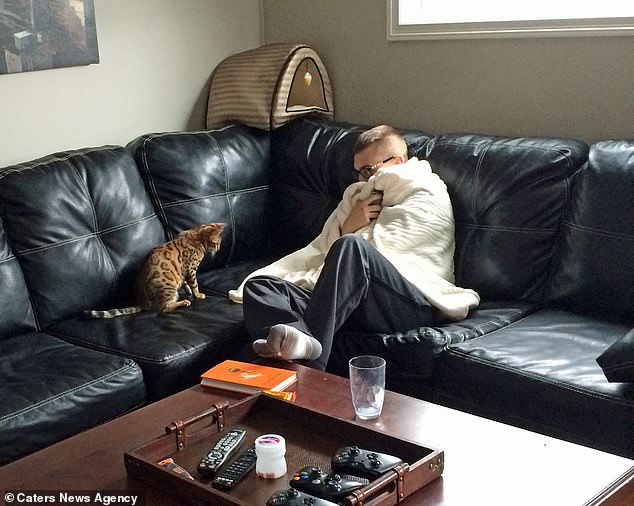 Boston, pictured with one of his cats, was a huge animal lover. Hilton wanted to care for his pets for him and said looking after them was ‘a distraction’ after Boston’s death

While he believes it was an ‘amateur attempt’, friends and the online world are amazed by his work.

Hilton said: ‘I worked hours and hours, blood sweat and tears down there, I hope Boston would like it and wish I could do more, but thankfully it’s all over.

‘I hope I did right by Boston, now I go down there to hang out with them, play with them and sometimes I read a book in the hammock, it’s good being down there.

‘I maxed out all my cards, spent all my money, I spent everything I could but I don’t regret it at all.

‘When you are in that much pain you don’t care about money, your job or anything, this was something for my little brother and I still stand by that.’

Reflecting on his brother’s battle with depression, Hilton urges anyone with suicidal thoughts to seek help from professionals, family and friends.

Additionally, he set up a fundraising page so that anyone can donate to buy cat toys for Boston’s beloved Bengal cats.

Hilton said: ‘If I could talk to Boston again, I would tell him I love him, that I miss him and would give him a hug. I would do anything for 30 more seconds with him.

‘I’d like for him to know that I’m doing the best for his cats and that I tell them he loves them every day.’