Anna Collyer is remarkably cool for a woman in a hot seat.

It’s not the restaurant we are in. We are tucked away comfortably in a windowed niche at Azuma, one of the most reliable of Sydney’s Japanese restaurants, which is, in turn, tucked away in the corner of the podium of Chifley Square, a solid shiny tower once named for Alan Bond that today reeks quietly of Australian legal and corporate power. 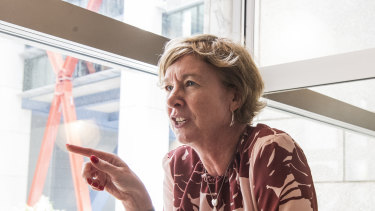 Collyer is in town for meetings from Melbourne, which has always been home. In a prior life she spent many hours in this building here as a partner at the law giant now known as Allens, where she headed a department focused on preparing legal services for a digitally disrupted future.

“I used to travel up from Melbourne for one of my first big deals,” she explains, discussing the sale of one of the nation’s first large windfarms, giving her earlier experience in a career in energy that would eventually lead to her advising on the privatisation of Victorian, South Australian and NSW power assets.

“It was great. It was this really exciting early development of the renewables industry.”

Today she is the chair of both the Australian Energy Market Commission (AEMC) and the Energy Security Board (ESB). These are organisations that you probably don’t know much about even if you have heard of them, but that have a significant impact on all of our lives.

There she sits at the very centre of the alphabet soup of agencies that regulate Australia’s power system.

The AEMC’s role is to set the rules for the National Energy Market. The NEM in turn is the grid that provides power to Queensland, NSW, the ACT, Victoria, South Australia and Tasmania. It is the world’s longest geographically connected power system in the world. The AEMC sets the rules that makes sure that the generators and retailers are providing enough power at a reasonable price to the NEM.

The immediate consequences were dire. It wasn’t just lights that went out. A zinc smelter cooled and its contents solidified. A major hospital was forced to transfer patients from its intensive care ward after its backup generators failed. A fertility clinic lost several embryos.

One of the longer-term consequences was an almighty political bunfight.

Before the various causes of the blackout were even beginning to be untangled, hobby horses were being saddled up and ridden into battle.

The incident prompted, in part, what became known as the “Finkel review” into the national energy market, and how federal and state governments might plan to ensure that the supply of power was kept reliable, affordable and stable as renewable energy surged into the system and the nation’s ageing network of coal-fired power stations close.

The ESB was then set up by the nation’s energy ministers to co-ordinate the recommendations of the Finkel review.

Collyer took over as chair in November. The two roles place her at the centre of one of the most contentious of Australia’s nexuses of policy, the crossroads between the ongoing debate of energy and climate, a field that became known as the graveyard of prime ministers.

She has built a reputation of calm diplomacy in her management of the competing interests of generators, retailers, consumer bodies and state and federal ministers.

As she orders lunch – platters of sushi and tempura and a tuna salad – I discover, sadly, that she is discreet as well as diplomatic. She answers questions generously, as long as they are focused on energy policy and market efficiency. The secrets of her delicate constituency are safe.

Collyer’s kitchen cabinet includes a close family and a husband that manages a busy household while she focuses on keeping the nation’s lights on. She also takes advice from the former ESB head, Kerry Schott, a regulator who earned a reputation for not being too shy to bang powerful political heads together when necessary.

Collyer, says Schott, is in the thick of a debate over how the grid should be upgraded to cope with the flood of new renewable energy, and how – and which – new energy storage technologies should be introduced to make that intermittent green power “firm”.

“I think Anna manages that well. I think she’s very calm and measured and gives everybody a fair go. I mean she would have a view but would not put that ahead of anybody else in trying to reach an agreement. She is a good moderator.”

Outside Sydney’s summer is ending and the weather is warmish and wet. It feels like it has been raining for months and people have been complaining on talkback radio about mould growing in closets and bugs invading kitchens.

We’ve made a dent in the sushi and sashimi when the salad of seared tuna and shredded spring onions appears. We take turns in breaking delicious chunks of the flesh off with our chopsticks until I point out a pair of fruit flies mucking about enthusiastically in the soy vinaigrette. 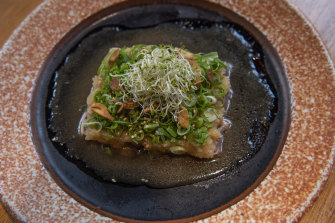 Lunch at Azuma ws platters of sushi and tempura and a tuna salad.Credit:Louise Kennerley

Collyer sets the dish aside and the conversation kicks on. We flick back to Collyer’s comfortable childhood in Box Hill.

Collyer’s mother was an accountant for a large firm unti 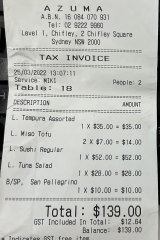 l she was poached to become a partner in newly established suburban practice.

“That was quite unusual in the 1970s to have a mum that went to the office to work. I used to call her receptionist from the payphone if I needed something from school. And so I always presumed I would go to work and it would be no big deal.”

For a time Collyer toyed with doing physiotherapy before opting for law and commerce.

“I never really wanted to become a lawyer, I just thought it would be a way to have an interesting life,” she says.

By the time she graduated from Melbourne University in the early 1990s it was alongside a handful of other women, though as she built her career she noticed their numbers dwindle. In part she attributes this to the role women play in building families during critical stages of their working lives, but she also sees unconscious bias at work.

“We tend to appreciate qualities we see in ourselves when we look at others. That’s what we think of as good. So if you’ve got an institution, like a law firm, where you’ve got mostly male partners, it’s just natural, that they mostly find it easier to work with male lawyers and to promote them, because they see themselves.”

In her experience then, the more diverse the team, the better the results.

There is a typical view that leaders are charismatic and come into meetings equipped with answers, says Collyer.

“But there is a different sort of leadership that is probably more suited to my personality. I am here to empower others. I’d like to learn from all the different kinds of expertise that we have available. I don’t always have the answer.”

Davina McCall reveals her heartbreak over Sarah Harding's death — and tells her: 'It's not your fault'