Nightclub fire horror leaves 13 dead: Revellers covered in flames flee Thai bar while many more – including tourists – are trapped inside, with dozens injured

At least 13 people have been killed after a devastating fire tore through a packed nightclub in Thailand.

More than 40 others have been injured – 14 of whom were seriously hurt – in the blaze at the bar around 90 miles southeast of Bangkok in the early hours of the morning.

Horrifying video footage shows revellers fleeing the building as flames and smoke pour out of it at around 1am on Friday morning.

Screams can be heard in the background, while some people coming out of the building were covered in flames.

Police have said a number of the victims of the tragedy were found crowded by the entrance and in the bathroom, with fears they had been trapped in the inferno. 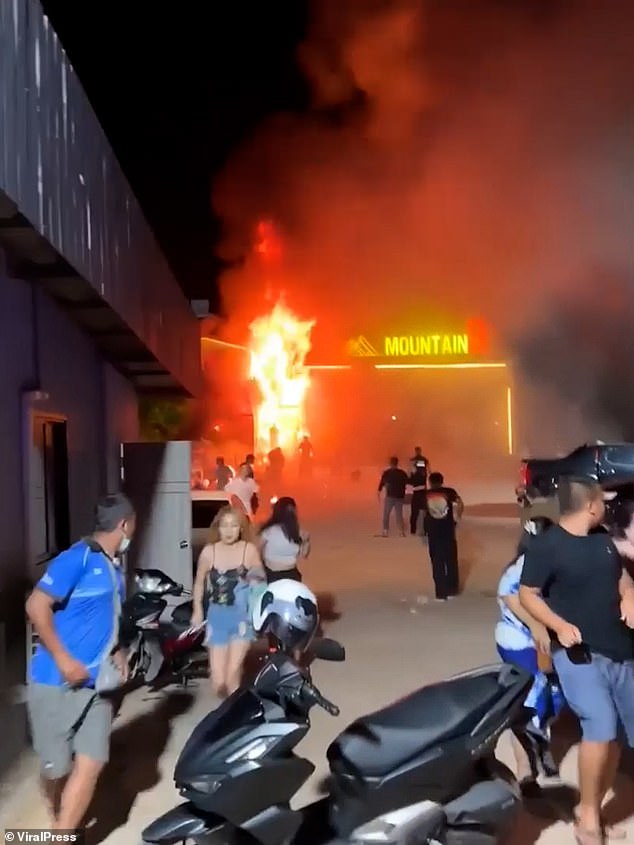 Video shows people desperately trying to flee the building as flames and smoke pour out of the Mountain B bar in Sattahip, Thailand 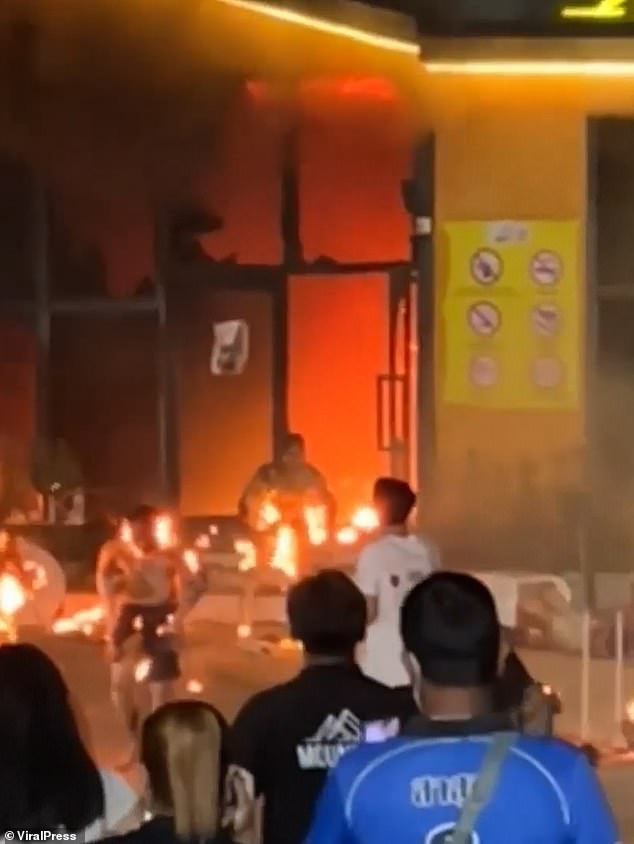 Some people were seen running out of the building while on fire. The blaze started at around 1am this morning

The incident took place at the Mountain B nightspot in Chonburi province’s Sattahip district, around 25 miles from the popular tourist town of Pattaya.

The Sawang Rojanathammasathan Rescue Foundation said the flames were accelerated by foam that had been sprayed on the walls to soundproof the club and it had taken firefighters more than three hours to contain the blaze.

Witnesses report the fire spread quickly, engulfing the building within a minute.

Thailand’s Prime Minister Prayut Chan-O-Cha has ordered an investigation into the fire and offered his condolences to the families of the victims.

It is believed the blaze happened while a band was performing in the club, with the flames spreading quickly inside the building, with two explosions being heard.

Police Major General Atthasit Kitchahan, commander of the Chonburi Provincial Police, said the owner of the club told him there fire had begun on the roof before rapidly spreading downwards. 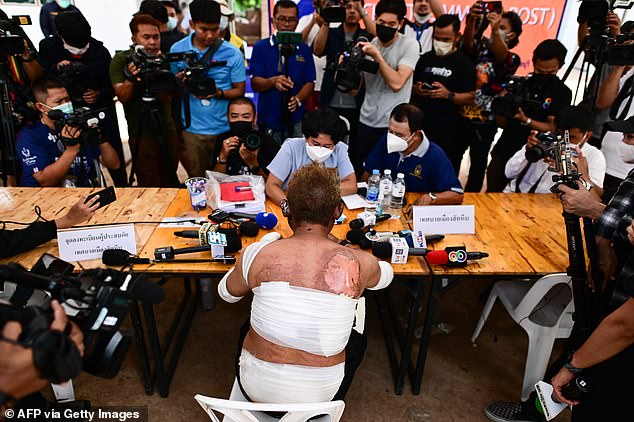 Chalit Chotisupakarn, a survivor of the fire, speaks to the authorities outside the venue this morning 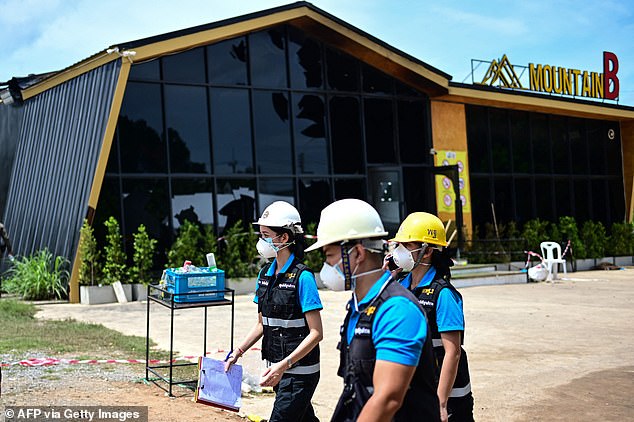 Thailand’s Prime Minister has ordered an investigation into the blaze, which happened while a band played to revellers in the bar

The dead – four women and nine men – were found mostly crowded by the entrance and in the bathroom, their bodies severely burned, the rescue service said.

They were aged between 17 and 49 and all are believed to have been Thai.

‘There is not death related to foreigners,’ police lieutenant colonel Boonsong Yingyong of the Phlu Ta Luang police station, which oversees the area where the blaze occurred, told AFP by phone.

One of the victims was the singer of the band playing at the club, his mother told local media.

‘I don’t know what to say. The death came all of a sudden,’ Premjai Sae-Oung told reporters.

She said a musician friend who managed to escape had told her the fire broke out in front of the band and spread rapidly.

Several witnesses described seeing smoke and fire on the ceiling near the venue’s stage followed by the sound of explosions.

‘The fire started at the top right corner of the stage,’ a witness identified only as Nana told PPTV.

‘The singer must have seen it too, so he shouted ‘fire’ and threw away the microphone.’

‘I am quite shocked. But I am lucky that when I saw the fire, I could get myself together and get out of there,’ she said, adding that she saw several pub security guards with their clothing on fire.

A waitress at the venue, Thanyapat Sornsuwanhiran, also told Thai television reporters that she saw smoke near the stage. 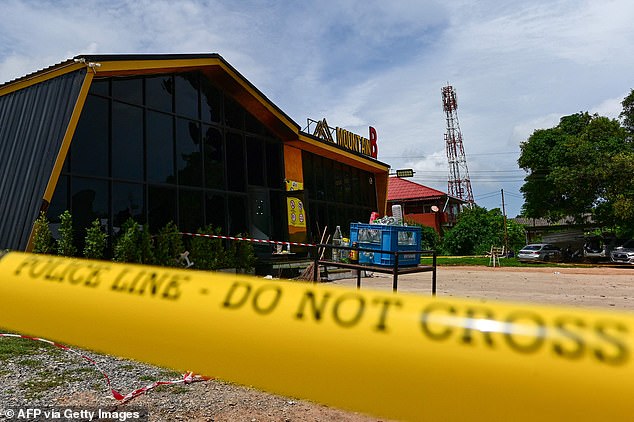 ‘I shouted ‘fire’ to customers, and I was near the doors, so I directed them out. I kept shouting ‘fire, fire’ and the security guards were also helping lead people out,’ she said.

Images of the aftermath showed how the fire had turned the inside of the club into a blackened wreck, with the charred metal frames of furniture scattered among ashes.

Engineers are inspecting the one-storey building amid fears it could collapse.

Interior minister Anupong Paochinda told reporters it appeared the Mountain B was operating ‘without permission’ to run as an entertainment venue.

Police Colonel Boonsong Yingyong, the deputy investigator at the region’s Phlu Ta Luang Police Station, said: ‘An emergency call was received shortly before 1am informing us there had been a fire at a pub and several people were killed and injured. 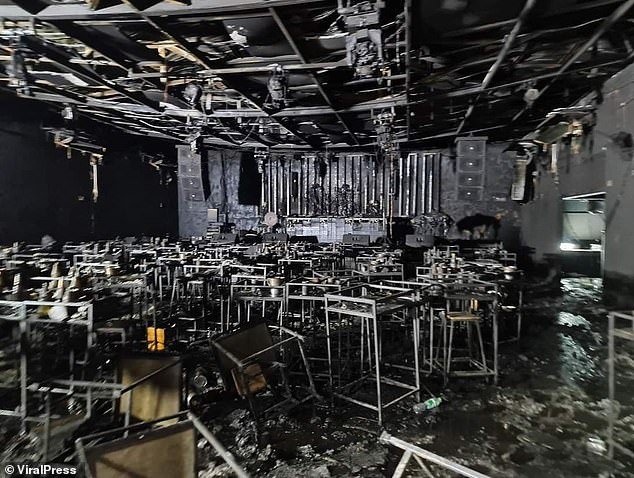 The fire tore through the building quickly, with some victims trapped by the intense flames. a total of 13 bodies have been found so far

‘There were people who were burned running out of the building. The fire was difficult to control because inside the building there were highly flammable objects, especially sound-absorbing foam solutions.’

The official cause of the fire has not yet been determined, with local TV reporting the pub’s owner and staff were giving statements at the police station and the police forensic team would be collecting evidence at the scene.

Concerns have long been raised about Thailand’s lax approach to health and safety regulations, particularly in its countless bars and nightclubs.

A massive inferno erupted at a New Year’s Eve party at Bangkok’s swanky Santika club in 2009, killing 67 people and injuring more than 200.

The Santika owner was jailed for three years over the blaze, which began when fireworks were let off as a rock band called Burn played on stage.

More recently, four people were killed in a fire caused by an electrical fault at a club on the holiday island of Phuket, a magnet for foreign tourists, in 2012.

Babysitter charged in death of boy, 5, after home surveillance showed her 'kicking him in head because he wet his pants'