Victoria’s Chief Health Officer Brett Sutton actively authorised an email on the day in March that the state's hotel quarantine was set up telling the federal government that private security guards were going to be used to guard returning travellers.

The emails obtained by The Age contradict Professor Sutton's written and verbal testimony to the hotel quarantine inquiry, in which he said he had not been aware of the use of private security until late May, after the devastating COVID-19 outbreak had occurred. 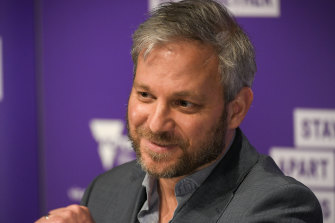 The series of emails was not tendered to the Board of Inquiry by the Department of Health and Human Services, even though they were required to provide all relevant materials. The inquiry announced on Friday it would hold an extraordinary sitting on October 20, though it's not known what the sitting is for or who will be asked to appear.

Several departmental sources have this week claimed to The Age that a deliberate decision was made by DHHS and its legal advisers not to give certain emails to the inquiry.

"There was much debate but a decision was made that the department could get away with claiming they weren't relevant," said one source, who cannot be identified. Under Victoria’s Inquiries Act, it is an offence to hinder, obstruct or mislead an inquiry.

The timing is important because, as the most visible health official in the Andrews government, Professor Sutton might have been able to use his authority to raise questions about the use of private security guards, as he later did, on the basis that a casual and ill-trained workforce was not equipped to work in the hazardous environment of hotel quarantine.

A spokesman for the health department said in response to questions that a thorough and rapid search for documents had been conducted when the inquiry was set up. In mid-July, the inquiry had clarified that only documents deemed the "most relevant" and of "greatest assistance" should be provided, amounting to about 600 documents. The department had now provided 4000 documents and this week was asked for a further two by the inquiry, the spokesman said.

"DHHS remains committed to working collaboratively with the board, and providing its full, frank and timely co-operation with any requests."

The missing email chain shows Professor Sutton directing another health department official to answer a series of questions posed by the federal Department of Home Affairs about Victoria's hotel quarantine arrangements, and then acknowledging the response from his department.

Government sources with knowledge of the situation have confirmed that the Department of Health and Human Services provided the inquiry with further emails on Friday after receiving a notice to produce. The notice came after The Age had alerted the inquiry to the existence of fresh emails.

Just hours after the National Cabinet decided on March 27 to place all international arrivals into 14-days mandatory hotel quarantine, Professor Sutton received an email from Sandra Jeffrey, the assistant secretary in Home Affairs for border measures.

Ms Jeffrey asked Professor Sutton to provide an overview of Victoria’s hotel quarantine arrangements and key contacts. Professor Sutton asked departmental colleagues to prepare a response and to copy him into the email sent back to Ms Jeffrey.

In answer to question four from Ms Jeffrey about security arrangements, the DHHS response stated: “Directions will be provided to passengers as the (sic) disembark and will be supported by Victoria Police at the airport. Private security is being contracted to provide security at the hotels with escalation arrangements to VicPol as needed.” Professor Sutton was copied on this email.

The email chain shows Professor Sutton thanking a colleague for his work after Home Affairs was advised of Victoria’s arrangements, including the use of private security.

In his witness statement and in testimony on September 16, Professor Sutton repeatedly said he did not know private security was being used in hotels until after a COVID-19 outbreak in guards and hotel staff at Rydges in late May.

“I have not been involved in giving directions, instructions or guidance to private security contractors. As explained, prior to the outbreaks I was not aware that security guards were being used,” the Chief Health Officer said in his written statement.

He admitted that, with the benefit of hindsight, that relying upon private security was a health risk because of the vulnerabilities and demographics of the workforce.

The material that was initially withheld from the inquiry also includes an April 1 email outlining a command structure for overseeing detained people that put the Chief Health Officer in charge, supported by other members of the public health team.

“It is important that all direction, policy, reporting and arrangements do not break this chain,” the email said. “This strict view is vital to safeguard the wellbeing and duty of care owed by the State to these people and legal and other risks to the department and its staff, who are administering the detention regime on behalf of the Deputy Chief Health Officer and Chief Health Officer.”

However, in reality, the public health team was sidelined from the operational side of the quarantine program, according to evidence before the inquiry.

Premier Daniel Andrews said on Friday that Professor Sutton’s absence from the daily COVID-19 media conference had nothing to do with the doubts over his evidence to the inquiry. Mr Andrews said he did not know anything about the matter.

“I know not much more than those [this morning’s] reports … that’s not a great surprise because this is a matter between the Chief Health Officer, the Department and the board [of inquiry].”

Asked if he was confident Professor Sutton’s evidence to the inquiry was true and correct, Mr Andrews said: “I have no reason not to be but those matters will be followed up by the board.”

State Opposition Leader Michael O’Brien said Professor Sutton should be recalled by the inquiry to explain the contradiction in his evidence. Shadow attorney-general Ed O'Donohue wrote to the head of the inquiry, Judge Jennifer Coate, on Friday to urge her to seek a time extension from the Governor-in-Council in order to recall several witnesses, including Professor Sutton, for further examination.

Late Friday, Professor Sutton issued a statement saying the evidence he gave to the Board of Inquiry was honest and to the best of his knowledge at the time.

"If I am asked to appear before the Board again, I will of course cooperate fully and be frank and honest, as I always have been."

Professor Sutton said the Board of Inquiry recently asked the Department for additional documents, and the documents have been provided.

Mr Andrews on Friday also announced Jeremi Moule as the new Department of Premier & Cabinet secretary. Mr Moule has been the department’s deputy secretary for governance policy and co-ordination since 2018. He replaces Chris Eccles who resigned on Monday after contradictions emerged in his testimony to Ms Coate's inquiry.