Today's hotel inquiry hearing is under way. You can watch it live, below:

Professor Sutton has been asked about an email from a Victorian public health official warning there was a considerable risk to the health and safety of people detained in hotel quarantine.

The email, the inquiry heard, was from Public Health Commander Dr Finn Romanes and was sent on April 9, within two weeks of the quarantine program starting. 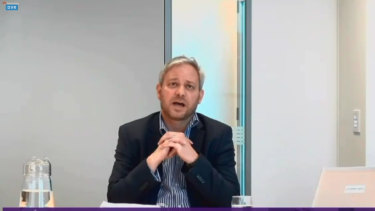 Dr Romanes, a former deputy chief health officer, wrote there was "a lack of a unified plan for this program" and the people running the program were not "satisfied there is a policy and set processes to manage the healthcare and welfare of detainees, for whom this program is accountable."

"There are now considerable complexity and considerable risk that unless governance and plans issues are addressed there will be a risk to the health and safety of detainees," Dr Romanes said.

The email was addressed to state controller Andrea Spiteri and the deputy state controller. Professor Sutton and his deputy Annaliese van Diemen were copied into the email along with Health Department commanders Pam Williams and Merrin Bamert, and department deputy secretary Jacinda de Witts.

Dr Romanes requested an urgent governance review of the program and the program needed a clear leader and direct line of accountability to the deputy chief health officer.

Professor Sutton said Dr Romanes talked to him about his views before he sent the email.

"I did support this as being called out as something that required urgent review," he told the inquiry.
"Absolutely, Dr Romanes was acting on behalf of me in highlighting concerns that he had."

Andrea Spiteri was chosen as the state controller – the lead Victoria's overall health response – instead of Brett Sutton.

Professor Sutton has told the inquiry that while Ms Spiteri was "an excellent leader" in emergency management within the Health Department he did not agree with the decision. 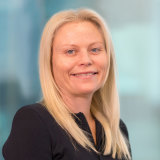 Professor Sutton said it was preferable in a pandemic that someone with public health expertise and experience with communicable diseases was state controller.

He said his views was now different, with the secretary of the Health Department Kym Peake now the state controller.

"Ms Peake is an appropriate state controller at this juncture," he said.

Professor Sutton said he would have preferred being in charge of the state's COVID-19 response when the pandemic began in Victoria.

Under the state emergency plan, the Chief Health Officer is technically supposed to be the state controller – the person who has oversight of the overall pandemic response. 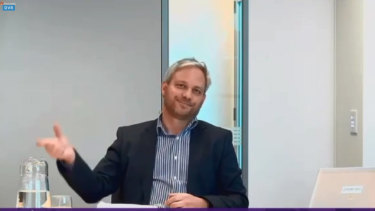 Instead, Health Department deputy secretary Melissa Skilbeck recommended the job go to someone else because Mr Sutton would be too busy as the key public health advisor and face of the pandemic.

Professor Sutton confirmed in the inquiry that he didn't agree with this decision.

"The position [of state controller] has line of sight of operational elements that I as chief health officer and accountable with all the powers that I'm exercising under the Public Health and Wellbeing Act that it's important for me to have line of sight of the application of those controls and to be appropriately aware, to have situational awareness of those operational activities," Professor Sutton said.

Victorian Premier Daniel Andrews is standing by his comments to a Public Accounts and Estimates Committee last month that it was, "fundamentally incorrect to assert that there was hundreds of ADF staff on offer [with hotel quarantine] and somehow someone said no".

Yesterday, the independent inquiry into the failures of Victoria's hotel quarantine program which seeded Victoria's second wave of infections was provided emails that suggest the offer was made on April 8.

The federal government documents provided to the inquiry on Tuesday included an email with the subject heading "assistance re hotel stay security". 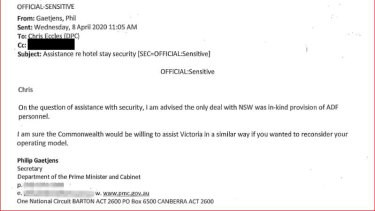 The email was sent by the boss of the Commonwealth public service, Phil Gaetjens, to Chris Eccles, his Victorian public service equivalent.

Mr Gaetjens wrote: "The Commonwealth would be willing to assist Victoria in a similar way [to NSW] if you wanted to reconsider your model" and use the ADF. Mr Eccles replied: "Thanks Phil."

Mr Andrews today said all his statements on the issue had been accurate, and refused to comment further pointing to the fact he is appearing before the inquiry next week.

"That's entirely a matter that relates to a whole lot of detail both within the email and beyond that it's not appropriate for me to get into [now]," he said to a reporter.

"I've answered your question. It's exactly the same answer I gave yesterday because it's accurate, it's truthful and others can seek to play games with this. I'm focused on getting this job done and the statements I've made are accurate."

Professor Sutton has been firm in his view that hotel quarantine was to be a blanket 14-day mandatory quarantine with no allowances to let people leave early if they were negative to coronavirus.

"In large part that's because testing cannot tell you that you won't develop symptoms in that 14-day period," Professor Sutton said. 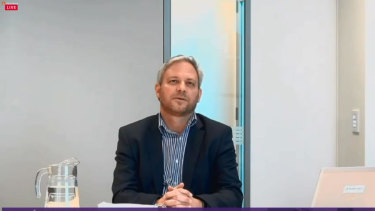 "Going the entire 14 days is the only absolute, or relatively strong assurance, you can have that someone isn't infectious."

So, what about that document?

Here's a little more from Tammy Mills about the mystery document we touched on earlier:

An internal email between key decision-makers revealed they considered only "high-risk" returned travellers to be quarantined in hotels, the inquiry heard.

Before March 29, returned travellers were being quarantined at home.

The email, read to the inquiry, said: "In addition to the existing enforced quarantine arrangements…for international travellers arriving in Australia, it is recommended that in high-risk cases, monitored placement in a facility such as a hotel is enforced for those who would normally reside with others at home."

"Was that reflective of your preferred position?" Counsel assisting the inquiry Ben Ihle asked Professor Sutton.

"No, I wasn't," Professor Sutton replied.

"I was supportive of the National Cabinet's determination that all returning travellers should be in hotel quarantine."

Chief health officers from across the country did not formally endorse the hotel quarantine program before Prime Minister Scott Morrison announced it.

Professor Sutton's statement to the inquiry reads: "As discussed, prior to National Cabinet's announced on 26 March 2020, the AHPPC did not endorse the idea of quarantining travellers at hotels (or other designated facilities)." 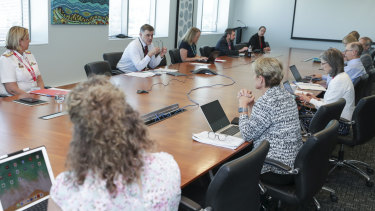 The AHPPC is the Australian Health Protection Principal Committee, which is made up of all state and territory chief health officers and chaired by the Chief Medical Officer. At the time that was Professor Brendan Murphy.

A transcript of the press conference that Prime Minister Scott Morrison gave to announce the hotel quarantine program was shown to the inquiry.

Mr Morrison said: "The decision that I communicate from this podium are the decision of all Premiers, Chief Ministers, and myself. This is not some personal view of mine, these are the decisions of the National Cabinet based on the medical expert advice that we receive in terms of the restrictions that are necessary to deal with the management of the outbreak of the virus in Australia."

The AHPPC met following the announcement and, the inquiry heard today, there was "still no agreement or resolution to advise to that effect."

"Do you agree with that?" Counsel assisting the inquiry Ben Ihle asked.
"Yes," Mr Sutton said.

Professor Sutton has been asked about edits in a document that suggest only "high risk" returned travellers be made to quarantine.

Professor Sutton said he could not recall if those edits were his, but insisted his view at the outset was for all returned travellers to be quarantined in hotels.

Although it was a constraint on individual liberties, it was "necessary and proportionate" to do so, he said.

We're at the first 15 minute break.

Counsel assisting the inquiry Ben Ihle cited an example of a person who completed quarantine at the Stamford Plaza and then tested positive for COVID-19. 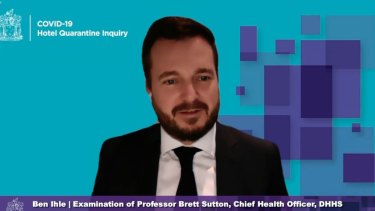 The genomics traced their version of the virus back to the hotel, where there had been an outbreak of coronavirus among returned travellers and security guards working there in June.

"That person, unaware they were COVID positive, actually transmitted COVID to the person who drove them away from hotel quarantine," Mr Ihle said.

"I think that has become part of the reflections on strengthening the testing regiment in hotel quarantine for that very purpose," he said.

The inquiry has just heard people were released from hotel quarantine without knowing if they were positive for COVID-19 or not.

In the first stages of the program, which began on March 29, testing was voluntary and only given to those with symptoms. 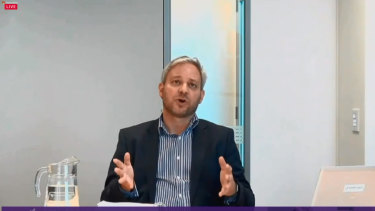 Two sets of tests were then introduced, on day three and day 11 of the fortnight that international arrivals were in quarantine.

Still, the testing was voluntary, at least until a new law was introduced so that people who refused to be tested on day 11 could be held for a further 10 days.

But even if someone agreed to a day 11 test and returned a positive sample, they couldn't be held for longer than the 14-day period.

The inquiry heard these people who were positive and released were then subjected to isolation orders are home.

How did YOUR MP vote in crunch Brexit poll? Full list of results

Who was Samuel Paty? Teacher decapitated in Paris attack