Fed-up residents on a housing estate in Motherwell erected a steel fence to keep yobs out after being plagued by antisocial behaviour.

People living on the Scottish estate have said they are at ‘breaking point’ as youths making their way to and from the vicinity of Airbles Train Station have turned the area into a ‘war zone’.

They claim their lives have been made a misery over the last few years, with cars and houses repeatedly vandalised and children frightened to leave their homes.

Residents erected the steel barrier, which blocked off a public footpath in the Elmhurst estate, but it has since been removed by North Lanarkshire Council workers who were accompanied by police officers. 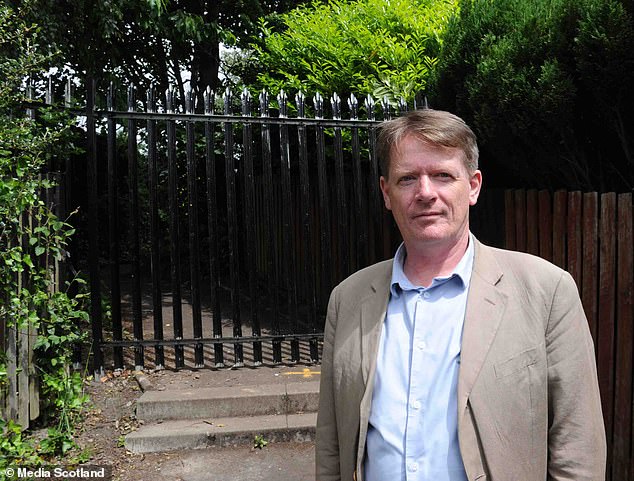 Residents on a housing estate in Motherwell have erected a fence to keep yobs out after being plagued by antisocial behaviour. Pictured: Resident Stephen Colbert

School teacher Kenny Krievs, 39, who lives on the estate, said residents were forced to take matters into their own hands: ‘The last few weeks are the first time I’ve felt it safe for my daughter to play in the street.

‘I’ve been living here for 10 years and the last couple of years it’s been off the charts.

‘They come from everywhere and get the train to Airbles to go to Baron’s Haugh.

‘There was a boy living right beside the lane who was pretty much ran out of his home.

‘He had his windows smashed, door chapped almost every night. We’ve tried to keep our decorum and some residents just thought a fence had to be put up for respite.’

People living near the lane have cited terrifying incidents, one in which a youth jumped on to the railway line to escape a car trying to run him over, and another where a young man was chased down the lane with a machete, covered in blood.

They also claim groups of youths openly drink alcohol, with some seen carrying baseball bats, and that families with children who have health issues or additional support needs have also been targeted.

But the fence erected by residents did not meet with everyone’s approval. 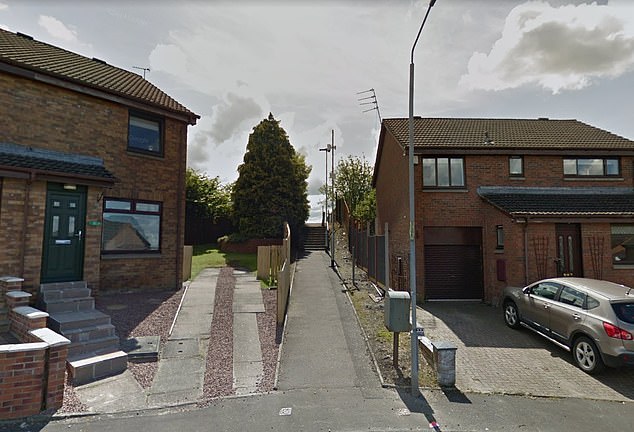 Residents erected the steel barrier, which blocked off a public footpath in the Elmhurst estate (pictured), but it has since been removed by North Lanarkshire Council workers who were accompanied by police officers

Resident Stephen Colbert said: ‘I use the path three or four times a week and have done since I moved to Motherwell.

‘I have spoken with several people who were surprised and disappointed to see the fence. These are regular folk who use the path. Some use it to go to work, especially commuters as it provides access to Airbles Train Station.’

And, after less than two weeks in situ, the local authority removed the fence.

The council is considering the partial realignment of a section of the walkway which has ‘core path’ status.

Officially known as Core Path 281, Airbles Road – a four-week consultation period on the proposal finished on May 31.

Another resident, who asked not to be named, said: ‘It’s a scandal. I had a boy throw himself at my window because he thought I was watching him, he could have came right through it.

‘There’s a young laddie lives in the street who won’t leave his house because he is terrified. It’s a disgrace.’

A woman living nearby, who also asked not to be named, told Lanarkshire Live: ‘It’s a disgrace. People’s lives are being made an absolute misery. The police don’t really have any powers to deal with kids under 16.

‘Blocking the lane will add five minutes on to someone’s journey but the antisocial behaviour outweighs everything else.’

Councillor Paul Kelly, who represents Motherwell West and is depute leader of North Lanarkshire Council, said: ‘The antisocial behaviour suffered by local residents by some people using the lane is completely unacceptable.

‘I know from talking to residents that this has had a severe impact on their daily lives. I am absolutely committed to working with residents, the council and police to do all we can to find a solution to this.’

A council spokesperson said: ‘A report was presented to Motherwell Community Board in March after a petition was submitted requesting the closure of core path 281 because of antisocial behaviour.

‘The report set out the legal process for proposing a diversion of part of the path to a new route through the Elmhurst Estate, further to the west.

‘A 28-day consultation was held in May and objections were received to the proposed diversion. A report will be submitted to the Environment and Transportation Committee in August.

‘Under the terms of the Land Reform (Scotland) Act 2003 the council has a duty to remove barriers preventing the responsible use of a person’s access rights. As a result, the council removed the fence on Tuesday June 22.’

Boris Johnson nominates Labour rebels for the House of Lords

Firefighters use aerial ladder to hoist obese patient with coronavirus