Australia was told last year that it was nothing more than “chewing gum stuck to the bottom of China’s shoe”, and that “sometimes you have to find a stone to rub it off”.

In the face of this charming overture from propagandist Hu Xijin, editor of the Chinese Communist Party-owned Global Times, Australia is beginning to discover that it’s not entirely worthless or powerless in its dealings with Beijing after all. Six developments in recent days and weeks illustrate the point. 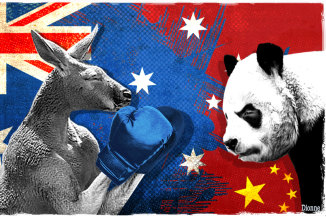 Beijing had put bans on more than $20 billion worth of Australian exports to China and then issued its list of 14 demands on Australian sovereignty. We were left to suffer and reflect on our sins. From the outset, Xi Jinping’s regime was careful in choosing the trade to be banned. It did not ban the biggest trade of all, Australian iron ore, essential for steelmaking. But Beijing calculated that it could live without Australian coal, beef, barley, wine, seafood and more.

It was wrong. In recent days we discovered that China quietly has set aside its ban on Australian coal. Bulk carriers that had anchored off China’s ports a year ago were now being called to unload their cargoes. London’s Financial Times last week reported that some 400,000 to 500,000 tonnes of Australian shipments had been discharged in the preceding month.

That’s small beer. But the point is that China’s electricity crisis is so painful that it has been forced to partially lift its boycott to keep the lights on and the factories running. Australia did not yield to any of Xi’s demands; the vast bulk of the Australian export trade merely diverted to other markets, notably India, instead.

Australia coped pretty well with China’s ban, but China did not. That’s the first development. Among all the Australian industries boycotted by Beijing, the total value of lost sales to China was $5.4 billion in the year to June 30, while those very Australia exporters gained new sales of $4.4 billion in other markets, Treasurer Josh Frydenberg says. “Despite China’s wide-ranging actions, our economy has continued to perform very strongly.” And, overall, total Australian goods exports to China have hit a record high, largely because of a surge in the value of iron ore.

The second development came last month when Xi asked permission to join a big Asia-Pacific trade grouping with a collective GDP of about $US11 trillion. The 11-nation Comprehensive and Progressive Agreement for Trans-Pacific Partnership, or CPTPP, has been described as a “21st century” agreement because it embodies high labour and environmental standards.

Its members include Japan, Canada, Vietnam, Malaysia, New Zealand and Singapore. Australia, too. As a consensus-based organisation, every member must agree to admit any newcomer. China’s embassy in Canberra lobbied the Australian Parliament in a submission that promised “China’s accession to the CPTPP would yield large economic benefits”. Trade Minister Dan Tehan said Canberra couldn’t agree as long as Beijing had trade sanctions in place against Australia. And neither is Japan nor Canada excited at the prospect of Beijing joining.

The third new development is last month’s announcement of AUKUS. The Australia-UK-US security partnership promises to merge the three nations’ defence science and technology, industrial bases and supply chains. Plus there is the prospect of a transfer of submarine nuclear propulsion technology to Australia.

The retired US admiral and former supreme commander of NATO, James Stavridis, described the pact as “a serious worry for China” because “with eight of them ultimately flying the Australian flag, the subsurface flotilla will have the ability to interdict China’s technologically inferior and mostly diesel-powered submarines; protect allied sea lanes of communication to and from Australia; and operate seamlessly with US and British nuclear submarines and carrier strike groups”.

Fourth was the move by US President Joe Biden to elevate the Quad group – Australia, India, Japan and the US – to a leaders’ level group. Its intellectual father, Japan’s Shinzo Abe, calls the Quad a “democratic security diamond”. Once again, other nations are reconfiguring geopolitical arrangements to balance against China.

Fifth were the 17 naval vessels from six nations that conducted joint naval manoeuvres in the Pacific last week. They represented Australia, Canada, Japan, New Zealand and included US and UK aircraft carrier strike groups. Notably, a US Marine J-35B fighter jet landed and took off from a Japanese helicopter carrier. Meaning that, for the first time since World War II, Tokyo is showing willingness to operate a de facto aircraft carrier.

The senior British officer, Commodore Steve Moorhouse, said the joint exercise was “an important message for those here that nations like ourselves really do believe in the freedom of navigation, in the freedom of trade and really are alarmed at the militarisation of the area. Chinese intelligence-gathering vessels were in the region, so I have absolutely no doubt the message would have been relayed back to China quite quickly.”

Finally, former Australian prime minister Tony Abbott touched on Beijing’s ultimate pressure point with his visit to Taiwan on the weekend. Once an enthusiast for Australia’s China relationship, Abbott said “the scales have fallen from our eyes” in the past few years. While he emphasised he was speaking “to the Australian government” and not “for the Australian government”, he pledged to encourage Australia to deepen its engagement with Taiwan: “I don’t think Australia should be indifferent to the fate of a fellow democracy of almost 25 million people.” Opinion in the Australian government was already moving in that direction. Abbott wants to hasten it.

So the emerging evidence is that Australia has leverage and value in its China relationship, resilience and agency in its own right, and that it is both a participant and a leader in shaping the new geopolitics as nations coalesce in response to Xi’s aggression.

Of course, that doesn’t mean Xi will relent. Only that he will need a bigger stone.

The Opinion newsletter is a weekly wrap of views that will challenge, champion and inform. Sign up here.

Schools breed misogyny but we can break the cycle

Cow is born in Indonesia with two heads