Britain’s LOST decade: How autumn budget will see salary increases over the past eight years wiped out over the next two as families face biggest drop in household income in history… but ‘inflation will fall below 2% by 2024’

British families are facing a lost decade of pay growth as inflation is set to erode years of improving living standards.

Rising prices over the next two years will completely wipe out salary increases built up over the last eight, according to the Government’s Budget watchdog.

The 7 per cent fall in living standards will be the biggest since records began in the 1950s, hitting spending and triggering a recession which began in the third quarter of this year.

The slump will last for just over a year, the Office for Budget Responsibility (OBR) predicted, wiping 2 per cent off the size of the economy.

And as businesses feel the squeeze, they will begin to axe jobs. Unemployment is expected to rise from its current level of 3.6 per cent to 4.9 per cent in the third quarter of 2024 – putting 505,000 people out of work. 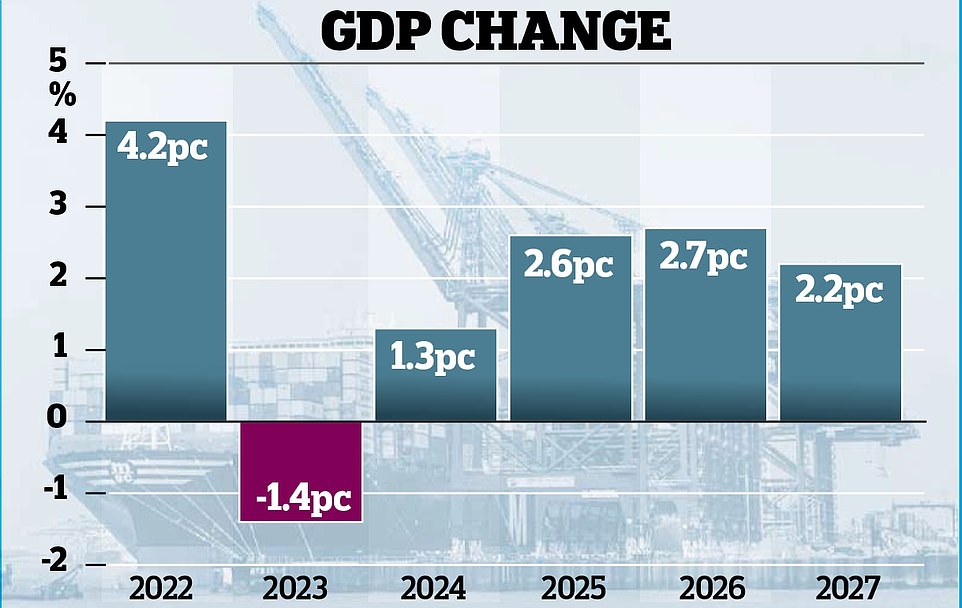 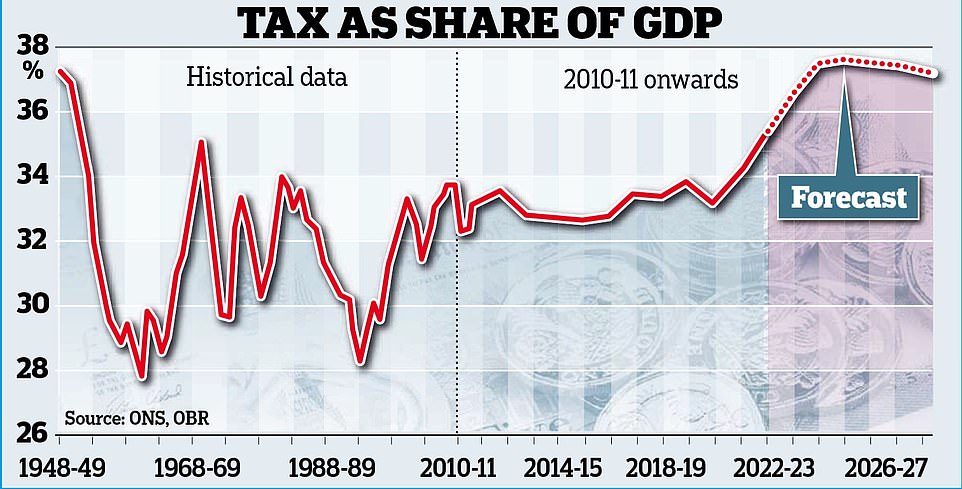 The gloomy predictions came as Jeremy Hunt unveiled a £55billion plan to hike taxes and cut spending, in an effort to get the public finances back on a more sustainable footing.

Economist Thomas Pugh, of accountancy firm RSM, said: ‘The OBR’s forecasts paint a dire picture of the economic outlook over the next two years, with a year-long recession and a record-breaking fall in households’ real incomes.’

Paul Johnson, director of think-tank the Institute for Fiscal Studies, said: ‘The next two years look grim in terms of living standards.’

It came as the Chancellor announced a swathe of stealth taxes in an attempt to patch the gaping hole in the public purse. Britain’s tax burden is now set to rise to its highest sustained level since the Second World War.

Mr Hunt acknowledged that ‘in the face of unprecedented global headwinds, families, pensioners, businesses, teachers, nurses and many others are worried about the future’.

But he said his efforts to boost the Treasury coffers would lead ‘to a shallower downturn’, and were necessary to ‘give the world confidence in our ability to pay our debts’.

Households’ real disposable income – the amount of cash they have to spend after tax, taking inflation into account – will tumble by 4.3 per cent in the 2022/23 financial year, the OBR predicted. 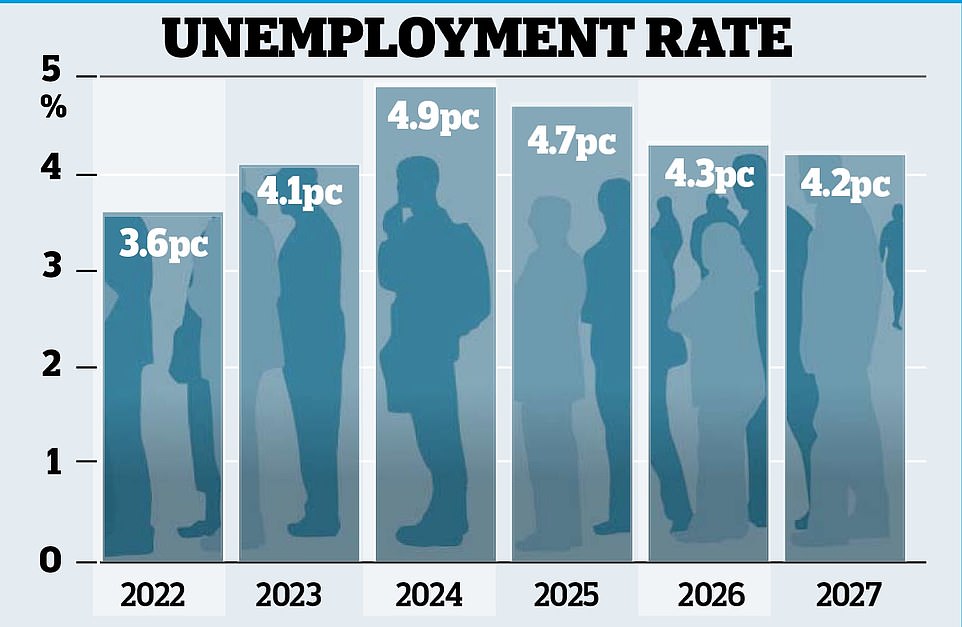 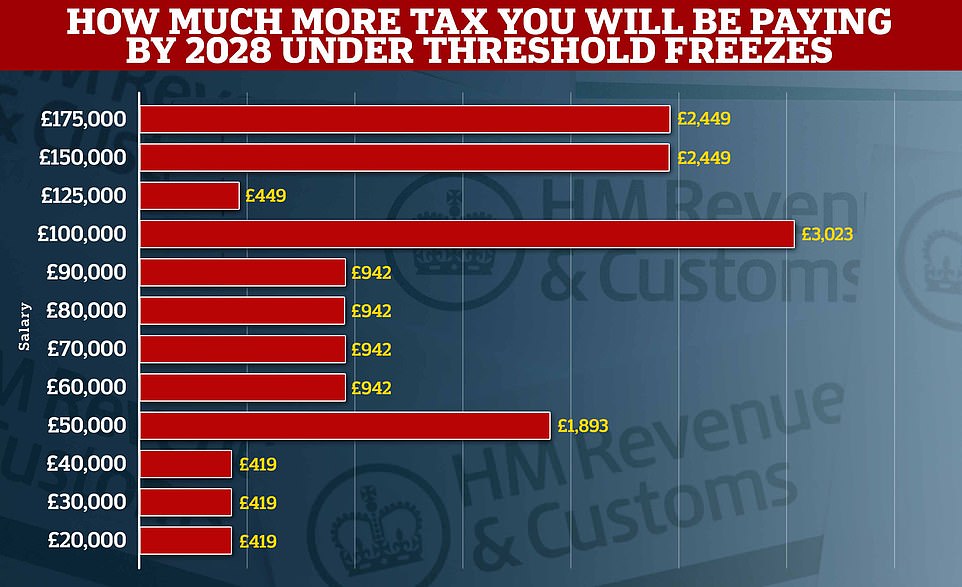 This is the largest slide since records began in 1956/57. The next year, it will fall by another 2.8 per cent – only the third time on record that living standards have fallen for two years in a row.

By April 2024, households’ disposable income will be at its lowest since 2014.

Living standards will only recover to last year’s level by 2027/28, and even then will remain more than 1 per cent below pre-pandemic levels.

While wages have been rising on average over the last two years, as businesses tried to lure in staff post-pandemic, all of these increases and more have been eroded by the red-hot rise in the cost of living.

For the full year, inflation will average out at 9.1 per cent. Next year it will remain high for the first half of the year before falling sharply, averaging out at 7.4 per cent.

In the near-term, the squeeze on households will pull down economic output, or gross domestic product (GDP). 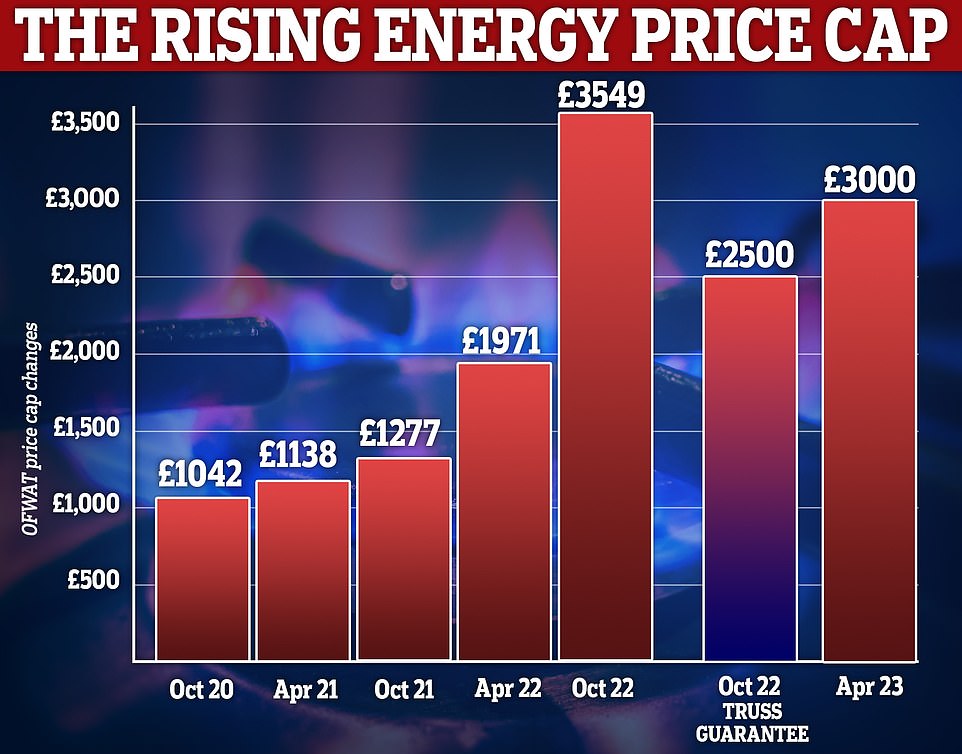 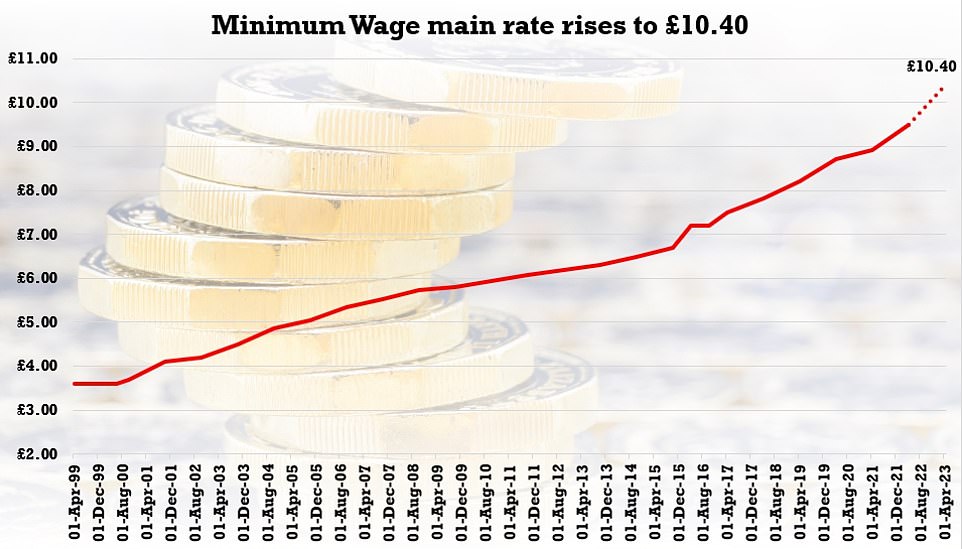 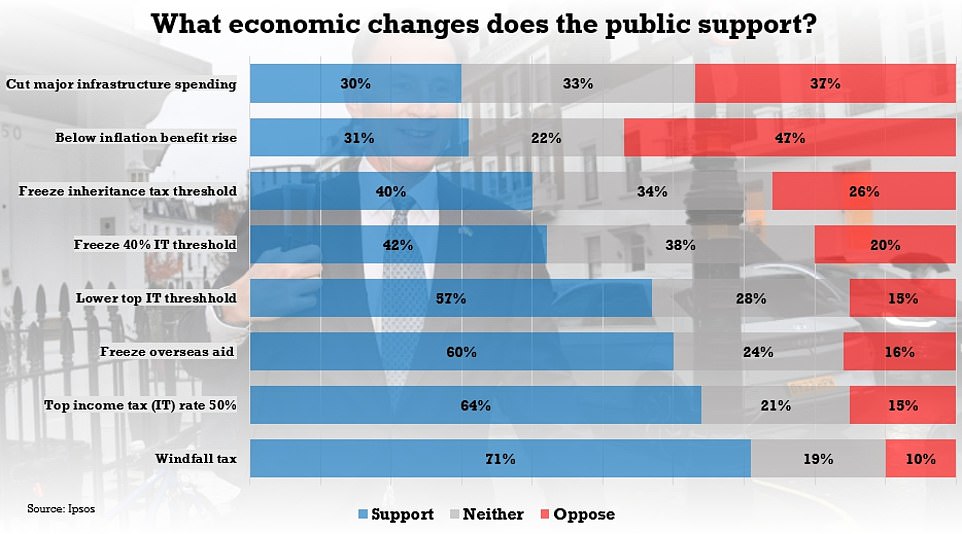 The OBR’s economic forecasts were slightly more optimistic than those issued by the Bank of England last month, as the watchdog is assuming households will give up on saving as the recession bites and simply splash their cash.

David Miles, of the OBR, said: ‘The savings rate of the household sector in the UK will fall very substantially, perhaps even close to zero, having been very high in the unusual circumstances of 2020 and 2021 during lockdowns.

‘We think those that can are likely to dip into excess savings they made back then. That means the projection we have for consumer spending is a fair bit stronger than the Bank of England’s.’

Now for the positive news: Inflation ‘will fall below two per cent by 2024’

Inflation has peaked and will be back below its 2 per cent target by 2024, the Budget watchdog predicted yesterday.

The rise in the cost of living – currently at a 41-year record of 11.1 per cent – will stay high for the first half of next year, the Office for Budget Responsibility (OBR) said.

But after that it will fall back sharply, averaging 7.4 per cent next year as a whole and just 0.6 per cent in 2024. By 2025 prices will fall, with the OBR predicting deflation of 0.8 per cent, driven by the falling cost of energy and food. 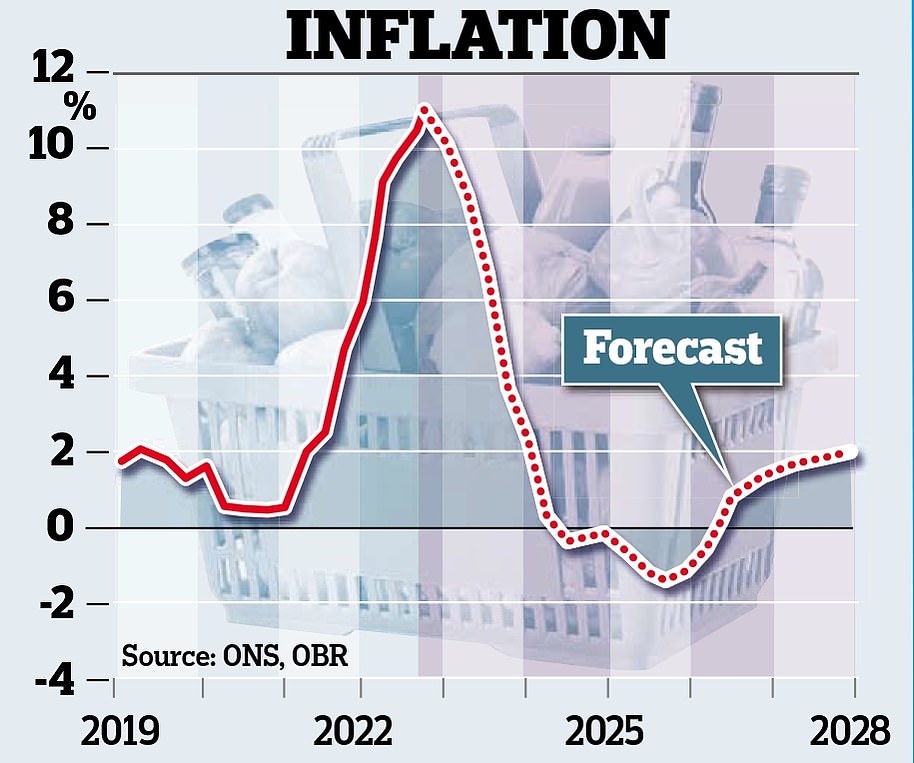 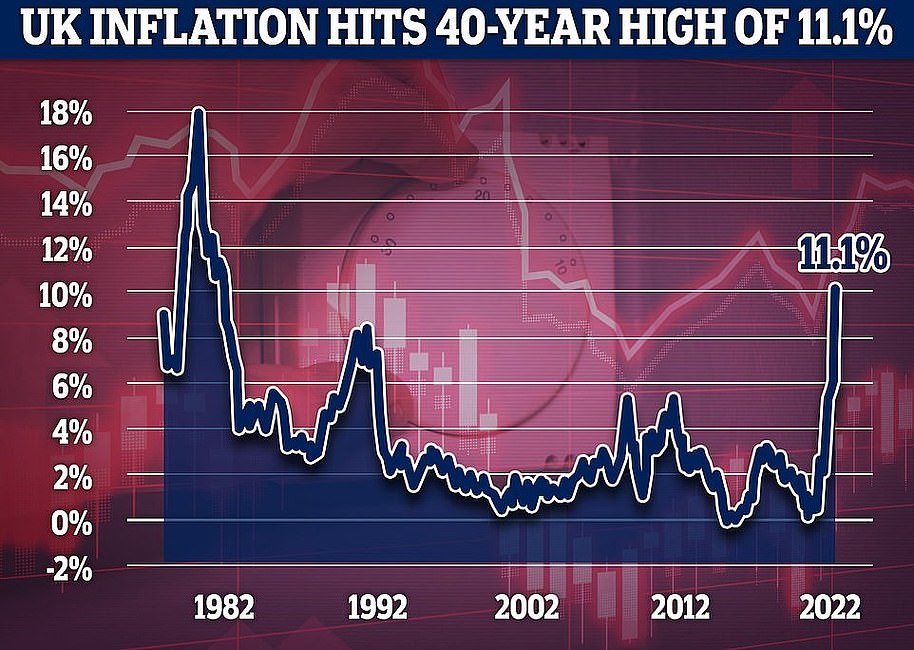 Deflation is usually bad news for an economy as it signals a weakness in a nation’s financial health, but it would come as a relief for households that will have endured two years of falling living standards.

By 2027 inflation will have picked up again to 1.7 per cent, the OBR said. Chancellor Jeremy Hunt added: ‘High inflation is the enemy of stability. The OBR confirm that because of our plans, the recession is shallower and inflation is reduced.’

The Energy Price Guarantee, brought in by former prime minister Liz Truss and extended yesterday by Mr Hunt, has kept a lid on inflation by limiting typical annual energy bills to £2,500 this winter and £3,000 from April. Without this, peak inflation could have surpassed 13.5 per cent. The Bank of England has raised its base interest rate to get inflation under control. This should encourage saving rather than spending, putting a lid on prices.

But it also makes borrowing more expensive for households and the Government, which must service its £2.4trillion debt.

The Bank has lifted its base rate to 3 per cent, a 14-year high, and is expected to bump it up to 3.5 per cent next month.

Woman in her 40s 'raped' on street as man, 36, held over sex assault and drugs possession