Forensic police are examining human remains that were found on a beach on the NSW South Coast on Friday evening, five days after a foot belonging to missing Sydney woman Melissa Caddick was found on a beach 160 kilometres further south.

A spokeswoman for NSW Police said the newly found remains were not being linked to Ms Caddick at this stage. They were located at Mollymook beach, three hours south of Sydney, about 6.30pm on Friday. 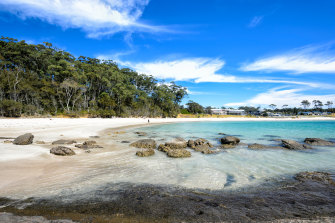 Officers from South Coast police district were called to the scene and the remains are being forensically examined, the spokeswoman said.

Mollymook beach is about 150 kilometres north of Tathra, where campers found a sneaker containing the decomposing foot of Ms Caddick that had washed ashore at remote Bournda Beach on Sunday.

Police confirmed the foot was a DNA matched to Ms Caddick on Friday, and said the missing businesswoman – who disappeared from her eastern suburbs home in November after a raid by Australian Federal Police – is now presumed to be dead.

Documents tendered in court since her disappearance revealed that Ms Caddick allegedly misappropriated millions of dollars from her clients.

NSW Police Assistant Commissioner Mick Willing told reporters on Friday that it was “still a mystery” how Ms Caddick came to enter the water, and that the time, manner and cause of her death would be a matter for the NSW Coroner. Police have not ruled out foul play.

“Police have always kept an open mind in relation to what the circumstances were for her disappearance, including the fact that Melissa may have taken her own life,” he said.

Police were advised that tidal and drift pattern modelling indicated an object that went into the water in the harbourside Dover Heights area in mid-November could have travelled as far south as Bermagui, he said.