Well-wishers gathered in Plymouth, Devon, to say farewell to the 18-year-old as her coffin was carried by horse and carriage to the church where her funeral was being held.

Many of the mourners were teenagers who answered a plea from Bobbi-Anne’s family to dress in black jeans with T-shirts of their favourite bands as she often did.

Bobbi-Anne was abducted by Ted Bundy-obsessed killer Cody Ackland as she waited to catch a bus near her home. She died after being hit multiple times with a claw hammer in November 2021.

Musician Ackland, 24, was last week jailed for a minimum of 31 years after he admitted her murder.

Plymouth Crown Court heard he had became ‘obsessed’ by US serial killer Ted Bundy among others and prosecutors said the similarity in his attack was stark.

During today’s funeral procession, Bobbi’s body passed the scene in Leigham in Plymouth where she was abducted.

The funeral procession left Bobbi-Anne’s home in Plymouth, Devon, at 11.20am today and headed to the Windmill Pub where members of the public were welcomed to line the streets. 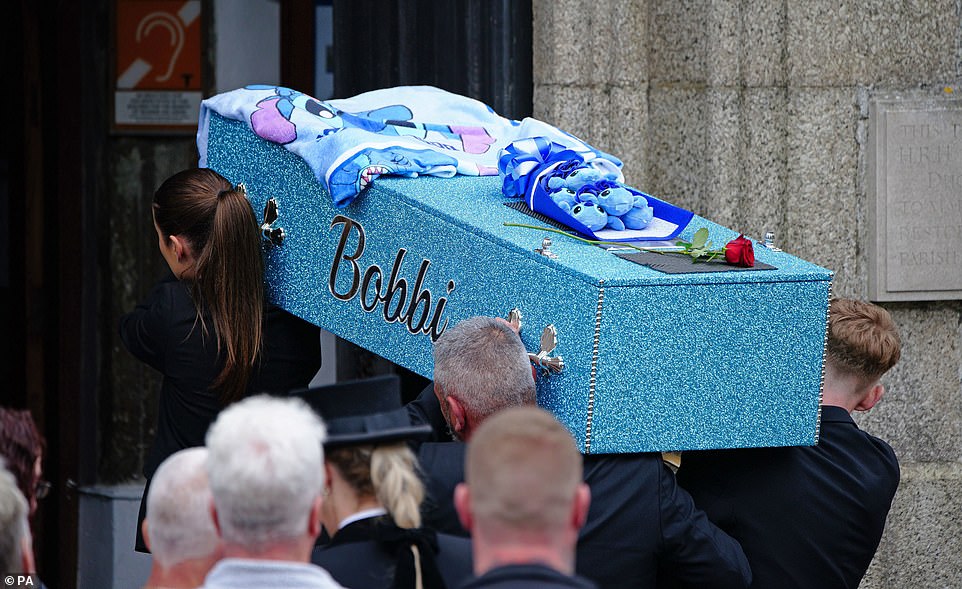 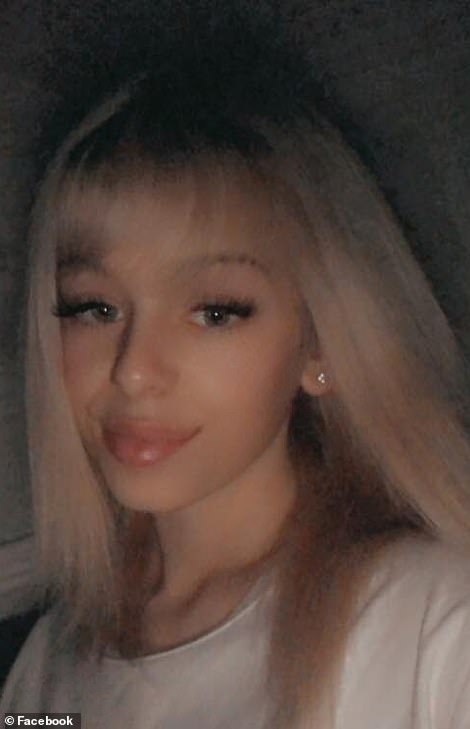 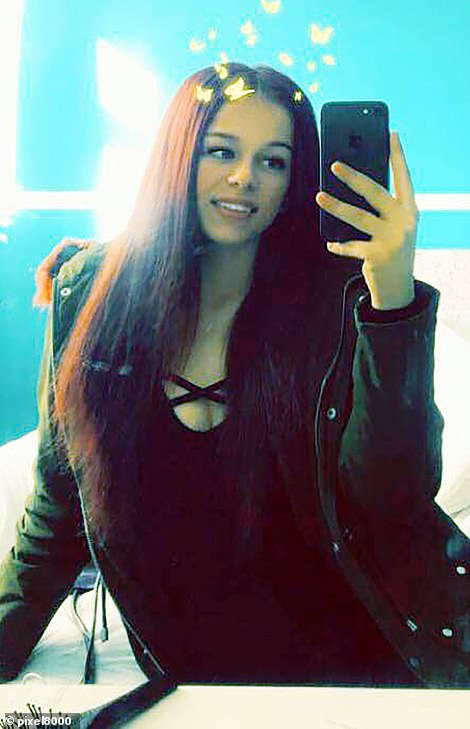 Teenager Bobbi-Anne McLeod (pictured above) was abducted by Ted Bundy-obsessed killer Cody Ackland, 24, as she waited to catch a bus near her home in Plymouth. She died after being hit multiple times with a claw hammer in November 2021 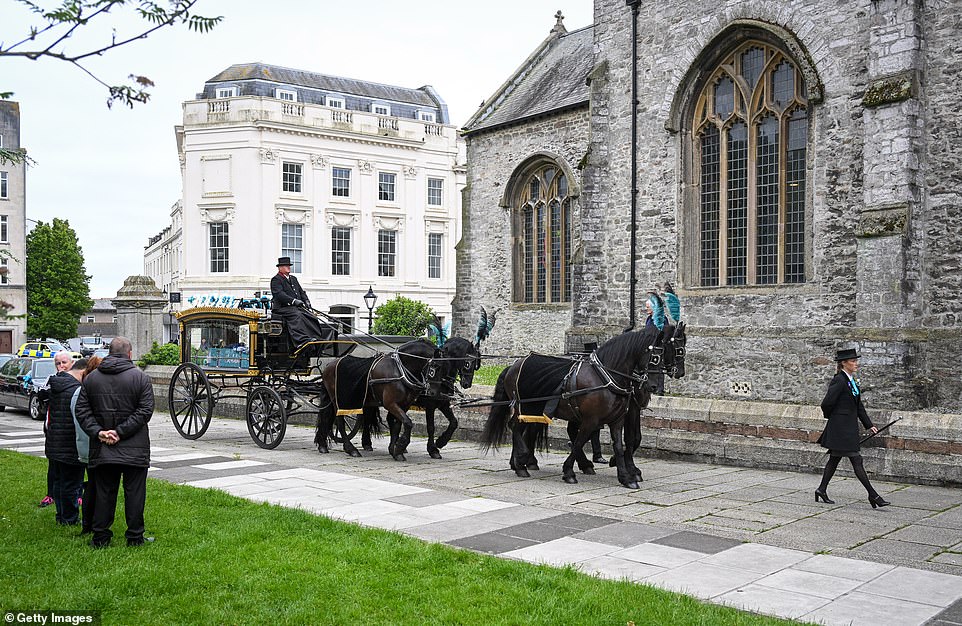 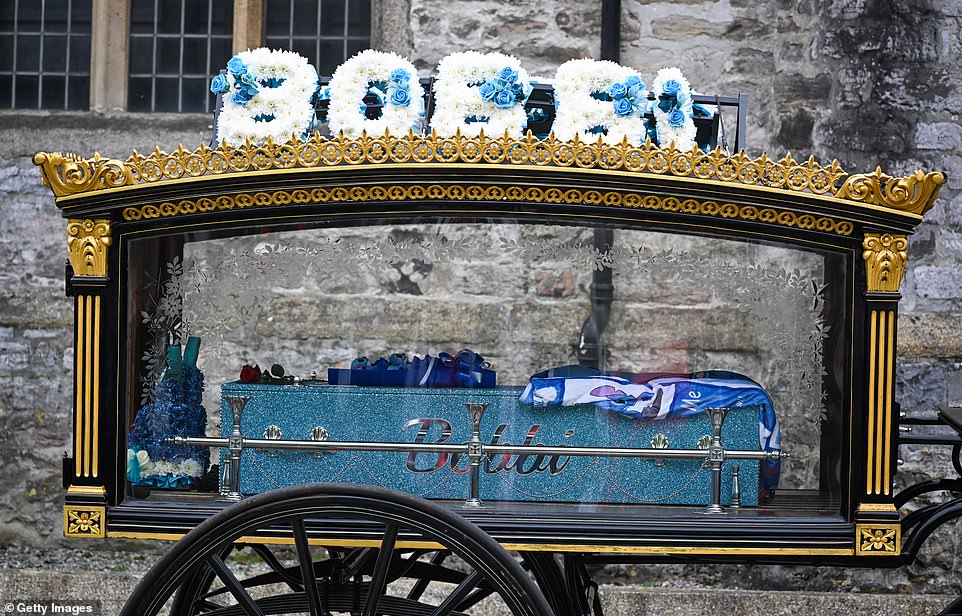 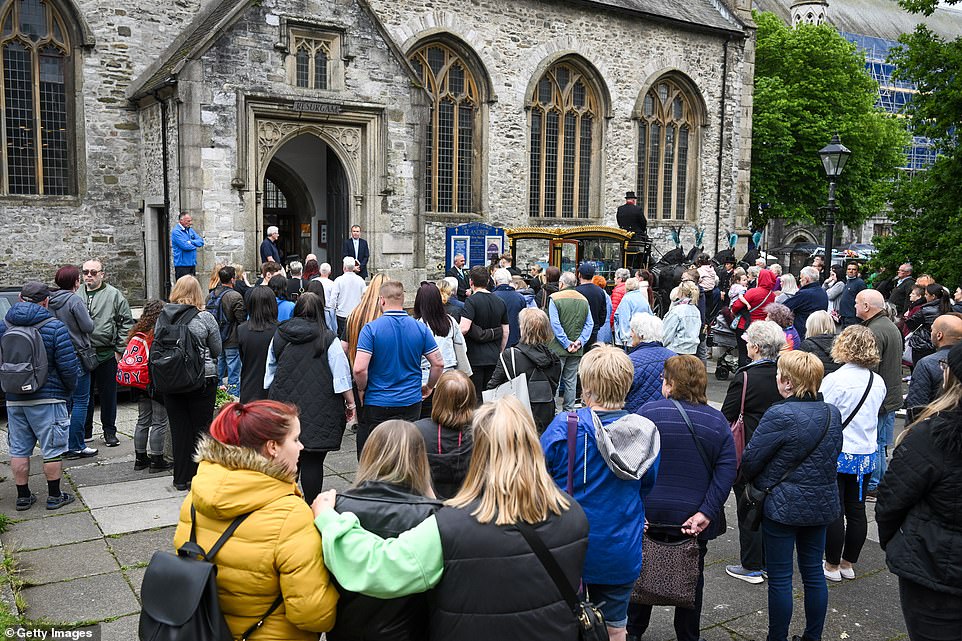 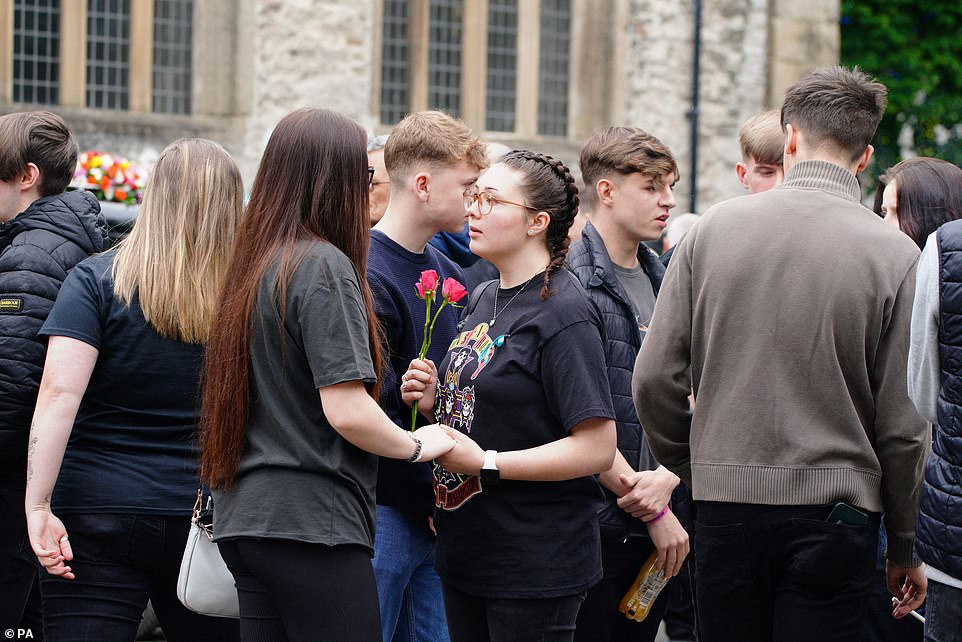 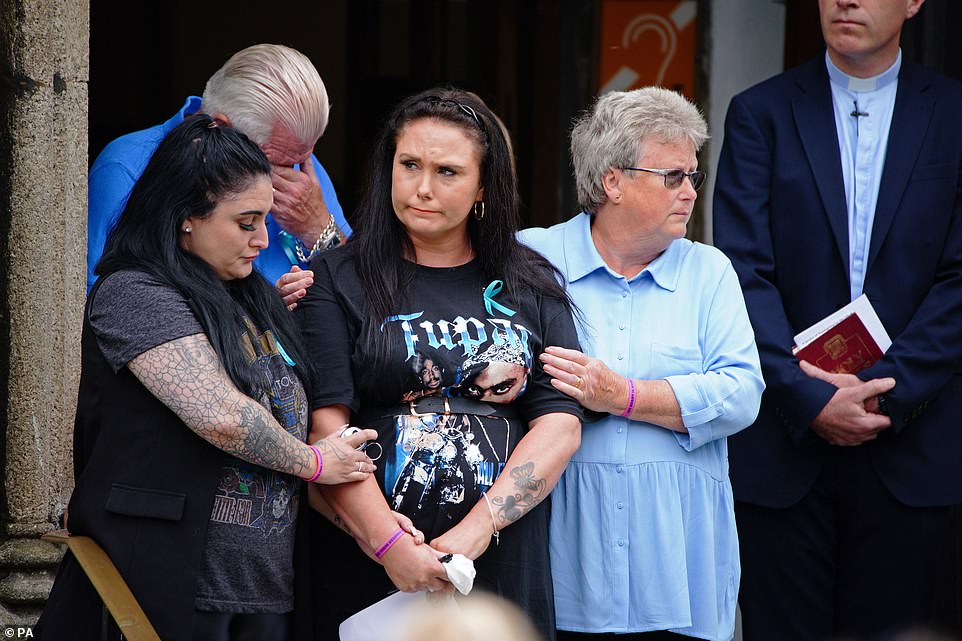 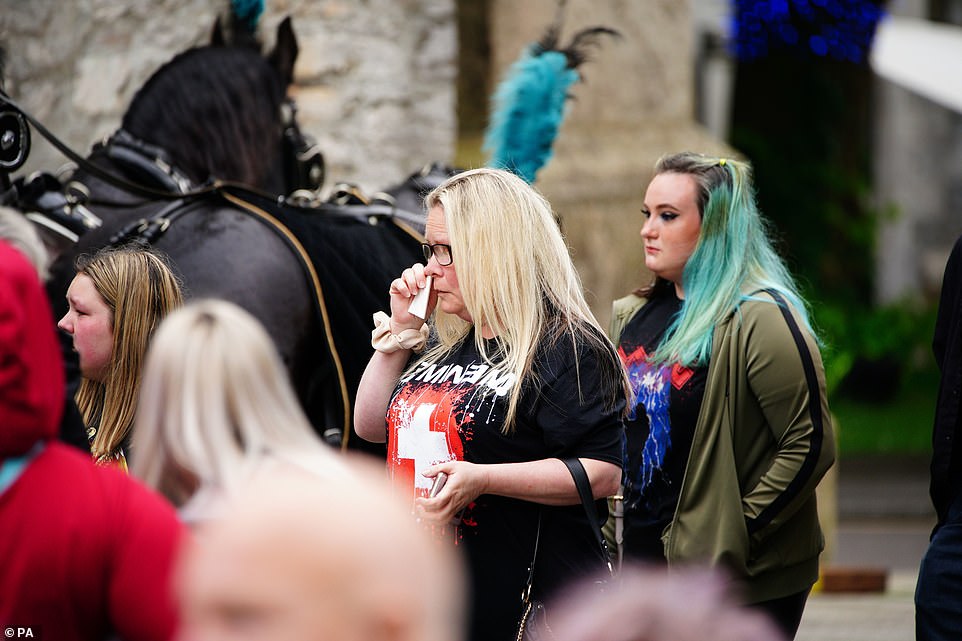 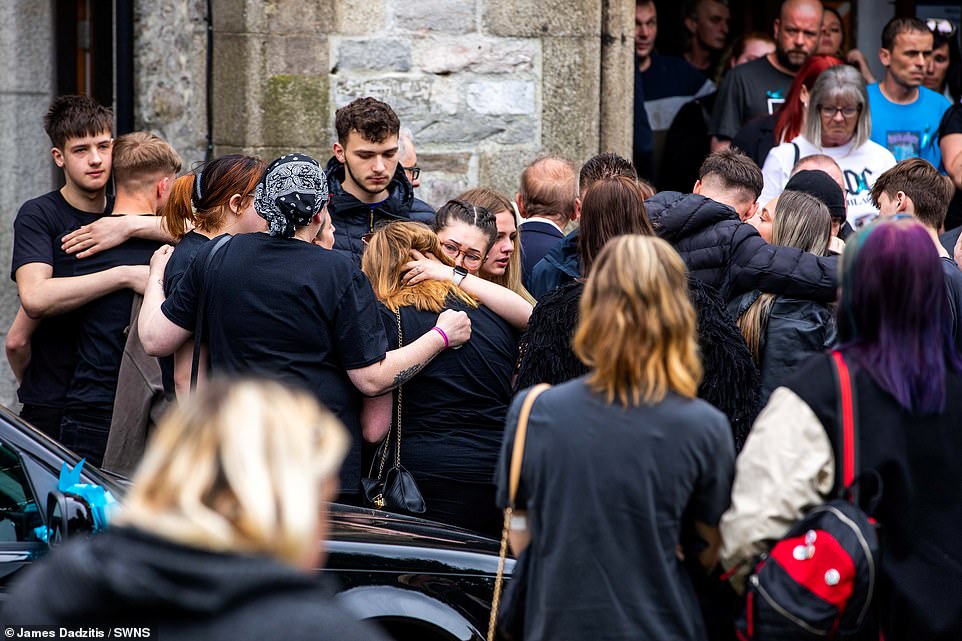 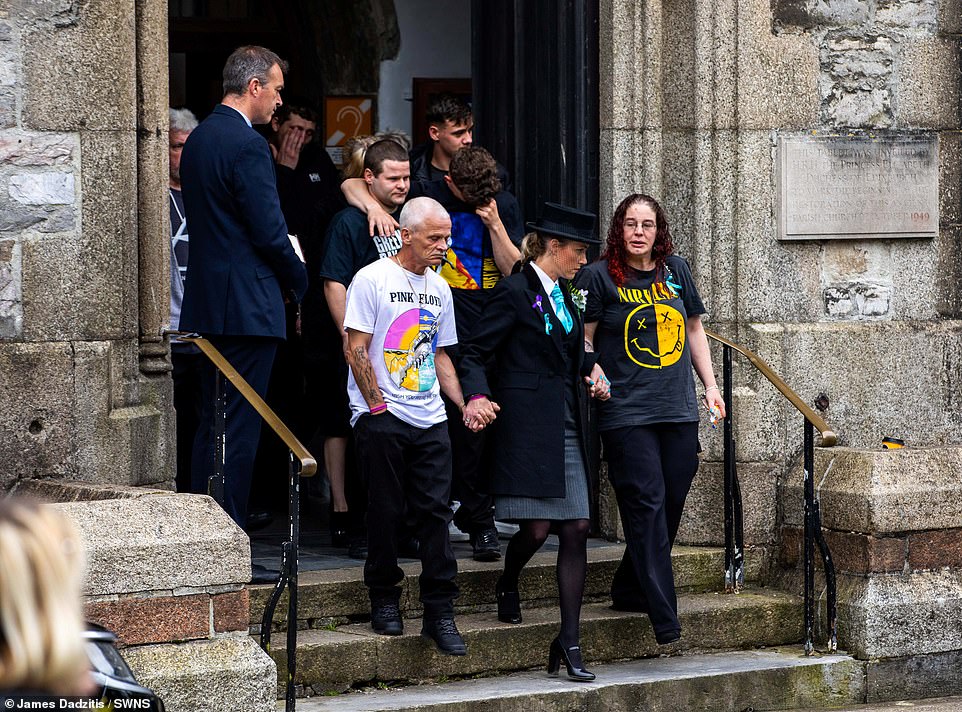 Pictured: St Andrew’s Church in Plymouth, Devon, where mourners were attending the funeral of Bobbi-Anne McLeod

From there a horse and carriage took Bobbi-Anne to St Andrews Church for the service at 12.30pm.

Watching her pale blue coffin marked with her name pass by, local mourners stood in near silence as police bikes escorted the carriage down the road.

There was a brief moment of applause at one point by observers, with many wearing band t-shirts or the colour blue as requested by the family.

The post read: ‘Bobbi will be leaving her home address at 11.20am and heading to the Windmill and will then be take by horse and carriage to the church.

‘If you would like to line the street in Leigham you are more than welcome. Dress code is band t-shirts such as Pink Floyd, Nirvana, ACDC, Green Day, Guns and Roses, Queen, Eminem and Oasis.

‘If you cannot get one just an ordinary blue t-shirt will be fine but please try for the band t-shirts as she loved wearing these with black trousers or black jeans, no rips please.’ 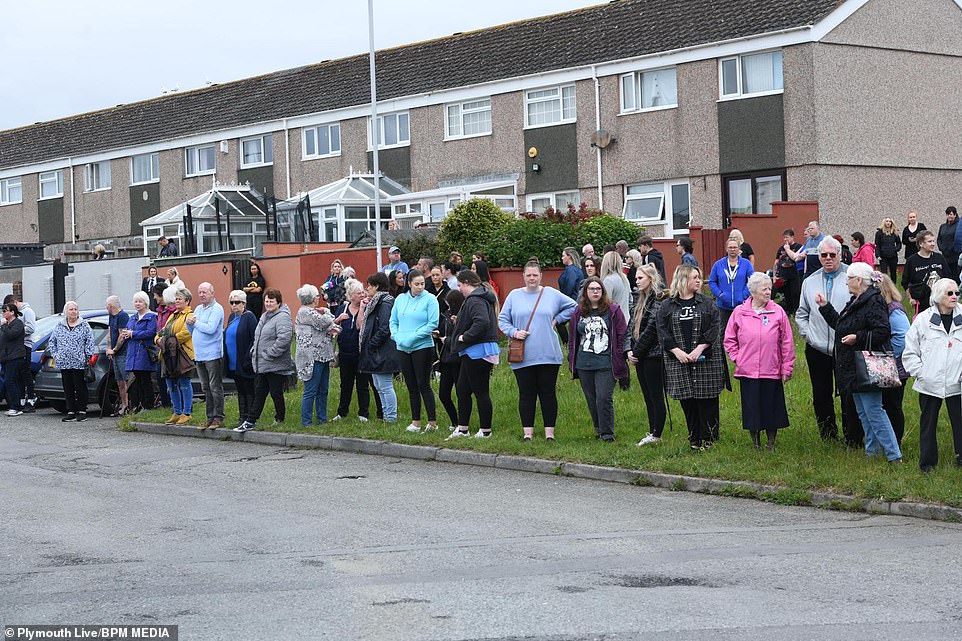 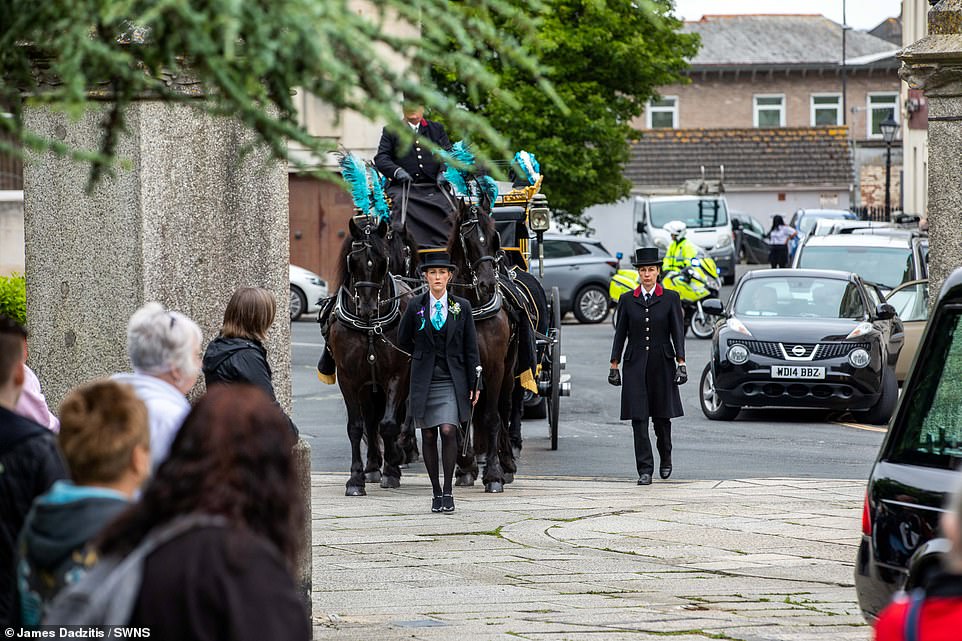 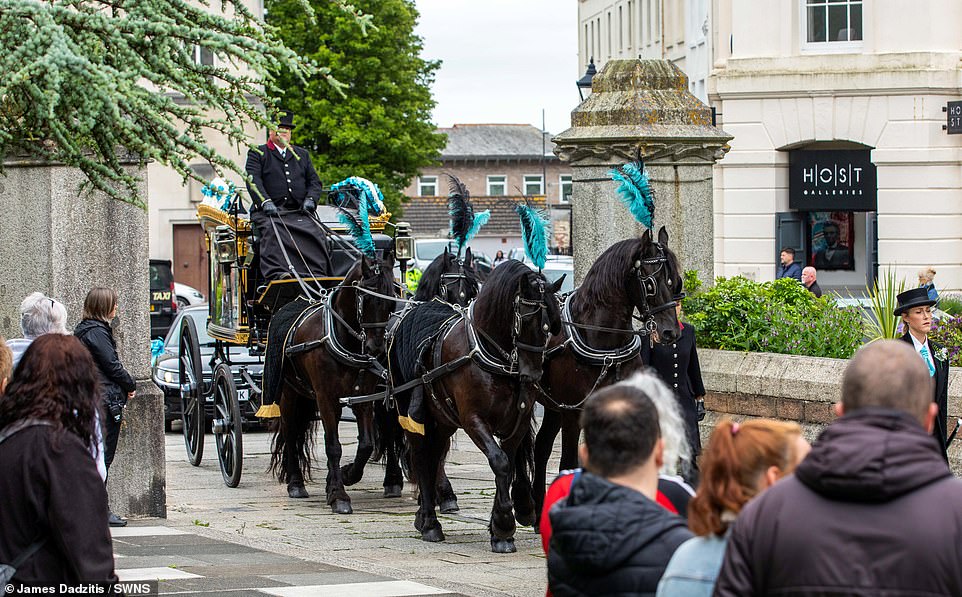 Pictured: A horse and cart dressed in Bobbi-Anne’s favourite colour arrived at the St Andrew’s Church in Plymouth 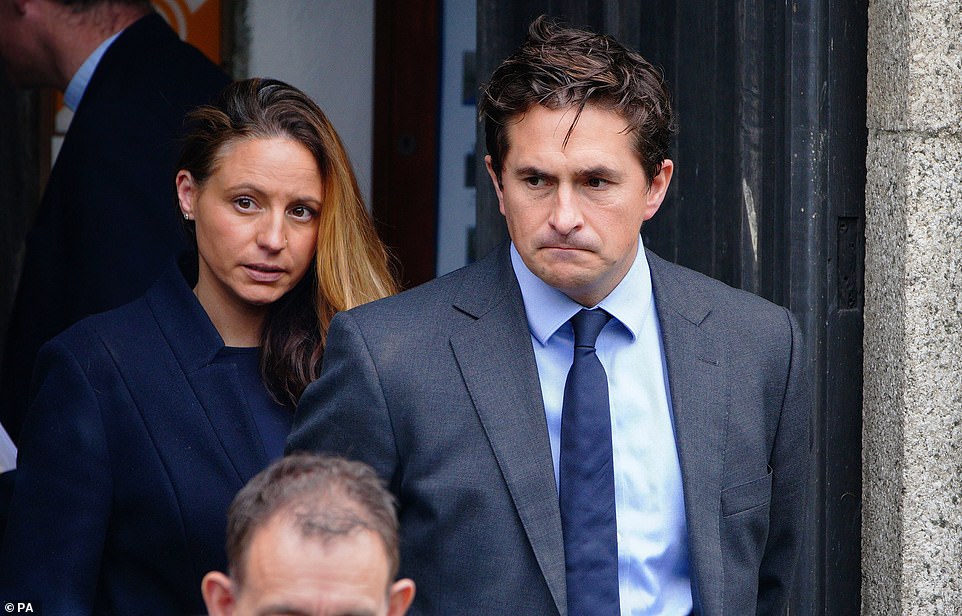 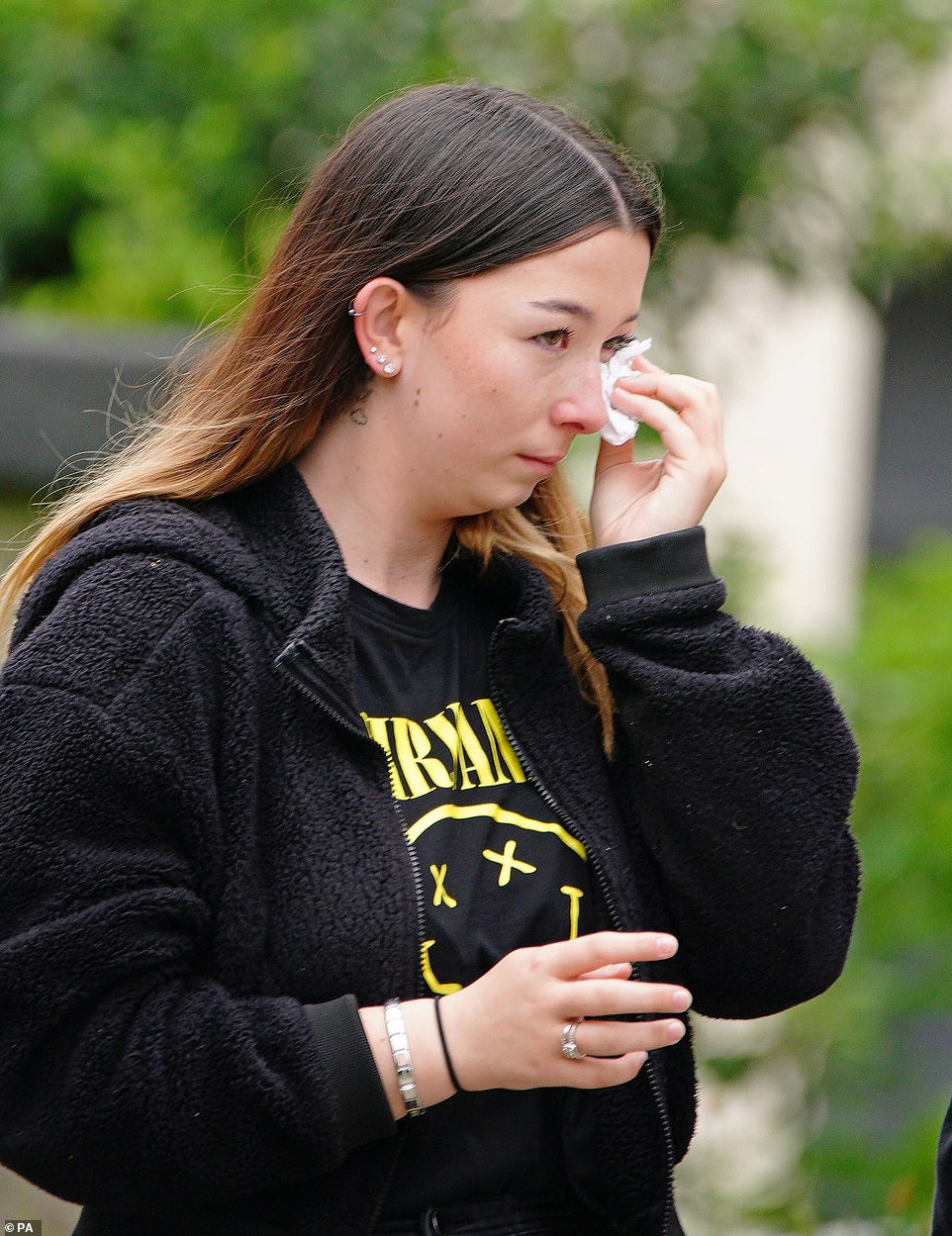 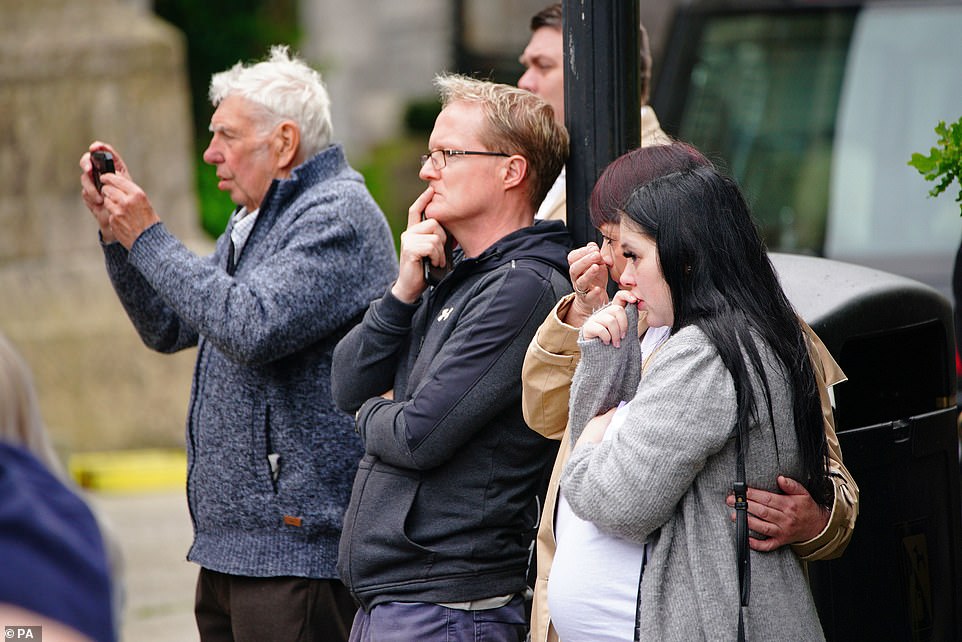 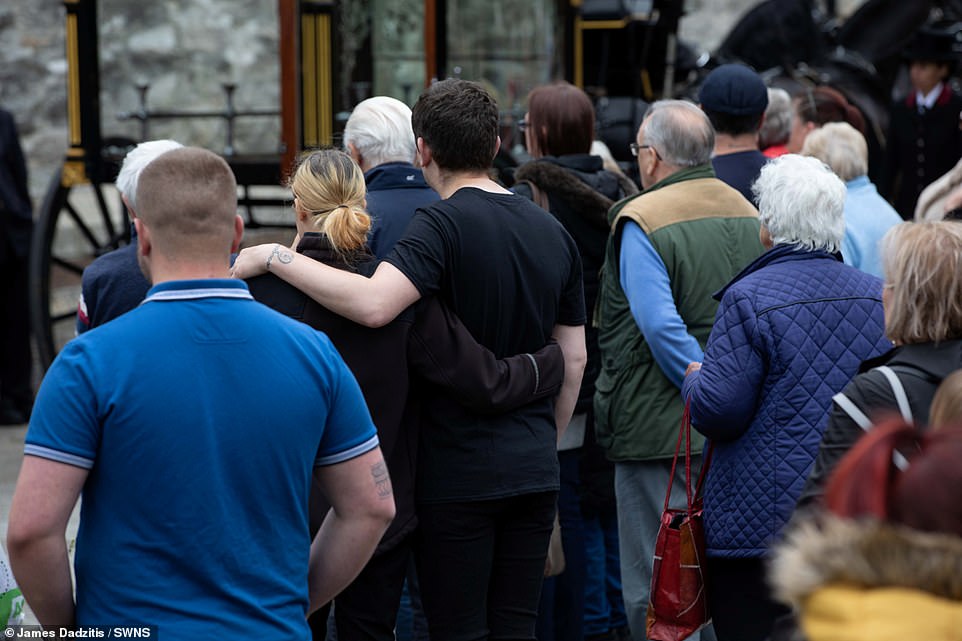 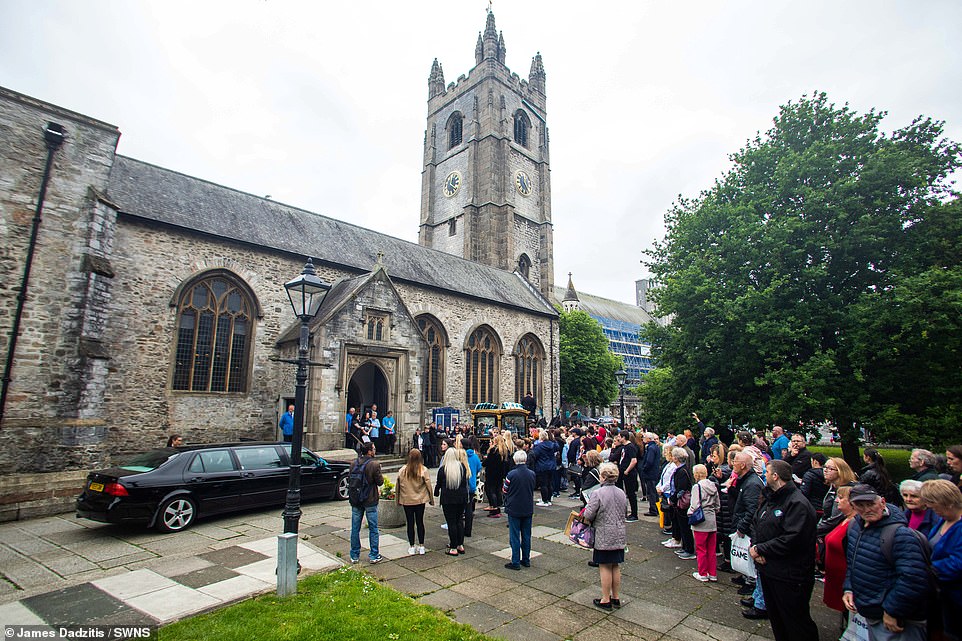 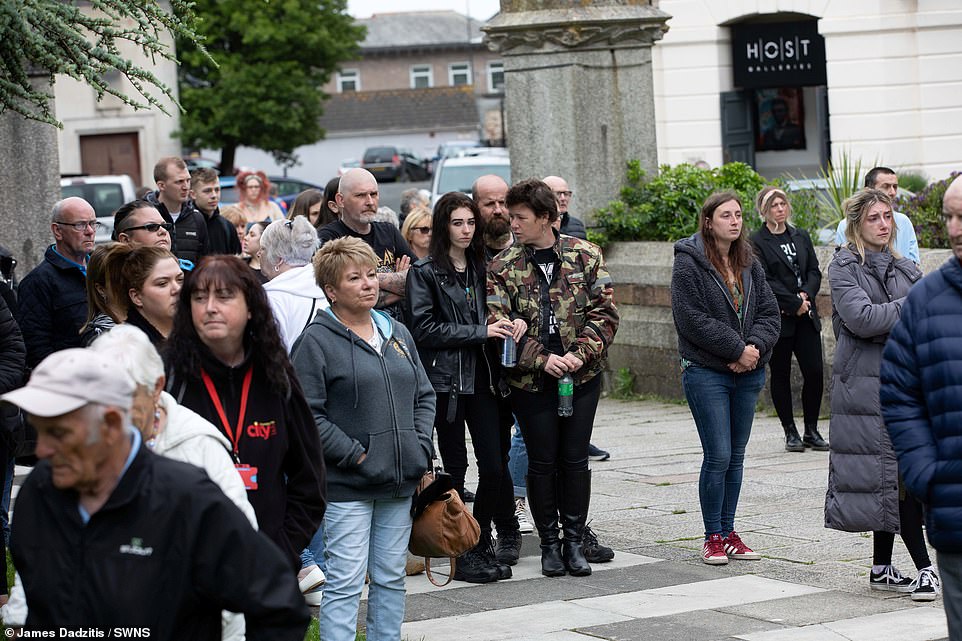 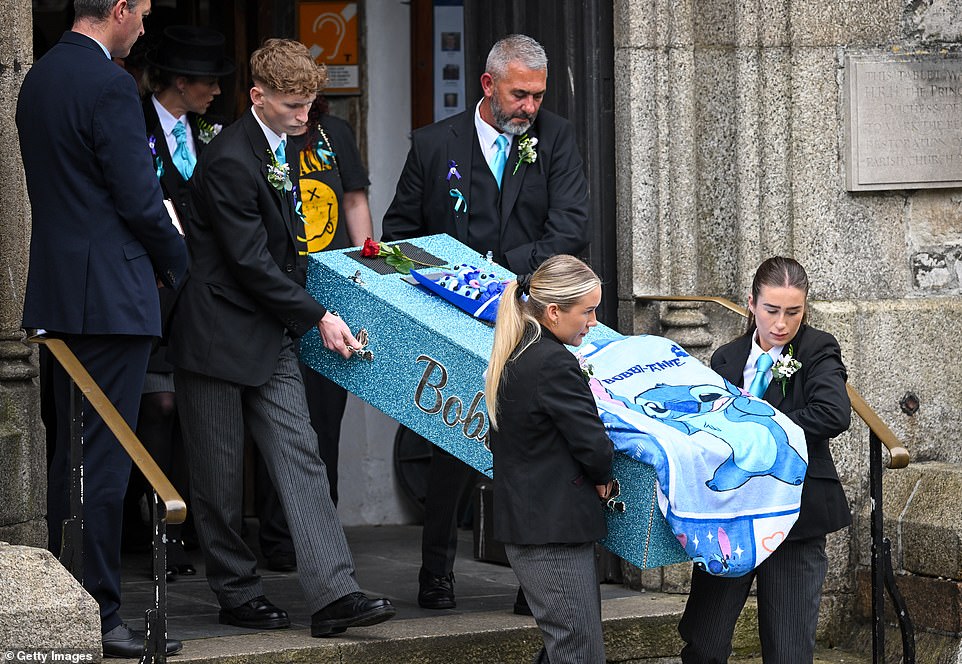 Pictured: The coffin carrying Bobbi-Anne McLeod leaves The Minster Church of St Andrew, on May 26, 2022 in Plymouth

The family asked mourners to be respectful and added: ‘We all stand together with Bobbi’s family at this really sad time.’

Numerous local celebrities and public figures paid tribute to Bobbi, with MP Luke Pollard calling it an ‘important day for Plymouth’ and a chance to say celebrate her life.

Spokespeople for Citybus, the Devon & Cornwall Police & Crime Commissioner and Together For Childhood Plymouth also posted messages of condolence on Twitter.

Hundreds of mourners gathered around the church prior to the ceremony to pay their respects, while Plymouth City Council tweeted: ‘May her light shine on. We will never forget her.’

During the sentencing of Ackland last week, Bobbi-Anne’s mother Donna said: ‘Bobbi was a beautiful girl who lit up our lives and the lives of everyone she ever met. She was kind, funny, and loyal. 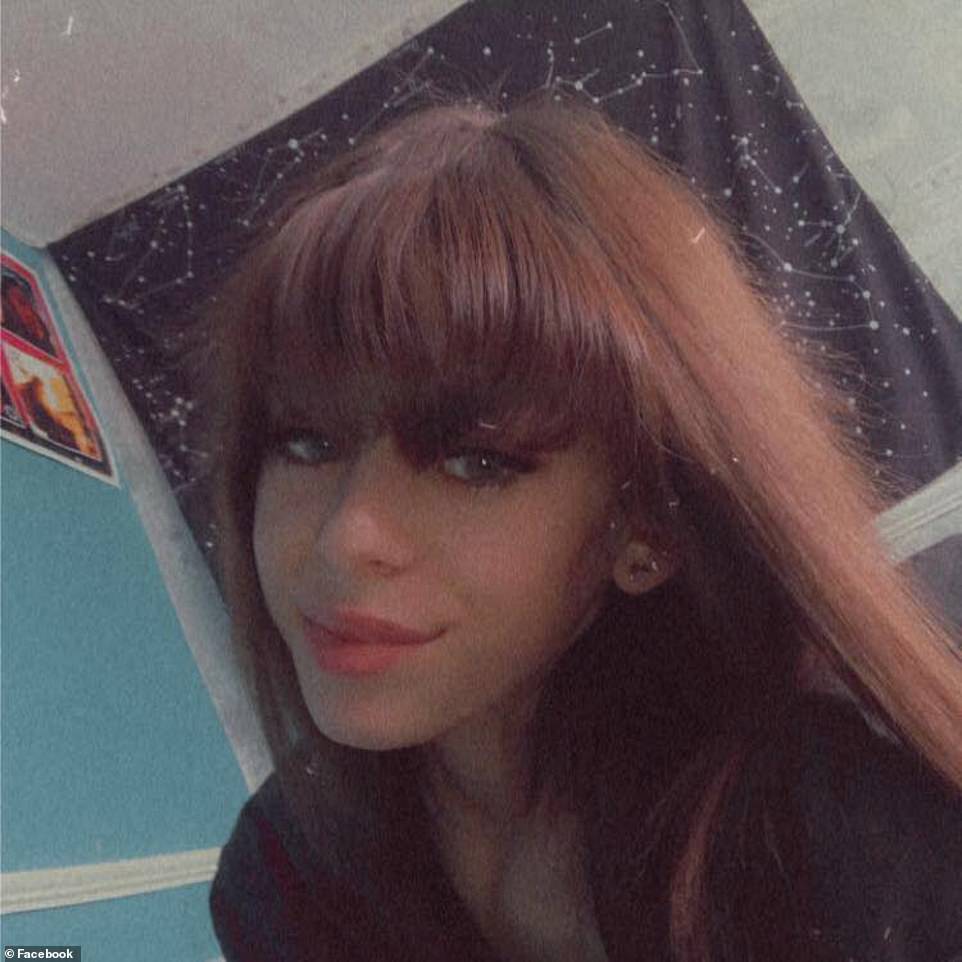 Police said at the time there was ‘no known link between the suspect and the victim’, who was 4’11’ tall and of slight build 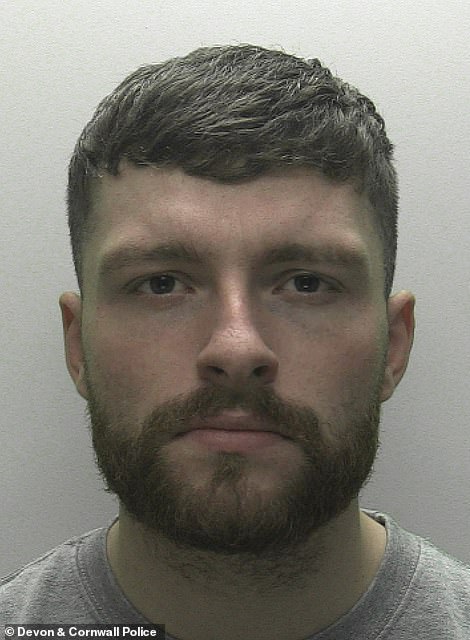 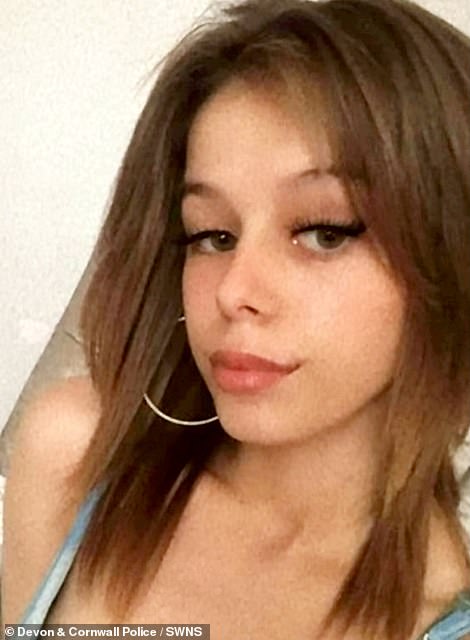 Murderer and his innocent victim: Cody Ackland, 24, snatched Bobbi-Anne McLeod, 18, off the street before killing her

‘She was the best daughter, the best sister, and the best friend to so many people. Everybody who knew Bobbi loved her. We have been robbed of our beautiful girl in the worst possible way and our lives will never be the same without her.

In chilling echoes of the method used by Bundy, Plymouth Crown Court heard Ackland struck Bobbi-Anne on the head with a claw hammer after seeing her waiting alone for a bus near her home.

He then abducted her and drove her to the Bellever Forest car park on Dartmoor when he continued his prolonged attack with the hammer that ended her life.

Ackland then took Bobbi-Anne’s body to Bovisand, where he stripped her and dumped her body in the woods.

The court heard what while her body lay undiscovered, Ackland continued to party with his friends and bandmates and was described as ‘happier than ever.’

But during the sentencing, Plymouth Crown Court heard the lead guitarist in local indie band Rakuda lived a chilling double life and had a morbid interest in a significant number of serial killers from around the world.

The court heard he particularly admired US killer Bundy whose kidnap and murder of young women bore similarities to Ackland’s crime.

Images of Bundy and the weapons he used were also among thousands of ‘disturbing’ pictures found on his phone.

Prosecutor Richard Posner said during the hearing: ‘His interest in the macabre presents as deep-rooted; a fascination with death, murder and murderers and the means to commit murder.

‘There are numerous images of the American serial killer Ted Bundy in his telephone and images of weapons he used to kill his victims.

‘Bundy approached his victims in public places and knocked them unconscious before killing them. It is not a coincidence that Bobbi-Anne McLeod met her fate the same way.’

Three days after the murder, Ackland turned himself in to police and revealed where he had disposed of Bobbi-Anne’s body.

Ackland, of Plymouth, pleaded guilty to murder at a hearing last month and was jailed for life with a minimum of 31 years.

Cutting class sizes in half could slash the effect on R-rate, SAGE documents find – The Sun