Victoria Police Chief Commissioner Shane Patton says the investigation into missing campers Russell Hill and Carol Clay has been one of the most complex and challenging investigations he’s ever been briefed on, as the questioning of a Caroline Springs man enters its third day.

Speaking on radio station 3AW on Thursday morning, Mr Patton said he was confident the investigation would be resolved “fairly soon”, three days after officers from the missing person’s squad took Greg Lynn, 55, into custody. No charges have been laid. 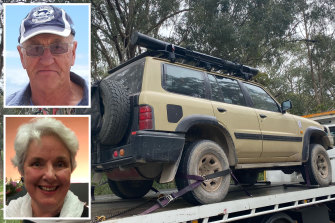 “You have to chase every rabbit down every rabbit hole. You can’t leave one lead. The professionalism that’s been displayed by [investigators] has been amazing,” Mr Patton said.

“This has been one of the most complex investigations that I’ve ever been briefed on.”

Mr Lynn was arrested in remote bushland north of Sale about 5.30pm on Monday and Mr Patton said it wasn’t uncommon for persons of interest in investigations to be held for questioning for consecutive days.

He said many factors could impact the length of time including the remoteness of an arrest location, a need for sleep and the complexity of questioning.

“I’m hopeful it will be resolved fairly soon. But I don’t want to preempt what the investigators will do,” he said.

“When you look at what they’ve been faced with over a period of time: eliminating suspects, eliminating vehicles, methodically trawling through a range of information. It has been an amazing investigation and very complex, which we are hopeful we will resolve.”

On Monday, police executed a search warrant of Mr Lynn’s family home soon after he left for a camping trip at Arbuckle Junction. There, he was arrested by members of the special operations group who descended into the remote campsite by helicopter.

On Wednesday, it was revealed the 55-year-old Caroline Springs man had previously been questioned by police over the disappearance of Mr Hill and Ms Clay during the early half of the missing person squad investigation. 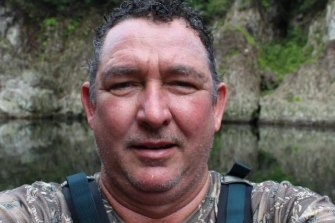 Mr Hill and Ms Clay vanished from the Wonnangatta Valley, in the state’s high country, in March last year shortly before their burnt campsite was discovered.

According to the Crimes Act 1958, Victoria Police can hold a person under arrest without charge for a “reasonable amount of time” but they then must be released unconditionally, released on bail or brought before a bail justice or magistrate.

Detectives seized a 4WD earlier this week as part of their investigation but a trailer remains unaccounted for.

Mr Patton said anyone who had purchased a silver-coloured trailer last year, sometime between March and July, should contact Crime Stoppers on 1800 333 000.

“If they can contact Crime Stoppers that’d be fantastic.”

Lengthy investigations aren’t a new thing for the force’s most senior officer. Mr Patton recalled working on an extensive investigation in the late 1980s and early 1990s that saw suspects in a string of aggravated burglaries and luxury car thefts questioned for consecutive days.

“It took us 12 months in investigations and when we got them it was a family of criminal offenders. You had to put some of them on ice if you like and so the interviews went on over … a couple of days,” he recalled.

“It can take quite a long period of time. It’s a matter of being fair to them, but it’s also taxing for the investigators to be trying to sift through all of the various pieces of evidence that they’ve been focusing on over 12 to 18 months.

“It can be quite taxing, but also quite exciting.”